Hi all! It's been a bit of a rollercoaster of a day, here. Our family dog, Paddy, has been ill for the past week. The vets said he had a dangerously low white blood count, but they didn't know why. After carrying out a lot of tests over the past few days, they told my parents this morning that there wasn't anything more they could do for him and that he should be put to sleep. Daddy didn't want to do that, and certainly not in the surgery, so argued with the vet to take the dog home.

We all expected that the dog was coming home to die, but this evening he has showed some small signs of improvement. It's not a full recovery, but things look a lot better than they did this morning. But I've been a bit of a mess! It's hard being so far away from my family when I know they're having a hard time. And it's hard, when you're a sobbing mess at work, to have to explain that it's because of a sick pet. But that's been today. I can only hope poor silly old Paddy gets better. He's a very special dog. I must say as well, that the vets were very kind. They refused to let my parents pay for anything except for the medication - even though they had brought in an ECG machine and specialist vets from another town, and kept Paddy in for a few days. With any luck, all that love and care will help Paddy to recover.

Anyway, I have a few days off work now and after all that emotion, they're needed! We're off to Cardiff in the morning and the mini holiday will be nice. But, October is coming to a close and I have one more Sew Red October make to share! Brace yourselves. It's more By Hand London, and more polka dots. I'm nothing if not totally predictable. I had an inspiration dress, too. This beauty from Vivien of Holloway. I can't get a good photo of it to put on the blog so you'll have to click the link, I'm afraid! As ever, I don't really have £110 to spare and I'd rather make my own if I can, so I did! 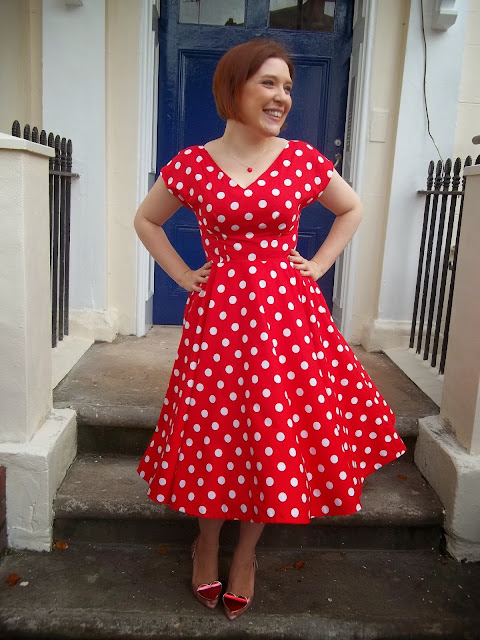 Soooo, I said this was another By Hand London dress, and it is! This is the Anna bodice again, but this time with the v-neck rather than the slash-neck. It looks like my inspiration dress but without the fear of accidental flashing that comes with a wrapover bodice. Hurrah! I really, really like how it looks. I added a circle skirt, which is hemmed with horsehair braid. It's quite long, but as this is not an everyday dress I don't mind. I'm wearing it with a petticoat here.

I get a fair few hits to the blog from people who are into petticoats - it seems specifically into spanking people with petticoats so I feel kind of weird posting this. But I also get some questions about petticoats suitable for these kinds of dresses, so whatever. Fetishists, knock yourselves out. The rest of you - this petticoat is by Hell Bunny and I got it here.

I don't often wear v-necks because I'm weirdly modest these days about showing any kind of cleavage. I became conscious of it when I was a teacher, and I suppose it stuck. But I like this. It's cute and flirty and I feel comfortable in it.

I think I might actually be about to sneeze in this photo!

Nothing to say about construction that I haven't already. Again, I used a lapped zip in the back because I like them. When I have used horsehair braid for hems before I have encased it in bias binding, but this time I stitched it to the outside of the hem, turned and gently pressed it, and slip-stitched it. It took ages, but I like hand-sewing so I found it quite enjoyable. I just love how kicky the braid makes the hem!

Going against my grumpy, not-a-joiner grumbling, I've really enjoyed taking part in Sew Red October, and I'm very pleased with my four dresses. It's been good to see how everyone interprets the brief and red is one of my favourite colours, even if I don't sew with it a great deal. Hell, I guess now I don't need to!

That's me for the evening. I'm pretty exhausted, and it's time for a glass of wine. Night!
Posted by Roisin Muldoon