I'm a steak and baked spud man myself, but Mrs Lewis likes to live on the culinary edge.

Afternoon all! It's another one of those Sunday afternoons where I'm curled up on the sofa with my laptop and a blanket and a cup of tea and it's lovely! As I mentioned previously, the past week at work has been pretty busy, and then yesterday I had a long day in London. Nic was speaking at the British Music Experience at the O2 in Greenwich, so naturally I wanted to be in the audience. This happened to coincide with Amy being in London so I spent the morning fabric shopping with her, Alison and Rehanon before hopping on the Jubilee Line down to Greenwich. Of course I totally neglected to take any photos, but it was a brilliant day. It was wonderful to see sewing friends and to buy some fabulous new fabric, and then it was really special to be at Nic's lecture. Afterwards we went to the South Bank for Mexican Food and cocktails with our friend Charlotte, had a night-time walk around Soho, then some dessert and wine before catching the train back up to Leamington. So, you can probably see why the laziness is something of a necessity today!

I haven't done any sewing this weekend, but I did finally manage to get a recent project photographed. A few weeks ago, I was offered the chance to review a fancy iron from Argos. This was good because I'm a bit hard on irons - I think seamstresses often are - and mine had started to leak. Like, quite severely leak unless it was turned up to the max. The timing was perfect and I swear I've never been so happy about shopping for an appliance! I chose this one: 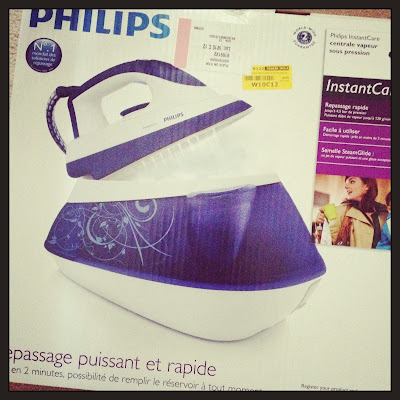 That's the Philips Instant Care Pressurised Steam Generator*. But my friend Fiona told me that stylists use this iron on photoshoots, and she described it as "the James Bond of irons" so I named it James Bond. I don't make a habit of naming my appliances, apart from my coffee maker. It's called Rusty Shackleford because it makes a noise like "sha-sha-SHA" when the coffee is ready. Anyway, I digress. Once I'd ordered James Bond, I decided that I needed to sew something special. I was daydreaming at work about making a spotty pencil dress - something like this one that I already have from ASOS: 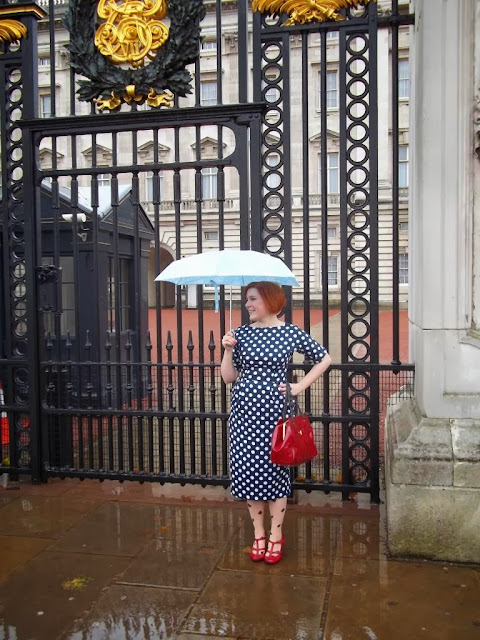 ASOS pencil dress - I bought this on ebay last year and wore it all last winter. I love it.

I bought a job-lot of 5 metres of red polka dot cotton lawn on ebay, which arrived the same day as James Bond so my first job was to wash the fabric and then to iron it. I don't love ironing - nobody does - but James Bond made that job really easy. I'm not going to say enjoyable because, duh, but it was really easy and quick. And the novelty of the whole thing meant that the giant pile of ironing that's been on the armchair in the living room for weeks got dealt with really quickly. Because the water is all in a separate reservoir the iron is really light and it doesn't leak, and you can control the steam really easily. THANK YOU, JAMES BOND THE IRON!

So, anyway, the dress. The shape of the ASOS inspiration dress is the same as the Rachel dress mash-up I did a couple of weeks ago, so I went with that again. I lengthened the sleeves, as per the instructions on the Anna sewalong on the By Hand London blog. The only other alteration I made to my previous version of this was to omit two of the darts on the skirt back. The woven fabric is a lot more stable than the stretch sateen I made my Rachel dress out of, and the skirt and bodice wouldn't fit together without that alteration. 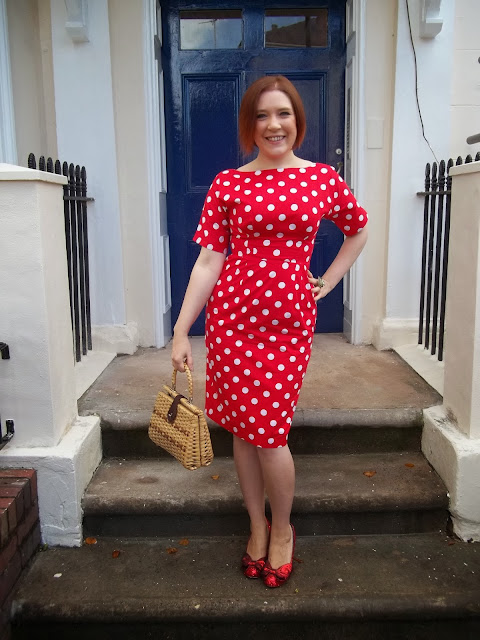 Down in the Street Below dress - By Hand London Anna bodice and Charlotte skirt, worn with Irregular Choice No Place Like Home shoes and vintage wicker handbag

I shortened the length of the skirt to the knee because I didn't want to put a vent in the back, and the woven fabric obviously doesn't have as much give to it as the stretch! As you can see, there isn't a lot of ease in this dress so I won't be wearing it on days when I have to run for the train or eat a big meal! I changed into something more slouchy when I got home, for the purposes of lounging on the sofa! But for a morning of dandering around the markets in town and taking in the unexpected late October sunshine it was grand, and I look forward to wearing it on days when I want to look smart but sassy.

I particularly like how the sleeves turned out. One of my favourite elements of the Anna bodice is the kimono sleeves and I think they look really pretty extended to this length. Unlike the sleeves on the ASOS dress, these aren't cuffed but it would be easy to add cuffs to them. Some cute cuffs would be simple enough to draft or I could even use the cuff pieces from New Look 6000 as as basis. I think this pattern mash-up would look great with the v-necked variation of the Anna bodice, but slash necklines are my favourite: 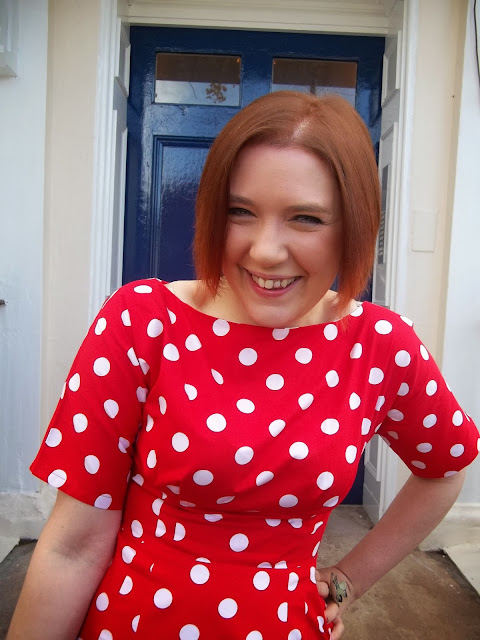 While I was making this dress, I was making another one out of the remaning polka dot fabric. I got fully into Sew Red October, it would seem, after all my crabbing earlier in the month about how I'm not a joiner. Working in an assembly-line fashion was the other excellent thing about James Bond the Iron - I was able to leave it switched on standby while I sewed. It was far less of a faff than my old iron, and much better at ironing all the darts and pleats in this dress! 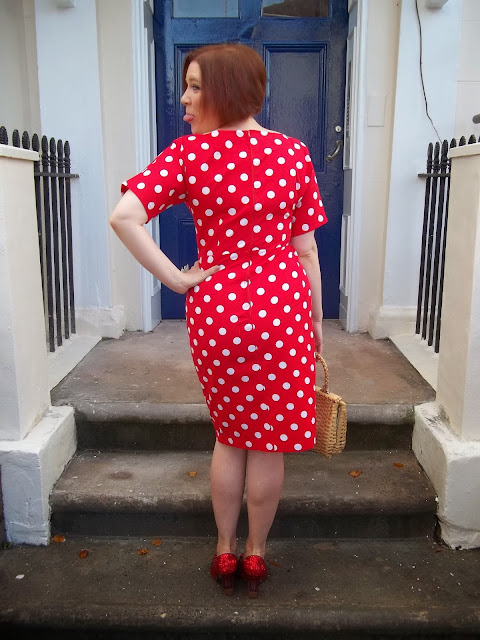 Back view, although I am standing a bit stupidly here. I gave this dress a lapped zip because it seemed to suit the style of the dress, and I prefer them.

I named the dress after a wonderful song by The Divine Comedy and because, well, that's where I get the photos for my blog. The lyrics gave me a little inspiration, as well... 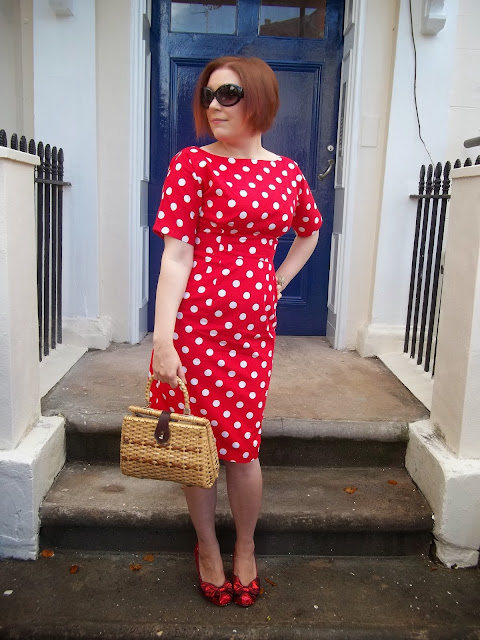 I think this dress would be perfect for someone who wanted to lead a life of elegance and danger... 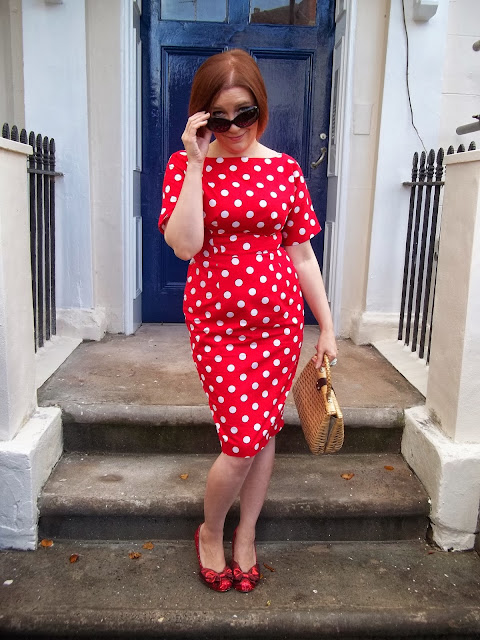 ...although, you know, maybe I already do. I certainly managed to meet my handsome stranger.

There will be more polka dot pencil dresses. I bought some pink polka dot cotton sateen on Goldhawk Road yesterday with the intention of making another one of these. I can never seem to make just one of anything! But I suppose that's the thing about knowing your style and what you like, and it makes it easy to get dressed in the morning and still enjoy some variety.

Now, I must be off. Nic and I have started watching Twin Peaks recently - to my shame, I'd never seen it before - and I'm quite hooked. I shall be back later in the week though, with another Sew Red October make! Until then: LEMON OUT.
Posted by Roisin Muldoon