Oh no, it wouldn't be on any maps. We're not exactly New York.

Hola all! It's been a while but things have been busy round here - I was away at the end of last week and then was ill with a virus that left me fit for little else other than prolonged napping. I'm back on form and back to work now though, so it's all good really.

Thank you all for your kind words and wishes for poor old Paddy. After Daddy brought him home from the vet he was still pretty poorly, but within a few days had amazingly picked up to almost his former self. He's still not a hundred percent, and in fact he's had a few seizures, which has been upsetting. Still, given that the vet was basically sending him home to die in the comfort of his own home, the recovery he's made has been astonishing. The vets were brilliant and they meant well when they recommended putting Paddy to sleep, but they were wrong and I'm obviously so glad that Daddy stood his ground and insisted on bringing Paddy home. This recovery might be short-lived, we don't know, but it's hard to express how relieved we all are to have him back.

Things have been on the up this week because as well as the good news about Paddy, my little sister had her baby this morning! He was delivered safely just before 9 this morning, weighing 9lb, and judging by the photos he's just adorable. I've booked my flights home for Christmas and I'm already ridiculously excited about getting home and meeting both new nephews.

So anyway - that's the craic there. Kelly has already requested a handmade jacket for her new son, so I'd best get on with some crafting for babies, I suppose! It'll be a bit of change from the usual run of endless dresses, eh?! If you read the By Hand London blog, you'll have seen that I was mentioned in their Anna sewalong round-up, under 'Outstanding Achievement' for my services to the Anna pattern. And guess what, you guys, I have another one to share. As with all my other versions, this one is definitely not going to be the last.

I actually made this ages ago and, on seeing the photos, wasn't sure if I liked it. I lopped a couple of inches off the length - turns out I'm getting into the idea of showing my knees, like, don't be all shocked there, Victorians! If I'm totally honest, I'm still not one hundred percent convinced about this dress - but let's see what you guys think... 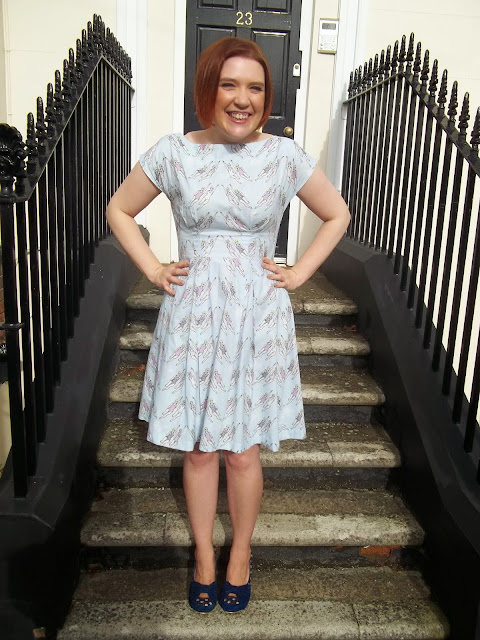 So, this is another By Hand hybrid. I teamed the bodice of Anna with kind of the skirt of Elisalex, which I turned into an a-line skirt instead of a tulip one. You can't quite see the box pleats in the skirt because of the way the lighting has washed out the print. Oh, and yes - this is more of the gorgeous retro swimmers fabric that I made my Beauty School Dropout dress from, but this time in blue rather than white. I loved the fabric so much but a white maxi dress with a thigh-high split isn't the most practical garment, and I wanted to find a way to make these gorgeous swimmers wearable. But weirdly, although the blue isn't paler than the white, it's more difficult to wear. Overall, the colours are more muted and I think it washes me out a wee bit. 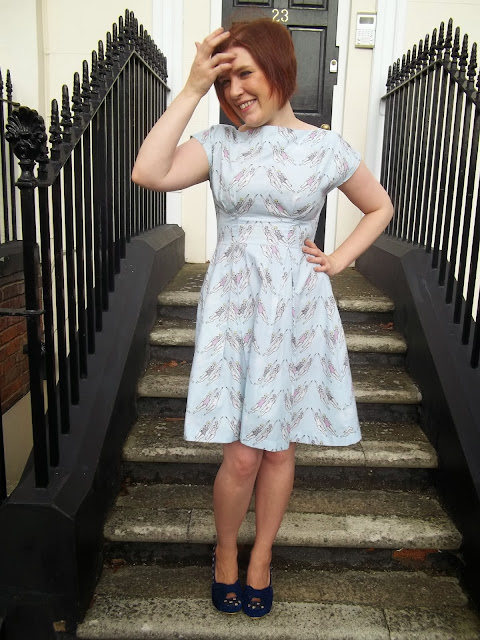 In fairness, I think this dress does look cute with my awesome polka-dot Irregular Choice heels, so there is that!

I am glad I took the skirt up, though. In general, I do prefer midi skirts but the long skirt on this one was just a bit too much. It's a bit more flirty now and it does look cute with a navy cardigan. I also love the shape of the skirt - the a-line shape works really well with the awesome box-pleats from Elisalex. It was an experiment, and not totally successful - but more successful than not. 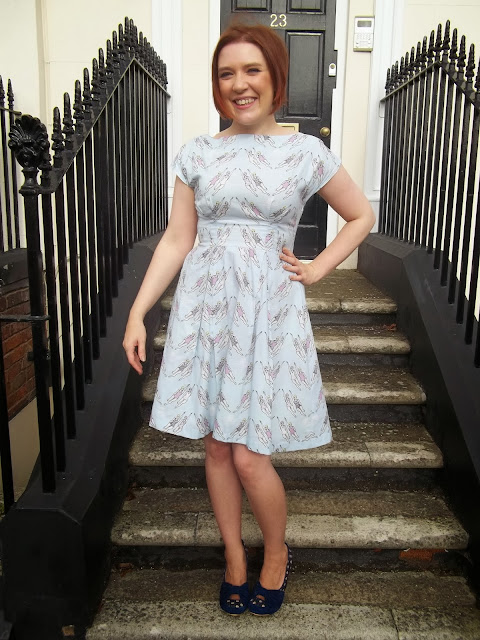 Anyhow, those photos were from a few weeks ago and I have worn the dress a couple of times since - sadly it's a bit too cold now though! Ah November, you're really spoiling us with this constant rain and dark skies. Thanks.

Nic and I managed to dodge most of the bad weather when we were in Cardiff, thankfully. We caught the train on Thursday morning and were in Cardiff by lunchtime. I'd never been to Wales before, and I was somewhat astounded by the beauty of the journey - particularly as we travelled along the Severn Estuary. When we arrived, Nic and I found our hotel and set about exploring. Visiting a new place always becomes a bit of a food holiday, and Cardiff was no different. If you're ever in the area, The New York Deli in High Street Arcade made the best sandwiches I've ever had in my life. I don't even like sandwiches. Cafe Citta on Church Street has a pizza that has potatoes on top. POTATO PIZZA. I can't even, it was incredible. And, as you can see, Nic thoroughly enjoyed the ales on offer in Zero Degrees on Westgate Street. 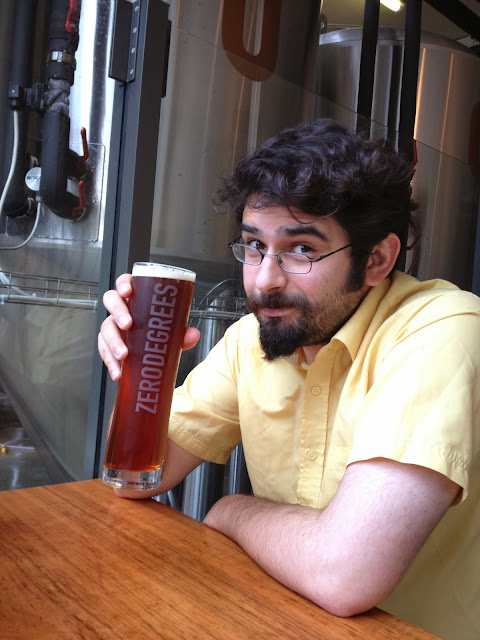 You should have seen his face when I bought him a second beer...

On Thursday afternoon, we walked down to Cardiff Bay. Nic's colleague Charlotte had suggested we do this, warning us that it was quite a long walk but saying "But you and Roisin do a lot of walking so it won't seem too bad to you!" It is quite a long walk, but a very nice one. We walked out Bute Street, which has lots of interesting pavement art. I was quite tickled by this piece... 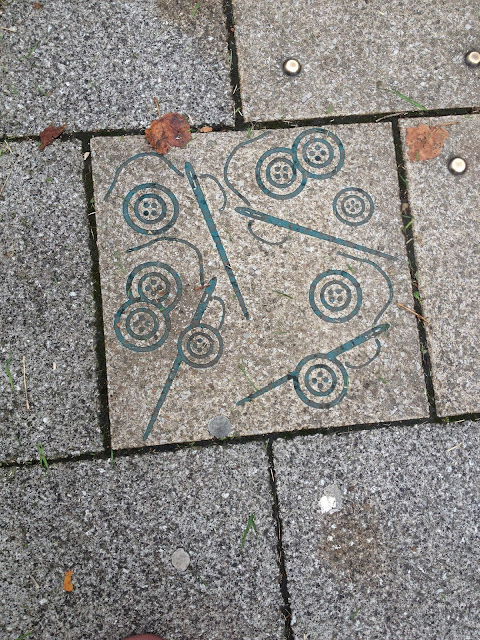 Cardiff Bay is amazing. We didn't go into the Millennium Centre but it's a truly awesome piece of architecture. 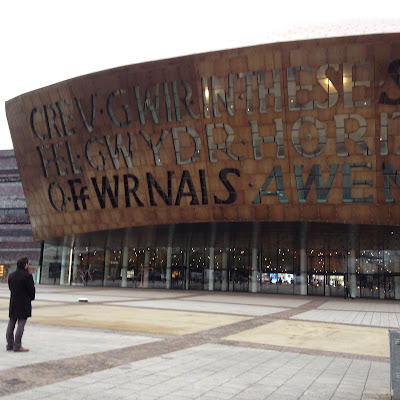 Nic outside the Millennium Centre

I had taken Nic to the Doctor Who Experience when it was in London a few years ago, but we were still curious about the purpose-built home for it in Cardiff. Not curious enough to pay into it again, mind you, but our visit to the gift shop was still pretty cool. I was ridiculously excited to meet Bessie... 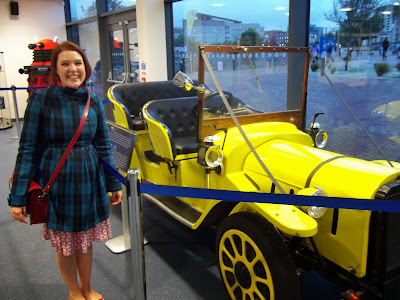 Here I am with Bessie. The REAL Bessie, which was super exciting. The Third Doctor and Jo Grant sat here! And the Brigadier, and Liz Shaw!

You see the Dalek behind me, there? That one was made out of Lego, and was pretty damn cool. But not as cool as this real-life moving one that was just scooting around the cafeteria... 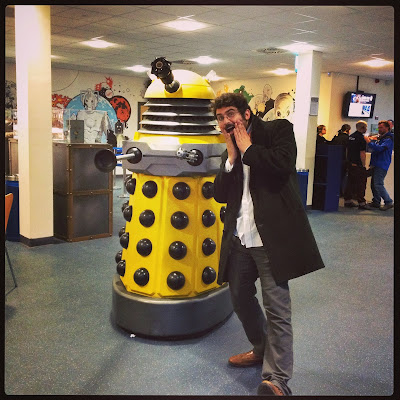 This was pretty funny. I went to the toilet and there were no Daleks around. When I came out of the ladies, I saw the Dalek and was like "Hey, oh there's a Dalek OH WAIT HOLY SHIT THAT THING IS MOVING FUUUUUUUUUCK!" I genuinely did have a moment of being frightened, before remembering that it's just a man in a fibreglass Dalek. It was so cool, though - and what was even better was seeing how all the children in the vicinity reacted. It was so sweet.

On Friday, I had the day to myself while Nic was at his conference. We were staying near to the city centre and I had a morning of pottering around by myself, elevenses and a rest in the hotel and then back out for the afternoon. The lovely Lara had very kindly got in touch when I mentioned I'd be in Cardiff and offered to show me around, so after lunch I met her and she took me to the fabric shops on City Road. This was after we'd made a pledge not to murder one another, of course! Once again, I was happily surprised by just how easy it is to get along with sewing folks - within moments it was like Lara and I were friends of old, which was brilliant. There are only a couple of fabric shops on City Road - and in fact, I'd already bought some fabric in Cardiff Market and at Cath Kidston - but there was more than enough to keep us occupied. Butterfly Fabrics on City Road was a particular highlight. Not only was their range of fabrics impressive, but the staff were so helpful and friendly and it was clear to see what a valued customer Lara was to them - Mr Butterfly Fabrics's face lit up when he came to serve her! It was like my much-loved Royal Fabrics in Leamington; just on a bigger scale.

Lara's partner collected us on City Road and dropped me off the the building were Nic was giving his talk - his keynote address, no less - and after that was over we headed back to the hotel to rest. I hadn't been feeling great anyway and a long day out in the cold sent me to bed early. We spent a few hours in Cardiff on Saturday morning before catching the train back to Leamington. Cardiff was wonderful - we'll definitely be back. There was so much I still wanted to see - especially Cardiff Castle, which seemed delightfully weird. The outer wall has lots of animals carved onto it, and the overall architecture is wonderfully eccentric. I need to visit. And I need more potato pizza. 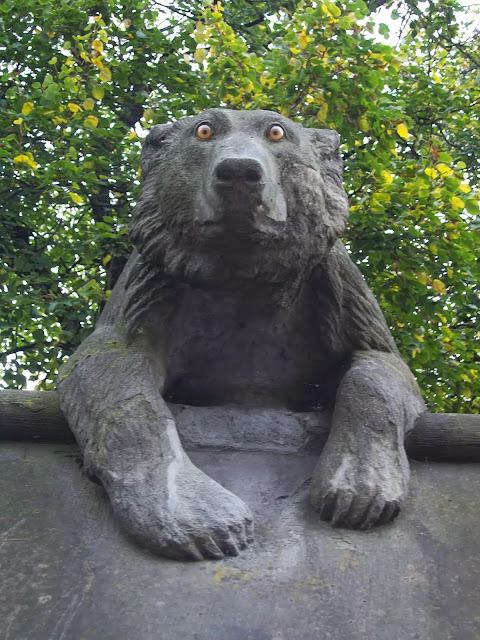 This bear was my favourite of the stone animals but there was also an anteater, a vulture and a totally awesome lynx. They didn't all have glass eyes, but I couldn't stop laughing at how shocked the eyes made this poor old bear look!

I'm going to leave you with one more photo of beautiful Cardiff, and then I'm off to drink something fizzy and alcoholic to celebrate the arrival of my beautiful new nephew. Catch you all later! 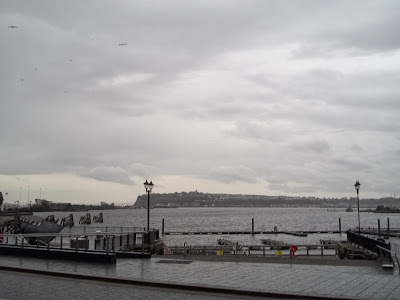 Cardiff Bay on a rainy Thursday evening. What could be more Welsh, eh?!
Posted by Roisin Muldoon