Yeeees! It's the Bucket Mouse! Thanks for calling!

Hey all WHAT UP. It's Friday night! I've had a funny week as Nic has been away, and work has been busy, and I had a random day off in the middle of it all. Time passes differently when I'm on my own. After last week, when I had barely any time alone at all, some solitude has been nice, but I'm ever so glad that I'll be reunited with my lovely fiance tomorrow.

I've been sewing a lot and since Nic has been away I have finished one dress and all but finished two more. Oh, and I've watched basically the entire miniseries of The Kennedys. This has proved to be compelling in a really crap way and I must admit that I'm watching it 85% for Katie Holmes's hair (the star of the show), 10% for the genuinely hilarious title sequence, and 5% because of the weird crush I've developed on Barry Pepper's weird face. So, now you know. I have a weakness for bad TV (oh hello, Homes Under The Hammer, I love you) but Nic has a far lower pain threshold for it, so it's good really that he's been away. I think he'd have vetoed The Kennedys. 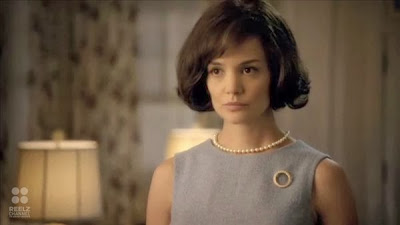 Katie Holmes. So pretty, so one-note. DAT HAIR, THO.

So that's the craic there anyway. As I said, I've done a fair bit of sewing although this evening I have elected to stay on the sofa with my blankets. My sewing machine is set up by the window and it's just too damn cold there.

As ever, I have a bit of a backlog of projects to show. Next up is another By Hand London Elisalex variation. I know right, change the record, but I swear I do something a little bit different each time. Anyway, I made this one using some fabric I bought the last time I was on Goldhawk Road, last month. I can't remember which one of the shops I bought it from, but I basically had to buy it because the print is so weird... 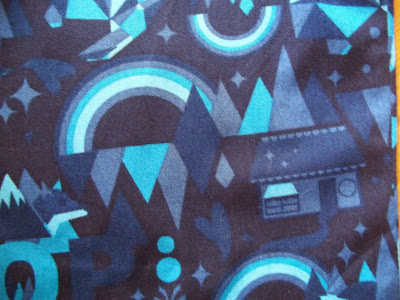 It features snowy mountains, foxes, rainbows, strange little cottages, stars, birds, hearts and the word 'POP'. The print runs both ways, and the fabric was 60 inches wide. It also came in a red colourway, but in red it seemed like that odd and charming landscape was steeped in blood. Seriously. That shit went from pleasing in a Narnia way to horror movie chic. 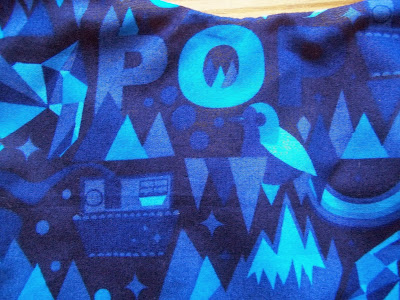 I seriously bought the fabric because it says POP on it. What is that all about, FFS?! I think it's almost subtle enough not to be stupid, but it makes me laugh all the same.

Anyway, I wanted to make another Elisalex dress with a pleated skirt, much like my La Chouette and Dolly Holiday dresses. I've been wearing those a fair bit recently. I love the sleeves. I used the skirt pieces from Simplicity 2444 because, duh. I love that pattern and they fit so nicely together. Enough jibba jabba though, here's the dress: 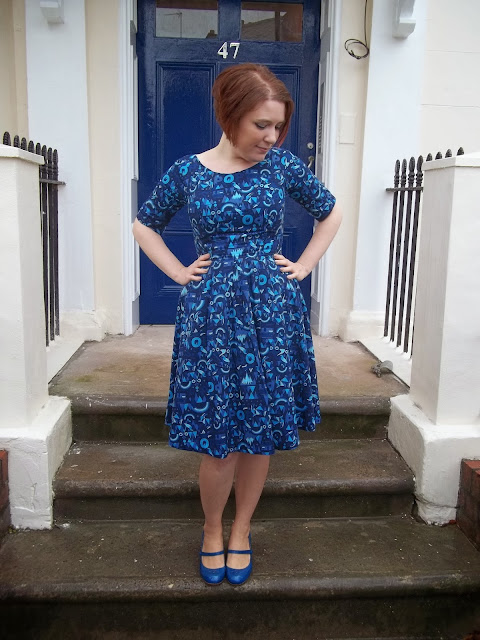 My hair looks faintly ridic here, I know. Especially after Joey Potter Bouvier Kennedy's outstanding hurrs up above but I'd had my hair cut that morning so it's got a shitload of hairspray in it, and then I got rained on. Standard.

After doing the FBA on this bodice, I needed to do a little bit of work on the sleeves to get them to fit better. I lowered the armholes by about 5/8 of an inch and redrew the sleeves to compensate. It's still not perfect but it is marginally better than before, and I was happy enough to take the risk on this fabric. I figured I could always detach the sleeves if I needed to. 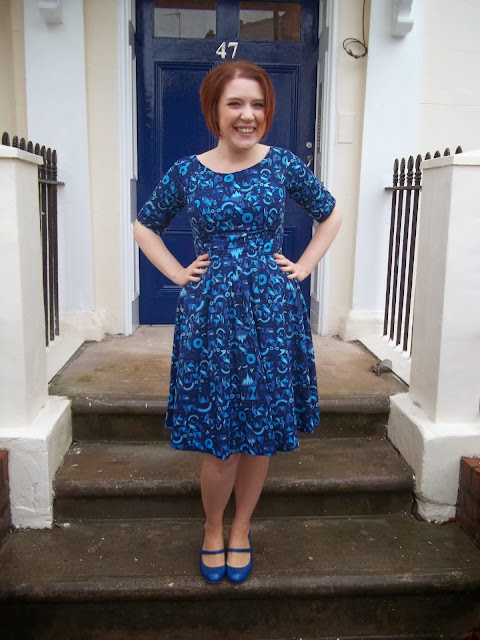 It was really starting to rain by this stage.

So, that's the Kingdom Valley dress. I've worn it a few times since I made it and, as has become commonplace with me, I like it more each time I wear it. And fuck it, 'POP' always makes me laugh. I'm a twat, I know.

I called the dress the Kingdom Valley dress because the other thing that made me buy the fabric was how much it reminded me of a computer game I played in primary school. I'm a child of the 80s, and my small primary school in rural Northern Ireland had three BBC Acorn computers and one dot matrix printer. Anyway, there were a couple of games and one of them was Twin Kingdom Valley. It was a role playing game with a puzzle-solving aspect. It had a similar appeal to the things I enjoyed as I got a bit older, like Knightmare and The Legend of Zelda. And I mean, you know, the GRAPHICS:

I was only a little bit older when I got into gaming properly. My brother had a Sega Master System, which had Alex Kidd in Miracle World built into the console. He got it for Christmas and as a family we were all totally hooked on watching him play it. I know, but you had to make your own craic in them days. I did say I grew up in rural Northern Ireland, right? 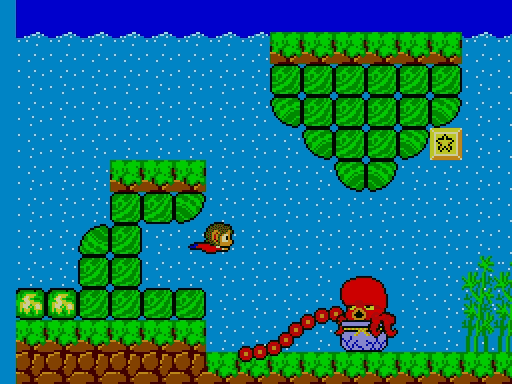 I loved this bit in the game. Firstly, check out the mouth on that octopus. Talk about bitchy resting face. Alex was a bad-ass too, though. To get past this dude, you had to hide out and punch his tentacles off. Ever since then, I've sort of wanted to use that as a threat. I'LL PUNCH YER TENTACLES OFF, MATE. I don't think my brother ever got to the end of Alex Kidd in Miracle World. You couldn't save it, and you only got three lives, and it was really long. Still, it was good entertainment. I think those graphics look pretty good even now. I would definitely wear a dress with this print on it.

My first proper gaming love was The Legend of Zelda series. My auntie Tish had The Legend of Zelda: Link's Awakening for the Gameboy, and when she got stuck a little way into it, she gave me her copy. I still so vividly remember how instantly enthralled I was by it. I loved the world of Koholint Island and it was so exciting to explore it. 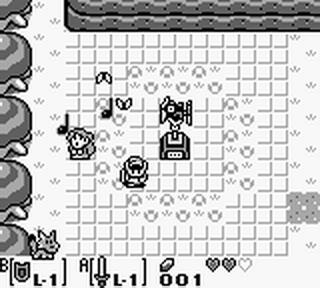 I loved all of the other Legend of Zelda games I played after that, but this one was really special. It was really thrilling to get to the top of Mount Tamarach and very moving to wake the Wind Fish and save the island from the Nightmare. In fact, I get a little bit emotional thinking about it even now!

When I was at university, and when I was living in a shared house in my early 20s, we bought a PS2. In the summer between finishing my PGCE and starting my first teaching job, I got totally hooked on Grand Theft Auto: San Andreas. It was a rainy summer and I was on my own a lot, so I lost a lot of my holiday to that game. My then-boyfriend would come home from work to find I'd been playing it for basically 8 hours straight that my achievement for that day had been torching a rival gang member's house, or something. At around the same time, my housemate and I became a bit obsessed with Doctor Robotnik's Mean Bean Machine. This was a lot less violent, but I think a lot of our enjoyment came from screaming at the opponents the game programmed against us. This guy here was a particular enemy: 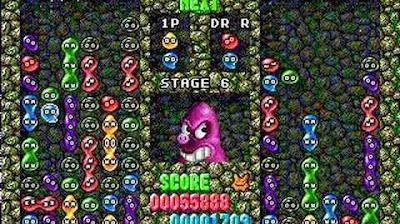 It took us ages to beat this guy. AGES. When we did, I paused the game so I could take a photo of our triumph. SERIOUSLY. Me and my housemate C, we were so cool.

Since I moved to Leamington, I haven't had a games console in the house. Gaming now means the occasional game of Scrabble. I miss it sometimes. It stimulated a mental and emotional part of me that isn't moved in quite the same way by anything else. Maybe I just need to bring my old Gameboy back with my after Christmas.

You've hung in there listening to me wittering on about video games. I'm not all about the dresses! I have a bottle of wine chilling in the fridge and my bed is calling to me now, though. I'm going to take a glass of wine to bed and investigate the possibility of downloading some game emulators to my phone. 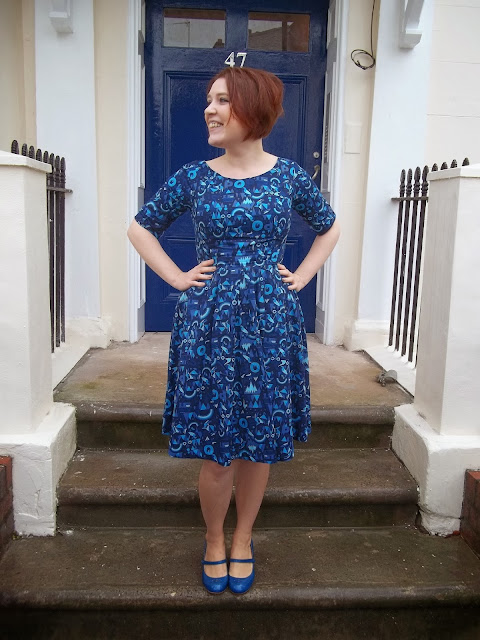 One last photo. It's not that this is a good photo, but it gave me the giggles. I look so much like my mum in this one, I can't even. Also my hair looks a lot less crap than in the other ones.

So, from me, Bagpuss and my glass of wine - Happy Friday, pups! Goodnight!
Posted by Roisin Muldoon