Me, I have simple tastes. I like to kill my enemy, take their gold and enjoy their women.

OH, hello! I hope you're all well this Sunday evening. I'm not. I mean, nothing serious, but a head-cold and enough to mean that I've spent the day on the sofa in my pyjamas, watching back-to-back episodes of Sex and the City and Law & Order. That's a lot of Chris Noth, right?! But it's all good, because we have a lovely pie from the Cotswold Pudding and Pie Company for dinner, and I only have five days left of work. Can't be bad.

Anyway, that's the craic there. As you can imagine, I've been having a very low-key weekend. Nic and I got out into yesterday's beautiful sunshine to do some Christmas shopping and to have a delicious pub lunch at the Star and Garter, before coming home to watch Inspector Morse and eat homemade vegetarian enchiladas. Hibernation FTW. As such, I really have nothing exciting to write about this evening! The highlight of my week, apart from all of the DVDs, was my staff Christmas meal on Thursday. Half of my team are based in London and although we've usually held staff get-togethers in the midlands, this time round we all went to London. We had a meeting in the afternoon which was - well, it was as exciting as these things usually are. The meeting room we were in did have an awesome mural, though...of a car park. It's not the car park belonging to that building, either, As far as I can make out, it's just a random car park. We had champagne to celebrate a good year and then everyone got their Secret Santa gift. I still haven't worked out who my benefactor was, but whoever it was did brilliantly, giving me some Matryoshka measuring cups and a beautiful Matryoshka brooch. We had our meal in a restaurant in St James's Park, and it was really lovely to watch twilight descend over the park. It was a good day. I was glad of having Friday off work though as drinking in the daytime meant I had a horrible headache for most of Friday. Totally worth it, though.

As I'm still catching up on blogging about recent makes, here's one from a few weeks ago. I bought this  great Makower fabric when Nic and I were in Cardiff at the beginning of November. It's kitcshy as you like, but of course I couldn't resist the print: 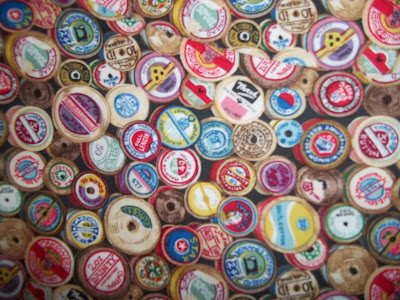 Ah! That photo is quite blurred, sorry! The fabric is by Makower and the print is of spools of cotton. I bought it from Butterfly Fabrics on City Road in Cardiff, but I expect it's pretty widely available and I've seen it for sale at Fabric HQ recently. It's a quilting cotton, but reasonably lightweight with some drape to it. I think it's pretty cute! Anyway, I wanted to sew something with sleeves, so went for my old faithful Elisalex variation. And so you have it, the Spoolettes dress: 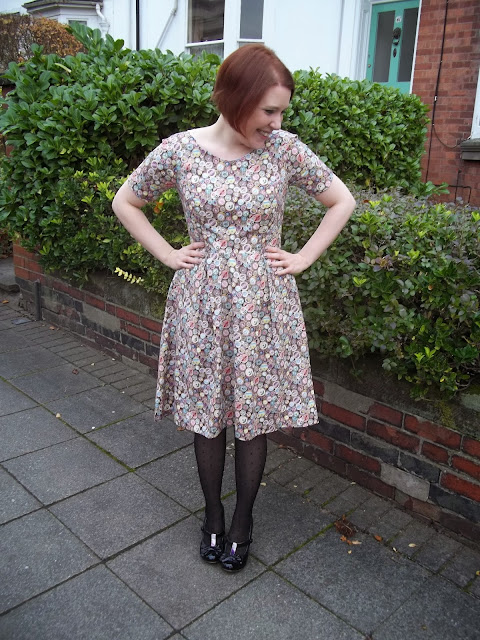 Spoolettes dress - By Hand London Elisalex with a modified skirt, worn here with polka dot tights from Falke and Escape Boutique bow-front heels. I have an embarrassing amount of shoes with bows on them.

I modified the skirt pieces on this dress by turning it from a tulip to an a-line skirt, because I didn't think the fabric had enough body to hold that lovely tulip shape. The box-pleats are sort of lost in the very busy fabric, but I think that's fine. 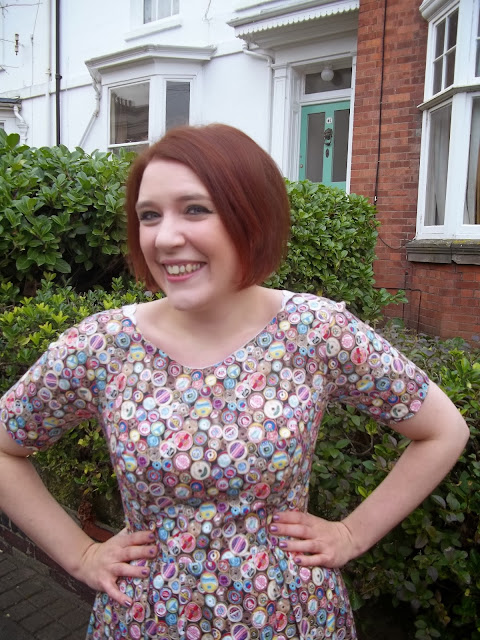 I had a slight disaster when pinking the waist seam to reduce the bulk, in that I cut a hole in the top of the skirt! It was irritating, but not fatal, and I unpicked the skirt and reattached it with the hole caught up into the seam allowance. It's the kind of error that would have really upset me in my early days of sewing, but which now just makes me shrug and get on with it. I'm not sure if my solution was the best one, but it seemed to work. I'm just glad that I don't wig out over this stuff any more. It makes life easier. 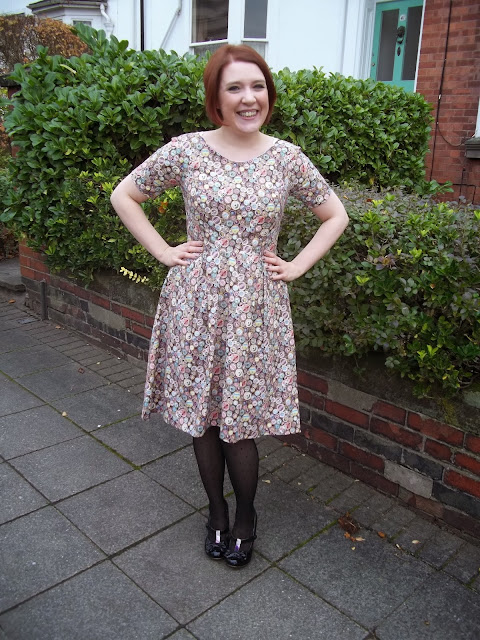 This is another dress that looks fine in the photos but which is now slightly too big, but after Oona's suggestion on my last post I've put it through the washing machine on a scalding wash to shrink it ever so slightly. It's a bit of a cautionary tale about measuring yourself more regularly. Not that I'm complaining or anything, but after a very busy few months I'm now a bit smaller all over, and there are a few favourite patterns that I'll have to re-trace as a result. This is one of them. And after all my hard work on that FBA, as well! Heh. Seriously though, I know that sounds like a humblebrag and I really don't mean it that way. I just need to remember that it's worth taking measurements more frequently than I have been. Bad, lazy seamstress etc. 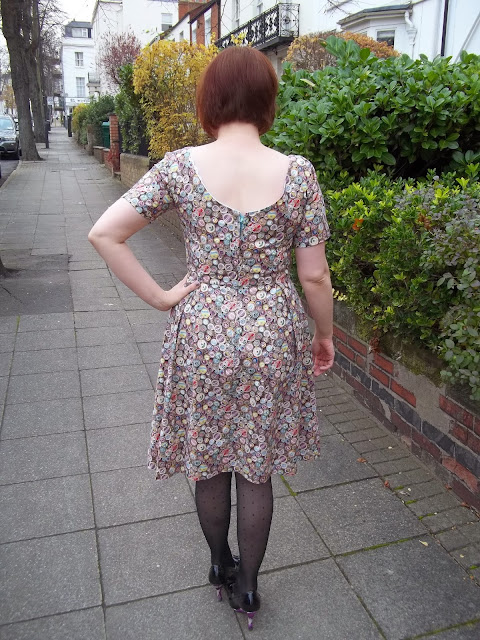 Back view. I don't normally include these although I nearly always get Nic to take photos. They look weird, which is why I usually balk at posting them! But someone did email me recently and specifically ask for them - and no, not in a weird cardigan fetish guy way. I think. In any case, one of the lovely design features of the Elisalex dress is the scooped back, so here it is!

I wore this dress to work a few weeks ago, just after I'd finished it. I was in a meeting all day, and at about 5 o'clock my back was getting pretty itchy and I went to scratch it, only to find that there was still a pin in the zip! This is not the first time something like that has happened, in fairness, but previously it's been an errant pin in a hem. Not, you know, in the bodice! I fished it out and started cracking up, which was fine except for the fact that it was my first meeting with my new line manager. Ooops! Luckily I think he thought it charming rather than deciding that I'm a complete loon, but only time will tell I suppose. In any case, I do think he was impressed that I'd made the dress myself, so there was that. It's probably just as well that he knows now that I'm a complete dick, anyway. I confirmed that fact in the team meeting on Thursday, when I spilled champagne all down my dress. KEEPING IT CLASSY. Luckily champagne doesn't stain, because that was a new dress as well.

So that's all the craic with me anyway. I'm aware that I might be seeming less than enthusiastic about this dress, which is unfair - I think it's really cute - but I'm somewhat off my game at the moment. I think I need to go to bed and watch some more of Rome. Nic and I are burning through S2 now, and it's good oul craic. Marc Antony is cracking me up, and my crush on Titus Pullo is growing with each episode: 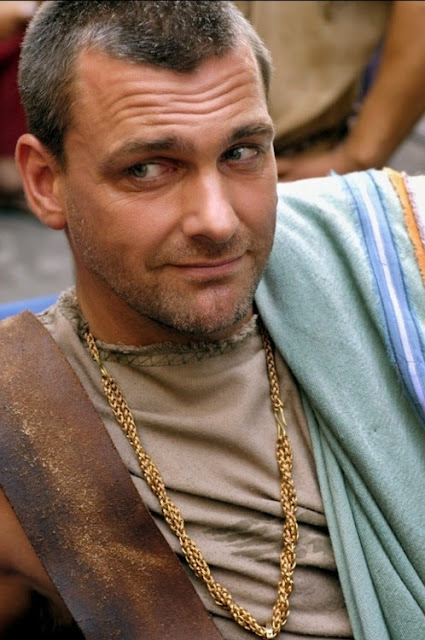 He's lovely, isn't he. Like Pacey, but Irish. I still spend most of every episode exclaiming how glad I am not to be a Roman, though. 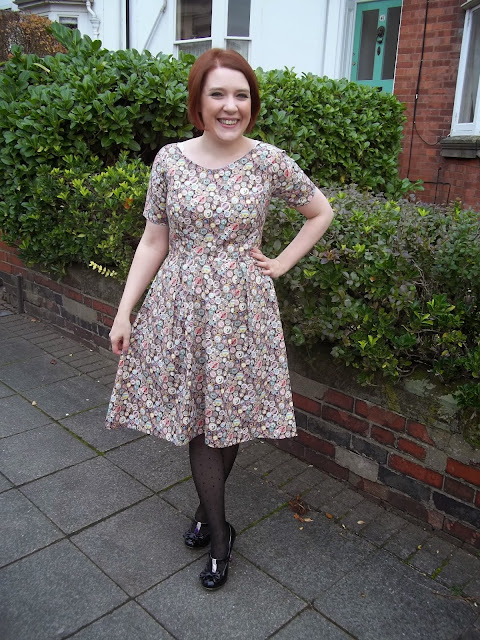 SO GLAD NOT TO BE A ROMAN

With that, I shall say valete, citizens! Until next time.
Posted by Roisin Muldoon