I look like the mother of a solid gold dancer.

Woo! Hello there! How's your week going? Mine is grand - I'm having a busy one, but that's nothing new. It's all good, though. Life is good! I'm spending a lot of it on the train at the moment but I have my knitting and a few good books to keep me occupied so I can't complain really.

I don't have a great deal of time to sew at the moment, but I'm trying to make time where I can. I have managed to complete two projects so far since coming back after Christmas though, so I guess I'm still doing okay! I sewed the first one the weekend that I came back to Leamington. I was stressed and tired and feeling quite sad for various reasons, so I wanted to sew something bright and happy and cheerful. I met up with Sarah for coffee and a chat and she came fabric shopping with me - after a long chat with her and with some pretty fabric in my bag I felt a lot better.

As I was feeling a bit blue I wanted to sew something simple and fun so I stuck with a classic and went for another variation on By Hand London's Anna dress. Try not to die of shock, mmkay? I did have a specific variation in mind, and it was inspired by the new pattern from Christine Haynes, the Emery dress. Now, don't take me up wrong. I'm not trying to knock off an independent designer - far from it - but I wanted to check out the style to see if the pattern is worth me investing in. Pinkie swear it. So, I decided to substitute Anna's seamed skirt with a gathered one, and to lengthen the sleeves. And here it is: 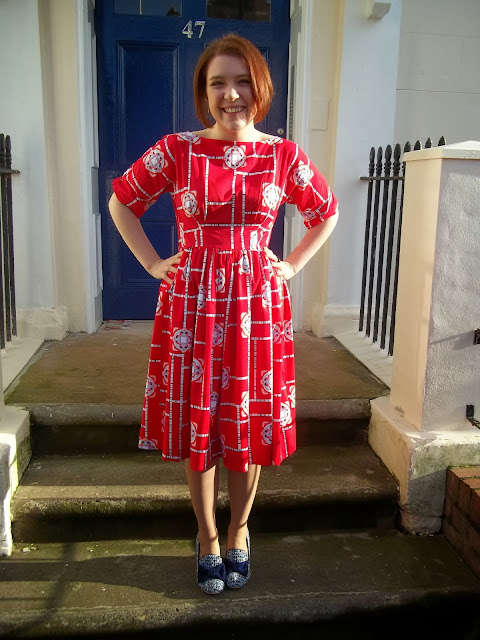 The fabric is fabulous. It's from the 'Paintbox' collection by Cynthia Rowley for Michael Miller and the print is called 'Graphic Floral.' In my 2013 round-up post, Lizzy commented that she thought the dresses I termed as 'fails' were possibly not my style because of the small prints, and she was right. I like a good bold print, and this really falls into that category, doesn't it?

Anyway, this came together with no bother. I cut the sleeves a little bit wider than I intended and, if I'm being brutally honest, it's a little big all over. I didn't prewash the fabric because I just wanted to get down to sewing this baby, so a turn through the hot wash will shrink this dress up a little bit but since then, I measured myself again. It's one of the unfortunate downsides of having lost weight and being lazy. I'm going to have to retrace my favourite patterns. Ah well, it could be worse. 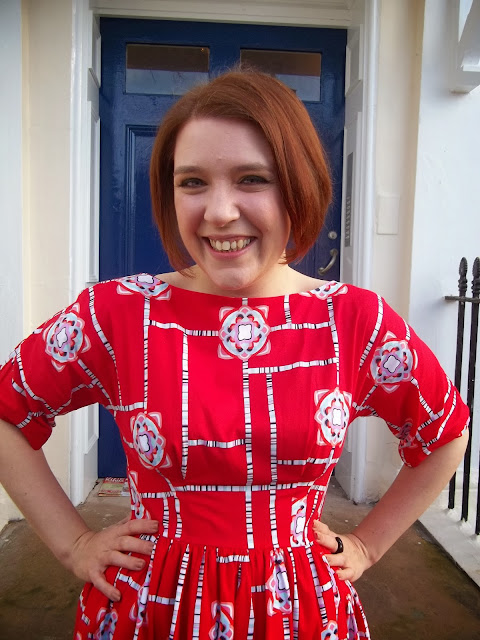 Here's the print close-up. I didn't think there was going to be a way to avoid those big floral motifs being bullseyes and I didn't quite side-step that, but that's okay. Also, I think I will take the sleeves up slightly - they're a bit crumpled here from being caught in my cardigan, and I can tell that's going to annoy me. But those are just niggles really - I love the fabric and I love the shape of this dress, and I'm pretty happy overall. And you know what? Sewing it really did help to make me feel better.

I wore this on Saturday when Nic and I went out to do a bit of shopping and have lunch. It was my first opportunity to wear some shoes I bought when I was at home over Christmas: 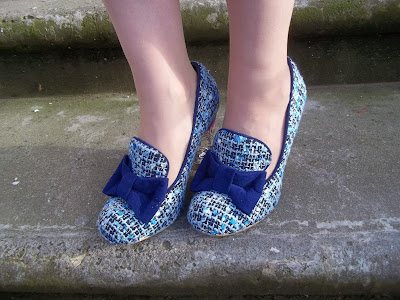 There is some navy in the print of the dress and I wanted to wear my shoes, so I decided to pull the whole look together with a navy cardigan. And that went well... 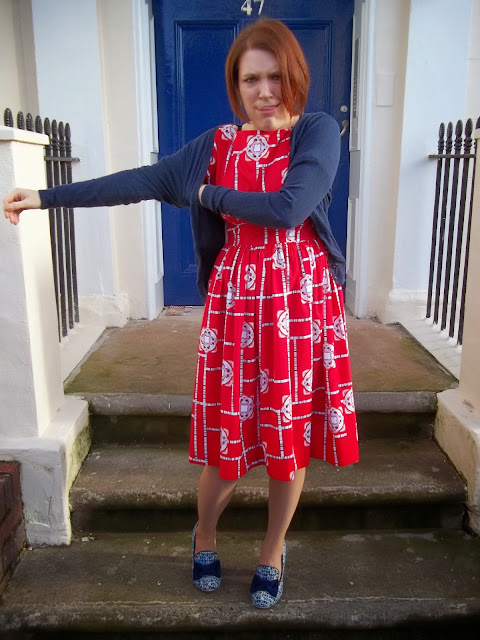 This is... surprisingly difficult. 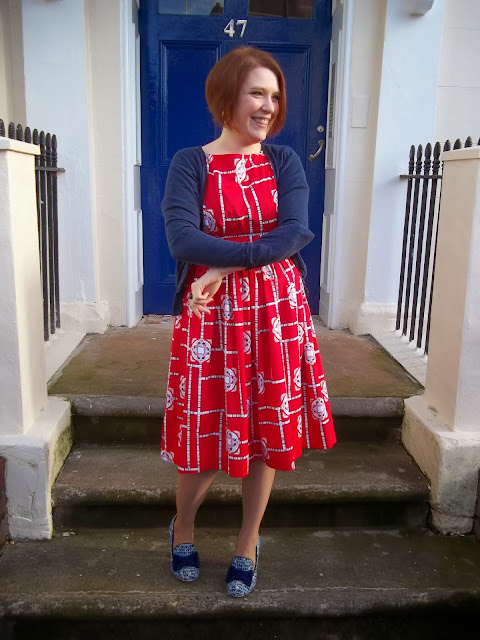 I have a newfound respect for people who put clothes on for a living - models, and the people who dress mannequins in shops 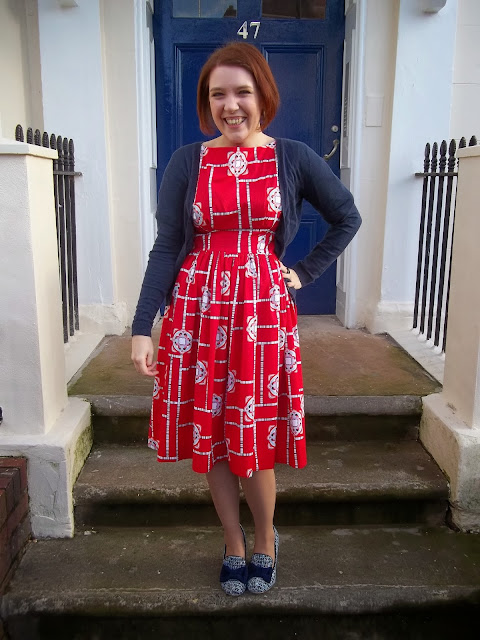 Yeah, I do need to shorten those sleeves a little bit, eh? But that's fine. And I promise this little display is not my everyday reality. I am reasonably competent at getting myself dressed by now.

After finishing our errands in town on Saturday, Nic and I seized the opportunity to have lunch in a new restaurant on Bedford Street. It's a tiny little Japanese restaurant called Aura-Daze and it opened late last year, but we hadn't had a chance to visit before now. We were lucky to get a table - the restaurant is so small that it seats a maximum of 10-12, and while we were there we saw lots of people leave disappointed at not being able to get a seat. It's a family-run business - while the chef was making the sushi or whatever in the open kitchen, his wife acted as Maitre'd. She was charm personified and the motto on the wall that read "Enter as strangers - Leave as friends" felt very apt. We had a leisurely lunch which was curtailed by an accident - the chef cut his hand and had to close the kitchen. Even this calamity was dealt with with charm, as the chef's wife was so clearly delighted when she jokingly cried, "Is there a doctor in the house?" and there was! A medical doctor, that is - although there was of course a doctor of film studies also. I'm already looking forward to going back. Leamington has so many chain restaurants, and they're fine in their place, but it's good to see an independent restaurant doing well and surviving what is otherwise a tough month. Also, I'm glad to have a place to get noodles - ever since Wagamama on the parade were such dicks about Nic's vegetarian pad thai containing chicken, I haven't wanted to go back. Also, seeing your food being prepared in front of you beats being told, "I've checked the food bag for this meal, sir, and I'm confident there was no chicken in it.' Food bag? BOKE. Smell ya later, Wagamama.

Anyway, that was Saturday. And that's my new dress! 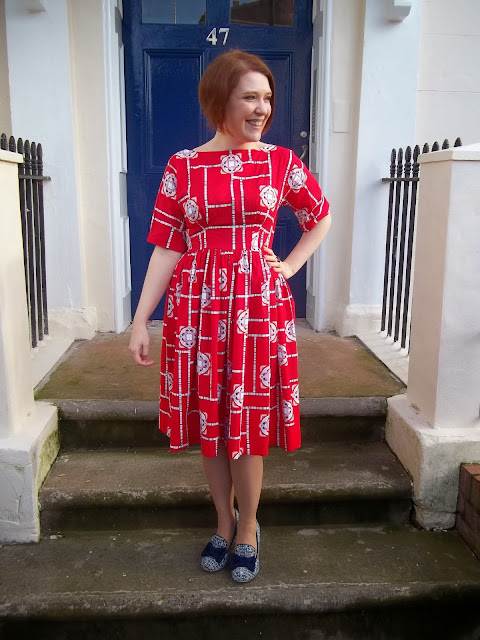 I called it the Help dress, because sewing it helped me. But mainly because, while I was doing the last bits of handsewing on it, Nic and I watched The Help. I'd read the book some time before and had enjoyed it, and was curious to see the film. Naturally the beautiful 60s fashions were also enticing, and of course I fell in love with this dress worn by horrible, bitchy old Hilly Holbrook: 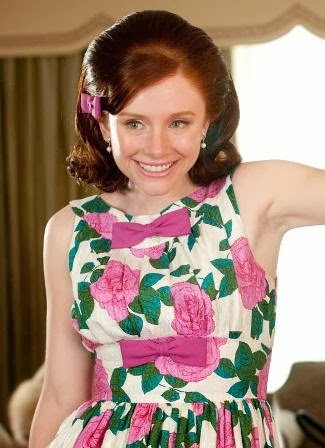 The style and shape are so similar to Chantilly by Colette Patterns, which I already own and which I love. But that FABRIC. Damn. Any of you eagle-eyed readers out there have any hot tips on where I could find a large scale rose print such as this one? I promise not to pull a Hilly on y'all.

Right. It's dinner time up in here. Night all!
Posted by Roisin Muldoon