In the small event that occurs, just crumple two pieces of aluminum foil and stuff them in your undershorts. It defeats their sensor rays.

Hello lovelies! Well, I am having quite the week - quite the month. I know I have already complained talked at some length about my working pattern over the past few weeks, but I am feeling a bit burned out this evening after another full-day meeting in a basement in London. I have another one tomorrow and, by the end of this week I will have clocked up 36 hours this month on the train to and from London. That's nearly a working week! It won't be always be this intense, and I expect to be riding the rails a bit less in February and March,  but today it did get to me a little bit.

So, as you might expect, my sewing has been basically curtailed because, when I have been at home, I've been too tired to even want to look at my sewing machine! I did go fabric shopping on Saturday with the Spoolettes - this was a joy as ever, and my stash is looking nice and plump as a result. Also this week I finished a scarf I started knitting for Nic earlier this month, from the leftover yarn from my Miette cardigan. That's been good, actually, because I was able to knit quite a lot of it in bed. That has suited my current schedule just fine.

I did a bit of fabric shopping earlier in the month and had a bit of a splurge at Fancy Moon. On a tired and fragile afternoon, I had nearly bought this gorgeous Limb dress from 52 Greek Street: 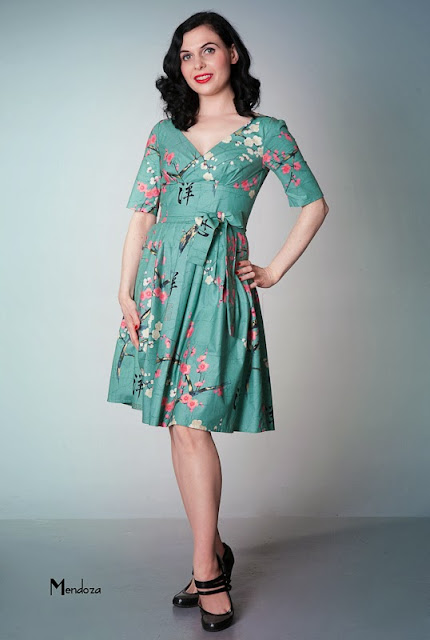 It's much cuter in real life - it looks a bit wrinkled and sad here. Anyway, instead of dropping £100 on the dress, I bought two metres of the fabric, which is 'Golden Garden' by Alexander Henry. Where I have mocked up one of these dresses before - the Dolly Holiday dress - I used a combination of the bodice from the Elisalex dress and a pleated skirt, so I decided to do that again. Now, after the Help dress coming out a little bit big, I took my measurements again and re-traced the Elisalex bodice. To my surprise, the new measurements suggested I should trace two sizes smaller than I had previously. That didn't seem right to me, so I traced one size smaller. And, you know what? IT'S TOO FUCKING BIG. DERP. 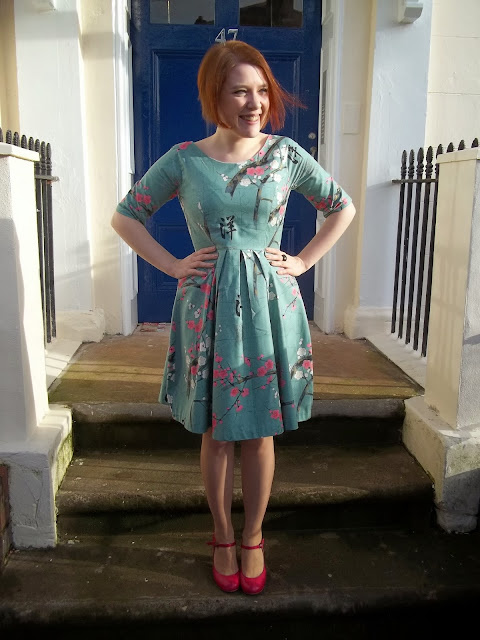 It's not massively too big, but it is too big. It's hard to tell in these photos but it's too big at the waist and around the bust - I know this is TMI, but I'm wearing a padded bra to make it look like it's not too big. I'll be able to shrink it up a little bit and it'll be fine, but I am a bit annoyed with myself. I should have done a toile, really, and I should have trusted the measurements. It's a funny thing, really. I know I have lost weight in the last few months, and my measurements support that. All the same, I find it really hard to have an accurate idea of what my body actually looks like. I don't think I look any different now to how I did this time last year, which I suppose is what accounts for my reluctance to trust my measuring tape. 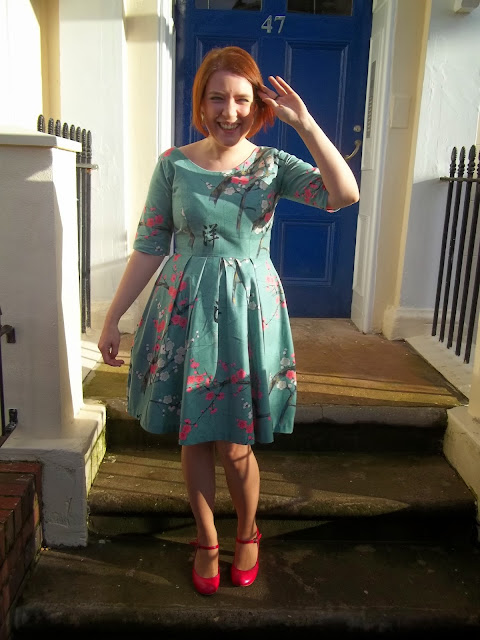 So, I kind of hate these photos. And look, I'm aware that this whole post might come off as humblebragging. I really don't mean it in that way. It's not like "OMG I'M SO TINY IT'S HARD TO BE SO LITTLE AND DAINTY" but it did come as a surprise to me that my perception of myself was so out, despite the fact that I regularly have full-length photos taken of myself. You'd think that sewing would give you a better idea of the quirks of your own body, but I don't know if it has for me. So, in summary, I'm going to retrace the Elisalex bodice in that smaller size, possibly with a slight FBA and I'm going to try shrinking this dress to see if I can get it to fit a bit better. Because, the poor dress. It's so cute! 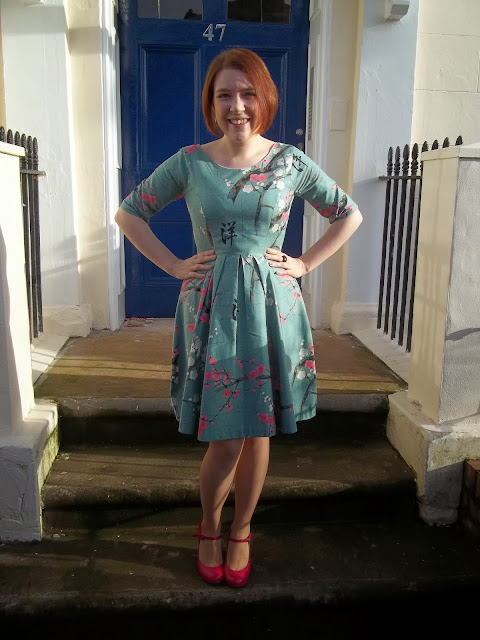 It's definitely salvageable. I love the fabric and the colours, and the shape. I can fix it, and I will wear it.  Lesson definitely learned. But make me feel better, here. Has this ever happened to you?

I am going to have some sewing time at the weekend, and I have some beautiful fabric and some fun sewing plans. I'm going to sign off here for tonight though, because I'm tired and a bit cranky. I'll be back on my usual sparkling (heh) form next time, I swear! I'm off now to spend time with the only person crankier than me - Andy Sipowicz. 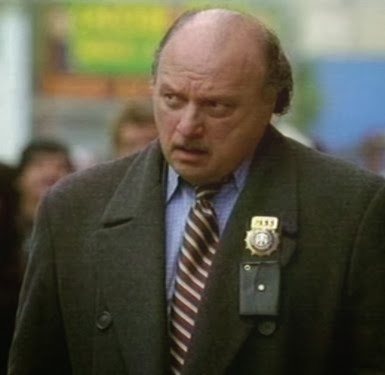 You got a lot of morons in your family? 'Cause that could be genetic.
Posted by Roisin Muldoon