The only other woman who could understand what I've been though is Priscilla Presley.

Hola lovers! Well, I hope that the cruel few days of early January aren't being too rough on you all. I went back to work on Monday and although it's only Wednesday, I already feel ready for a holiday! I have been working in London and the days have been exhausting and surreal - it won't really feel like I'm back at work until I work in my usual office tomorrow, I suppose. And until I have my first brush with canteen roulette, it won't really count.

Anyway, being back in Leamington after the holidays is actually very nice. My last few days at home were a bit stressful, for various reasons, so it has been good to be back. And I've been reunited with my sewing machine, so I have a pretty new dress to cheer up these dull days. I haven't been able to photograph it yet so you'll have to wait to see that, I'm afraid. In the meantime, here's my very last handmade item of 2013 - my very first knitted cardigan! 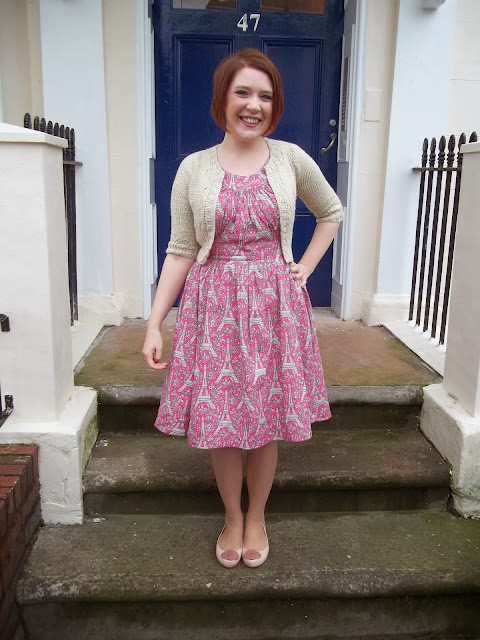 So. I knitted a cardigan! As I said in my previous post, I am ridiculously proud of myself for being able to knit something wearable that's not just a scarf. That was a bit of a mental hurdle for me to get over, and I taught myself. This might sound like bragging but, fuck it, I don't care. I think I did well.

Dudes, I'm not blind though. I can see there are some issues here and I have learned a LOT from this process. One is that although I did knit a tension swatch for this, I totally did not take into account that ease works differently in knitting than it does in sewing. I didn't read the pattern closely enough, and because of that the cardigan is too small across my bust. You might notice that I didn't put any buttons on this and it's because they would never, ever be used. And they'd be a potential health hazard. I don't want anyone in my vicinity losing an eye, after all. So on my next one, I'll knit the next size up. 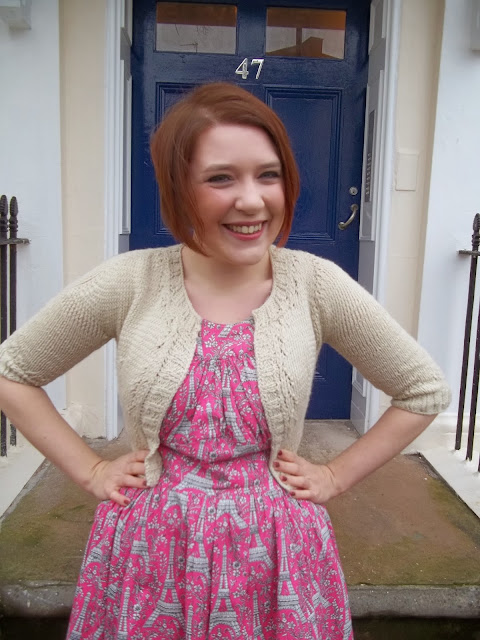 No buttons? No problem!

In terms of wearability it's not causing me a problem. I only very rarely button cardigans up anyway and, in fact, I find it annoying when they flap around. I do prefer my cardigans to be very fitted, which is why I was drawn to the Miette in the first place.

As I mentioned in a previous post, I had to rip out and redo bits of this cardigan lots and lots. The plus side of that is that I know how to do that now, and it's not a problem. It did lead me into making a mistake here in that I had knitted down as far as the waistband ribbing when I noticed a mistake that I needed to go back and fix. I did fix it, but I forgot to switch back to the bigger needles so the bottom couple of inches are knitted in the wrong gauge. Fixing that wouldn't be enough to sort the sizing out, but I won't do it again! 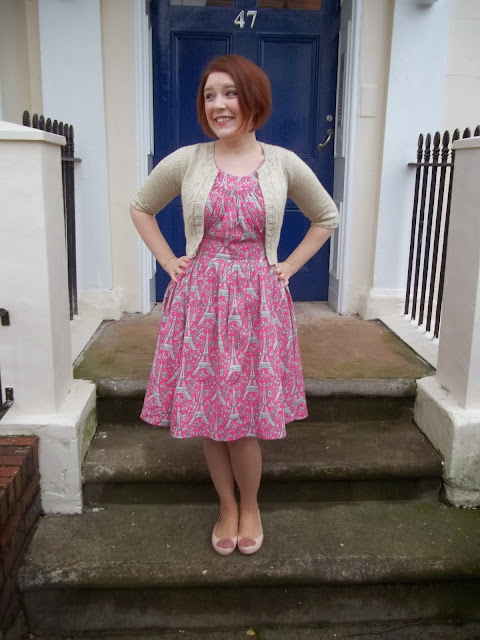 This is the face of someone who realised she'd made quite a major error, but who would rather boke than rip out more knitting.

I learned from my mistakes but I did also just, you know, learn stuff. I learned how to knit lace, how to knit a twisted rib and how to knit in the round. I think these are all skills I can build on. It was also really, really nice to have a crafty project on the go when I was at home. I like watching TV and everything, but it was good to have something to keep my hands and my brain occupied. I probably won't ever be a super knitter, but I'm really glad to have acquired the skill!

I've been thinking a lot about this over the last few days. I really enjoyed the process of learning something new and the nice thing about knitting is that it's pretty possible to go back and fix mistakes. It makes it a low-risk thing to try teaching yourself. I enjoyed the challenge of learning, but I think it was important that I took it on when I had a lot of mental space to do so - as well as a lot of free time to devote to it.

I've been thinking a lot over the last few days about the process of learning new skills and challenging yourself to move out of your comfort zone. I think it's all of the reflections posts I've been reading on sewing blogs - many of which expressed a desire to become a more advanced or professional seamstress. I can relate to that to some extent because I do enjoy learning new things.  There's been some talk in the sewing blogging world recently about what constitutes 'real' sewing - I suppose, to some, there is a distinct division between challenging 'technical' sewing and - well, anything that isn't that, I guess. I can see that sewing cotton dresses in basically the same silhouette might make me seem like a lightweight or even lazy seamstress to some people. Maybe I am. Of course sewing a dress with cotton isn't as challenging as, say, tailoring a wool coat or sewing. For where I am in my life, though, I'm comfortable with that.

I've thought about how challenging 2013 was for me in many respects. I don't mean in a bad way - it's just that I had a very busy year. I felt - and continue to feel - stretched by my job. I enjoy it, but it's demanding. I've had to learn a lot of new things very quickly and take on a lot more responsibility than I had before. That's not going to change any time soon, to be honest, and 2014 has a lot of challenges ahead as well. It might sound like a cop-out, but right now sewing is how I relax and unwind, and how I express myself creatively. It's nice to learn new things, but I'm not interested in putting pressure on myself to do that in my hobby. It's not impossible, but it's not where I am now. I'm okay with that. 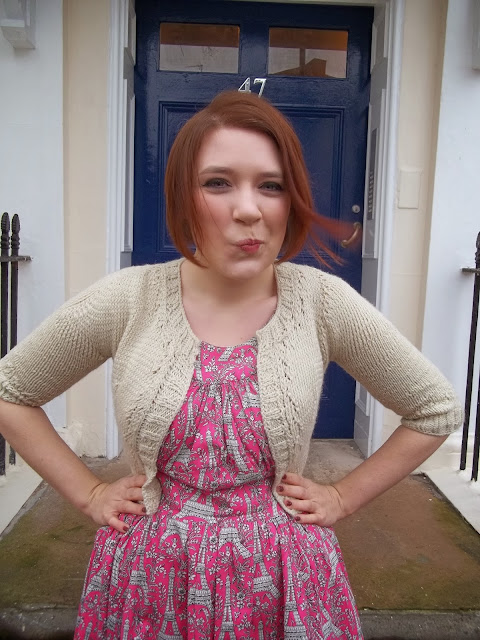 Right. Nic is teaching Mildred Pierce to his MA students. He's just mixed some cocktails so I am going to go and enjoy gin and Joan Crawford. MULDOON OUT.
Posted by Roisin Muldoon