But... wait. How... Where else could you put the Northern Hemisphere but on the top?

Hello! What's the craic with everyone this evening? I'm having a standard Sunday evening of Inspector Morse ('Daughters of Cain') and a roast dinner, after a pretty relaxing weekend. I have two days off next week as well, although not consecutively, so I suppose life is pretty good! I'm feeling a bit tired and chilly and off my game this evening for some reason, though. Apologies in advance if I ramble or make less sense than usual.

I did a fair bit of sewing over the weekend, as well as some socialising and a bit of drinking. I've had a few sewing deadlines that have made my desire to sew diminish a bit. It seems I strain against obligation, which really shows me that sewing things to sell would not be a good career for me! Anyway, I tempered it a bit by sewing something just for fun on Saturday morning. I bought some map print fabric when I went to Goldhawk Road last month. It came from A1 fabrics and on each of the last three occasions I went in, I fondled it before talking myself out of buying it. It's been working on me though, in no small part because of excellent creations from Rehanon and Hannah. I finally made myself buy it because I couldn't stop thinking about it, and how awesome it would look as a circle skirt. Map fabric ----> Globe ---> Circle skirt. You see my logic! So, that's how my latest dress came to be: 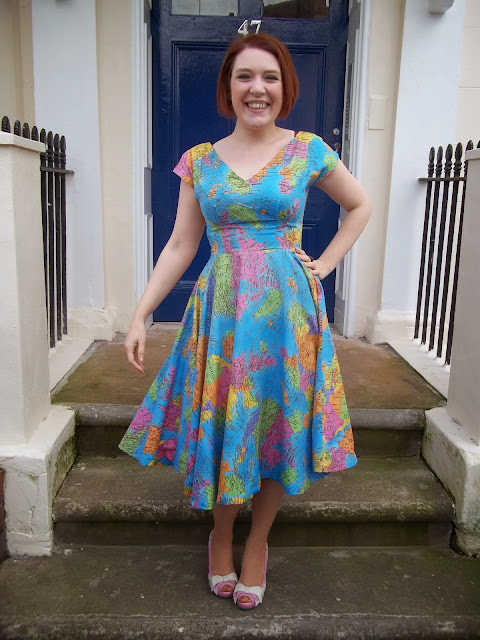 I really love the print. I've wanted a map print dress for ages - basically ever since I first spotted the fabric - and I love how vibrant the colours are on this print. As a map it's pretty terrible. The geographical accuracy leaves a lot to be desired. The quality of the fabric isn't the best either. The grain is kind of all over the place (technical term) so even after leaving the skirt to hang overnight and trimming it to make it even, this was still a real pain to hem. I ended up swearing at it more than a few times in frustration, and it's been a while since that's happened! Still, though. The fabric was cheap and you have to expect that sometimes, and I still really love the dress. 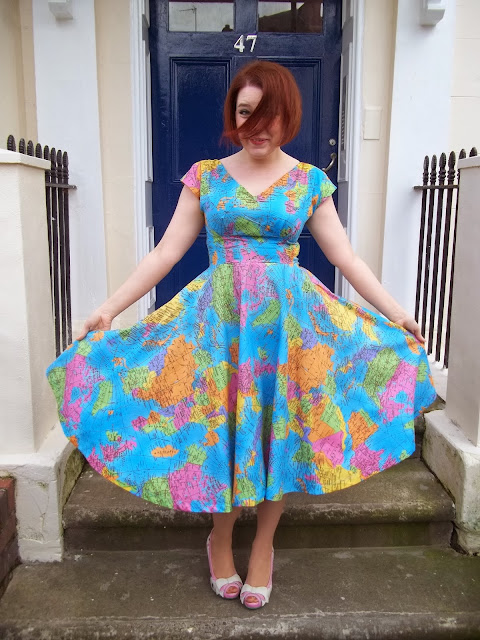 The eagle-eyed among you might have spotted that the print isn't always the right way up. Without cutting a panelled skirt, that wasn't going to be possible in a circle skirt. The idea of it tickled me anyway, because of CJ Cregg's encounter with the Organisation of Cartographers for Social Equality:

My dress no longer has the full Mercator Projection. It's upside down, so it's almost approaching a Peters Projection... Well, okay, not quite. But the way CJ's mind is blown by the alternative projection of the map is one of my favourite moments in The West Wing. To be honest, I nearly called this the Big Block of Cheese dress, but I thought it was high time I honoured Claudia Jean Cregg, because she is amazing. 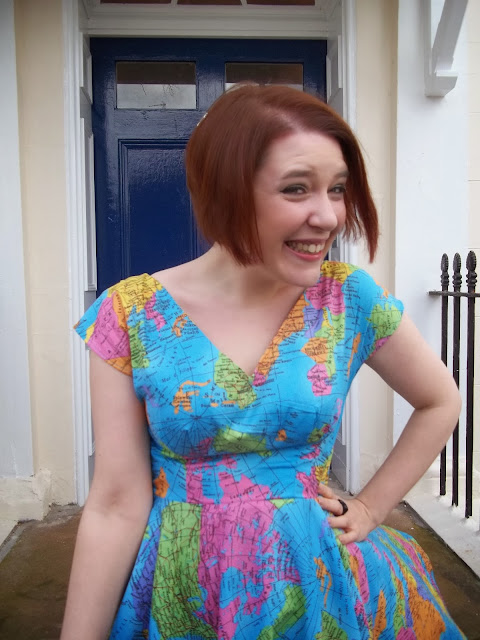 Maybe I can find something else to be a Big Block of Cheese dress one day, though.

Anyway, there's not much more to say about this dress because I've said everything I need to about the Anna bodice, and I just love circle skirts in general. Today was sort of the wrong day to photograph a circle dress made from light, drapey fabric though because it was so windy! Like, extremely strong winds - the kind that make you feel like you've been in a fight even though you've only walked 100 yards. I am so ready for it to be spring. 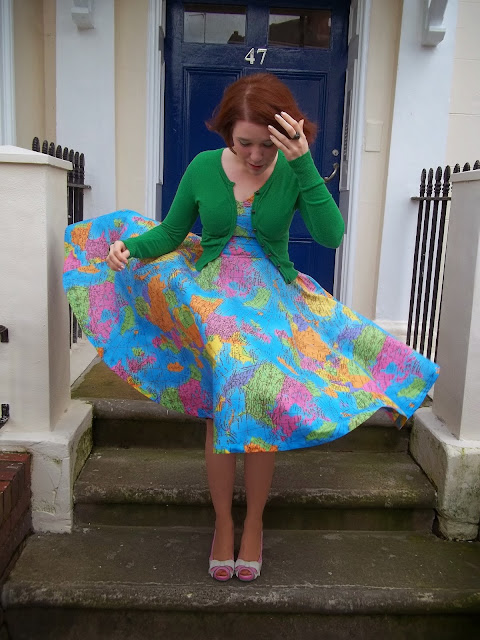 It also started to rain while we were in town, so my choice of open-toed shoes wasn't ideal either. Still, I wanted to give my lovely Lola Ramona shoes a spin: 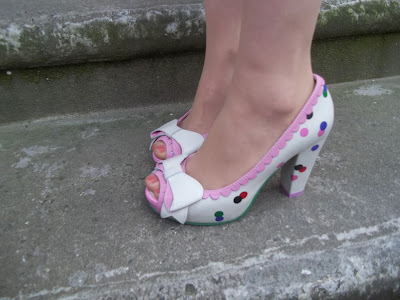 Polka dots and bows and scallops... these may be the twee-est shoes ever!

Anyway, that's the craic there. After a little turn in town and a coffee with a friend, I came home and put my slippers on and got on with sewing some of my obligation sewing and watching The Golden Girls on DVD. So my feet weren't chilly for very long after all. It was totally worth it. 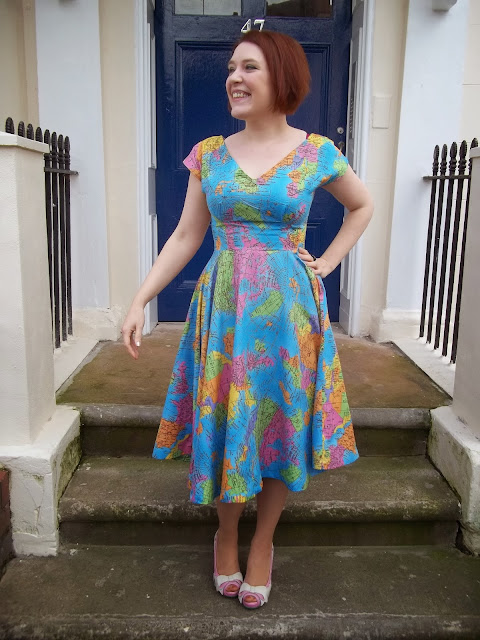 Anyway, to sum up. It's cold and grey, and I wish it was spring. This dress is not geographically accurate, but I love it nonetheless. It's blue, and it's February, so I'm calling this one for Sew Blue February. And CJ Cregg is one million percent awesome.

I have a (mostly) fun and very London-filled week ahead. Nic is running a Jazz on Film night at the Vortex Jazz Club in Dalston tomorrow night, and we're treating ourselves to a night away. Hopefully this means I can get in some cocktails and/or shoe shopping on Tuesday afternoon.

For now, though, it's time for me to give my full attention back to Chief Inspector Morse. I'll catch you cats later in the week.
Posted by Roisin Muldoon