Any dog under 50 pounds is a cat, and cats are pointless.

Hola, dudes! I have been meaning to sit down and blog all week, but I have totally lost the run of myself this week. Work is reliably pretty crazy at the moment; I had a couple of school-night social engagements and I just seem to have hit a wall of general exhaustion that no amount of pre-9pm bedtimes seem to be helping. I have a week and a half of annual leave on the horizon and I’m hanging in there for that, but this week I have either been at full tilt or flat on my back, with nothing much in between. And I have all this beautiful fabric waiting to be made into pretty dresses, but the thought of sitting at my sewing machine makes me want to cry. Sigh. I’ll get back into the swing of things over the weekend, I hope.

Anyway, I had a less frantic week last week and was able to get some sewing done then, and I had a lovely weekend as well. A few weeks ago, when I was chatting to Charlotte from By Hand London about their kickstarter bid (go and check it out, by the way) she offered to send me a couple of tickets for the Knitting and Stitching show at the Olympia. I didn’t think Nic would be up for it, despite his badass fabric choosing skills, but my lovely friend Lauren decided she would join me.

I’ve always been on the fence a bit about these kinds of exhibitions. I went along to the Sewing for Pleasure show at the NEC a few years ago and found it a frustrating experience. At the time I was pretty skint and I was also struggling a fair bit with anxiety, so being in such a big crowd was less than ideal. The sheer number of exhibitors should have been a good thing, but in an unpleasant, dark and cramped venue it was more stressful than anything else. I’ve never wanted to go back. The Olympia show was a great contrast, however, and I really enjoyed the day. The venue itself is large and airy and it has natural light. There were loads of exhibitors, and space to move around between them, and all of the housekeeping stuff like catering and toilets and places to sit down – that was all handled much better, too. Of course, the company was a major plus. Lauren loves to sew as well, and we had so much fun pottering around the stalls and picking out fabrics together. She bought more than I did BUT I bought fabric for my wedding dress, so I think we came out even. I am so thrilled with my wedding dress fabric. It wasn’t something I had considered before I saw it, but when I saw it, it was love. I can’t wait to sew it.

We were also able to spend some time with Charlotte and Victoria at the By Hand London booth, and that was a lot of fun. I’m not a natural salesperson, but I did manage to talk a lady into buying the Georgia pattern by showing her Handmade Jane’s DAMN FINE version of it. I was also a walking advert my own self, because I was wearing my second go at the beautiful Flora dress. I failed to get any photos on the day, but Nic very kindly took some photos of the dress when it was finished. 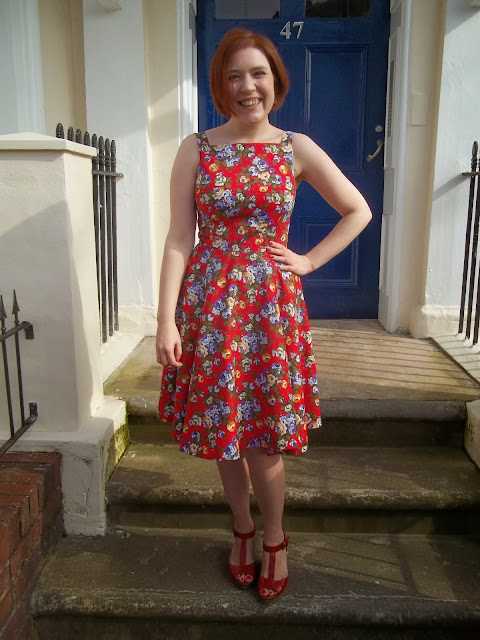 So, I made this dress last Tuesday night while Nic was out at the pub. The fabric came from Barry’s in Birmingham and I bought it when I met up with sewing lovelies at the beginning of March. It’s a cotton poplin and I think it was around £4.99 per metre. This being my second Flora dress, I knew what I was at when it came to construction, but this time I made two minor changes. I took a tiny bit of width out of the bodice front and bodice back (I just pinched it and taped it on my pattern piece. Not sure if that’s ‘proper’ or not, but it worked) and I cut the skirt pieces a bit longer. I was undecided at the time whether to go for a high-low hem or give the straight hem a try.

As you can see, I decided to go for a straight hem this time, but it did take me a while to decide. Surprisingly, Nic cast his vote for the dipped hem. I say surprisingly because, like wedge shoes and jumpsuits, I kind of assumed that high-low hems were one of those fashion things that girls liked but men didn’t! I liked it too, in theory, but for some reason my ad-hoc lengthening of the skirt didn’t work terribly well and the hem was working out more of a handkerchief hem (longer at the sides) and, well, I didn’t like it. Straight hem it was! But, I have to front with you, this is not my best hem. I was really exhausted when I was sewing it, and it’s not entirely straight. If I were on the sewing bee with this shiz, I’d be laughed out of the place. But, I’m not on the TV and it’s minor enough that I’d rather live with it than fuck about trying to fix it. I know, Roisin, RAISE YOUR STANDARDS. But, you know...

No, seriously though. I did worry about the hem when I put the dress on. You might be able to see in the photos that it’s not totally straight, but I don’t think you’d have noticed it if I hadn’t pointed it out. In fairness, you’d probably have been too polite to say if you had noticed. 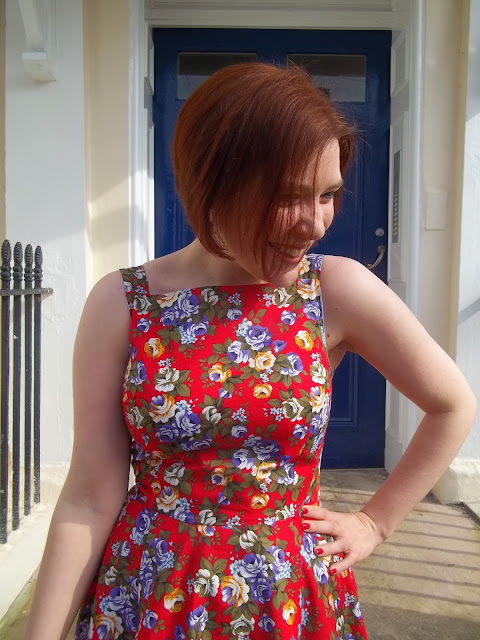 A little goofy close-up of the bodice because why not

Anyway, I think Flora is another winner. I really love the silhouette and, for a dress that is so quick and simple to put together, I think the end result is very pretty and elegant. Hemming aside, this really did only take a matter of hours to put together. I had cut the fabric out the previous weekend and I sewed this up between 8pm and 11pm. Winner! I’m sure you can tell there are going to be many more Flora dresses in my future – I’m keen to try the faux wrap bodice variation soon! I’ve decided that Flora, or a Flora variation is going to be the pattern I use for my wedding dress. It feels like me, and it totally fits the fabric I have chosen, but I haven’t decided yet which direction to go in for the bodice. Still, I have a bit of time before I have to actually cut any fabric. 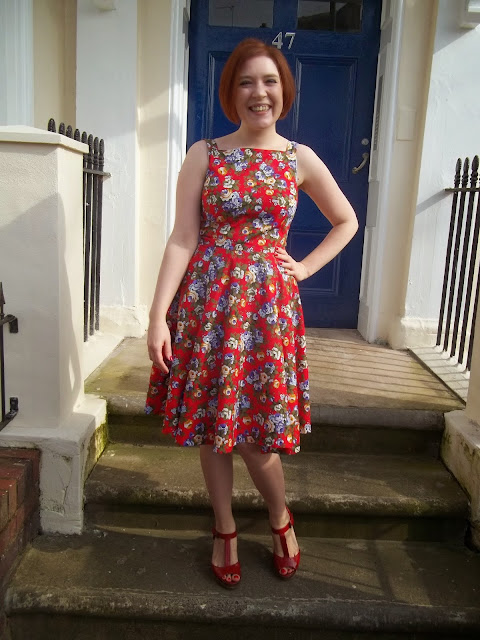 Anyway, that's the craic with the Flora dress, round 2. Oh, and I named it after the song by The Divine Comedy which is in itself a reference to one of my favourite books, Cold Comfort Farm. If you don't think Flora Poste is a total dudette, we can't be friends.

Also: on Wednesdays, we wear pink.

Right, I think that's the lot for this evening. I need to build up my energy for some sewing this weekend, and that means putting on my pyjamas and going to bed. But here's one last, totally superfluous photo that shows you nothing new about my dress. But I think I look cute in it. Mainly because you can't really see my face... 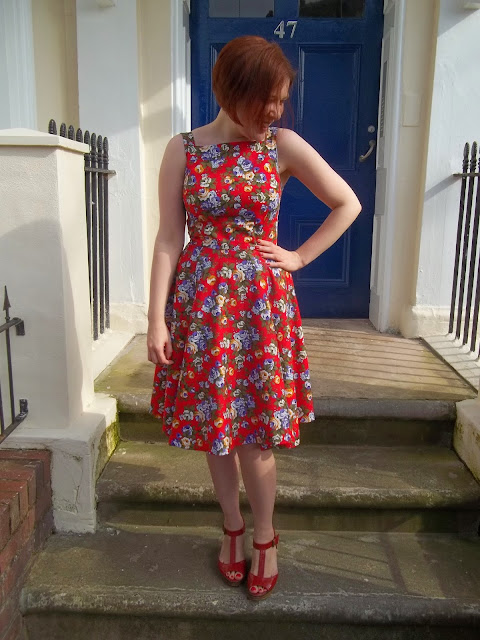