The Exhausted Ruler said if you took an oath it would have to be broken for generations of centuries of hundreds of years.

HOLLA. Hello there, everyone! What is the craic with you all this evening? Right now I am huddled under a blanket with the heaters back on - apparently it's going to warm up again by the weekend but it's cold right now, boo! I had my tights packed away and everything.

Cold nose aside, everything is pretty swell. I've had a really good few days and have even managed to get some of my energy back - I got some sewing in over the weekend and on Monday evening as well. I've been working at home and wrestling with the Enormo Spreadsheet of Doom parts 1 and 2, but the up side of that is the coffee is good here and I don't have to take the train. So yeah, things are pretty good. I had a long weekend as Nic and I had an appointment to see the registrar on Friday to give notice of marriage. That was very exciting, not least because it meant I was able to miss a very boring meeting at work. It was a slightly chilly day but the sun was shining, and we had a lovely time. We went for lunch afterwards and had a bottle of prosecco and some sloe gin in the evening to celebrate. On Saturday we went to Birmingham to see some short films as part of the Flatpack Festival, have lunch at Bistro 1847 and generally just have a bit of a day out. I tried to buy shoes, but failed. In fact, I have attempted to buy shoes on two separate occasions since then, but have crapped out just shy of hitting 'submit' each time. I must be ailing for something...

Aaanyway - that's us all caught up. I have a new sewing project to show you and everything! I actually finished this dress a couple of weeks ago, but I'm pretty behind with blogging. Sooo... I bought this fabric on payday at the end of last month, when I also bought Eurostar tickets to Paris (woohoo!) and paid the electricity bill, and then decided not to buy any more fabric this month. And then I went fabric shopping with some of my sewing blogger pals, and then I went fabric shopping with Lauren. BUT, when you see the fabric, you'll understand why I had to buy it. 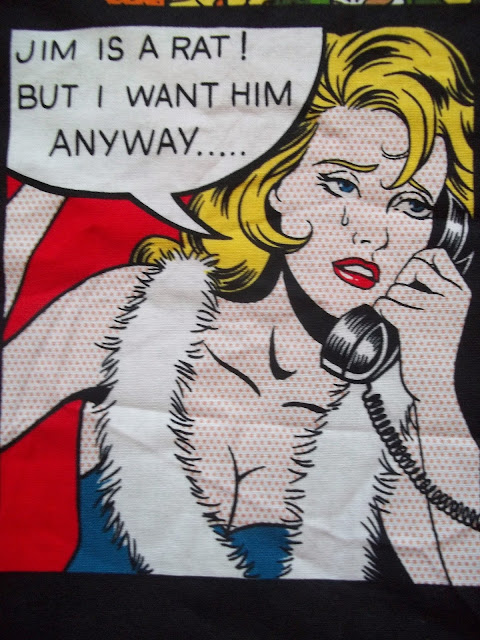 Yeah. Now, I can't remember who it was who alerted me to the existence of a sequel to Home Sewing is Easy, but I'm glad they did. This is awesome. Unlike the original, this does have a story to follow. The panels are spread at random across the fabric and not in the order of the narrative, but the jist of it is that Jim is a rat. He's invited Mia to join him in Hawaii, but she doesn't have a thing to wear! 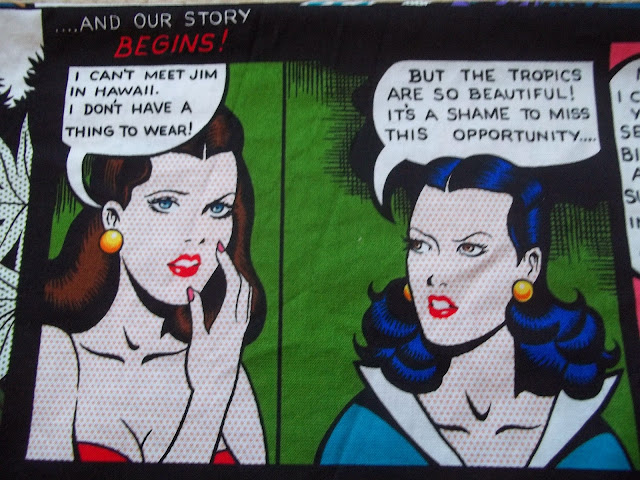 Luckily for Mia, her friend Susan can sew... 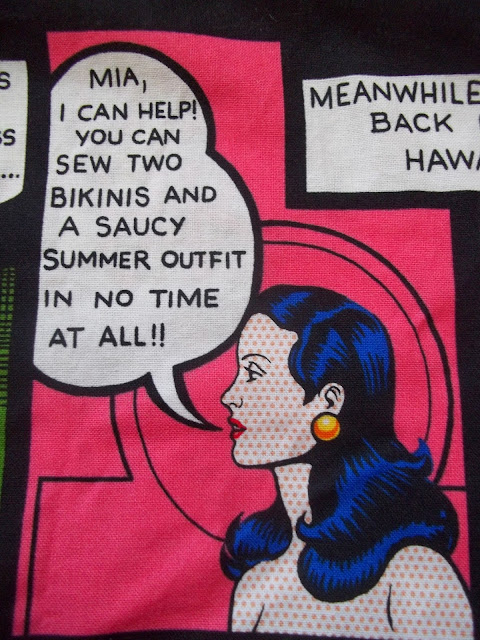 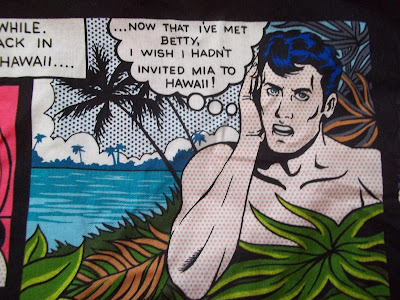 Jim is, I guess, naked somewhere? And in the short time that's elapsed since inviting Mia to Hawaii, he's met someone else. He IS a rat! 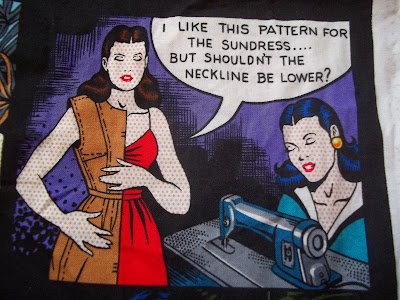 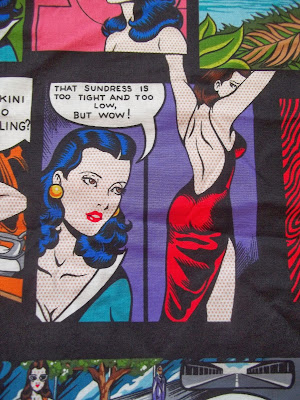 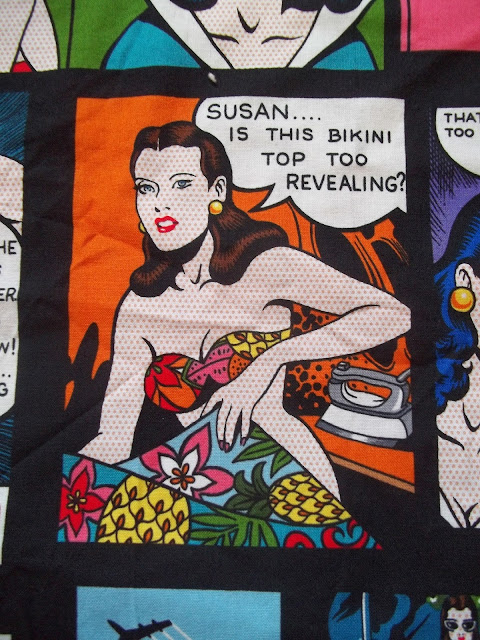 Well, Jim is naked. So, probably not. 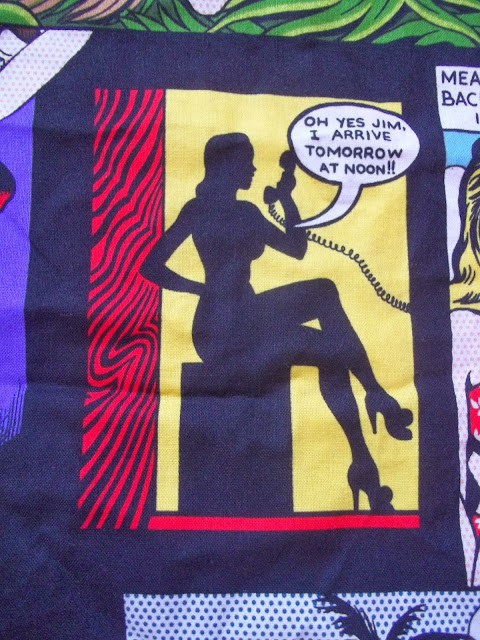 Is Mia naked on the phone? 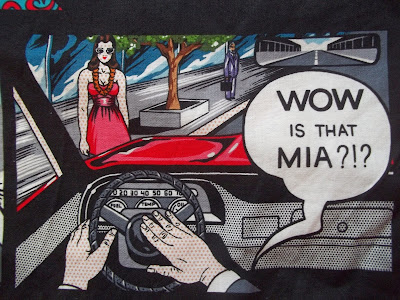 Time to ditch the blonde... 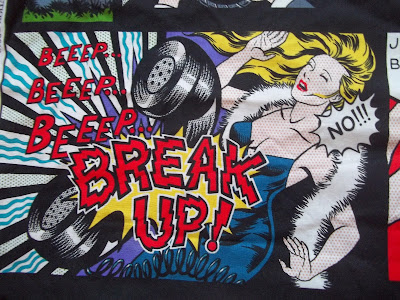 Dude isn't even man enough to do it face to face. He's too busy macking on Mia down at the beach... 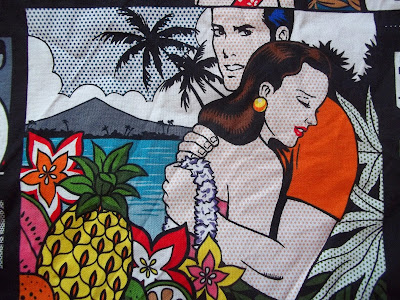 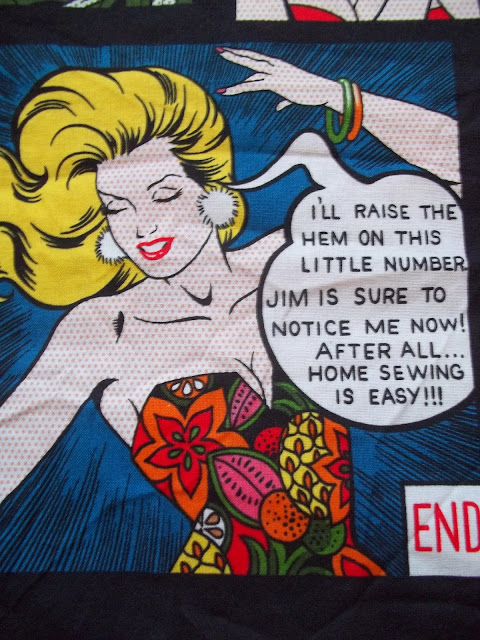 Yeah, Betty. You raise that hem. Put it all in the shop window, why not. It'll do the trick. I guess home sewing isn't the only thing that's easy.

So, yeah. The print is fabulous. As well as the story being genuinely hilarious, I absolutely love the colours, the Ray Lichenstein style drawings and the pineapples. All the pineapples. I wanted something pretty simple to showcase the amazing print, so reached once again for Christine Haynes's Emery pattern... 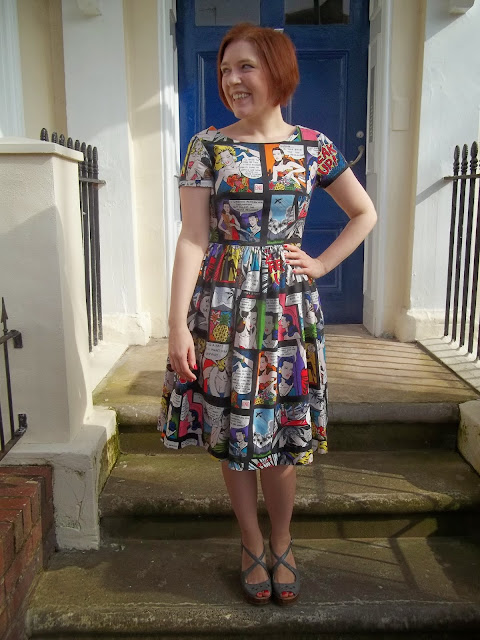 Sons of the Desert dress and Topshop wedges

I had two metres of the fabric, which was more than enough to ensure Betty's declaration that 'home sewing is easy' could go front and centre. That's the only attempt I made at pattern matching or anything, but I'm really pleased with how it worked out. Sadly, I cut the fabric and sewed the dress without realising that I'd lost a bit of weight, and it worked out a bit too big. In my first lot of photos, I put a belt on to try to hide this, but I felt uncomfortable in the dress the whole day. 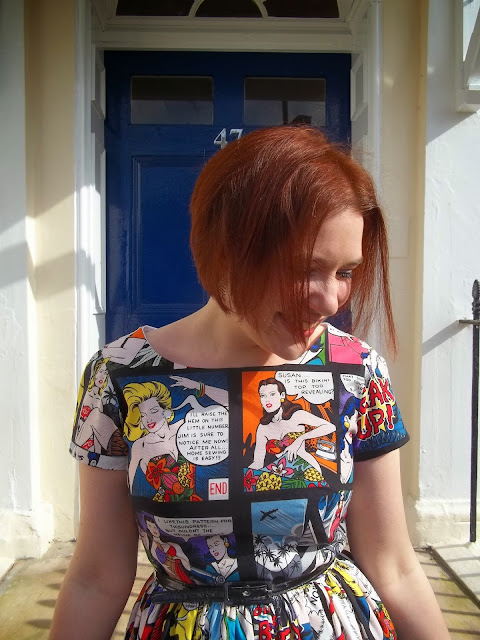 You can see the excess fabric under the bust and across the shoulders. I did my little shrinking trick of popping the dress through a very hot wash, and it was an improvement. The next time I wash it, I'll do the same. I've re-traced the pattern in a size down. It's kind of a bummer, actually, because quite a few of my handmade dresses are now too big and my alterations pile is now as big as my fabric stash. Over the next couple of weeks I am going to figure out what I want to alter, what I want to pack away for a rainy day, and what I'm going to send to the charity shop. I did buy some more of the original Home Sewing is Easy fabric, though, because I'm not even sure how to begin altering the dress I made with that and it swamps me now.

Anyway. A bit of ease in a summer dress is no bad thing, and I am really happy with this dress. The fabric is just so fucking fabulous. 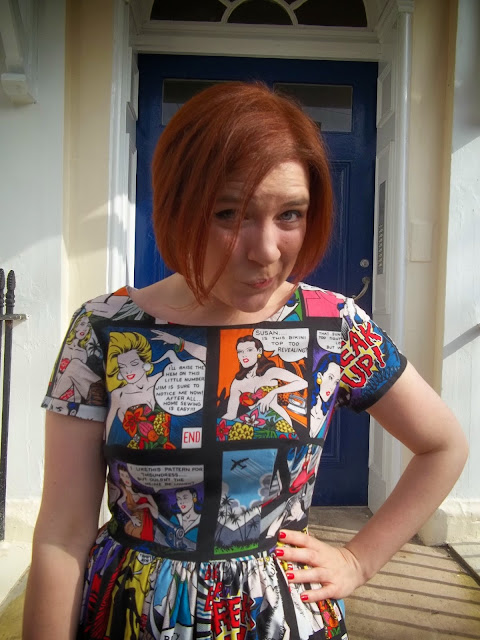 Still a little bit big... but I guess that just means room for cake, right?

I know some of you enjoy knowing where my random references come from. I named this dress after one of the funniest films I've ever seen; the Laurel and Hardy film Sons of the Desert. Often, all I need is to think about Sons of the Desert and I'll start laughing. Stan and Ollie want to go to their Sons of the Desert lodge convention in Chicago, but are pretty sure their wives won't let them. Ollie gets a vet to tell his wife he's ill, and that he needs to go to Hawaii to recuperate. Off they merrily go to Chicago, their wives none the wiser. Disaster strikes when the ocean liner they were due to travel on sinks in a Typhoon. When their wives go to the cinema to take their minds off it, they catch the boys out... 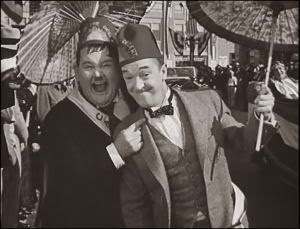 So, although they never actually make it to Honolulu, Stan and Ollie manage to get into just as much trouble there as Jim, Mia and Betty. 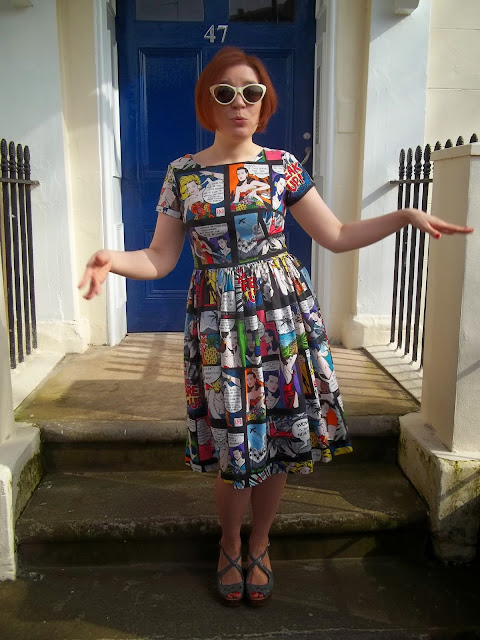 Honolulu Baby, where'd you get those eyes... 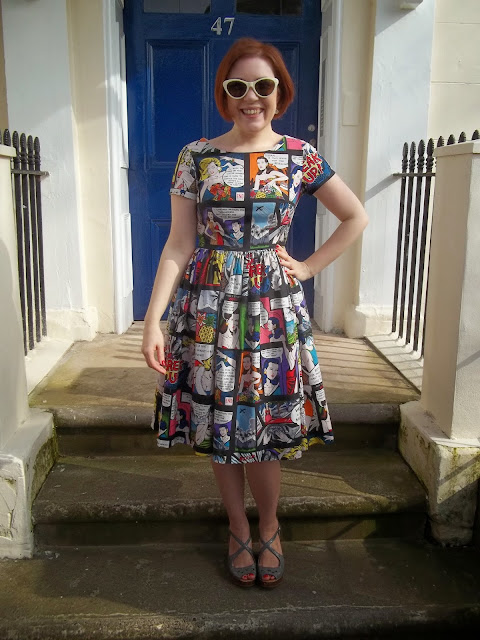 Maybe one day, I'll get to wear this dress in actual Hawaii. For now, I'd settle for the sun coming back out. I wore this to work last week and, while my colleagues are used to the sorts of clothes I like, they were pretty intrigued by the print on this. It was amusing to be stopped in the coffee queue because the person behind me hadn't finished reading my back.

Anyway, that's it for this evening. It's taken me ages to write this, what with all the five million pictures and thinking up all my hilarious jokes. Nic and I are watching the Harry Potter films and we're up as far as Harry Potter and the Half-Blood Prince. He's never read the books and doesn't really know anything about the stories, so it's really fun to watch them with him. Although it's kind of weird watching these films through again. All I can think is how hideously irresponsible all wizard adults are. I mean, Dumbledore is a total dick. Sorry not sorry. But it's also a joy watching Ron Weasley grow up again. I think the only child actor cuter than Rupert Grint was Michael Fishman, who played DJ in Roseanne. 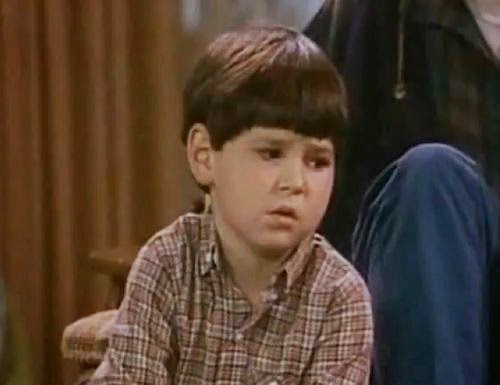 THAT LITTLE FACE THOUGH

Oh sorry, yes, this is only the best gif ever. Night!
Posted by Roisin Muldoon