I once worked with a guy for three years and never learned his name. Best friend I ever had. We still never talk sometimes.

WELL BOUT YE. Yes, I'm in Northern Ireland right now! I'm at home this week for my little sister's wedding. It's great to be home, not least because it's nice not to be at work right now. We got home quite late on Tuesday night and have spent time with family, had a little day out in Belfast and spent lots of time playing with the dog. Hurrah!

I have a little backlog of sewing projects to show you, having managed to finally shake off the tiredness that dogged me throughout much of March. It's been really good to want to sit down at my sewing machine again, because I think that was the thing I had been missing the most - the excitement and joy of planning a project.

So, the story with this dress is that I went fabric shopping at the start of last month with Marie, Kat, Helen, Claire and Amy in Birmingham. I mentioned to Marie how much I loved the fabric that she'd made her Flora dress with, and when I was on my way home she messaged me to say she was going to send me some. I was very touched and I wanted to do something special with it - and of course, another one of Marie's creations inspired me, her Elisalex of Ecstasy and Shame! After my Northland Row dress worked out to be too big, I got around to retracing the Elisalex dress pattern in a size 8. Pattern tracing is such a faff, but at times like these it is totally worth it. Anyway, I sewed this dress last Sunday afternoon while Nic was at the cinema with some friends. Having made the Elisalex dress many, many times before, I can put one together very quickly indeed! 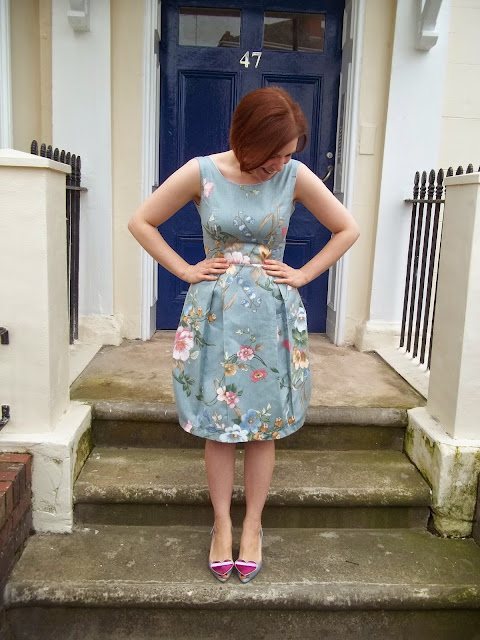 Isn't the fabric beautiful? It's a furnishing weight fabric, so pretty perfect for the dramatic tulip skirt and its awesome box pleats. It has a slight sheen to it, which Marie says will fade after a wash -  mine still has it though as I didn't worry about prewashing the fabric before sewing (gasp! I know, I'm a sewing slut! Clutch those pearls, guys!)This feels like a slight departure from my usual OTT style but I think it has a really classic appeal which works well with the shape of this dress. 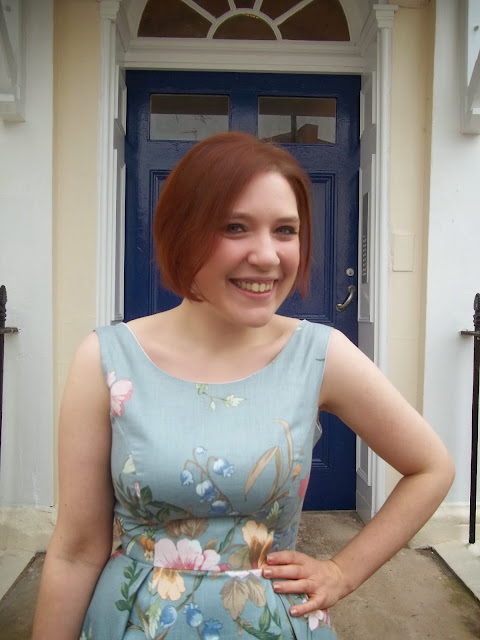 So, after sewing a few dresses recently that have worked out to be a bit too big, this dress is rather more fitted. I had done a full bust adjustment on the larger size Elisalex I had been working from last year and I didn't bother with this one - my current measurements didn't seem to warrant it. I didn't toile before cutting into this fabric (get the pitchforks!) partly out of laziness, but also partly because I don't have anything approximating this weight of fabric to compare it with. Anyway, long story short is that I think I could probably do with a bit more room in the bust, and there is some wrinkling across the back but this may not be the case with a lighter weight fabric. In any case, this dress is perfectly comfortable and certainly wearable as it is. Well, I'm happy to wear it. 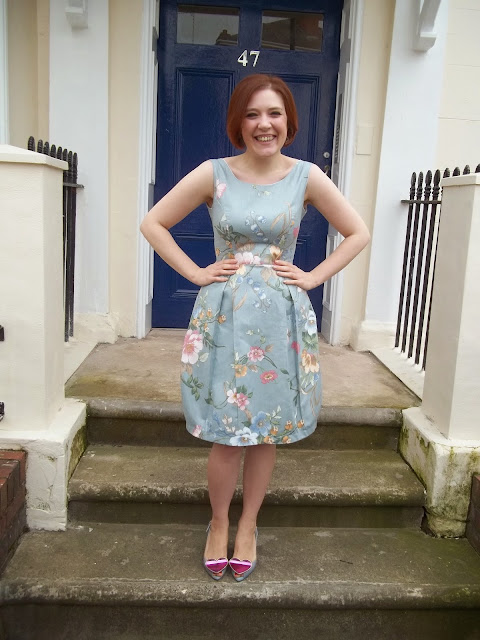 Now, normally I wouldn't have very much to say about the construction of this dress because I have made it a number of times. This time, though, I made a really silly mistake. I didn't realise until it was fairly late on in the construction. Can you tell what it was? 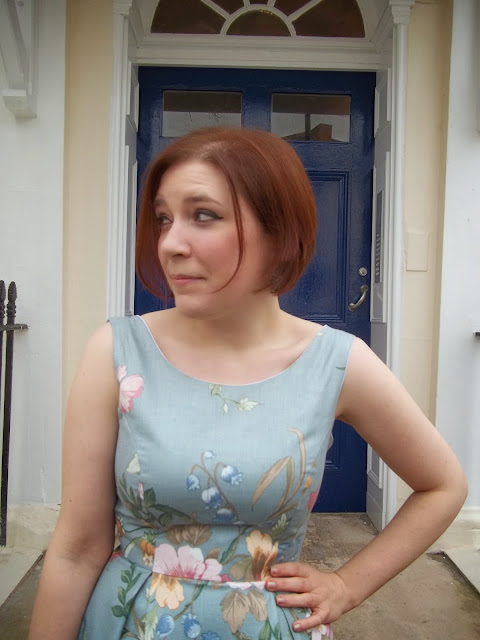 I'm not sure what I'm giving the side-eye to in this photo but it made me laugh, whatever it was

I SEWED THE DAMN SKIRT ON UPSIDE DOWN.

Yeah. I sewed the skirt on upside down. I thought it strange that, when I was attaching the skirt to the bodice, I couldn't find the notches I'd cut for the pleats, but I put it down to the fact that the fabric edges had frayed. I found those notches later, when I was ironing the hem. Yeah. Now, I wasn't going to say anything because it makes me feel sort of stupid and luckily, I think that if you didn't know I'd done that, it wouldn't have been obvious. Thankfully the fabric doesn't have an obvious one-way print. I could have detached it and redone the whole thing, but I didn't because - well, I didn't want to, and I like the skirt as it is. Anyway, I wanted to mention it - not because it is obvious, and not because I'm proud of it, but because these things happen and it's never the end of the world. Earlier in my sewing life, this would have really upset me. My dressmaking students often tell me they're afraid to cut into fabric in case they ruin it. But you can't ruin fabric, it's only fabric. And mistakes happen, and that's fine. No-one's going to die, like. 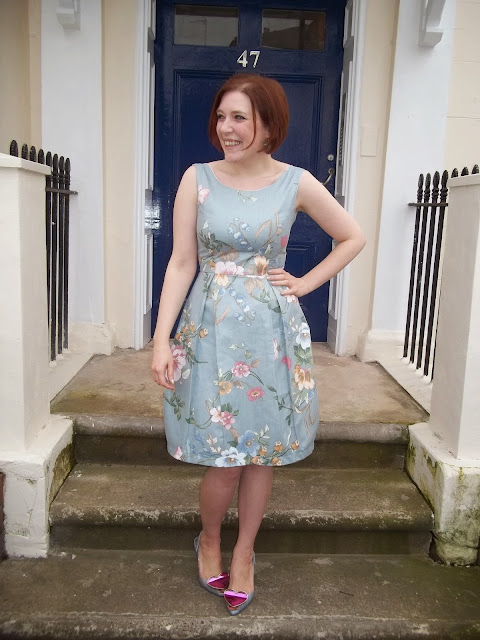 I kind of like the mistaken skirt anyway. It makes it more of a bell shape, and it works very well with the weight of the fabric. And I love this fabric such a lot. It's dear to me on account of being a gift, and it's just so pretty and elegant. Plus, I think the colours work perfectly with my dove blue heels - which are one of my favourite pairs. I'm looking forward to taking this dress with me on our honeymoon - I think it will look great with oversized sunglasses, cute flat sandals and a glass of champagne.

The moral of the story is that as well as being a sewing slut, I'm also pretty remedial. Judge me if you want.  BUT IT DOESN'T EVEN MATTER and I really do love this dress. Thank you so much, Marie - I think that, even with my ridiculous mistake, I did this gorgeous fabric justice.

Right now, I'm away. There's some bad daytime TV to be watched and a small dog to be cuddled. Catch you all after the weekend!
Posted by Roisin Muldoon