Tell me. What is it like to stare into the eye of Satan's butthole?

Hola, boys and girls! How is this Thursday afternoon treating you? I'm grand - I have just finished work for the day and it's been a good one, even though I did get drenched when I popped out at lunchtime to go to the post office. The drenching paid off though, as I was also able to pop into Berylune and buy some of their new stock - some beautiful Rashida Coleman-Hale for Cloud 9 fabric. Yay!

Anyway, it's been a busy week at work and a fairly productive one at home. Nic was away at the start of the week so I entertained myself by sewing and watching lots of TV boxed sets - I made a dress and binge-watched episodes of Law & Order, The Office (all of season 7, basically) and Hannibal, and I also got caught up on all four episodes of this series of Made in Chelsea. I was pretty TV-ed out by the time Nic came back and it was really nice to talk to another human being! With another bank holiday weekend on the horizon, I have lots more sewing lined up, including my wedding dress! Meep! Ideally, I'd like to leave it until slightly closer to the wedding to sew it, but this weekend is my only free weekend between now and then. So that's exciting, if a little bit daunting. I'm also going to pick the winners of Sew Dolly Clackett - I selected a (long) shortlist today and have shared it with my judging panel of Nic and Disha, and hopefully they'll be able to help me pick the winners from that. It wasn't easy, not least because all it has made me want to do is buy fabric! I hope to announce the winners over the weekend, so watch this space.

But you know, it's not like I have any shortage of dresses, is it? And I have a new one to share with you today. This is yet another By Hand London Anna dress - my love for that pattern basically knows no bounds. As with the Elisalex pattern, I had to get down to retracing it in my new size, as the pieces I had been working on are now two sizes too big. A happy task, if a tedious one. I've hacked this pattern every which way, but this time round I decided to sew up a straight Anna because, damn. She fine. 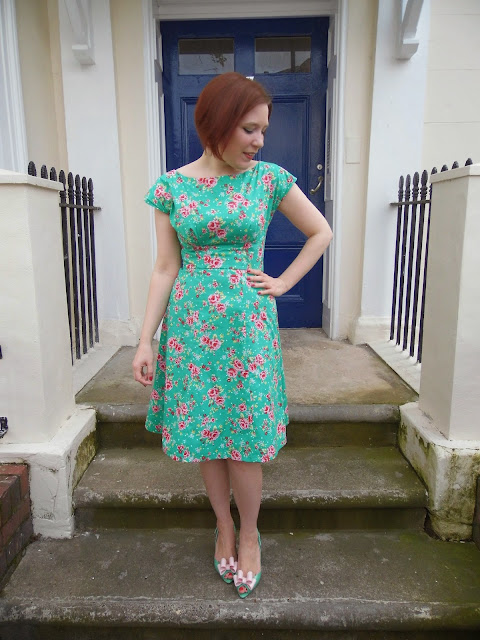 Yeah, I'm not really sure what face I'm pulling there! I bought this fabric when I went shopping with Char and Sarah in Birmingham at the start of February. It came from Fancy Silk Stores and they had all these bolts of it next to the till, and it was basically an impulse purchase. You know, like when you buy sweeties at the supermarket when all you went in for is washing-up liquid? Anyway - it was £4.99 a metre and it's twee as shit, and I wasn't altogether convinced that I actually liked it. But you know me - if it's ugly and I'm not sure that I like it, it generally means that I will like it. I bought two metres and had initially planned to make an Emery dress out of it, but when it came to cutting it out it felt like only Anna would do, so there you go. 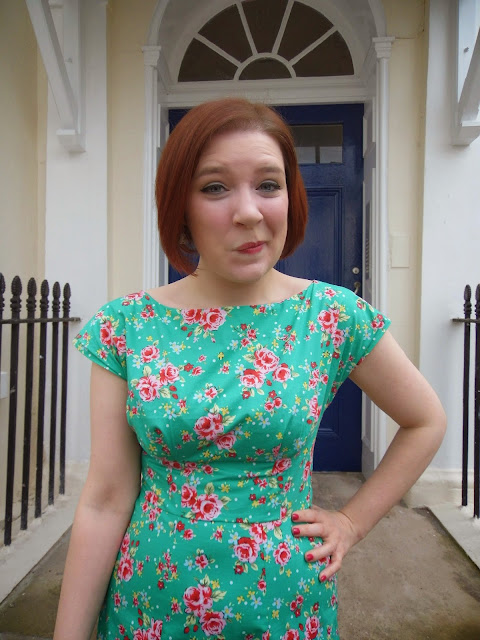 So, while the fabric looks like Cath Kidston threw up in a bin after eating too many sweets, it's actually by Hill-Berg fabrics. And I'm mostly joking with that Cath Kidston remark. I quite like Cath Kidston - I mean, I made my Madarch dress, and I have two Cath Kidston bags and a purse (all polka dots, obviously) and you'll have to pry my mushrooms mug out of my cold dead hands, but something about the relentlessly middle-class mimsyness of it just makes me crazy. Even though I kind of like it. I think that's what makes me crazy. I'm such a smug hipster that I think I should be above it but I'm totally not. Or at least, not completely.

Anyway. It ended up that I liked this fabric, even if it is disgustingly twee. It's green and pink, so it works with my lovely pink and green sandals. I made this dress while binge-watching episodes of Star Trek: The Next Generation so it very nearly got called the STFU, Guinan dress. In the end I named if after Deanna Troi. I love to bag on her because she's quite shit at being an empath, but also I think she's pretty awesome. 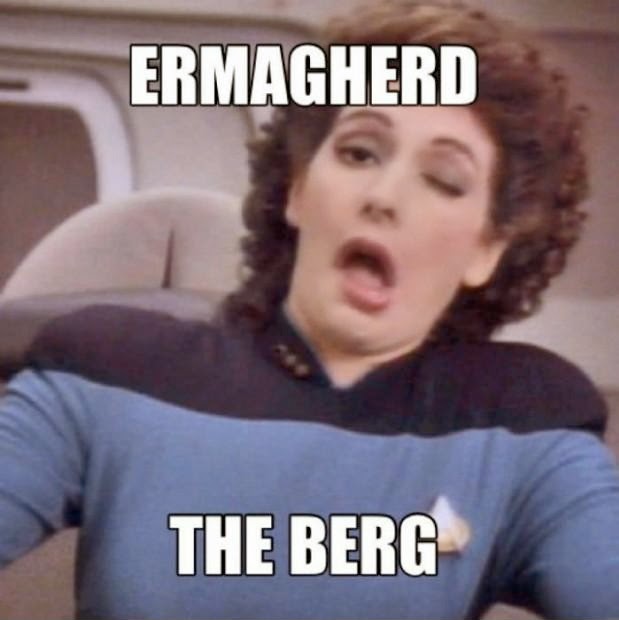 I'm just going to leave this one here...

As I have made the Anna dress so many times before, I don't have anything left to say about it! I turned and stitched all of the skirt seams and pinked the bodice seams and waist seam. I didn't make any adjustments at all to the pattern and just sewed a straight size 8, but I think for next time I may have to take a bit of width out of the back neckline. I hadn't needed to do this before, but I think it would be a good adjustment here. 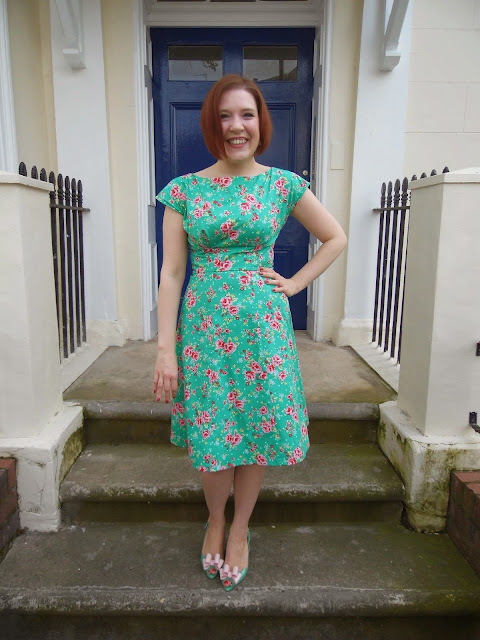 So that's basically the craic with this dress. And with this week, which has been grand but which I am glad is nearly over. I feel like I should have a bit more to say, but actually I have probably waffled on for quite long enough. So I'm out of here. Laters, gators.
Posted by Roisin Muldoon