Stop eating people's old french fries, pigeon! Have some self respect! Don't you know you can fly?!

Yo, friends. What is UP. I've been catching up with myself this week, after having a couple of busy weeks. Nic and I went to Lancashire this past weekend for a wedding, which was tremendous fun. The wedding was at Hoghton Tower, which is apparently the second most haunted house in England. We didn't see any ghosts, and didn't take any proper photos, but had a great time all the same. Even though three out of the four taxis we had to take over the weekend were driven by people who had apparently no knowledge whatsoever of the local area. None. One of them managed to get lost in the car park of our hotel for ten whole minutes. Good times. 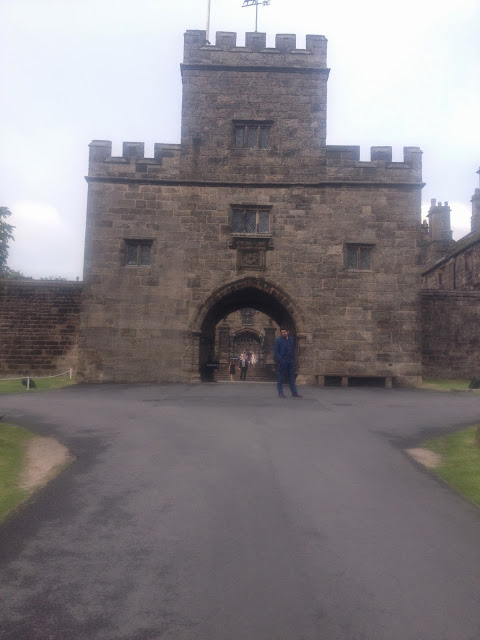 Hanging out at our castle. You know. As you do.

Anyway, that's the craic with the weekend. It was good and I didn't drink too much, and I managed not to have a rage stroke on the train journey home from Preston on Sunday. All good things. I made a new dress to wear to the wedding (not yet photographed) and have managed to squeeze in a bit of sewing this week too (also awaiting a photograph) Actually, I was feeling a bit crappy this afternoon but seeing that written down and reminding myself of what I've managed to achieve over the last few days has cheered me up a bit. So I guess I should get on with my project backlog because you know: IF YOU DIDN'T BLOG IT, IT DIDN'T HAPPEN.

I'm still heavily into the old African wax cotton and this is one of two more dresses I have to show you that have been made from it. As with the Le Comptoir Général dress, I made this one from beautiful African wax cotton that I bought while in Paris. Oh! And on that note - go and check out what Lynne did with her Parisian fabric! I bought this 5m length from Tissus Toto on Rue Clignancourt after extensive - if somewhat incomprehensible - discussions with Monsieur Toto about which colourway I should buy (I didn't find out his name, like, but this is what Nic and I called him. Much the same as we call the proprietor of Royal Fabrics in Leamington Mr Royal Fabrics, and the owner of Kang's corner shop Mr Kang. Except, Mr Kang is actually his name) To be honest, I had my heart set on this pink and blue colourway I ended up buying, but bless him, he wanted to make sure I was making an informed decision. That shop is so fucking awesome. God, I miss Paris.

ANYWAY. Most of the fabric I bought in Paris was without a specific project in mind, but this fabric was already earmarked for another By Hand London Anna maxi dress. I'll tell you why: just before the pattern was released last year, I was totally gutted to have to miss their Club Tropicana party. Cruelly, I had to work that day (a Saturday!) and it was one of the worst days I have ever had at work. Anyway - I saw photos on instagram and blogs and that, and in them, Charlotte was wearing the most AMAZING dress. Yeah. It was an Anna dress in wax cotton. You can see some photos of it in Rachel Pinheiro's post about it here. So this idea has been percolating for about a year. I had the extra impetus to finally get it done when I knew I'd be attending the By Hand London Kickstarter party this month, so I finally made it happen. w00t. 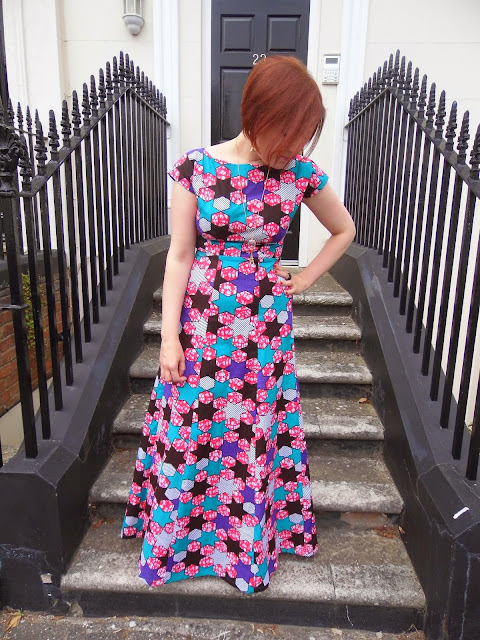 So. There is a LOT of pattern going on in this print, isn't there? It's kind of wild and I must confess that after I had cut the pieces out and started to sew them together, I worried a bit if it would be too much. It is kind of too much, to be honest, but I am really happy with it. I don't shy away from bold prints or bright colours, and this has a bit of everything.

I'm really happy with this dress, for lots of reasons. I love the fabric and, having made approximately 7,000 Anna dresses and dropped two dress sizes, I have pretty much nailed the fit, I think. There is a bit more ease around the bust now than I'm used to, but I can live with that.

I thoroughly enjoyed sewing this dress, as well. The wax cotton is excellent to work with - as I have said in previous posts, it has a bit of body but it behaves well. It doesn't fray that much and it presses well and it's just pretty nice to handle. It's good to wear, as well - the day of the BHL party it was HOT AS BALLS and although you might think that a slightly weightier cotton would be claustrophobically warm to wear, it wasn't. This dress withstood travelling across London on the tube at rush hour admirably well and I even got a compliment from a fellow traveller, who stopped me at the top of the escalator at Bethnal Green tube station to tell me how much she liked my dress. I call that a score. People aren't usually all that friendly on the tube.

Anyway - I took my time sewing this dress. All of the skirt panels look really similar and my advice to anyone making it is to be really conscientious about making all of the notches on the skirt panels. Also, it totally helps to have a system for assembling the pieces, if that makes sense. I worked from the centre front panel outwards and that stopped me from getting confused. I turned and stitched all of the skirt seams (I pinked the bodice seams) and I used a french seam to attach the skirt to the bodice - basically because it looks pretty and also it seemed like it might be a little bit more stable. I was kind of stressing the day we took these photos so there's none of the back (LOL, as if I'd use them anyway due to my derp back) but I used a concealed zip. 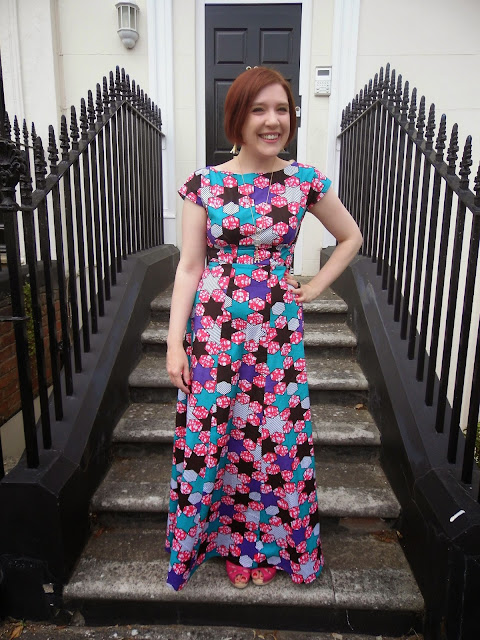 As I'd bought the fabric in Paris, I thought I'd accessorise with some awesomely tacky Eiffel Tower earrings - they're so big and heavy they'd make Pat Butcher be all LOLWUT - and a matching necklace. These were a gift from Mrs Needles at my surprise hen do. She tells me they're all the rage in Dalston. Finally, I'm down with the cool kids. 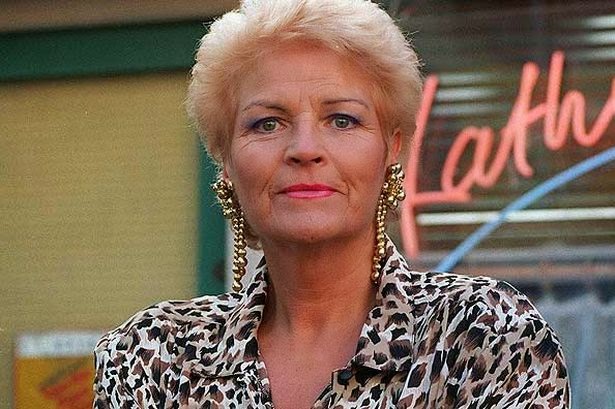 Pat Butcher Fucks Given = None

I made this dress to wear to a party and it's definitely not an everyday dress. But I have worn it since its debut - in this lovely hot weather, having a comfortable and fun maxi dress is really useful. Nic loves it when I wear a maxi dress, as well, so I have been wearing it a bit more often because it makes him smile. Maybe that makes me a bad feminist but please be assured: I wear whatever I want.

Crucially, this dress really fulfilled its party potential. It wasn't the only Anna in the room that night, and it wasn't even the only Anna on the dancefloor, but I like to think it held its own as I danced around the room with the elegance and poise that everyone associates with me: 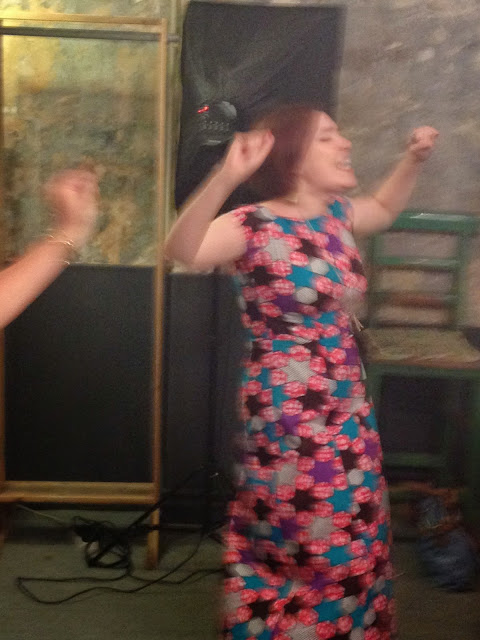 Um, yeah. As I always say when I post an Anna dress - this will not be my last one. I did actually buy other fabric in Paris to make a maxi dress, and this is my default pattern. But - it is good to branch out occasionally - do any of you guys want to recommend an excellent maxi dress pattern to me? I know crowdsourcing is lazy as shit, but I genuinely am interested to hear your recommendations!

Right. This lady has got to move. I've had a long day and I need to go and lie down. More soon, though. See you then!