Until mankind is peaceful enough not to have violence on the news, there's no point in taking it out of shows that need it for entertainment value.

Happy Friday, everyone! Regardless of what is going on in my week, or what is going on over the weekend, it's hard not to feel cheerful on a Friday. Today is especially good because I'm working from home in the sunshine, I don't have to go into the office tomorrow (as I previously thought I'd have to - but my manager told me I could give it a miss) I've had one pair of awesome shoes delivered and another are on their way (don't look at me like that, I don't even care) and I have beautiful fabric and time to sew over the weekend. What could be better than that?!

In my teens, Friday night was also my night for going out. From about 16, my friends and I spent most of our Friday nights, the very odd Saturday and the occasional Wednesday night at a local nightclub. It was called Clubland or, if you were a culchie, "Clublands" or if you were old and a culchie, "The Clubland" I think most of us have a place like that in our past - somewhere with sticky floors, cheap drinks, excellent (if occasionally questionable) music and many happy memories. I've had three significant boyfriends in my life, and I met two of them in Clubland. I met a fair few insignificant boyfriends there too.

Friday nights were called Backtrax, and the DJ's name was Andrew Gold. I say "was", it's quite possible that Andrew Gold is still DJ-ing away because Clubland is still there. Anyway, it was free in before 11 if you had a voucher - I had loads because I stole a whole bunch of them from the DJ booth one night - and shots were £1, and the music was 70s-90s and indie. You could predict the songlist each week - Andrew Gold has a playlist that he stuck to - and most of my favourite songs are still songs I danced to at Clubland. Most of our wedding reception playlist was solid Clubland classics. To give you an idea of what it was like, watch the video to At The Indie Disco by The Divine Comedy...

The Divine Comedy are my all-time number one favourite band, and this song is from their last album, Bang Goes The Knighthood. Nic bought me this album for my birthday a few years ago and it's been on constant play basically ever since. I especially love this song as it encapsulates a very happy time in my life, and Nic and I had it as the last dance at our wedding.

All of this is a very long preamble to showing you a dress I made! But basically it's because I'm a child of the 90s. I don't necessarily approve of 90s fashions coming back - the decade was not kind to us, fashion-wise - but as soon as I saw this fabric I wanted it. It's 90s in a good way, just about! 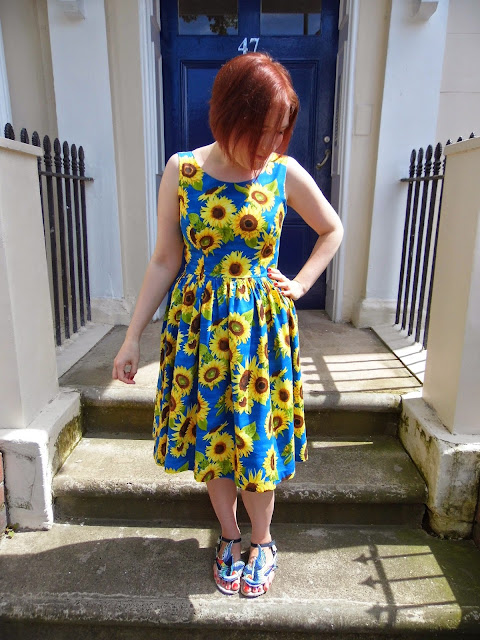 I'm pretty sure teenage me had a dress very similar to this - I think I bought it in Heatons in Monaghan! In any case, one of my favourite things to wear when I was 17 was a cropped t-shirt with a sunflower on it, and bell-bottomed jeans that had belonged to my friend Clare's mum in the 70s, with Gola trainers with rainbow laces. STYLISH. I wore that outfit to Clubland - along with a shoulder-length lilac wig I bought on a market stall in Blackpool when I went on holiday there with my best friend Emma and her family when we were 16 - a lot. So yes, when I saw this fabric, I really wanted to make a 90s revival dress from it!

The sunflower fabric is a Timeless Treasures quilting cotton. I bought it with a voucher from an online store and it was pretty overpriced - I think they were asking something like £16.50 a metre for it, but I had a voucher so I thought I'd get it anyway. The fabric took nearly two weeks to arrive, despite the fact that I paid for next day delivery, and the customer service was so rude and aggressive I'll never buy from this store again. It's a shame and it very nearly spoiled the fabric for me - don't you hate it when that happens?! But, the power of 90s nostalgia eventually won me over, and I am really happy with my finished dress. 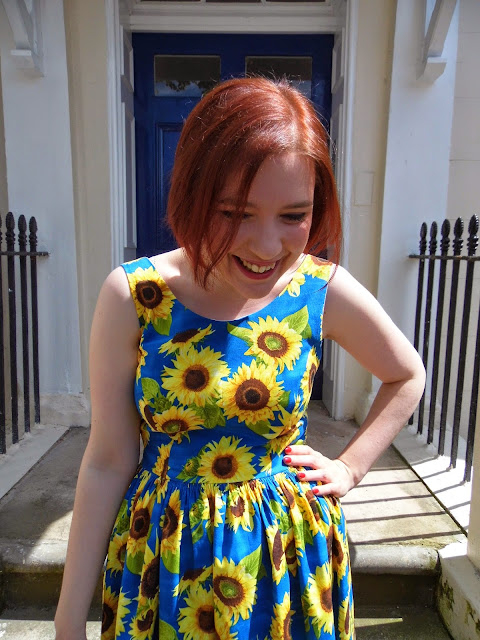 Construction-wise, nothing to say. It's an Elisalex with a gathered skirt, which is a lovely and comfortable combination. I used a lapped zip, which I inserted the Sunday before our wedding at the Berylune sewing social! I initially flirted with the thought of making this much more midi in length - but to be honest, it looked far less 90s-inspired and more like I'd robbed it from Clarissa Darling's wardrobe, so I chopped it to just below my knee. It actually looks sort of better with heels, but I'm just flat-out wearing my Bluebird sandals all the time at the moment so there we have it. 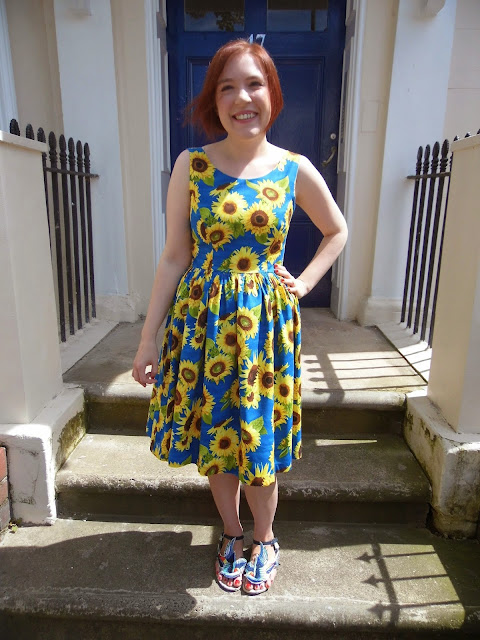 We've got a table in the corner that is always ours, under the poster of Morrissey with a bunch of flowers. We drink and talk about stupid stuff, then hit the floor for Tainted Love, you know I just can't get enough...

Wearing this dress makes me want to go out dancing, but sadly nowhere has ever really lived up to Clubland. I've never been in a nightclub since that has a tree in the middle of the dancefloor, a plaster panther in a cage or 'caves' - booths made from fibreglass to look like caves, complete with dodgy cave art. I've never been to anywhere else that does 'Blast Off' - at midnight for some reason, they lowered the light-fittings to the dancefloor, pumped in some dry ice and then raised them again. It was quite a spectacle. I've never been to anywhere else where the last song was Hey Jude and the challenge was to stay to the end of all the na na na na na na nas before the bouncers threw you you. Happy days. 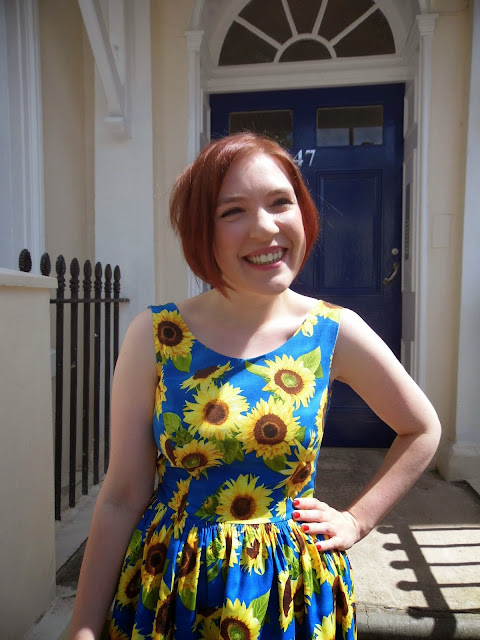 She makes my heart beat the same way as at the start of Blue Monday, always the last song that they play at the Indie Disco...

In the absence of all the things that made Clubland so unique, I'm away here to dance around my living room to Mr Jones by Counting Crows, another Clubland classic. Happy Friday, everyone!
Posted by Roisin Muldoon