I’m too tired to slap you, would you bash your face against my palm?

Heeeeeey! What's happening, everyone? I'm sitting here in my pyjamas with my head wrapped in clingfilm, eating chocolate biscuits. SUCH GLAMOUR. The clingfilm is because I have henna on my hair. It's not something I sit around and do to keep the alien thought waves out, or anything.

I use tinfoil for that, obviously.

Anyway - hope everyone is well and everything. I'm fine. Work kind of sucks this week (hence the pyjamas and chocolate biscuits at this time of the evening) but, you know, sometimes work kind of sucks. I had a lovely weekend with friends and even though it rained heavily ALL DAY on the last pre-Christmas bank holiday of the year, this just meant I got to make a dress and watch many, many episodes of The OC. So, yay?

The weekend was very cool, though. On Saturday I went to London and caught up with Janene, Amy, Marie, Katie, Emmie, Jen and a bonus Alana (who looked genuinely terrified when she ran into us all in A-One Fabrics on Goldhawk Road) to visit the Jean Paul Gaultier exhibition at the Barbican. I won't recap the exhibition because it's finished now, and I think there are probably a lot more insightful reviews of it out there on the internet, but it was fabulous. Not least because of its size - it was over two floors and there was just so much to look at - but also because you were able to really look at the clothes as none of them were behind glass. That was brilliant - especially when in a group of fellow seamstresses - although at one point, Jen and I did set off an alarm. Just a little one, womp womp. While we were there we had cocktails in both the Gin Joint and the Gaultier Bar - I mean, when you're around other seamstresses it seems that drinking gin is basically mandatory, right? 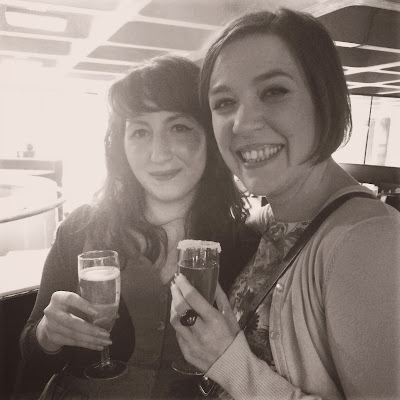 With Marie and our Gaultier-themed cocktails. If I already look a little bit drunk it's because I was.

It really was an incredibly fun day. I talked and laughed myself hoarse, threw back more gin than was strictly necessary, and ate the world's tiniest halloumi burgers. No photos because they were gone as soon as I looked at them but holy shit. I did not take 'mini' to mean 'microscopic'.  In an uncharacteristic burst of energy when I arrived back in Leamington at 10:30pm, I joined Nic and our friends Owen and Jane in the pub and we ended up having a very late night. 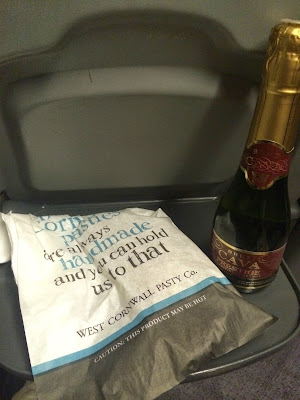 Train picnic. I think this is what inspired me to power on through to the pub

Yeah. I didn't do very much on Sunday. FOR OBVIOUS REASONS. It was a lovely boozy, funny and inspiring day. I love how much fun sewing has brought into my life. It really rocks.

One of the other things that rocks about sewing is when you spot a fabric you love and you know just what you want to make from it, and you make it straightaway. This is what happened after Nic and I went to Birmingham a couple of weeks ago. On our way over on the train I commented to Nic that I probably shouldn't buy fabric as I still have a fair bit of my Paris fabric waiting to be sewed with. Also, our flat is small and I genuinely don't like to have too much of a stash waiting around on me. I can't explain it, I just don't. But then we were in Birmingham and, you know, Barry's Fabrics and the rag market were RIGHT THERE, so I bought fabric. Ah well. You can't win them all.

Nic actually spotted this fabric. It's always good to have my fabric whisperer with me! It's 100% cotton canvas, and I just loved the colours. And yeah - I guess in 2014 the print is kind of hipster nonsense but that's fine. I like it: 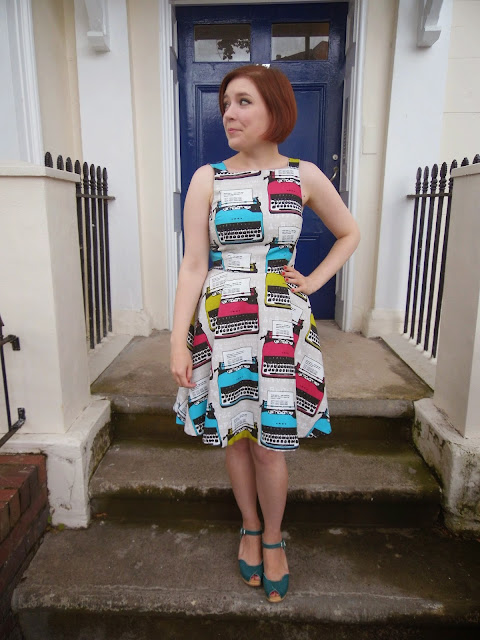 Another Flora dress. YEAH IT IS. That lovely pleated skirt seemed like the perfect match for this weightier canvas fabric. It has basically no drape - I mean, I guess it's actually furnishing fabric - which means that the box pleats at the back of the skirt really stick out. That being said, it was easy to work with and comfortable to wear. It frayed a bit, but nothing major. I bought 1.5 metres and was able to get the whole dress out of it with a pattern placement I was happy with. All good! 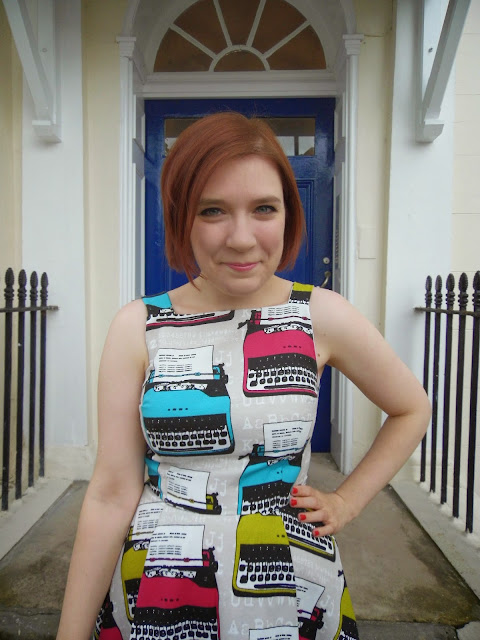 Yes, my dress does have typewriters on it, and I'm pretty smug about it. Thanks for asking.

Because this fabric is so much weightier than my usual cotton, the fit on this Flora bodice is a bit different to other ones I have made. So, to give you an example, the bodice I worked from here is the same size as the one for the Lauren dress. The bodice on that dress was - and is - a little bit bigger than I was happy with. And I've actually lost weight since then (ugh, seriously not a humblebrag, by the way, because it's really not ideal). The bodice on this dress isn't tight or uncomfortable, but it just goes to show you how much difference the type of fabric you use can make to the overall fit - even when you're not talking about a difference between wovens and knits.

Anyway, it's no biggie. The dress fits well and I'm happy with that. But isn't it weird how blogging can just make you so hyper critical of everything you post? I was going to post a back view so you could see the way those pleats stick out and give me total circus-tent bum, which is actually pretty cool. But, ugh. I couldn't. Sorry, guys. To be fair, you're not missing that much. 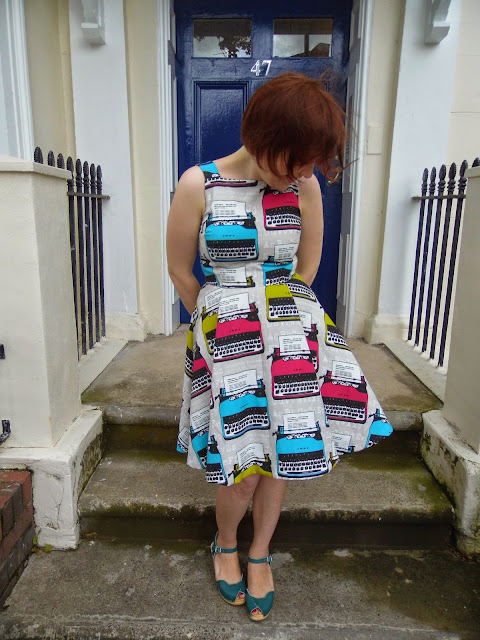 So here's the wind catching the skirt in a pleasing way, instead.

It was raining while we were taking these photos, and it's been raining today. It's not officially autumn yet, and actually I still think we're due a late summer rebound in September (we generally seem to get a week or so of really nice weather around the time that school goes back) so I am very firmly NOT joining the OMGSQUEETIGHTSBOOTSAUTUMN club. I'm not super in to sewing autumn/winter clothes, in fairness. That being said, the slightly heavier weight of this fabric will mean it should work well late into the year. The Madarch dress I made last November from Cath Kidston furnishing fabric was a favourite in the colder weather, and I expect this one will be too. It might even look pretty cute with pink tights. But, don't talk to me about woolly tights before then, seriously. I don't want to hear it.

Get out of here with your woolly tights. IT'S AUGUST, FFS.
Posted by Roisin Muldoon