Like when I say "Men are blinded by my beauty". They're not really blinded. They get their sight back in a day or two!

Hello beauties! How's the weekend been treating you? I was working from home yesterday on boring admin tasks, which was just as well as I was a little bit hungover after going out for dinner and prosecco with Rick and Lauren on Thursday night. I don't even think I had that much to drink, but this is just what drinking on a school night does to me these days. Man, I'm getting old! Thankfully I had recovered enough by dinner time to eat my dinner and then hem a pretty dress while watching a crappy film. The crappy film in question was The French Connection 2, and it was the only time I have ever had to say, "That film had too much Gene Hackman in it."

Today, Nic and I had planned to go to Rugby to check out the charity shops, go to the library (their library has a better comics section and a better craft books section than Leamington library) and visit a newly opened comics and milkshake shop (because WUT) but after almost an hour and a half of waiting for a bus that's supposed to come every half an hour we fucked the whole thing off and went to Birmingham instead. Really that was a much better plan, because it meant I was able to buy fabric, Nic was able to buy comics, and we were able to go back to Cherry Reds for that halloumi, mushroom and hash browns sandwich. A winner all round,  I think. The plan for tonight is to watch a better film and I might crack on with knitting the sleeves on my second Myrna cardigan. I sure know how to have a wild Saturday night, am I right?! I'm fine with that. Leamington on a Saturday night is genuinely disgusting. I'll stick to Thursday night pizza and prosecco.

But on the subject of knitting, here's a cardigan I finished last month. It's another Andi Satterlund Miette cardigan, and the third knitted garment I have made (I showed you my fourth - my pink Myrna - out of sequence. Because I'm a maverick like that, I guess) For some reason, after the first Miette I made being difficult because I was new to it, and then the second one being straightforward because I was getting my head around knitting, this one was really difficult again. I made so many mistakes on this one. It's Difficult Third Album syndrome. This is my Fables of the Reconstruction/Reconstruction of the Fables Miette: 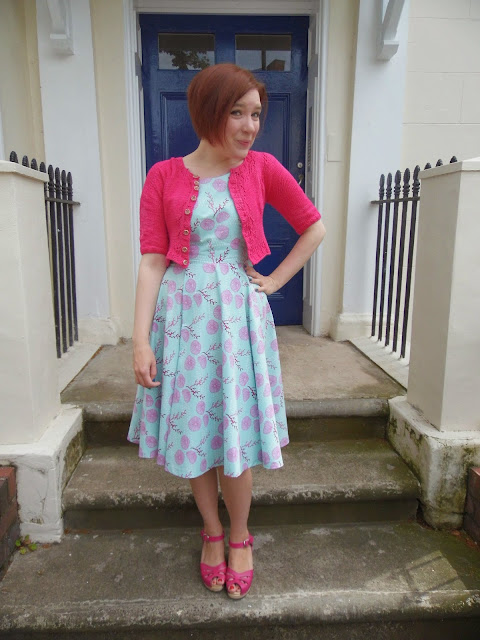 I knitted this in the exact same Rico cotton yarn that my Myrna is made from. Basically I had an assload of this yarn because the lady in the wool shop totally oversold me. I wasn't keen on the bubblegum pink colour and I didn't like working with the yarn so I don't really know WTF I was at when I was buying it! I bought some flamingo pink Dylon dye and, when the cardigan was finished, I dyed it. I figured that as the yarn was cotton it would take the dye pretty well, and it did! I dyed it in a bucket rather than in the machine so it's maybe not the most successful dye-job - I can see where the colour isn't as even as it could be. But I'm okay with that - it happened because I wasn't stirring the thing every fart's end as the instructions suggested - so really I'm happier with a slightly uneven colour than I would have been spending my evening standing in the kitchen stirring something. My aversion to doing that is why Nic does basically all of the cooking in our household. Unless he wants to eat toast. 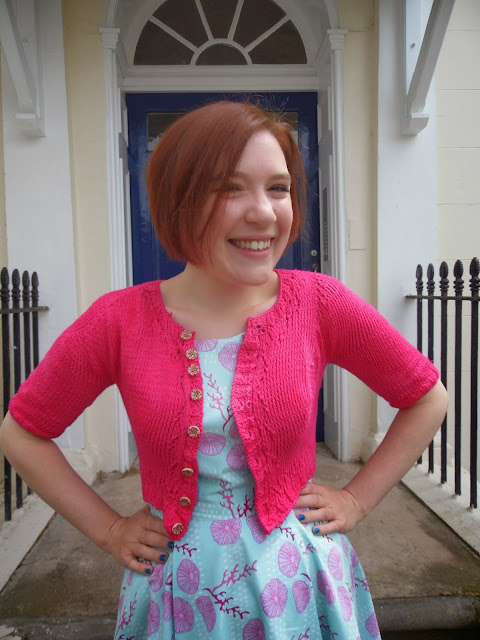 The cute floral buttons were a gift from Jo - they were part of my Hen Party Boke Bucket of presents, and they go perfectly with the cardigan! And, if I sound like I'm less than happy with my cardigan, I don't mean to. Making it was frustrating but worth it - a hot pink cardigan is going to work with many, many items in my wardrobe and I am really happy with how it looks. I'm getting better at accepting that I'm at a totally different stage with knitting than I am with sewing, so while this Miette definitely isn't as accomplished as many of the others out there on the internet, I'm still really pleased with it! I tell you what, though: no more Rico cotton yarn for me. Do not like. The wearing of it is fine but I found it really irritating to work with. 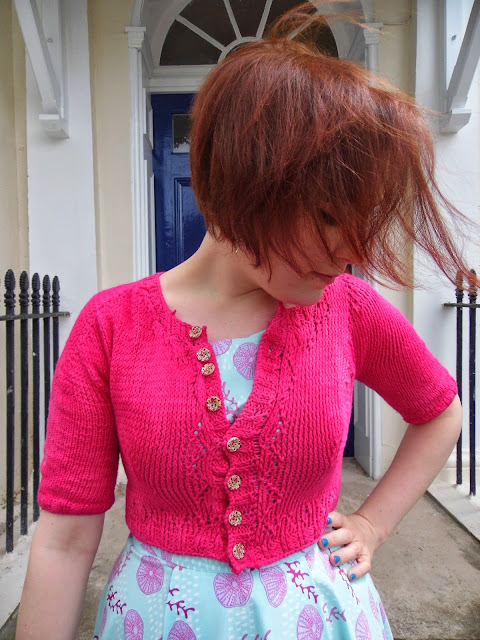 Here she is, buttoned up

In fairness to the cotton yarn, it is actually nice and comfortable to wear. This cardigan is pretty perfect for the current weather in that it covers me up and I don't boil in the sunshine, and it keeps the chill off me in, for example, aggressively air-conditioned train carriages. I wore this a few Sundays ago when Nic and I went for a walk through the fields to the Saxon Mill. I did wear those heels on the walk, but they were very comfortable. It wasn't some 'fashion blogger in fields' thing. I missed a chance to get a photo taken in the very pretty cornfield but to be honest, by that stage I just wanted to get to the pub. PRIORITIES, PEOPLE. 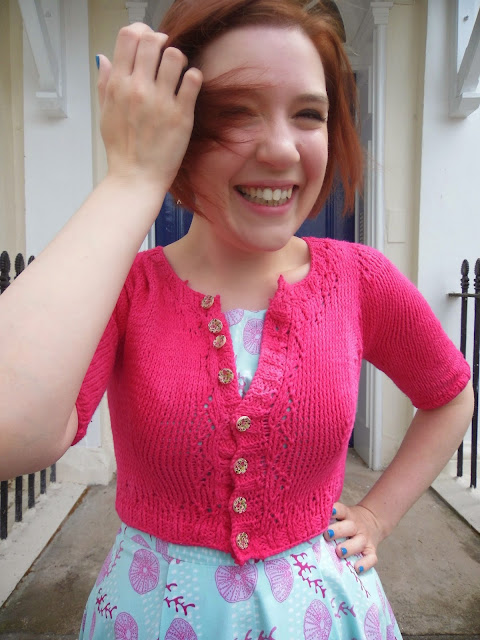 Anyway, despite my love of a good repeat, I have put the Miette pattern away from the time being. Once I have finished my current project, I'm getting started on another Andi Satterlund pattern, the Agatha, in some electric blue Cascade 220 100% wool yarn. I did try this pattern earlier this year but couldn't get my head around the pattern, but some expert advice from my friend Char got me going on it. So, in summary: yay!

So, that's me for the evening. I have to go and take the fabric I bought in Birmingham out of the washing machine. I also face the very important task of putting my pyjamas on and picking out a silly film for us to watch tonight. But! If you're in the UK and fancy reading a bit more of my writing - I have an article in this month's Love Sewing Magazine! It's out in shops on the 14th August. In fairness, it's mainly what you get here but without the swearing, but there is a pretty cute pattern with the magazine this month, so, you know. I'll just leave that bit of info there. Have a lovely weekend, all!
Posted by Roisin Muldoon