Ba-da Seuss, a palm caboose, and a panda hop, and pantyhose, you look buppity, buttons and bowwwws!

Hola! What's happening, folks? I have had an enjoyable midweek day off today for no other reason other than I could, and it's been lovely. I slept late, had lunch in the park with Nic, went to the library, had a nap in the afternoon and had a shiny new pair of shoes delivered. I had a mild and slow-burning hangover as a result of a slightly boozy evening with Sally last night, but nothing enough to slow my roll. Excellent day off fun.

Well, anyway, that's basically the craic with me! Thank you to everyone who commented so encouragingly on my last post about my too-big Cambie dress. In a fit of energy on Monday afternoon, I took it apart and basted it way in at the side seams. I didn't touch the darts initially because I wanted to see if just taking it in up the side seams would work - and it did! So that dress is now wearable and totally cute. Hurrah! I think I need to think about how to make the Cambie work better on me - I do think that if I make it again I will need to look at the darts - but I'm glad to have found a quick fix for my dress because alterations are BORING.

I haven't taken photos of the altered dress, but that's okay because I have a brand spanking new dress to blog about this evening. Whoop whoop! I made this dress on August bank holiday Monday, when it was so rainy and dark that leaving the house wasn't on the cards at all. Actually, I'd had such a fun weekend what with the Jean-Paul Gaultier exhibition and everything that staying in the house was no big deal and it was very good to have a nice big block of sewing time. I got down to sewing one of the lengths of fabric I had bought that Saturday on Goldhawk Road with the girls. Yeah - that whole not buying much fabric thing really isn't working out amazingly well for me, is it?! I bought two metres of this insanely patterned cotton poplin in A1 Textiles for £4.50 per metre. A bargain for 100% cotton and 60 inches wide, right? 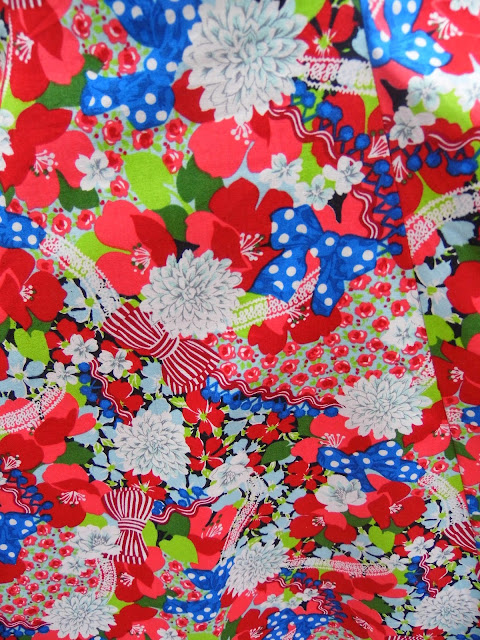 Er. Yeah. Basically this fabric needs to sit the fuck down. I know I have joked before about twee nightmares, and this is kind of it - flowers, bows, fucking polka dot bows, POM POMS... I think you can see why I had to have it. Janene remarked that she thought I must have some kind of radar for very me fabric, and maybe she is right. I love it because I mean, look at it.

Two metres is plenty for me to get a dress out of and because this fabric was nice and wide I had lots to play with, so I reached for Vogue V8998 once again. It's a bit more time-consuming to make because of the 7,000 skirt panels, but I think it's worth it. I like the pattern so much I'm tempted to buy its sister pattern, V8997. 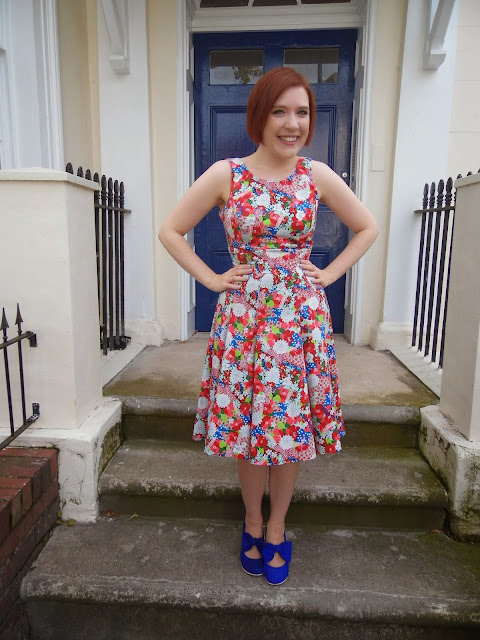 Ha ha! Oh, I don't know why I look so unsure in this photo but I am really happy with how this dress turned out. Maybe the slight rabbit in the headlights expression is just because I have a fairly stupid face. Anyway, after I had put the bodice together I had to do a little bit of tweaking to the princess seams in the front - I needed to take the seams in a bit over the top of my bust because I was getting a weird armour-plated effect there. I also pinched a tiny bit out of the front neckline which gives it more of a tank-top shape than it did previously, but otherwise the alterations I made to the pattern when I first sewed it in June stayed the same. 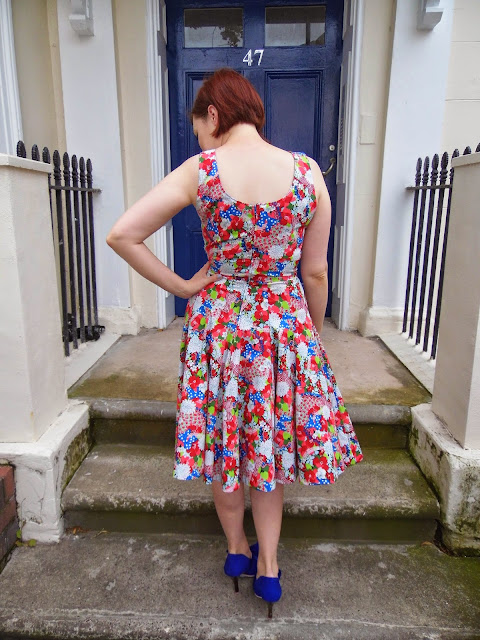 Back view! I love the scoop back on this pattern, I think it is such a pretty feature and it's something I'm always a sucker for in sewing patterns. I know I go on about how I don't like photos of my back - and dudes, I seriously don't, because I look so stupid - but I don't hate my actual back. 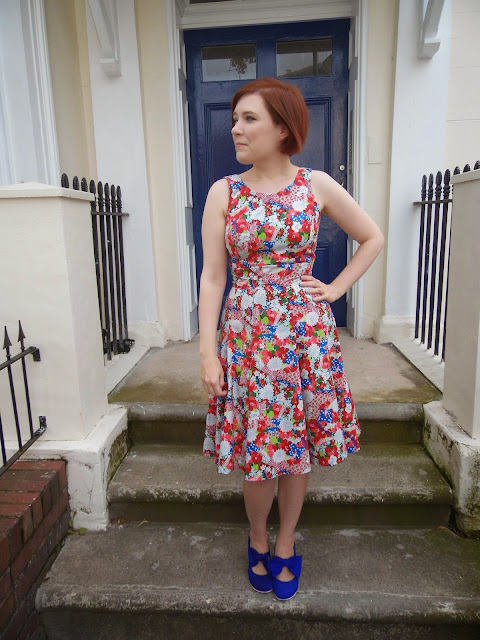 Here I am looking thoughtfully off into the distance, thinking about how stupid my back looks... no, seriously, I was probably thinking about what we were going to be having for dinner.

The absolute riot of colours in the print means I could probably wear this dress with most of the shoes in my wardrobe - as well as all the reds and blues, there are also pinks and greens and even black in the mix. Still, both times I've worn this dress since making it, I have paired it with these lovely royal blue heels - I think it's maybe that I enjoy the whimsy of wearing a bow-printed dress with actual bows.

I am such a dick. 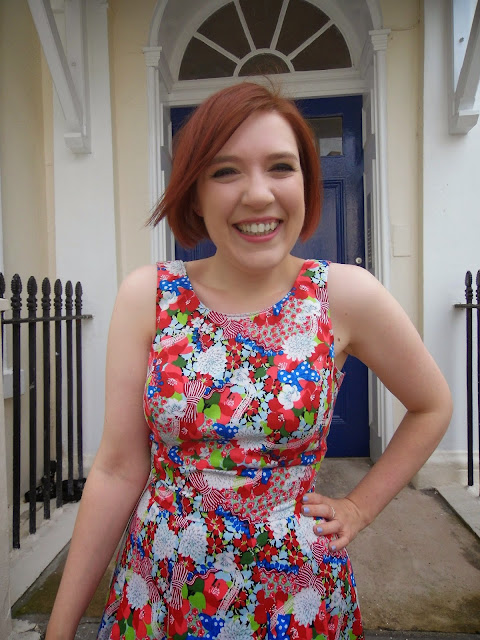 But you knew that anyway, didn't you?

Not too much else to say about this dress, really. Only that it's probably not suitable for eating a large meal in - that seamed skirt probably wouldn't have room for a big burrito, for example. But I'd imagine that it's very good for dancing in...

Let's all go to a... taco show!
Posted by Roisin Muldoon