I engaged in sexting, texting, and tex-mexting, which is when you take a picture of your genitals from the restroom of a Chili’s To Go.

Hey guys! I hope you're all having shiny happy Mondays. It's all good here because I have been working from home and the sun has been shining, and ALSO there's a cafe in town that makes Mars Bar muffins. To be honest, they're not as gooey as you might expect but that's no bad thing.

I've had a pretty good weekend. Nic was away in Amsterdam at a conference so I spent the weekend doing some of my favourite things: drinking gin, sewing, hanging out with Lauren, drinking prosecco and watching trashy TV. In fairness, the TV wasn't all trashy but I did watch basically 11 hours of Luther. I know I'm late to the show and it's mainly because I find Idris Elba's real accent (or at least, the British accent he is doing in the show) incredibly disconcerting. I like a good trashy cop show more than almost any other kind of TV show (see also my recent binge on the truly terrible Blue Bloods) and Luther ticked that box really well. It seemed really strange to me to begin with but that's partly because I had watched an episode and a half before I realised I had started watching the third series rather than the first one. Derp. Do I always pay 100% attention to what I am watching?

I think my favourite thing about Luther is the conversations that his colleagues have about him behind his back. Someone tells Saskia Reeves that Luther is 'nitroglycerine' - like, excellent dialogue there, dudes. I'm not ashamed to say I was heckling the laptop HE'S A MAVERICK COP GUYS OMG JUST DEAL WITH IT.

HE JUST HAS HIS OWN MORAL CODE OKAY.

Anyway, my weekend-long Luther obsession is really just holding me over until Wednesday, when the new series of Scott and Bailey starts. I found this out on Thursday when I was standing in line in the supermarket to buy pesto, and I did a little happy dance. Hurrah!

I guess Gill likes reading books about serial killers almost as much as I do...

So. That was my weekend. It's really just as well that I don't live alone, to be honest. As I said earlier, I did do a fair bit of sewing, which was really nice. I made two dresses and I altered three: including finally getting around to remaking my Lobsterlex dress. So I have some catching up to do on the blogging front! Here is a dress I made last weekend, when I had a fun sewing day with Sarah and Charlotte. We started with 'brunch'. I use the word advisedly, because we ate at 9am, which made that meal BREAKFAST, but whatever. Then we spent the whole day sewing and talking crap and watching TV. It was really good fun. 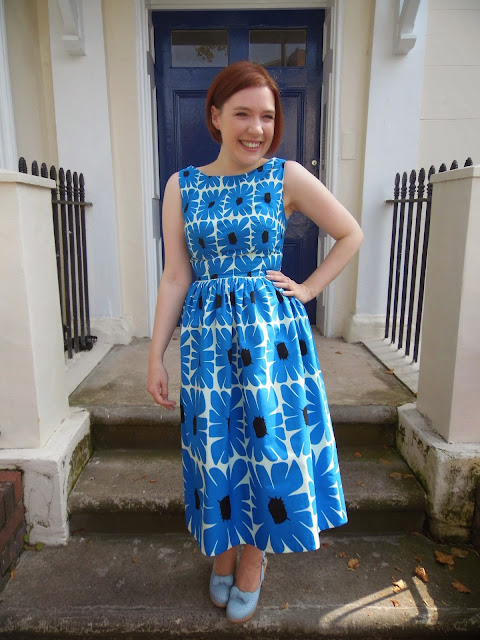 Soooo. The story of this dress is that I bought just over two metres of this border print fabric from Barry's in Birmingham when Nic and I had our little day out last month. I was drawn to the Marimekko-style flowers in the print and was tickled by the border print itself. It runs from the left selvedge to the right with the flowers becoming bigger in each row. It's a reasonably weighty cotton - probably a poplin - and I think it was around £5 per metre.

This fabric was kind of challenging to work with. I had a very specific idea of how I wanted the print to look on the skirt and on the bodice and in order to achieve this, I had to cut the whole thing on the crosswise grain. I also had to make the skirt significantly longer than I'd usually go for - it was either that or cut through the flowers themselves. I guess I could have made the skirt shorter by omitting that first row of flowers but I must admit, I kind of like the midi length. It's a bit different. 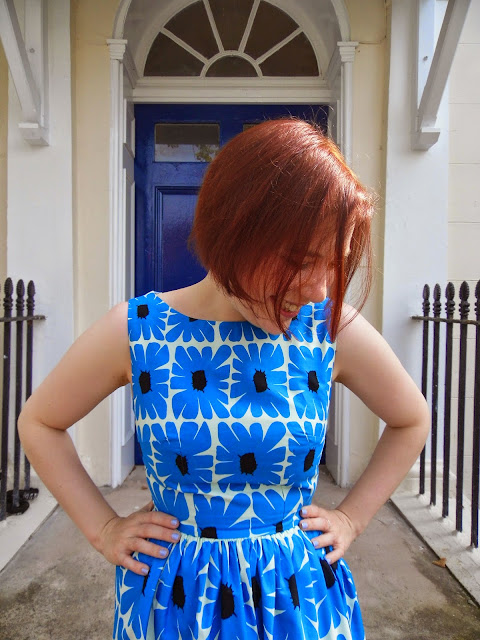 Cutting the bodice on the crosswise grain might not have been the wisest move. to be honest. It - unsurprisingly - affected the fit in an annoying way. There's no stretch at all so the bodice is very close-fitting and I had to buy myself an extra fraction of an inch by moving the zip out a little bit. I don't know how it looks to you guys - maybe it looks horrendously tight - and it's certainly closer-fitting than I would necessarily like. Still, it's wearable and I like it. 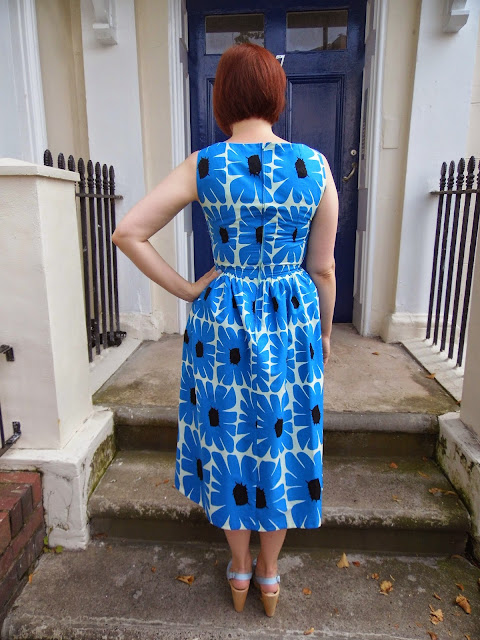 Back view - you can see where it's pulling a bit across the back. I certainly won't be wearing this dress to go out to dinner, or to lounge around the house in. Do you like my unintentional pattern-matching across the back, though? Look at that instead of the wrinkling, yeah?

Often I find that I like fabric much better made up as a dress than I did on the bolt, and I have to be totally honest and tell you that's not the case with this dress. I do like it, but it didn't really live up to the vision I had for it in my head. But, you know. You win some, you lose some.

I got some awesome new shoes, though. Check it outttttttttt: 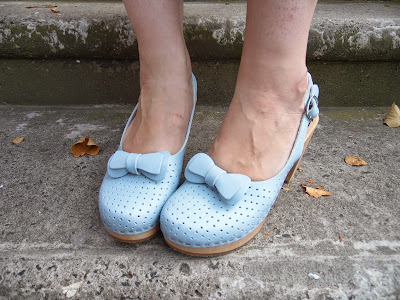 I bought them in the Swedish hasbeens sale and these were a pre-emptive strike. I ordered them the weekend before a shitty week, knowing that by Thursday I'd be in the market for a shoe-shaped pick-me-up, and it totally worked. They kind of look like old-lady driving gloves, but they're hella comfortable and I love the colour.  And yay new shoes, right? I confess, though. My stressful week did result in the hasbeens sale taking another hit from me, but that's a story for another blog post.

Anyway lads, I'm away here. I have dinner to cook. I'll leave you with another Luther gif though because, while it's silly and everything, I'm only human and he is a very handsome man:

I like to think he's applauding his own extreme handsomeness here.
Posted by Roisin Muldoon