My grandmother was missing that tooth and she was the most beautiful woman on her oil rig.

Hello all! Happy Monday! I hope everyone had a good weekend - I did. So good, in fact, that I spent all day yesterday in my pyjamas with a raging hangover. I came by it honestly, though, thanks to a lot of prosecco and gin on Saturday night with friends, and a living room disco until five in the morning. It has to be done sometimes and, after a stressful few weeks it was nice to cut loose. I had a bit of good news on Friday afternoon so I was ready to celebrate. I should know more next week and I can only hope for another hangover on the same scale!

So. If you're a reader of sewing blogs, I'm sure you're aware of the blog hop that's been going around about the writing process. I don't normally go in for blog hops, to be honest, but I have found every post I have read on this subject to be interesting. So when the hilarious Sue of A Colourful Canvas  nominated me last week, I was happy to take part. Here goes! 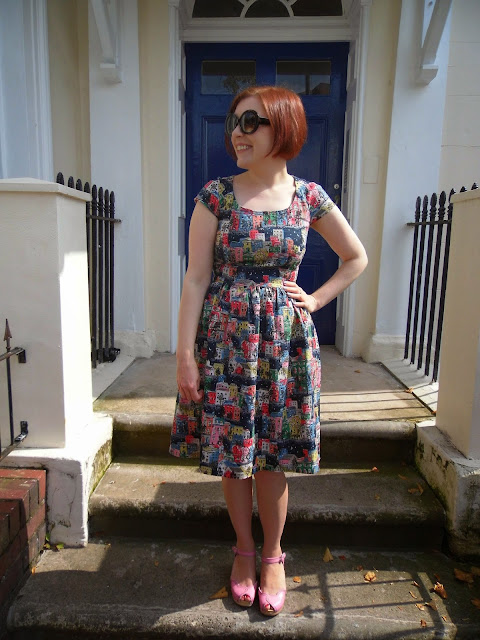 I BOUGHT this dress! It's from Cath Kidston and I bought it a few weeks ago. At one stage, I was only blogging stuff I bought but since I've been sewing that has felt increasingly weird. Anyway - I bought this dress because I thought it was cute. I rarely buy RTW clothes these days and when I do, it's usually because the print or shape is something I wouldn't be able to recreate myself. As it happens, fabric with this print is available to buy, but it's canvas rather than the soft barkcloth that this dress is made from. I like this dress a lot and have worn it a few times since I bought it. Oh and I'm wearing it with pink Swedish hasbeens heart sandals which are the cutest shoes I've bought in ages.

Before I had this blog, I had a blog on my university blog network that was mainly about me ragging on the PCGE course I was doing, talking about pop culture stuff and things that were going on in my life. When I think about it, I have always been a writer. As a small child I kept diaries and in my teens I was a letter-writer with lots of penpals. At school, my best friend Emma and I wrote each other hundreds of notes and letters and comic strips. I still have them all. I like to think that my cartoon drawings of our teachers, of Jim McDonald from Coronation Street (it's a long story) and ugly babies that look like potatoes predates my love of a well-timed gif. I write because I enjoy writing, and it's just a nice bonus that people like to read what I write. 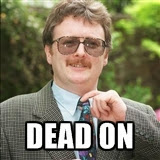 What am I working on now?
I don't have anything on the go at the minute. As I basically exclusively sew cotton dresses, which don't take very long to sew, I don't usually have UFOs hanging around. I'm hoping to get some time to sew a fun dress this week as it's my birthday soon and I'd like to have something new to wear. But if I don't have time, it's no biggie. I have a lot of clothes. I do have a few dresses in the queue that I'd like to get to soon: a v-backed Emery dress with short sleeves, from some cute fabric I have with elephants on it; a By Hand London Holly dress from some beautiful silk that was a gift from a friend; a Blue Gingerdoll Billie Jean dress, for which I haven't chosen the fabric yet and another Emery dress in some cute fox-print poplin I bought in Barry's a few months ago. I always have lots of ideas - I just lack the time to execute them! I also have a bit of a blogging backlog. For instance - I just never got around to blogging this Anna dress I made months ago: 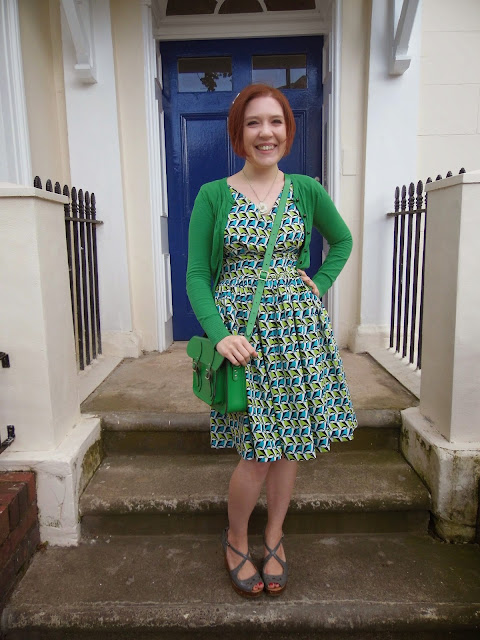 Birdie Loon dress - this is an Anna dress with a gathered skirt made from Cloud 9 fabric from Berylune. I made (and photographed) this months ago - maybe in April? Anyway, it was a little bit too big when I made it and it's bigger again now, and the moment for blogging it just seemed to pass. It's shame though, because it's very cute. I love the colours and the print, which looks abstract from a distance. I'm wearing it here with Topshop wedges, Hell Bunny cardigan and green Zatchels satchel.

How does my blog differ from other sewing blogs?
Ha ha! Okay, it mainly differs from other sewing blogs in as much as it's not really a sewing blog. Yeah, sewing is what I mainly write about these days, because it's how I spend most of my free time. Also, it's what most of my readers come for, I think - so it's why I have mostly stopped blogging about stuff I have bought. Well, that and the fact that these days I mostly wear things I have made myself. My blog is not really a sewing blog. I don't do tutorials, I rarely show you the inside of my garments - hey, once you've seen one nicely-finished seam, you've seen them all, right? - I have ZERO interest in writing a sewing book or being sponsored by a fabric store or setting up my own pattern company. I don't want to sew for a living, and I don't want to quit my day job to be a blogger. And, I've got to be honest, here, those aren't the blogs (or at least, the blog posts) that I like to read.

I sew because I love pretty clothes and I like learning new things, and I write about it...well, for the reasons I outlined above. I do write a bit about construction and I'll describe any fitting challenges I have had, but that's as technical as I'm apt to get. It's not to say that I dislike reading very detailed posts about construction or whatever, but that's not what my blog is about. I also like to write about what's going on in my life. I do get quite personal on here and I like other blogs that have a personal face. You all saw my handmade wedding dress, but I wrote a lot more about the wedding than I did about making the dress. This blog is about me. Sewing is just a part of that. I'm not going to lie: there are times when I have worried that I'm not serious enough about sewing, and that people out there might be judging me for being a frivolous, shit-at-sewing, no-overlocker-having basic bitch.

But then I remind myself that, you know. Whatever. I like it here. That's the main thing. 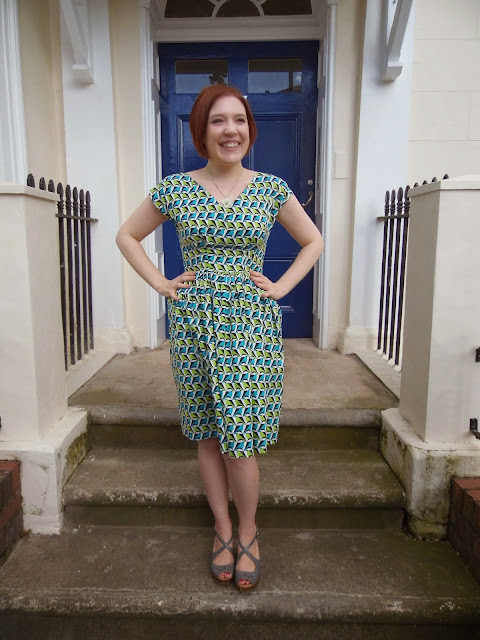 Another picture of the Birdie Loon dress - I feel guilty for never blogging it.

How does my writing process work?
Writing process is maybe a grand way of describing it, to be honest. I don't have as much time for blogging now as I used to. When I get the chance, I try to draft a blog post on paper or in an an email draft. I usually have a couple of posts worth of material waiting to be blogged, which means that even  if I am too busy (or ill, or whatever) to sew or get out and about, I have stuff to write about. Since Scott and Bailey has been back on TV I've been trying to carve out some time to write about that, because I love writing about TV but sadly, it's looking unlikely that I'll have the time to do that. Maybe I'll do a whole-series recap at the end. Anyway - yeah, then after that, it's just a case of sitting down and writing. It usually helps if I've been out and done something fun because, to be honest, I find just writing about sewing to be pretty dry. I like having news to share and stupid jokes to crack. One of the reasons why I'm not interested in being in a sewing store network or trying to write a book or anything like that is that I really value not having to have a system, here. I really value being able to write on my own schedule, and write about whatever the fuck I want. 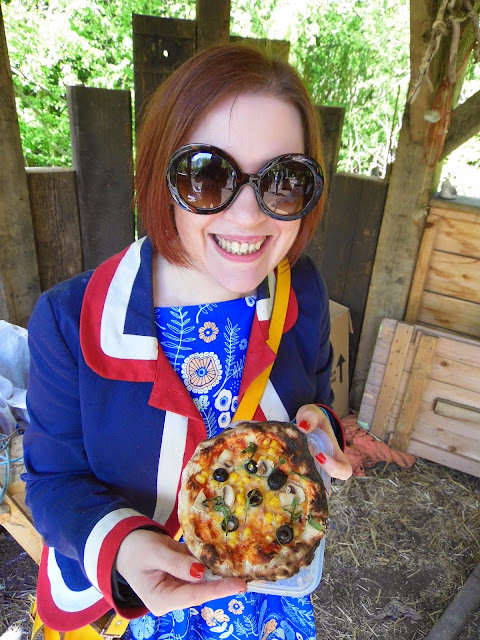 Here's me with a pizza I made in April. This is the only time you'll see something I have cooked on this blog, I swear. Even here, I didn't make the dough, like. I just rolled that shit out and threw a few toppings on it. It was tasty, though.

Anyway, that's the craic there. Thanks so much, Sue, for nominating me! Part of this process is I'm meant to nominate two other bloggers but this hop has been hopping around for a while so I'm going to take the coward's way out and throw this open to anyone who wants to answer those questions.

Anyway, I'm going to leave it here for the evening. I have a ton of ironing to do and dinner to make, and I think I might even be recovered enough from that epic hangover to chance having a cocktail with dinner.

...or maybe I'll stick to water for now.
Posted by Roisin Muldoon