She was multi-tasking. It's a thing women can do. Like smelling nice and wrapping gifts.

Happy Saturday everyone! I have to admit: I'm already in my pyjamas. Pyjamas and fleecy socks and a pair of sandals I'm trying to break in, and I have my glasses on. Nic asked me did I want to go outside and get some photos on the front step but I thought I'd spare you - and the people of Leamington - that particular delight. Still, though. I'm looking pretty smokin'.

Anyway.  I don't have a lot of craic at all today. I've had a busy and pretty stressful week. I had a big work deadline to meet, but after I did I celebrated by going to Ikea and then having noodles. I know that makes my life sound really sad and maybe it actually is, but I bought some fabric in Ikea and the noodles were really good. I also had my first ever steamed custard bun and that kind of rocked my week. Yeah, I know, I need to get out more. Especially as the main excitement of my week was the new series of Scott and Bailey starting on Wednesday night. I'm trying to decide whether to recap the episodes again this year - I know a fair few of you guys are also into cop shows too, so I might. Let's see if I can find the time to do the screen caps, I guess!

No sewing this week but after my sewing binge last weekend and the weekend before, that seems fine. As well as making a few new dresses, I have also tackled some alterations, taking in a number of dresses and completely reconstructing one. I won't show you pictures of the ones I have taken in, but I am pleased with the refashion of a very special dress - the Lobsterlex dress: 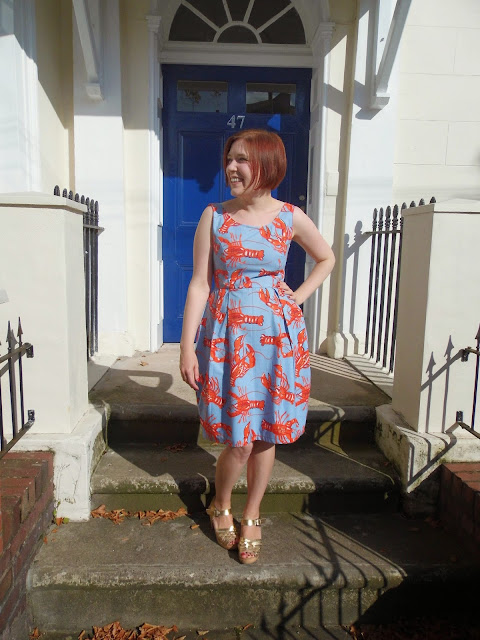 Yaaay! My Lobsterlex dress is back in action. This was the second Elisalex dress I made, back at the start of 2013. I loved it then and wore it reasonably often but it's been packed away for over a year now because it was just too big. After the success of the refashion of the Feckin Birds dress, I sat down and took this apart. It sat in my sewing box for a couple of weeks - for some reason the idea of sitting down and re-sewing it was pretty unappealing - but I finally got around to it on Sunday evening, with a couple of episodes of Luther for company.

I recut the bodice using the Elisalex pattern pieces I have re-traced in the last few months. This wasn't a perfect solution because the lines of the pattern pieces are slightly different across sizes, but it worked pretty well. I didn't recut the skirt pieces - instead I took it in at the side seams and matched up the box pleats by eye. I also cut about four inches off the length of the skirt because while the midi length worked when the dress had sleeves, I thought it would look better now with a shorter skirt. 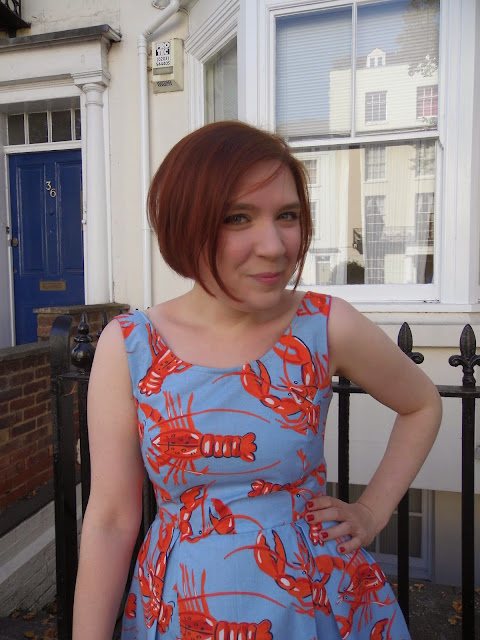 I'm so glad to have this dress back in rotation, seriously. I mean, I get that a dress with giant lobster all over it isn't exactly a wardrobe staple. Especially one with a ridiculously exaggerated tulip skirt! I know that a lot of people really don't like the skirt that comes as part of the Elisalex pattern but I'm very fond of it. On this particular dress, I think it just adds nicely to the overall crazy effect. In addition - this fabric just makes me happy. I got it at a swap at a Birmingham meet-up at the end of 2012 - I think it came from Marie - so I just have all-round happy feelings associated with it. 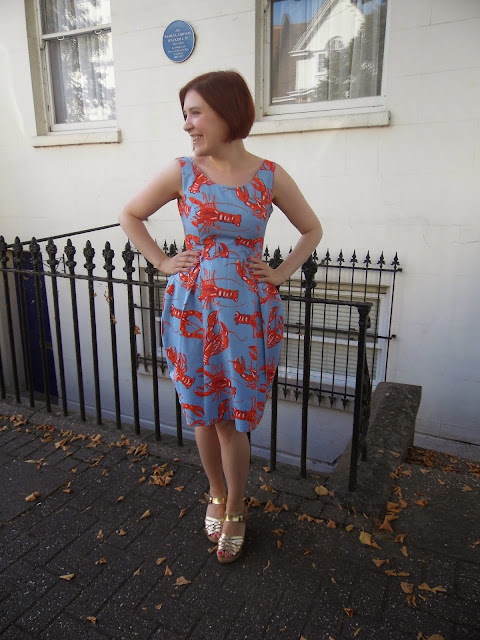 I've been able to wear this dress in this little late-summer comeback we're having. I think it looks really cute with my gold sandals! It's not going to be all that wearable when the weather gets colder but I did finally invest in some orange shoes this week, so maybe I can keep this dress in rotation through October, anyway. You know me, though. I'll be holding onto bare legs for as long as I possibly can. I'll still be running around in these sandals until there is frost on the ground. HUSSY FEET!

Anyway lads, I'm kind of at a loss for things to say this evening. I suppose there's not a lot to say about a dress I have made twice. That's the other thing about alterations - as well as being boring to do, they're boring to blog about! Isn't it funny though how boring alterations are. I had this dress in pieces - basically no different to having a new project cut out and ready to sew - but I really dragged my feet over it. I suppose I find the allure of the shiny and new just too much to resist. Which, you know, goes some way towards explaining the contents of my shoe shelves.

So, it's Saturday evening and I have gin to drink so I'm going to leave it here. I'll see you guys next week, maybe with a very serious, academic review of Scott and Bailey.