YO! It's FRIDAAAAAY! This has been one seriously long and stressful week so I am super pumped that it's finally the weekend, and finally payday. I guess someone (not me) bought too many pairs of shoes this month. So that is the craic there. This week has been pretty stressful, due entirely to some totally unnecessary work nonsense. Ugh. Not from my colleagues, but from a contractor - which makes it kind of worse. Anyway, I'll stop complaining because it's Friday now. YES.

In fairness, the week hasn't all been bad. I managed to sneak in a bit of sewing during the evenings, making my sister some bunting and making a second By Hand London Kim dress - I liked the dress I sewed to test the pattern so much I immediately wanted to make a second one. I will blog both of those once the pattern has been released, which is slated for the end of November. If you want to get a look at what the pattern looks like before then, the girls are running a pre-sale at the moment. I haven't been asked to mention that, or been compensated for mentioning it - it's just a very pretty pattern that some of you may enjoy!

This post is going to sound like a big By Hand London fangirl squee, I guess, because I'm going to show you another Elisalex dress I made recently. But I can deal if you can: I like this pattern a lot! As I mentioned in my last post, after buying the Cath Kidston 'Camden' cotton in Belfast, I decided to order a metre of the London buses fabric online the following week. Annoyingly, it's a very different beast ordering fabric online from Cath Kidston - the metre I bought wasn't very well cut and I ended up slightly short. No biggie, but it's definitely one benefit to buying it in the shop if you can. In addition, although both fabrics are listed as 'Cotton Duck', they're very different. The London buses cotton isn't nearly as suitable for dressmaking as the Camden cotton - it's much, much more loosely woven and it frayed like a bitch. Still - I think the end result is pretty cute: 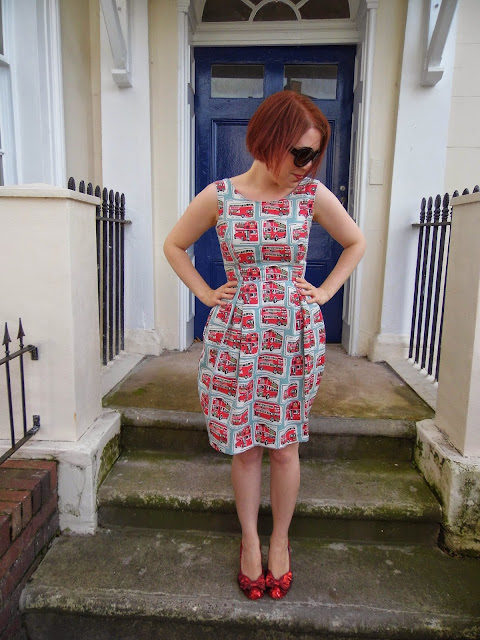 I made another Elisalex dress, this time with the pattern's box-pleated tulip skirt. That skirt works really well with this weight of fabric - or at least, it should. This fabric had slightly less body than I was expecting, especially after I had pre-washed it. But anyway, it does hold the shape of the skirt pretty well.

So, this dress wasn't super fun to make. As I said, the fabric really frayed when I was working with it and I was kind of irritated that it was (in my opinion, anyway) of so much lower quality than the other Cath Kidston fabrics I've worked with. But, you know, the buses are pretty cute. And also I have the pencil case with this print on it - so now I have a dress that matches my pencil case. So now that's a thing? Anyway - I think it's mostly a success. I did take photos of the innards this time. The bodice is lined, and I enclosed the skirt seams with red bias binding, and I finished the hem with it also: 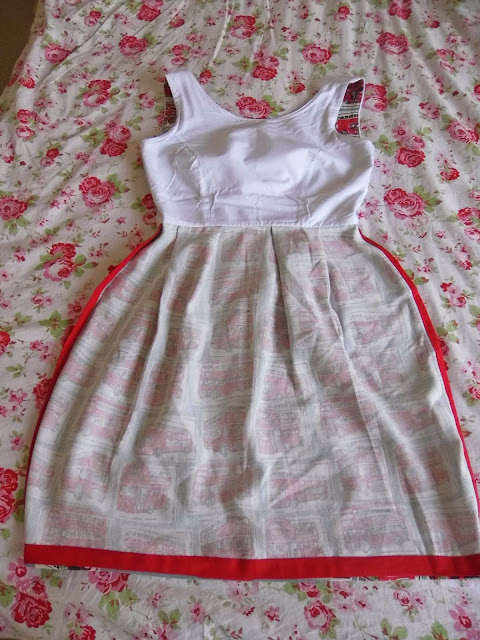 Despite my reservations about the quality of the fabric, I am happy with my finished dress. I love the print and the colours, and I really like the shape of the dress. I tried on the barkcloth version of this dress that Cath Kidston sells and while I liked it fine, I didn't love it - I ended up buying the Townhouses dress that day - so I am glad I made my own. 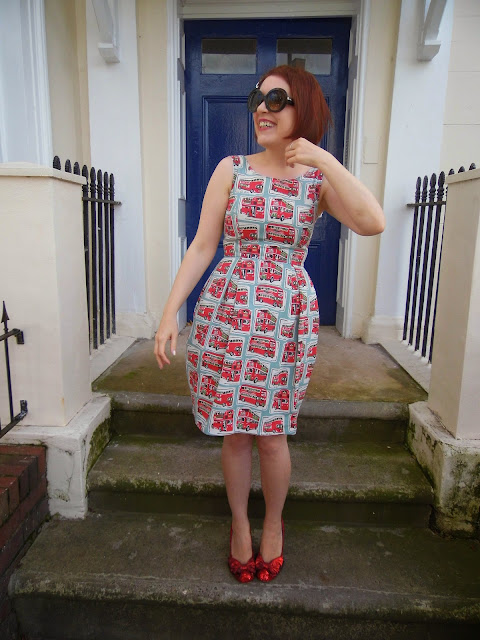 Got to be honest - not sure what I was doing in this picture, but it does show off the shape of the skirt pretty nicely. So, in it goes!

Cath Kidston has a store on Piccadilly, but that's not what this dress is named for. I never really got to know London until I stopped teaching in 2008 and started working for the now-closed QCA. At the time, the agency was in the process of moving its office to the midlands. I was officially based in the midlands office, but many members of my team were based in the London office and I worked there once or twice a week - increasing to four days a week throughout 2010 and 2011.

Apart from a few day trips to London, I'd never really spent any time in the capital so to go from that to suddenly working there was a pretty big shift for this country mouse.  It was often a stressful time - particularly in 2010 and 2011, when I was also dealing with pretty intense anxiety issues - but I really loved working in London - at 83 Piccadilly - and I very often miss the building I worked in, the people I worked with and the organisation I worked for. I'll always cherish that time in my life, though - even with the difficult things that came with it - and I really value the confidence working there gave me when it comes to London. I still work in London occasionally - although QCA is now long-gone, I'm still working in an organisation that is split across multiple cities and with a team who are partly based in London. It's not the same, though. While I genuinely enjoy my job - in fact, in many ways I enjoy it much more than the job I had at QCA - I don't feel the same way about the organisation I work for now.

83 Piccadilly was a pretty awesome building to work in, too. The building I worked in is no longer there - it's been torn down - but it was very cool all the same. One of the meeting rooms on the ground floor was (apparently) bomb-proof. I heard rumours that there were secret tunnels underneath the building connecting it to the Houses of Parliament. It looked out onto Green Park, Buckingham Palace and was across the street from The Ritz and Fortnum and Mason, and around the corner from Bond Street. When gun salutes were fired (I think they're fired from Hyde Park) you could feel the walls of the building shake. And, kind of best of all, there was a roof terrace which was a great place to have lunch and enjoy views over the city. Working there made me love London.

Anyway, that's all very long-winded. I guess I am feeling sentimental today! Here's a picture of the bodice of the dress, just to shake things up a bit: 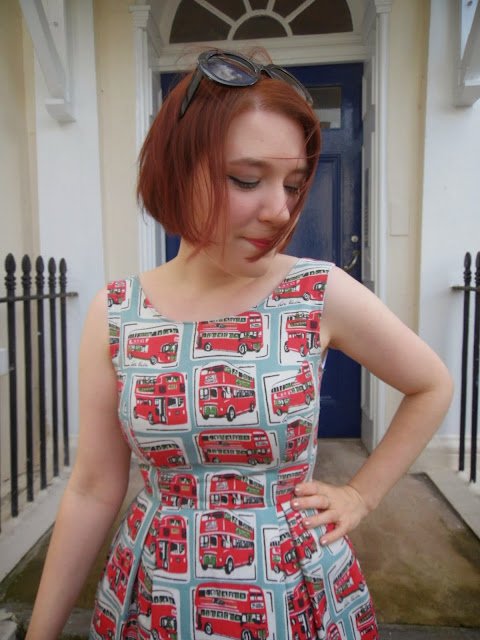 It kind of annoys me that this fabric has Cath Kidston's actual name on it. Like, calm the fuck down, Cath. You don't need to sign every damn thing, you know.

So that's the craic with this dress. I wore it a couple of Sundays ago to have a stroll in town. From about the middle of October, the Parade is closed off most Sundays for markets. They don't usually start being much good until closer to Christmas but all the same, it's nice to have a look around them. It was - and still is - mild enough to wear a light jacket and my ever-present cardigan with this dress: 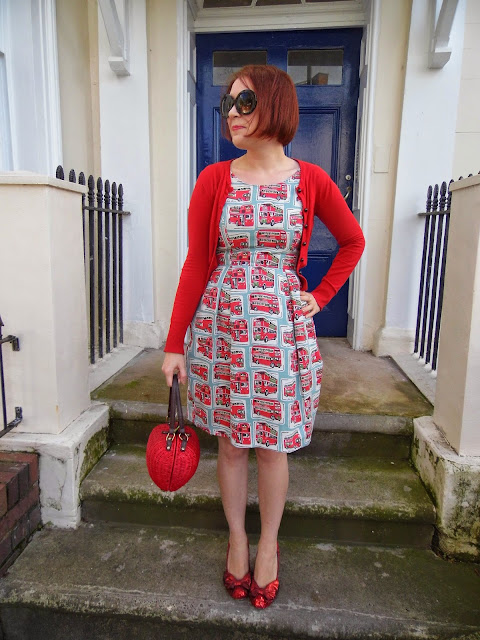 I was really going all-out here on the twee accessories with my Ollie and Nic apple bag as well!

Right-o, that's all the jazz out of me today. My lunchtime is drawing to a close and it's time to get back to updating spreadsheets. But after that it'll be time for noodles, and wine and maybe I'll even do some sewing over the weekend! Have a great weekend, everyone.
Posted by Roisin Muldoon