Some little girls grow up wanting ponies; I always wanted to be a widow.

Hellllooo! I guess it's only been a week since I last posted but it feels longer, probably because it included a little mini holiday to visit my family in Northern Ireland. We were only home for a long weekend but managed to fit so much in - it was wonderful. It was my nephew Fionn's first birthday and my other baby nephew, Joe (who will be one next month) walked for the first time. This was really exciting because we were there to see it - my mum looks after him during the week while my sister is at work, so we were there when it happened. We had lunch with my sister in her new house, dinner with my aunt and I even had time to fit in a little bit of fabric shopping in Belfast with Kerry from Kestrel Makes - who happened to be visiting her family at the same time.

Being at home while Joe was there was pretty intense. He's an incredibly active baby - he never stops moving - and he's very funny and charming. It was wonderful and exhausting and emotional. It was very emotional and I got a bit teary on the flight back to Birmingham - because I'm not sure when I'll next be home, I know the baby I got to know so well over the last few days will be very different! It was emotional also because I don't want to have children of my own. Spending so much time with Joe (and the shorter time we got to spend with Fionn) hasn't changed that - if anything, it's made me more sure that it's not for me - but it also made me really realise what I will miss. I'll get lots of the good stuff by being an aunty, though, so it's not a sad feeling - it just felt like pretty grown-up thoughts. Still - if having grown-up thoughts gets the fucking Iggle Piggle song out of my head, it's all good. Because seriously, how do you parents cope with that and Balamory and all the rest of it?!

So anyway, that's the craic there. I had yesterday off work - and I spent it in a very domesticated fashion by cleaning, cooking and sewing - and then it was back to work with a bit of a bump today. It's all good though - I finally got my letter from HR confirming my promotion (email from Nic about the delay said, "I imagine it's like the Vatican in Father Ted over there" and he's not wrong) and, you know, it's nearly the weekend. And here's a wee new dress to blog about too! It's taken me long enough to get to it, right?

This dress is the result of some pattern testing I did recently for By Hand London. Victoria emailed and asked would I be interested in testing the Sabrina dress, which is a new pattern that's available in PDF only. Now, I've got to tell you. I am not a fan of PDF patterns. At all. I mean - I get that they are convenient for a lot of reasons, I do. But, god. I REALLY hate taping those fuckers together. Like, seriously. I bought the Sinbad and Sailor Hepworth dress a couple of weeks ago and haven't even printed it out yet, that's how much I hate doing it. So I can't compare the PDF experience here against other PDF patterns because I avoid them. This one was fine - I received it already printed out, and I guess taping it together wasn't all bad. It was pretty easy. I still bitched about it to Nic while I was doing it, though.

The Sabrina dress comes with two variations. One is a strappy, princess seamed dress which buttons down the front. It's cute, if that's your thing, and it's very now as the 90s are back in again. It really called to mind that fashion of wearing strappy baby-doll dresses over t-shirts: 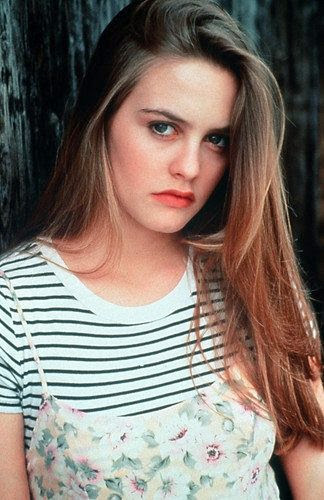 It looks great on Alicia Silverstone here - man, what doesn't - but it's not very me. So I went for the other variation, which is a princess-seamed a-line dress.

As I was testing, I sewed the dress according to my measurements and, initially, without any fit modifications. I cut the size 10, which is grand around the hips and waist, but I ended up going back and taking the princess seams in substantially around the bust. So when I sew this again, I'll cut an 8 at the bodice and grade out to a 10 elsewhere. 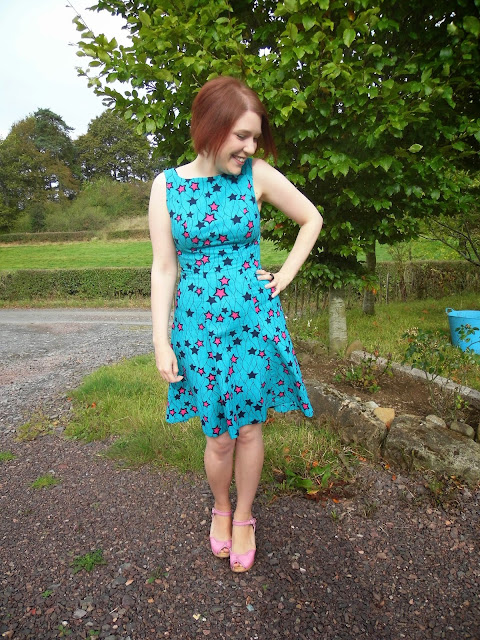 The fit on this dress is far from perfect. I forgot to get photos of the back but there's a little bit of gaping at the back neckline and I have some fabric pooling at the lower back - which I'm not really sure how to fix on a dress that doesn't have a waist seam. By Hand London are going to be running a Sabrina sew along so hopefully this is one of the fit adjustments they'll cover. The day I had these photos taken I was a little bit bloated - it was a VERY indulgent weekend - so it looks tighter around the waist than it really is on a normal day. But I think that the princess seams allow for lots of tinkering with fit, even for a fairly lazy fitter like me, so I'm confident that I can make this work. 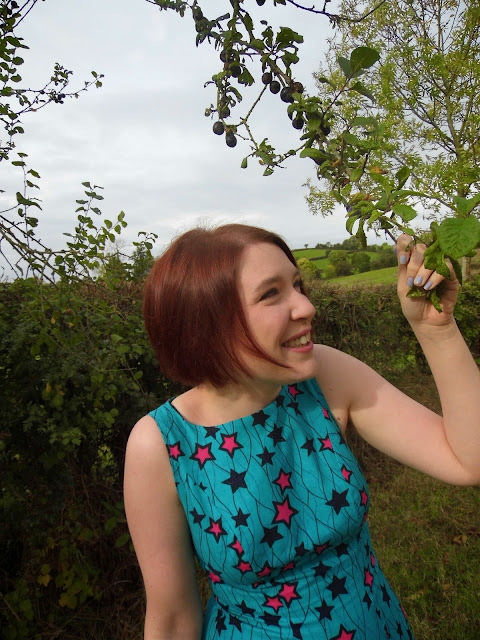 Here's an arty close-up of the bodice. I'm pretending to pick plums. DISCLAIMER: I didn't pick any plums, although I did pick an apple from another tree the following day. You can see I could probably do with taking some width out of the neckline too, but that's no biggie. If the fabric looks familiar it's because I already have a dress made from this cute star-print Ankara - the Bedelia dress. I had 5 metres of it, so more than enough for two dresses! 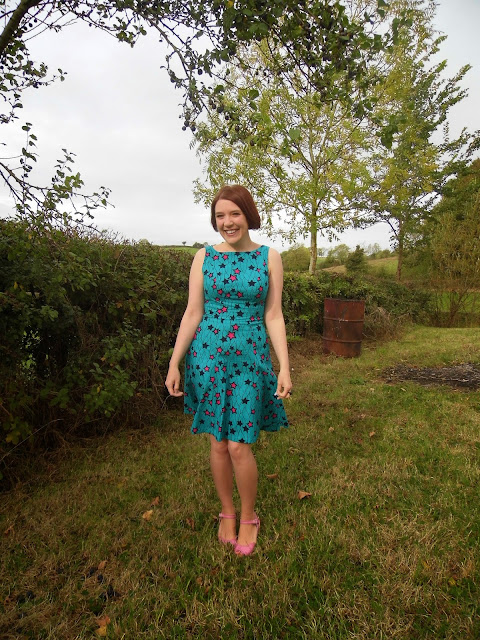 Do you like my background props? There's a blue bucket in one photo and this barrel in the other. That was totally intentional and very significant. Also, I think this might be the worst and most goofy photo of me ever, which is why I felt the need to include it.

I wasn't overwhelmed with love for this dress when I finished it, I must admit - mainly because I still have some way to go on the fit and also, it didn't look amazing on the hanger. I do like it on, though - I wore it on Sunday to go for lunch and to my nephew's birthday party (see comment above about indulgent eating!) and it was comfortable and I felt cute in it all day. I like the a-line shape, which is a bit different to my usual full-skirted silhouette. I like the above-the-knee length and I think this dress will work as the weather grows colder. It'll look good with tights, I think. And I have plenty of pink shoes. I have some pink tights squirrelled away somewhere that will make me look like some sort of mad lollipop when it gets colder.

So that's the craic with the Sabrina dress. It's not an unqualified success - I'm thinking of this as more of a wearable toile. There's definitely potential there, I think. I enjoyed pattern testing this dress, also. The turnaround was quick and - well, I've already told you about the crabbing I did about PDF patterns in general. I like slowing down and thinking about sewing in a slightly different way and although the turnaround time was reasonably short, the deadline didn't stress me out. I wasn't asked to blog about this dress or promote the pattern in any way - but hey, it's a finished object and I like it, so there it is.

Now, I have dinner to make and things to do so I'm away here. I'll catch you guys soon!
Posted by Roisin Muldoon