Toscanini? Arturo Toscanini? That's the WORST recording of 'The Magic Flute' there's ever been! I wouldn't even let it in the house!

Hello! It's Sunday of another week that has kind of managed to get away from me. It's been a funny week: I've had a horrible cold for the whole week, which is showing no signs of shifting. I've had a busy work week, public transport issues and I fell down the stairs on Thursday and hurt my arm. A colleague who I don't see very often asked me on Tuesday if I was pregnant and, when I said no, continued, "Are you sure?" Which, you know, didn't upset me as such - I laughed it off - but it was far from my favourite interaction of the week. So I've been sore and sniffly and presumably looking like I'm smuggling a baby bump. NOT THE BEST.

On the plus side for this week was lunch with my friend Lucy, buying some fabric, a dress and some silk pyjamas (excellent for going to bed in the afternoon to read John Wyndham novels when you're feeling snotty) and two good nights out this weekend. So I think it has all balanced out, even if my arm is still sore.

Today I'm going to show you a little dress I made last week. I'm still tinkering with lowering the back neckline of the Emery dress and, after getting there with the Lotus Bleu dress, I decided to try adding sleeves. I was given three metres of this lovely elephant print cotton, so away I went... 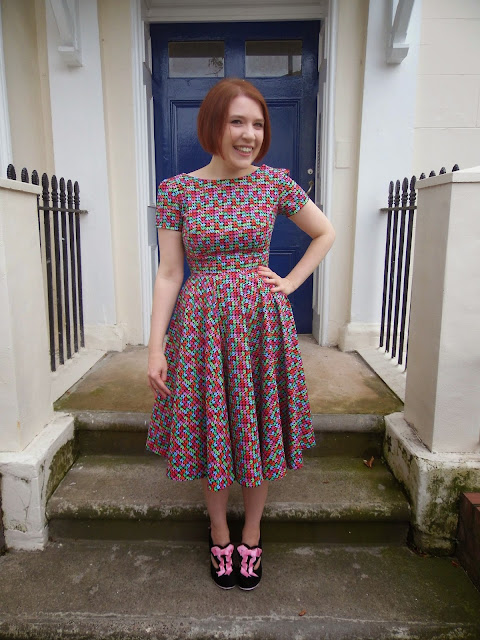 Awww maaaan, I look super goofy in these photos! But basically - yeah, this is another Emery dress with a circle skirt and a lowered back. The fabric is really cute and, while I don't often sew with black, it appealed to me as potentially a good wintery fabric. I wore my now too-big One Good Turn dress constantly throughout the winter I made it - it looked great with red tights, pink tights, black tights, blue tights - and I think the multi-coloured print of this dress is going to do the same thing. 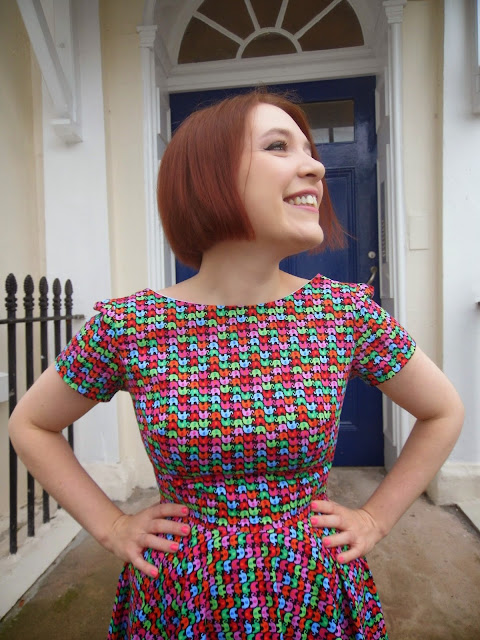 Bodice view - ignore my silly face and look at the leeetle elephants. They're cute, aren't they?

I saw my aunty M when I was at home a few weeks ago. She'd just come back from holiday and was telling me that she had bought an elephant ornament as a souvenir. Apparently they represent good luck if their trunks are pointing upwards. Well, I haven't checked every single one of the elephants on this print, like, but the ones I can see have their trunks pointing upwards to I'm taking that as a good sign.

Elephants are also significant to my adopted home-town of Leamington Spa - the Victorian elephant trainer Sam Lockhart lived in Leamington along with his troupe of elephants. The most well-known of these were the Three Graces: Wilhelmina, Haddie and Trilby. It's unverified local folklore that the elephants could frequently be seen walking on the parade and being bathed in the River Leam but whatever the truth of the story, it's a charming myth that is attached to the town. The elephants have even been commemorated in various ways - there's a Wilhelmina Close on Warwick Road, a sculpture of the elephants in Jephson Gardens and a truly horrible painting of them in the covered walkway at the railway station (that painting isn't even the worst of the ones there. I love them.) There's also a fantastic bakery on Regent Street named after Haddie and Trilby which, while not my favourite bakery in Leamington, does do an incredible sourdough pizza. 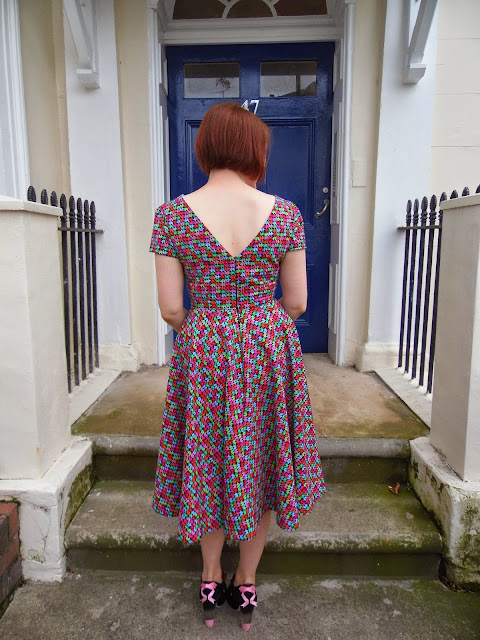 OMG never mind my back, my bum looks fucking HUGE in this photo. Ah, circle skirts. Thanks. (I actually have quite a small bum) But anyway, there's the dropped back. I'm pretty happy with it! Of course I didn't try to pattern match these millions of elephants. Ain't nobody got time for that. 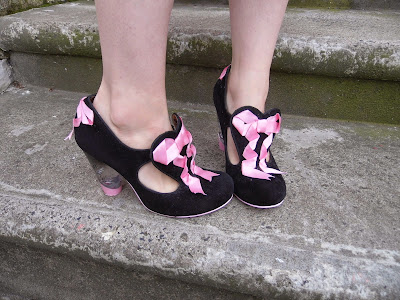 It's shameful how little I have worn these shoes since I bought them like, last May? In my defence, black velvet shoes with pink ribbons are kind of hard to wear, but anyway, I thought they went pretty well with this dress. So, basically: success! 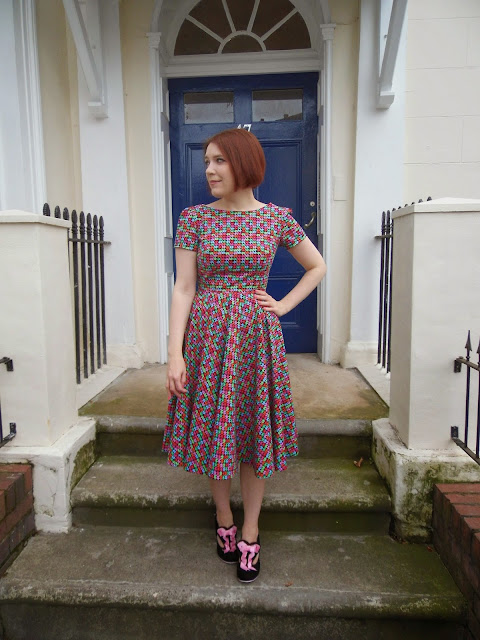 So anyway, that is the craic with this dress, and with life at the moment. I think this coming week is going to be similarly busy but hopefully without the injuries and delays of last week. And maybe this cold will take the hint and push off, as well. I can but hope.
Posted by Roisin Muldoon