I hope there was enough shark meat in the refrigerator for one of your sandwiches.

Hola! What's up, my friends? All good here: after a fucking crazy week last week I had a very restful weekend and, so far, this week has been moderately good. Maybe my expectations are lowered but to be honest, I think they're lowered all round. Nic and I watched the Liam Neeson film Non-Stop over the weekend, partly for the lols, but I ended up genuinely enjoying it. Yeah, it's silly, but Liam Neeson having a shoot-out with bad guys in a depressurised airplane cabin? That was awesome. And I love Liam Neeson. Even when he's in bad films (such as The Grey or The Phantom Menace) or flat-out hateful ones (such as Batman Begins or Love, Actually) he's always the best thing about them. I was going to find a funny Liam Neeson meme to put here, but I haven't seen Taken so none of them actually make sense to me. Ah well.

Yeah. So, the craic. That is it. I did also clean the kitchen, make two different dinners and bake a cake over the weekend. I clearly had some sort of psychotic break because spending time in the kitchen is not something I'm normally interested in - luckily Nic is the domesticated adult in our relationship - but mainly I spent the weekend reading and sleeping and trying to keep warm. Despite my best efforts, I can no longer ignore the fact that it is cold now and I have to wear tights and my eleven million pairs of sandals are going to have to wait until the milder weather. I'm still going to photograph finished sewing projects outside - lighting and all that - but, yeah. It's cold now.

I wore and photographed this dress the weekend before last, when it was still pretty mild. I very rarely buy sewing magazines, mainly because I'm not at all interested in sewing children's clothes, homewares, quilts or accessories, but I did buy last month's Sew magazine because the pattern that came with it is one I've wanted for a while. It was kind of stupid really because the magazine is (in my opinion) not worth reading and I could have bought the pattern cheaper on sale somewhere. Eh. The magazine was a bit of a diversion, and the pattern is pretty cute. It's Cynthia Rowley for Simplicity - 1873: 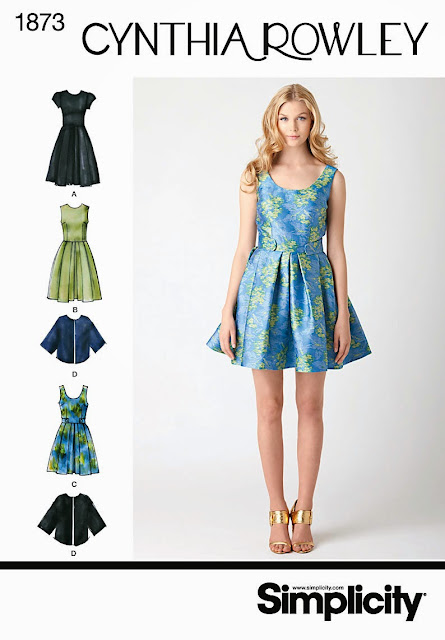 Now, I have to say, I was primarily attracted to the technical drawings of this dress. I don't know about you, but I think there's something really sad about the envelope image, although the fabric is lovely. The skirt is pretty cool: there are a few panels, which gives it fullness and body, and I like the pleating. I didn't have enough fabric to do this, and I mainly wanted to try the bodice out, so I used a simple gathered skirt on my version. I will go back and try the skirt, though! 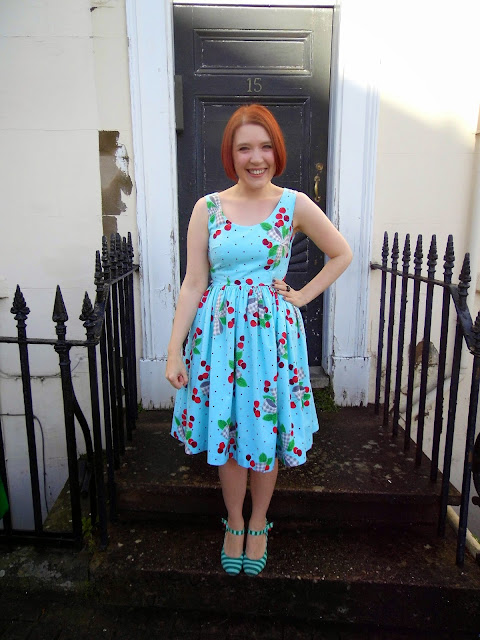 The fabric is 'Cherry Jubilee' by Michael Miller and was a surprise gift from Sarah when she was clearing out her stash a few months ago. It sat in my fabric box for a fair bit while I tried to decide what to do with it. Although cherries aren't christmassy, there's something about this fabric that seems festive to me, so although the dress I made is sleeveless it does feel a bit seasonal to me. 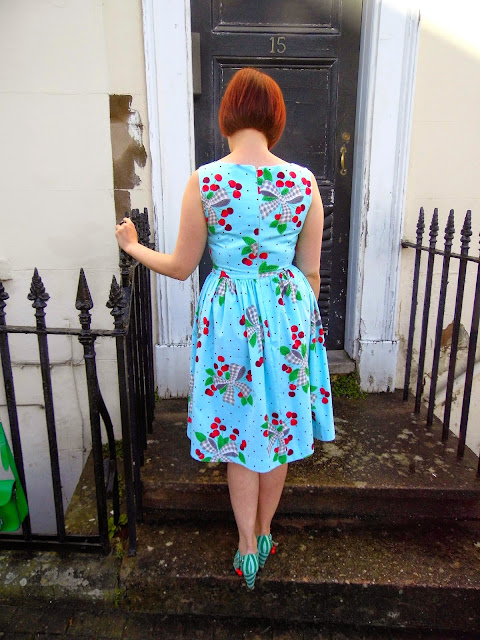 Back view. I don't hate this!

The pattern itself was grand to sew. I took a chance at not toiling this one because I don't usually find I have to do much to Simplicity patterns to get them to fit me. I sewed the size 10 based on the finished garment measurements but it ended up - well, not being too big, exactly - just big enough to look a little bit frumpy. I went back after I had finished the dress and took it in at the side seams. It's not an ideal fix but, as I hadn't made a toile, I'm happy to treat this as a wearable toile. Next time, I'll toile the size 8 and go from there. 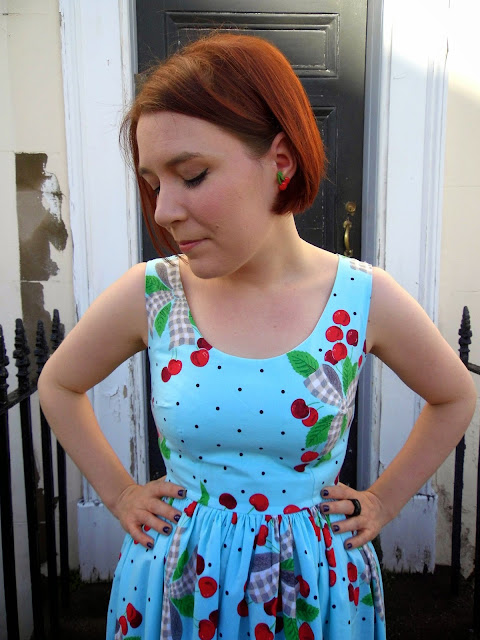 Bodice. I look a bit bald in this photo and, welp, there's a dart there that could have been pressed better. But do you like my cherry earrings? I got them in a shop in Folkestone and I think they might be made out of that Fimo clay.

There will be a next time. Despite the few issues I had - which were mine, not the pattern's - I really like this bodice block and I am looking forward to trying it out with the skirt from the pattern. It's not vastly out of my comfort zone, of course, but I like the lower neckline. For a pattern I got for 'free' (except not really) I think it's all good. 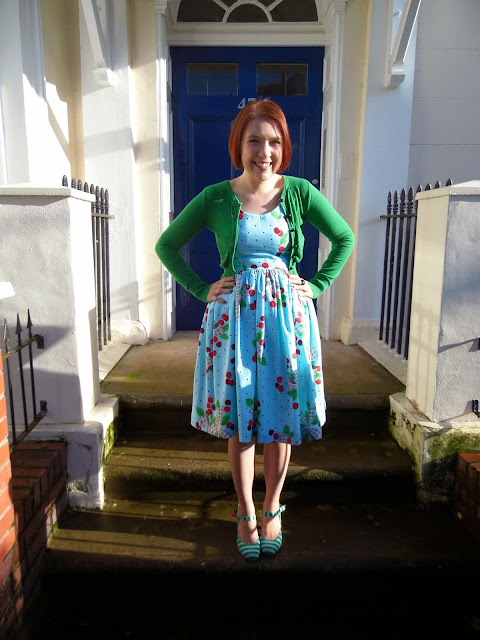 I accessorised this with green rather than red because - well, mainly I think because my red cardigan was in the wash.

Although I love the fabric and I like the idea of this dress, I don't love it overall. There's nothing really wrong with it and I am sure I will wear it - especially as I was so touched to receive the fabric - but I'm not sure that it's very flattering. There's something about it that feels a bit off that I can't quite put my finger on. I might feel differently after I have worn it again - maybe I will like it better if I wear it with red - but, in any case, I enjoyed sewing it and they can't all be winners all the time, right?

I did like the fact that I could wear it with these shoes, though: 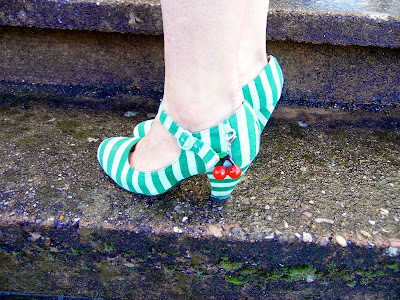 Yes, they have detachable cherries on them! I know, right?

Actually, maybe the issue with this dress isn't the dress itself. I enjoyed wearing it and felt pretty good in it. I think where I started to feel ambiguous about it is when I thought about writing this blog post. I'm getting a bit bored of blogging about sewing, to be honest. It's mostly because I like to sew and wear very similar things. I'm absolutely fine with that and, for the moment, I'm not looking to go for anything especially more challenging or complex. But I AM getting a bit tired of blogging everything. I've been blogging here for five years now and I don't think I'm ready to stop - but I do feel like I need to make a change of some kind. I'm just not sure what.

Apologies for the outpouring. Who knew a dress could prompt such navel-gazing, eh?! I think I just need to take some time to regroup and recharge and think about what, if anything, to do next.

I do have one idea, though: 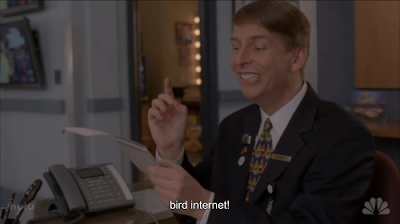