Aaaaah BRILLIANT! A load of people in a stable, Ted. It's the one thing I didn't expect.

Hello, and happy Christmas everyone! I hope you've all been having a fun and festive time. I have - it's so nice to finally have some time off work! I've been thoroughly enjoying having some downtime at home with Nic - it's been made even better by the amazing faux-sheepskin lined slipper socks my parents sent me as part of my Christmas present. It's been hard to want to leave the house because, much as I love my shoes, I kind of don't want to take these things off. It's going to be hard going back to work, but thankfully I don't have to worry about that for another week. Yay!

The run-up to the holiday itself was pretty eventful. I was working until the 17th and was in all-day meetings in London for the last few days of work. I had anticipated that these would be utterly horrendous - the ones the previous week had been - but thankfully, actually, they turned out to be grand. They were long and totally exhausting days so by the time I met Nic at the end of the working year I was basically a husk of my former self! Immediately after finishing work, we got on the train down to Folkestone to spend a few days with Nic's family. Rather than staying with Nic's parents, we opted to go for an airbnb rental as both of us had been having trouble with insomnia. This proved to be a good decision for a lot of reasons, not least of which being that the place we stayed was so lovely! I woke up on my first day of the holidays to fresh coffee in a little sitting room with a sea view: 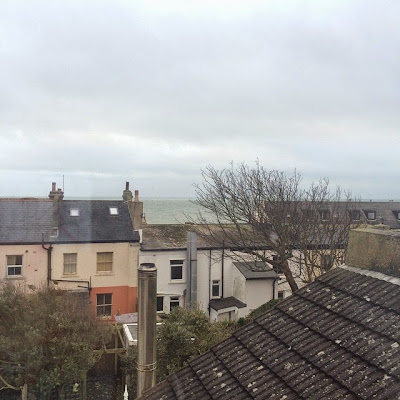 We had a great few days in Kent and it was a good way to start the holidays. Unfortunately, a combination of exhaustion and maybe a bit of overexcitement led to my downfall on the Friday night. After having afternoon tea with Nic's family, we had planned to meet our friends Mr and Mrs S for some drinks. I drank a bit too much too quickly - not all that much altogether, but clearly too much for my body to handle (I had four drinks in total and a sip of a fifth, which I then spilled) and I ended up giving myself alcohol poisoning. It was really horrible and although Nic had to call the paramedics, I thankfully didn't have to go to the hospital. I was tremendously embarrassed and ashamed as well as being thoroughly surprised, but the reaction I had to the drinks was not at all normal.

Anyway, it could have been worse. Despite being violently and copiously sick, I managed not to be sick on myself or on anyone around me, nor was I sick on Nic's lovely new vintage coat. The paramedic was amazing and not at all judgmental although of course I felt awful that he had to be called. I was conscious the whole time so I don't think my drink was spiked and although I felt horrible the next day (and indeed, I was still being sick the next morning) by the afternoon I was well enough for us to travel back up to Leamington as we had planned. I do like to have a drink but I hate being drunk, and I really hate that I got alcohol poisoning because, you know, I'm really too old for that kind of carrying on. Ah well, live and learn.

The rest of the holiday has been MUCH more chilled out. Nic and I spent the few days before Christmas seeing friends, doing some last bits of Christmas shopping and watching Christmas specials of our favourite TV programmes. On the Monday before Christmas we spent the day with Rick and Lauren, who cooked us an AMAZING Christmas feast, and I wore a Christmas dress! I had been dithering for a while over whether or not to sew a festive-themed dress, mainly because I didn't want to end up with a dress I could only wear a few days a year. But then my friend Hattie sent me a parcel containing some subtly festive fabric, so it had to be done! 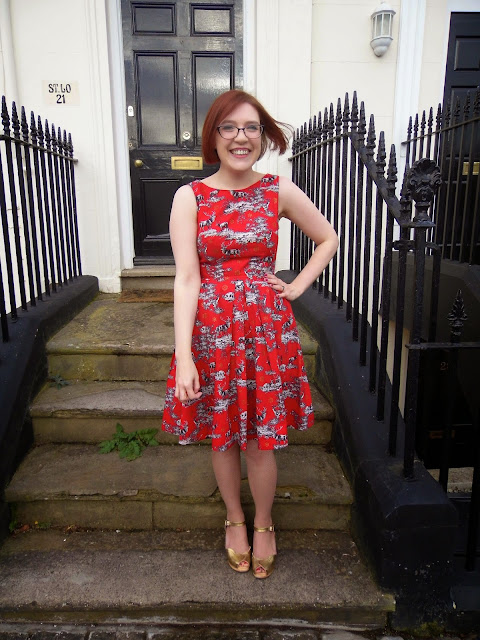 I'm still trying to get used to what I look like in photos with my glasses on - although I have finally been able to get used to the glasses themselves! Anyway - yes, the dress. It's festive and wintry without being too overtly Christmassy, so I think I will be able to wear it past the festive season. And it has reindeer on it! 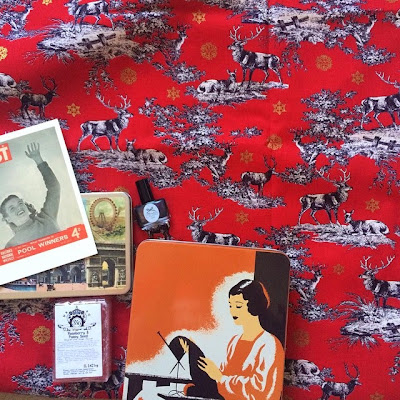 I totally forgot to get a close-up of the print, but here's a photo I took when the parcel Hattie sent arrived.

The fabric is a cotton poplin and it doesn't have any details on the selvedge, I'm afraid, but Hattie bought it for me in Leeds market and I have since seen it in Coventry Indoor Market as well - in fact, the lady there also has it in bottle green! It is really nice quality and it handled really well, softening up a little bit after pre-washing.

As the fabric was 60 inches wide I thought it would be a good chance to try out the full pleated skirt from Simplicity 1873, and it paired up perfectly with the bodice from the Emery dress. This was a perfectly simple sew - just what I wanted for a Christmas dress! 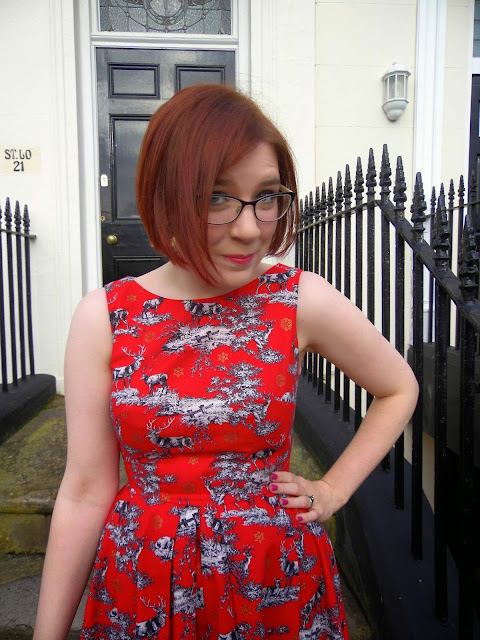 I look like a dick here. But I'm a dick who can see things. So I'll take it!

So there's not much to say about the making of this dress anyway. I wore it for a massive Christmas dinner with Rick and Lauren on Monday and then again on Christmas Eve for a massive Business Lunch with our friend Char in Kayal. EXCELLENT PERFORMANCE, DRESS. It performed better in that regard than the beautiful dress I made to wear on Christmas day which, for pattern placement reasons, is cut on the cross grain and is correspondingly lacking in ease of any kind. No room for a roast dinner in there. This one, though - nut roast and then a white chocolate cherry bombe thing and no issues. It's good to have the odd dress like that in the wardrobe.

I think it looks good with my sandals, too, which were the one thing I bought in the Black Friday sales: 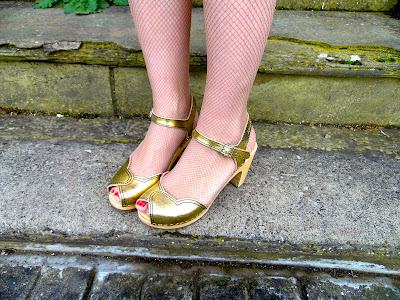 The other thing that is very special about this dress is the kindness with which it came to me. I've never met Hattie - she's a Twitter friend that I have come to know through Nic (who has met her) and it was extremely kind of her to send me this fabric. From what I know of her through our chats on Twitter, this seems to be totally characteristically kind and awesome of her. It's also characteristic of many of the wonderful people I have met through Twitter and through blogging over the years - a good number of whom have gone on to become good off-screen friends too. I've shared some wonderful times in 2014 with people I have met on the internet and through sewing and I continue to be humbled and grateful by how lucky I have been to do this. These people reached out to me in the most incredible way at the beginning of the year with Sew Dolly Clackett, organised by Sarah. I still don't really know what to say about that - I mean, I still can't believe it actually happened! It was intense and pretty overwhelming, but it was incredibly touching. It was a lot of fun looking through the flickr pool to choose the winners, as well!

I guess 2014 has been kind of a shitty year globally, but it's been a wonderful year personally. I feel like both Nic and I have hit our stride in lots of areas of our lives. It's been a great year for me work-wise because I've continued to be challenged and stretched by my job and I have really enjoyed that. I worked hard to be promoted in September and although the increased responsibility and - forgive the business speak - accountability is a big deal for me, I was ready for it and am grateful for it.

Of course I've been sewing lots and I think that this year I have made progress in learning about fitting. It's still a challenge - and I guess it always will be - but that's fine. I had a bit of a falter recently about sewing and blogging but a bit of a break from both was all that was needed for me to get my enthusiasm back! I'm very proud of lots of the things I made this year, but of course the thing I love the most is my wedding dress: 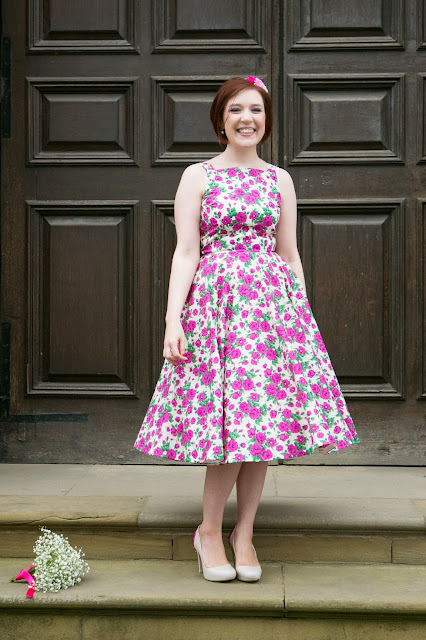 Because, you know. Not only did I make it for the best possible reason and for a very wonderful day, but it feels like me in so many ways. It wasn't a technically challenging dress to make, it didn't take months, it's not couture and it's not perfect. But oh my word, I loved making it and I loved wearing it.

Getting married was also something that made 2014 pretty great. 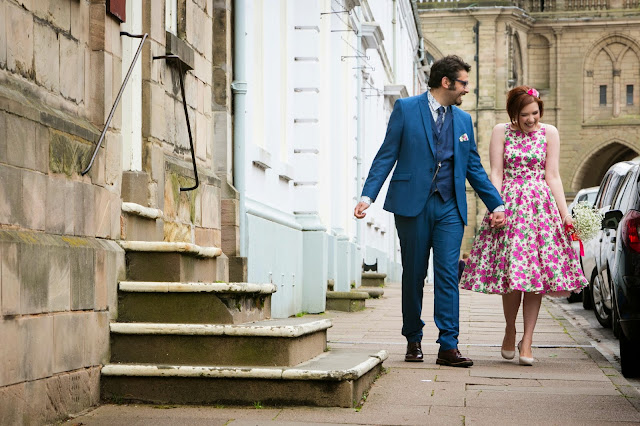 Our wedding photos were taken by our friend Fiona Murray. She's moving away from Leamington soon and I'm going to miss her! I love all of the photos she took of our wedding but I think this one is especially great. I can't remember what it was that Nic was saying that was making me laugh, but this is us. He makes me laugh all the time and we've had another good year together. You can't ask for much more than that.

Well, it's getting late and it's time for bed. I'm getting my taste for blogging back so I hope to be back again soon - possibly before we say goodbye to 2014, but possibly not - so I will say goodnight and see you later.

This will be me in 2015. Just you wait.
Posted by Roisin Muldoon