He was one of the good ones. Like Clint Eastwood in a beard, but fatter.

Hello hello! I hope everyone is grand. I'm not too bad: tired and eagerly anticipating finishing work for Christmas, which I do on Wednesday. Before that I have to get through two days of what will most likely be an absolutely hideous meeting, but then it's going to be PURE PARTY CENTRAL over here. By which I mean: a lot of sleeping and knitting, some drinking, some sewing, and then more sleeping. Hurrah for the holidays!

I have had a busy few weeks. This time of the year isn't party season for me, but it's a very busy time at work and of course it's just a busy time socially. I was in London last week for another (slightly different) Two Days of Basement Meeting Hell and was able to make the most of it by having drinks with colleagues and a lovely evening out in a fancy bit of London with Nic. My hotel was in South Kensington, so we had a wonderful meal in Rocca on Old Brompton Road. The food was delicious and the evening was surreal and fun - Nic and I were maybe the only people in the restaurant without a hereditary peerage - or at least that's what it felt like - so it was a bit like being in our very own episode of Made in Chelsea. Very pleasing indeed. I'm staying in the same hotel this week so I'm sure we'll get out for an equally fun meal and, best of all, I can have a cinnamon bun from Gail's for my breakfast. That might sound trivial, but it's thoughts like that which are helping me face what are going to be a very difficult couple of days.

So that is the craic there. I'm running on fumes at the moment so I will be very glad to get through the next few days and then I hope I can get back into the swing of sewing and blogging, you know? I have a few fun projects lined up for over the break, including a McCalls 6996 shirtdress in red Liberty Carline poplin - see Mary from Idle Fancy and, obviously, Heather B for my inspiration. I made a toile of the bodice a few weeks ago and I need to revisit it, but I'm saving myself for when I can sew this dress at my leisure. It's considerably more involved than my usual sewing and, while it's not my first shirt dress, I'm hoping to learn some new techniques. Mainly I'm looking forward to having the time and mental energy to do that, so roll on the holidays!

I also have plans for at least two more By Hand London Kim dresses, which are just so much fun to sew. And it's a Kim dress I have to show you guys today! You've already seen one - but it was my second one - the Scarlett dress. I was a one of the testers but had so few comments to make on the drafting that my test version is very close to the finished pattern - so I'm going to blog it. 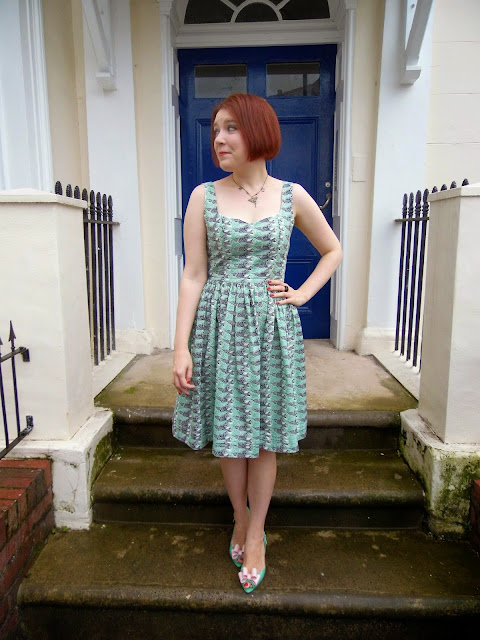 Yeah I went straight for the full-skirted version because OBVIOUSLY. I was paired up with Josie from Fabric Godmother, who provided the fabric. I chose this Japanese-inspired wave print from Birch Fabrics. It's a bit different for me in that the print was smaller, but there was something about it that I just kept coming back to when I was picking the fabric. The print is stunning: 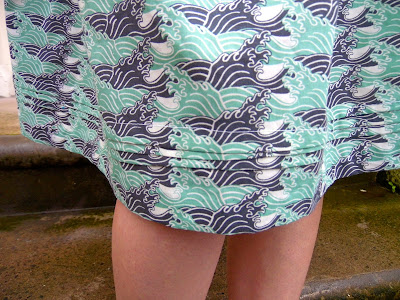 And there are my pin-tucks, which I admit are almost totally lost in the print. I knew they would be, too, but I wanted to sew the pattern as instructed so, pin tucks it was. I like them but they're fucking time-consuming on a skirt this wide, and a bit fiddly over that distance. I think I would only sew them again if they were going to be more obvious on the skirt.

Actually the pin tucks were the only bit of the pattern I had any trouble with. I (again) doubted my tape measure with this dress and cut this dress in a size 10. I didn't toile because I think princess seamed bodices are easy enough to fit on the fly, but I had to dismantle the bodice of this dress once I made it and sew it in the size 8. Job done, and I'm really happy with how this dress fits me. 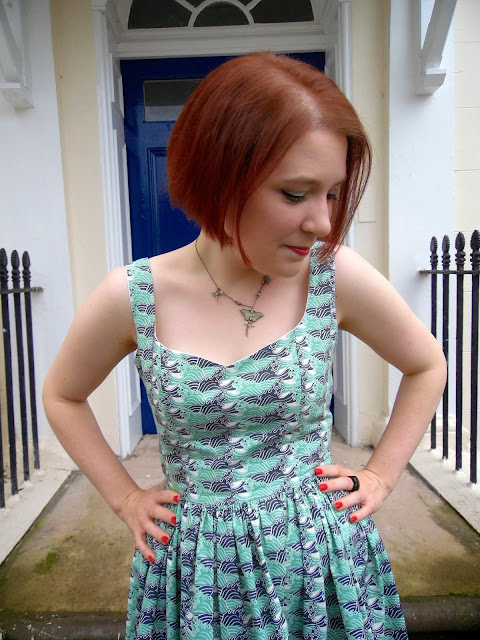 It's not perfect - as you can see, the neckline does stand away from my body slightly. That may be a little bit to do with the fabric choice - this is a pretty crisp medium-weight cotton - but it could very easily be solved with a bit of cotton tape in the neckline. There's a wee bit of excess fabric under the bust, which could be solved by adjusting the princess seams at that point. But you know, nothing major. Oh, and I like the back, too: That's not too bad, right?

I have made three and a bit Kim dresses since I got the pattern - I say three and a bit because I combined the Kim bodice with another skirt - so the pattern is already well in rotation. It's a fair bit lower-cut than I usually like - being so short, it's something I'm often a bit self-conscious about - but I must admit that I really like the shape of the neckline on me and it's hardly obscene, is it?! 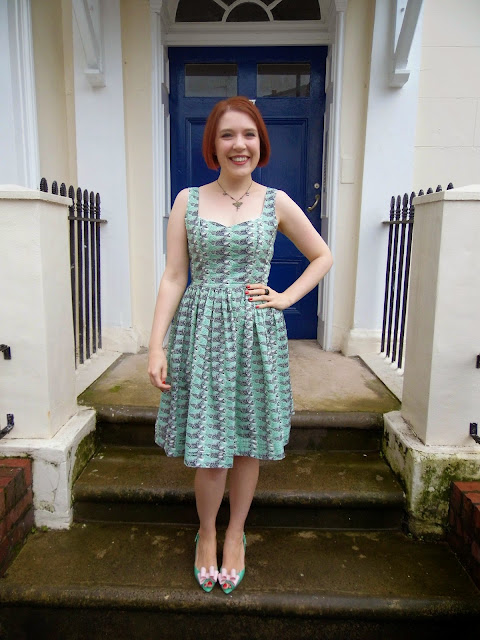 I have even worn this dress to work with a cardigan, and I added a scarf for when I was in meetings and wanted to look a bit more formal. My workplace has a pretty relaxed dress code though and to be honest, the print on this dress is so much less 'conversational' than a lot of my clothes that no-one passed any remarks on it. All good!

That's Kim. The next one I have planned is going to be a border print one, in this outstanding Michael Miller flamingo fabric I have just bought from the Village Haberdashery. I know. It's not even officially winter yet and I'm still/already sewing summer clothes. Not sorry.

Right. I'm going to motor now because I've got stuff to do. I'm going to leave you with a photo, though. I got new glasses on Friday. I'm short-sighted and have worn glasses since I was a teenager, but I only rarely wear them out of the house because I didn't like the glasses I had. I finally had an eye test a few weeks ago and picked up two new pairs of glasses on Friday. I've been making an effort to wear them all the time and getting used to them is weird. The prescription is stronger but also being able to see clearly over distances is not something I've been used to, so it's kind of been like being drunk. Or like Father Jack when he sobers up. I'm still not sure if I like how they look in photos, but I might start wearing them in photos anyway.

So TL;DR. I got new glasses and now I look like this: 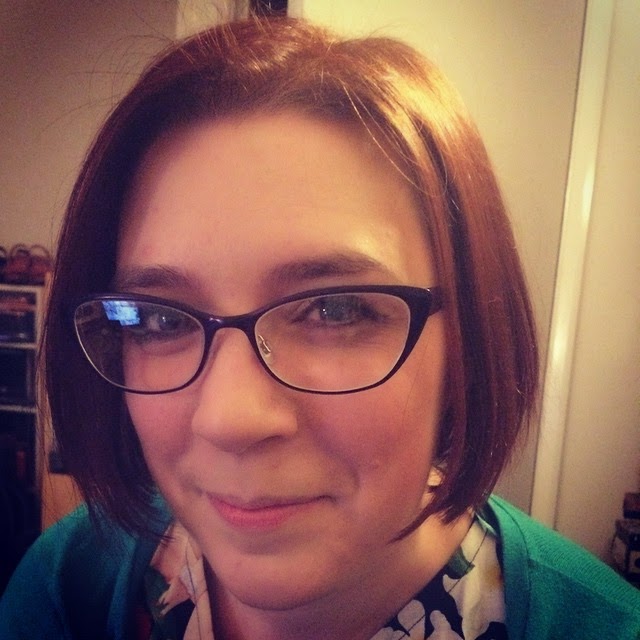 Right-o. See you all later. I need to figure out why I'm still on this feckin island.
Posted by Roisin Muldoon