Jealousy is a very ugly thing, Dorothy. And so are you in anything backless.

HEEEEEEEEEEEEEEYYY you guys! I'm back! Back and badder than ever! Or, you know, back at any rate, and feeling a good deal better than the last time I wrote.

Thank you to everyone who got in touch with words of reassurance! After crying at work last Monday things picked up somewhat, and then took a dramatic nosedive on Thursday. I was working in London, attending another all-day meeting in a basement meeting room of our biggest supplier. Anyway, without getting too much into it, I had to make a (small) change to my big project and it just tipped me over the edge. Crying at your own office is one thing, but crying uncontrollably in the lunchroom of someone else's work is actually the pits. It was so fucking embarrassing. Thankfully, my completely wonderful colleague R was there to sort my head out and I managed to dry my tears and wash my face so I could get on with the rest of the meeting, but it really was evidence that I am a little bit burned out.

It turned out to be fine, though. The change was easy to make and was signed off that afternoon. I got to Marylebone on time to go to Marks and Spencer before getting on my train, and this is a thing that exists in the world: 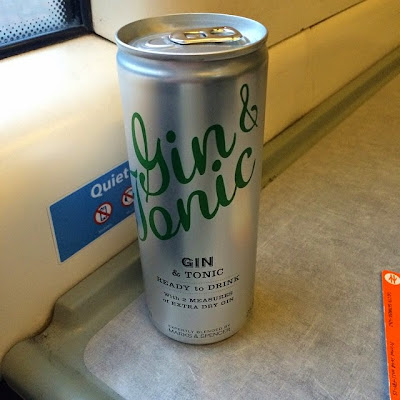 Look, I'm not advocating drinking your way through your problems. At least, not all of them. But this acted as an anaesthetic to the embarrassment of having cried at work twice in one week. And, just so you know, it wasn't too bad. A bit bitter, even for a gin and tonic, but it really did the job.

I had the day off on Friday and spent it having fun with Nic and our friends Rick and Lauren, which was very much what I needed. It took until Sunday for me to stop worrying about work, though, so I'm still not completely back on form. Things are looking up, though - the Deputy Director gave my big project the final sign-off on Tuesday, so I can stop worrying about that until at least May, when it goes live. The mornings are brighter, the evenings are longer and I can start to look forward to work not being quite so hectic. And I even managed to get some sewing done at the weekend as well as finishing my Agatha cardigan. GO ME!

I did a bit of pattern testing for By Hand London a couple of weeks ago and, as of today, you can pre-order the pattern. The Sophia dress is going to drop (lol) in the middle of March, but as you can order it now I can share the test version I made. I wasn't asked to blog about this or to link to the pre-sale or anything, but I'm pretty happy with how the dress turned out. I had only very minor comments to make on the test version as well, so this should be very close to the finished pattern. 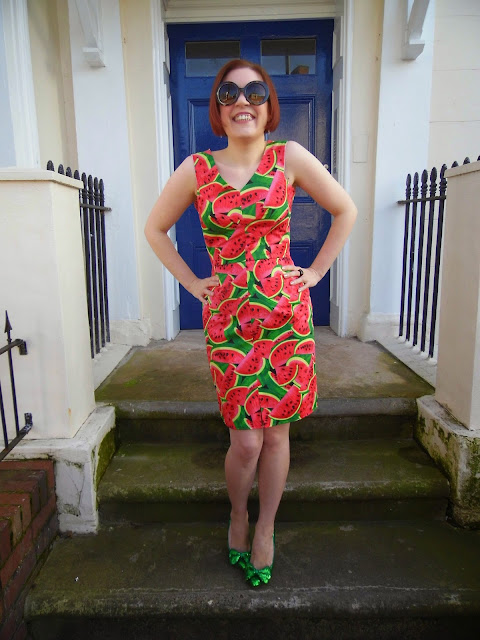 Here's me pretending it's not February. DISCLOSURE: It's February.

So, there are two variations available in the Sophia pattern. One has a collar and a full skirt with godets, and the other has a straight skirt with a split in the centre front. The full-skirted version is the more obvious Roisin choice but I had this watermelon fabric in my stash and it immediately came to mind as being a good pairing for the straight skirt. In fairness, it's probably not the best choice to showcase what is unusual about the pattern - the angled darts on the bodice and skirt - because the print is so busy. In fairness, though, that is going to be true of almost any fabric I choose because I am all about the fun print. 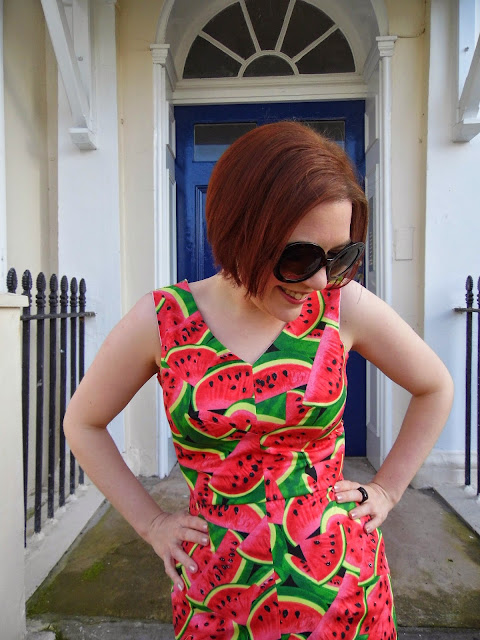 This dress was super straightforward to sew. I did a toile of the bodice using some pink cotton that I had in my stash. This was to check that I had chosen the right size - depending on style I vary between an 8 and a 10 in By Hand London - and to check that the unusual darts were going to be in roughly the right case. As you can probably see from the slight wrinkling under the bust, the fit isn't totally perfect but it's not too bad out of the packet. I took the shoulder seams up a bit but have since realised that I need to do a sway-back adjustment to this pattern as the bodice is still slightly too long in the back. 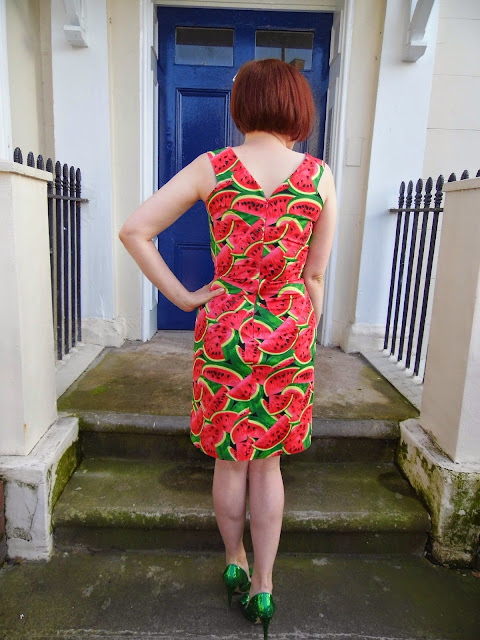 Here's an awkward-as-fuck photo of my back! You can't really see the wrinkling at my lower back because of the goofy way I'm standing but it is there when I am standing straight!

This dress is really not an everyday dress for me but I kind of surprised myself with how much I like it. It's not totally me and I think that the watermelon print gives it a real 90s feel, as does the very straight skirt. But those are also the things I like about it and it's good to try new things once in a while. It's a fun party dress though, and what woman doesn't need one of those?! (Yeah I know, loads of women. But it doesn't hurt to have one, is my point.)

And we need to take a moment to talk about what might be the best shoes ever... 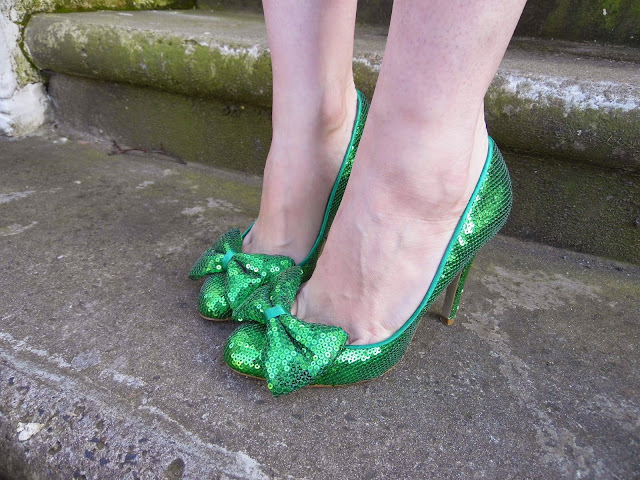 These Kurt Geiger shoes are from 2009 and were my first choice for wedding shoes. I saw a pair for sale in a random second-hand shoe shop in Warwick about six months before our wedding, but they weren't in my size. I thought the bright green would look gorgeous with the pink of the Carline print. I immediately started searching for them on ebay and a pair finally came up in my size about a month ago. I got them for £16! They were in basically perfect condition apart from the fact that they were muddy. The seller had kept the original box and tissue paper and everything, but couldn't be bothered cleaning the mud off them before posting them. WTF. But they were worth cleaning because although they are ridiculous, they are ridiculous. I need more sequinned shoes in my life. 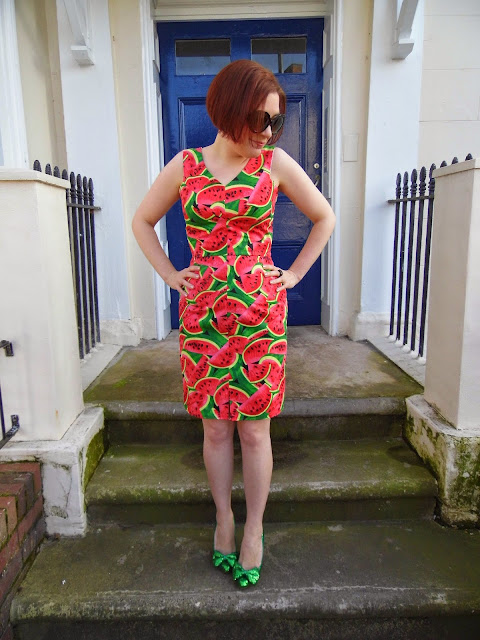 I have plans for a second Sophia dress soon - I want to give the full-skirted variation a try and I have some beautiful fabric lined up for it - this red telephone print that was a gift from Amy: 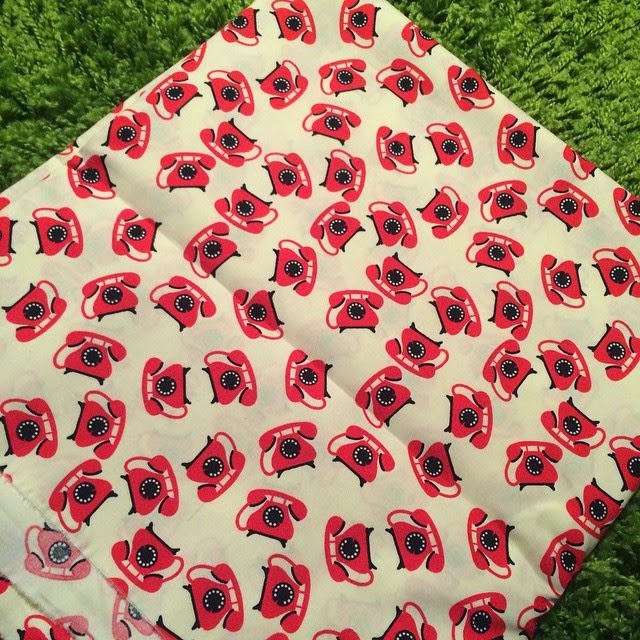 I have some red lawn for the godets and the contrast collar. I think it has the potential to be kind of awesome: I just need to make some time to sew it!

I also need some time to go out dancing. Possibly in some sort of head-dress. I do regret not getting married in a hat, veil or head-dress of some kind. 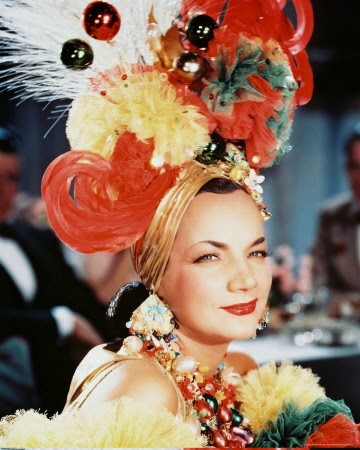 Fucks given: None. Literally none.

Right now, I had to get up at 5:30 this morning to go to London for a meeting so I'm going to go to bed now. I'm tired and I need to build up my strength. Plastic fruit is heavy, you know. I will be back soon though with pictures of my finished cardigan. Until then, take it easy. Goodnight!
Posted by Roisin Muldoon