Hello! What's happening, folks? It's Sunday and I'm sitting on the sofa, under my favourite blanket with my head wrapped in clingfilm. Applying henna to my rapidly greying hair is one of those things that I always put off until it can be put off no longer, not least because for the first day or two after I've done it, it's so orange that I look like (you can choose your favourite here) Chuckie from Rugrats, Pennywise the clown from IT, Ronald McDonald or Rainbow Brite. 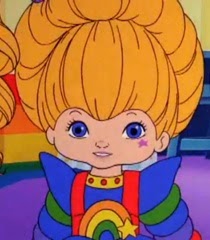 Actually, Rainbow Brite had a pretty strong look. I quite like it.

It's been a tough old week. No tears this time, but I've found the endless grey skies and cold winds to be really hard. It was sunny on Wednesday but I spent the day in another meeting in a basement, then on the tube, a train and a rail replacement bus that smelled almost comically bad. By the time I got back to Leamington any good mood the sunshine had given me had disappeared and I went straight home and put my pyjamas on. In fairness, I did have a better week this week than last week but OH MAN am I ever ready for the spring.

That whine aside, I am feeling better. A few irritating things happened this week and, rather than dissolving into a pool of tears, I channeled my inner Rizzo. Sometimes, that's the best thing a girl can do.

So anyway, that's what's happening there.

As I said in my last post, I have a finished knitted project to show you today - an Andi Satterlund Agatha cardigan. I'm so happy to have finished this cardigan because it has taken me months to complete and everything about it was a challenge. I don't mean that in a bad way at all - knitting Agatha really stretched me and, while the finished article is far (very far) from what I would like it to be, I'm still tickled to death to have got this far with it.

I first attempted to knit an Agatha cardigan about a year ago but was totally foxed by the instructions. I gave the pattern to my friend Char to look at, and she knitted one up as a sample so she could talk me through the instructions. She's pretty awesome like that (and in other ways too, actually) At around the same time, through a combination of blog comments and a couple of emails from knitters, I realised that I had been wrapping my purl stitches wrong. Well, not wrong, but wrapping them in such a way that I was getting a twisted stockinette stitch. That is totally a thing, but as it was unintentional, it was good to get the heads up on where I was going wrong. Char showed me a better way to wrap my purl stitches, talked me through how to read the charting on the pattern and lent me her umbrella swift so that I could wind my skeins of Cascade 220 yarn into balls that I could use. See, I told you she was awesome.

I got going on the cardigan in October but only made serious headway on it at Christmas, when I was suffering very badly with insomnia. Most of the body of this cardigan was knitted on the nights when I didn't sleep at all and instead stayed up knitting and watching Mad Men. Then, I took a break from it when I ran into difficulty with the sleeves - which again, I was helped with by you excellent readers  - and I finished it last week. Here it is! 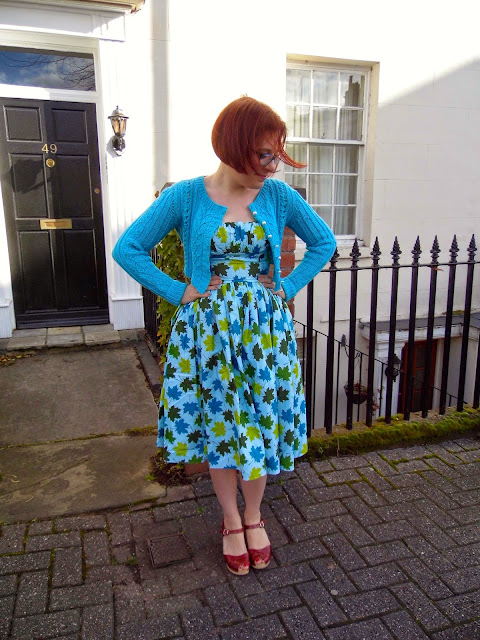 YAAAAAAAAY! As I said above, this is nowhere near perfect, but I am super proud of it all the same. The yarn is Cascade 220 and the colour is Aqua - actually the very bright peacock blue of it is sort of hard to capture in a photograph. It's so bright and jolly. The Cascade yarn was really lovely to work with. It didn't split at all or go all fluffy - I had been knitting with a Rowan yarn last year that I eventually had to put in the bin because my throat filled with fluff every time I got it out of the knitting bag. I'm already trying to decide which colour to go for next because I'd like to knit another Agatha at some point, to put into practice all the things I learned (and hopefully some of things I will learn when you guys tell me!) I'm thinking maybe Goldenrod will be the next colour... 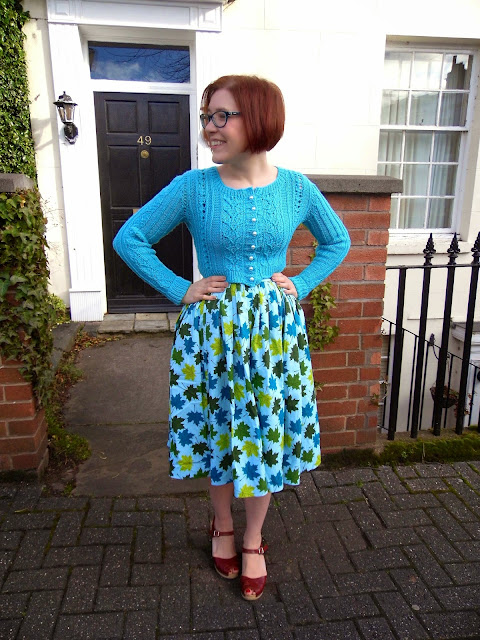 Here it is buttoned up! And here are my criticisms of it. I'm still trying to get to grips with knitting button bands neatly - the bottom of the button bands just haven't lined up with the ribbing at the waist at all, so that's an area that I need to take a bit more time over on my next cardigan. It's not a massive problem, but it does make the cardigan look more home-made than I would like. I think that stabilising the button bands with petersham ribbon will help with this - Lauren Lladybird has a great tutorial on this that I'll have to use the next time I knit. 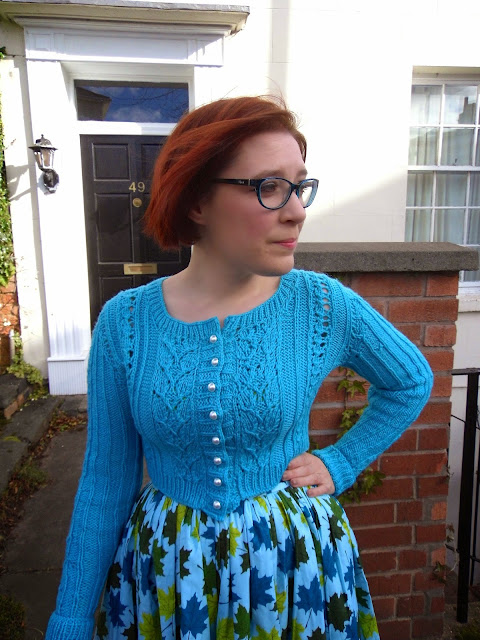 You can see what I mean a bit more clearly in this photo. It's not a massive problem because the cardigan is still very cute and totally wearable, but I think it would look a LOT better if that weren't the case. I had been feeling a bit bad about the fact that you can see both bands when the cardigan is buttoned up, but actually that's the case in Andi's Agatha as well, so I feel a bit less bad about it now.

The other thing that I'd like to be better at is blocking. I did block this cardigan and it helped even out my stitches - not completely, but that's fine because my stitches will get more even as I get more practiced at knitting - and it also helped me with shaping the cardigan. BUT, I know that my blocking techniques could be better. For instance, I think I stretched this out a bit too much at the waist, and not enough in the back body. It could just be the case that I need more experience in doing this but, my readers who are knitters, do you have any favoured methods of blocking? I wet-blocked this, but would steam-blocking work better, do you think?

I'm also not totally certain that I knitted the correct size! I knitted a size medium. Now, I have lost weight since I started knitting this cardigan (stress and insomnia will do that to a girl) and, as I said above, I think I was a bit too vigorous in stretching the waistband when I blocked it. It is supposed to have negative ease - should I knit a bit smaller than my measurements and then get closer to those in blocking? Fit is very personal, but when it comes to knitwear I like it very fitted.

STILL THOUGH. I finished this cardigan! It was complicated and it took me ages, but I finished it! The lace pattern on the back is lovely but I'm not going to post a picture of it, because the photo is so, so goofy. To give you an idea of how much, it is about seven times goofier than THIS picture: 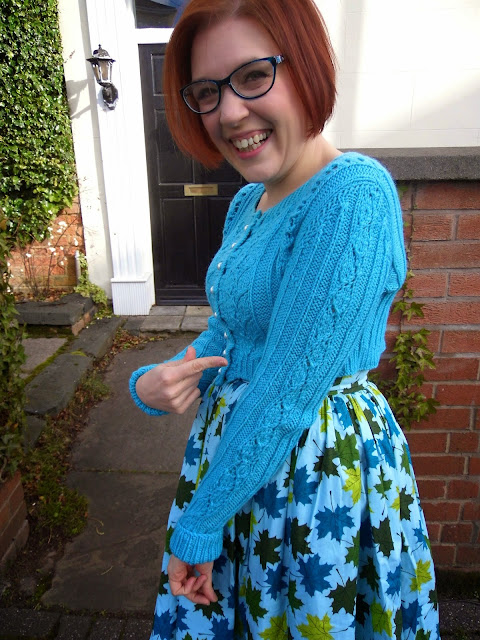 Ha ha, WORST PHOTO EVER. But look at how happy I am with my sleeves! I knitted the sleeves a size smaller than the rest of the body and I could have possibly even gone a bit smaller with them. As I said, I like my knitwear to be fitted. You can also see in this photo that I needed to stretch the back body a bit more in the blocking, as it rides up a bit. This is something I might yet go back and do - especially if you all give me your best blocking tips! 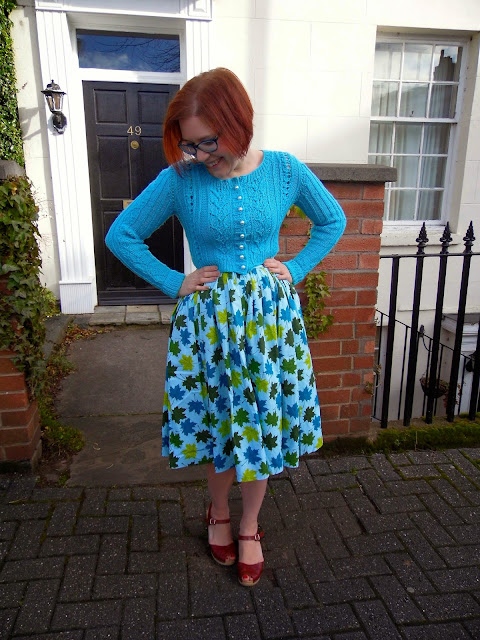 Persevering with knitting this cardigan has made me feel good about myself when other things in life have made me doubt myself. There's something a bit magical about knitting in that respect. Also, I think I find it easier to go easy on myself with knitting than I am when it comes to sewing. It's because I am still learning, but of course when it comes to sewing, I am still learning as well. Knitting this cardigan has been good for my mental health, so even though there are things about it that could be better, I am really happy with it. The only one of my hand-knitted cardigans that currently sees much wear is my nautical Miette - partly because I still really hate the feel of the cotton yarn that I made the pink Miette from, and the others just look a bit crap. I'm hoping that the happiness I feel at having finished this cardigan will mean I am more inclined to wear it. I think I will be.

Right-o, I must finish up and crack on with the rest of my day. At some point I'm going to have to let this bright orange hair out of its clingfilm prison so that I can go to Poundland and buy a multipack of pickled onion monster munch. I'm going to keep hold of my inner Rizzo this week, so that any shit can be dealt with in a constructive way:

My twitter friend Lucy and I came up with an outstanding idea for a TV show last week. The basic premise is that it is Stockard Channing and Kim Cattrall just swanning around being sassy as fuck and taking down the patriarchy while drinking and cracking wise in beehive hairdos. It would be like Absolutely Fabulous, only they'd both get to be Patsy. Tell me you wouldn't watch the shit clean out of that show. It needs to happen. Special guest stars Allison Janney and Hayden Pannettiere. Working title is Sassy-ass Bitches.
Posted by Roisin Muldoon