When you think about it, thinking about thinking is the hardest sort of thinking there is, which makes you think.

Hello hello! Happy weekend, everyone, and happy end of February! I am so ridiculously pleased to have reached the end of what is always a very difficult month for me that I celebrated last night with gin and I am going to celebrate tonight with champagne. That sounds more wild and exciting than it will be - one of the reasons that February has been so difficult is that I have been ill for quite a lot of it - so I'll probably be having a glass of champagne in my pyjamas before going to bed at 9 o'clock! Oh well!

I am honestly glad to get to the end of this shitty little month. It's probably the busiest and most stressful month in my job. Still though, I got my 2015 Big Project signed off, came to the end of a long series of meetings (no more basement meetings for a few months now.) Getting to the end of this period means that, while work probably won't be significantly less busy, it should be less stressful. I have a bit of leave coming up at the end of this week and I hope the rest and the time away from work will help me see off this virus that has been sapping my energy for the last few weeks.

That's mainly the craic with me. I'm a bit tired of not being myself, to be honest, but I'm getting there. In the meantime I'm trying to do lots of restful things like watching trashy TV and knitting, as well as a bit of sewing when I feel like it. I made another McCall's 6696 shirt-dress a few weeks ago and, last Saturday, took my chance in some early spring sunshine to get some pictures of it: 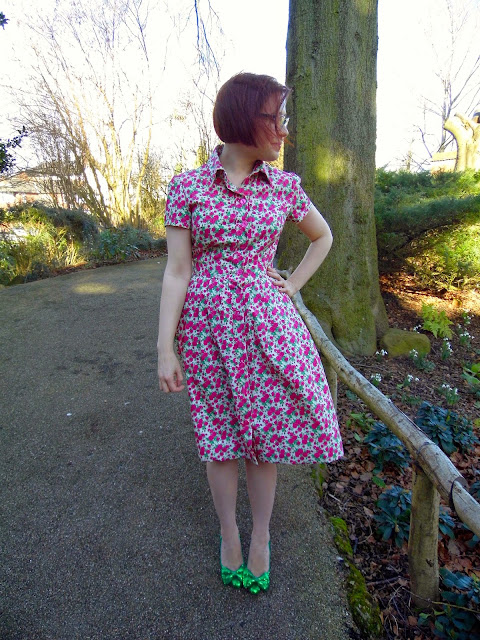 Another Carline shirt-dress! Well, when you find a formula that works there's no shame in sticking with it. That's what I tell myself, anyway. This Carline print is the same colourway as my wedding dress, but the roses themselves are in a smaller scale. I bought it from Kat's Fabrics on ebay, because obviously. She is awesome. I wasn't actually that sure of this print when it arrived - one of the things I like so much about the Carline print is the scale - but it looks so much better as a garment than it did as a piece of fabric. Well, I think so anyway.

I'm still working on the fit of this dress. After I made the Montague Terrace dress at the end of last year, I made another version of this in which I shortened the bodice. It wasn't quite the right adjustment to make and, while there's nothing really wrong with the finished dress, there's something about it that I don't like so it's kind of a wadder. It's been too cold to wear it, so maybe I will re-evaluate it when the weather is warmer. I don't know. Anyway, what I needed to do to this pattern was a sway-back adjustment, so that's what I did this time round. The bodice still needs some work - in addition to the sway-back adjustment I need to take some width out of the back. I possibly also need to curve the waist darts slightly but I won't really know by how much until I take the width out of the back. But hey, it's all fun and I'm nitpicking. I'm very happy with how this dress fits! 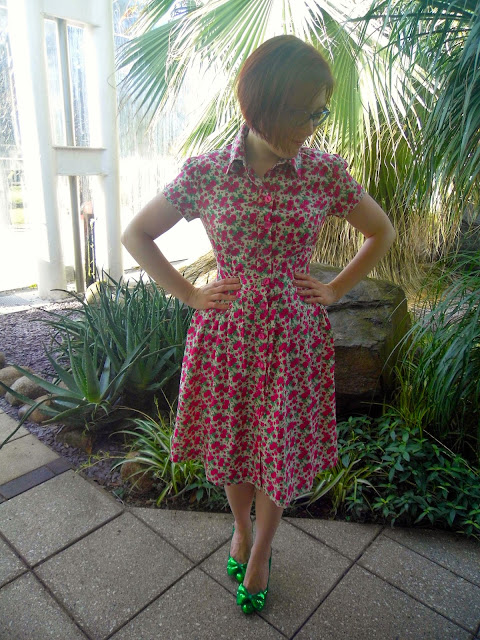 It was a chilly and windy day last Saturday when we took these photos, so I suggested taking them in the arboretum. Sadly this wasn't practical. For one thing, it was full to bursting with sloaney Leamington families so it was hard to find a quiet corner (I mean, fair enough, it's a public place. I'm not genuinely hating on families for enjoying the park, like) but also it was so warm and damp that the camera lens kept misting up!

I have to admit, I was at the end of my tether last weekend with feeling exhausted and over-committed, so I was in a super shitty mood when we were taking these photos. Poor old Nic is such a patient man, and he took very lovely photos even though I was basically non-stop bitching and moaning. I really did find a good one there, so I decided to thank him by taking him to The Larder in the Park for coffee and cake. It turned out to be a lovely place for a few photos also. 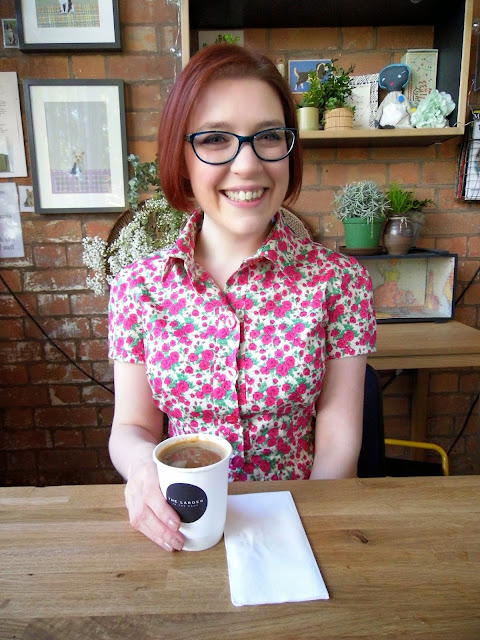 The coffee also helped to stop my whining, so there's that as well.

You can see that there's a bit of wrinkling across the top of my chest and also under the bust. I wonder to what extent this will be affected by taking width out of the back. It's hard to tell, and this dress is kind of hard to toile without making the whole thing. Anyway, I'm going to treat it as iterative, and see what happens the next time I make this pattern. Because there will definitely be more of these - I love wearing this shape of dress and I have thoroughly enjoyed sewing with this particular pattern. 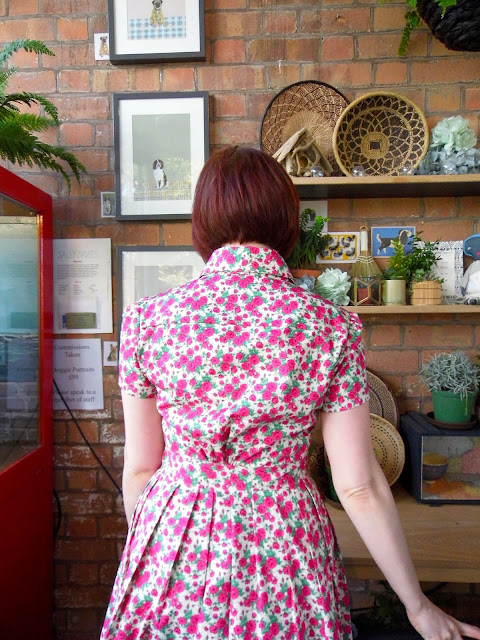 Here's the back view. So I think that I need to take probably about half an inch or maybe even an inch of width out of the centre back. I'm not sure if I need to do the same with the yoke, because it looks and feels fine - it's really in the lower back that there is a lot of excess.

Mind you, I still think the dress looks good and it's comfortable to wear, so I'm not about to lose any sleep over it. As we got up to leave our table, a woman who was waiting for it complimented the dress and told me how much the colour suited me, so I'm calling it a win.

Here's one more photo - it doesn't add to much to everything I've already said, but fuck it. Poor Nic laboured hard with an unwilling model to get these photos: it seems a shame not to use them! 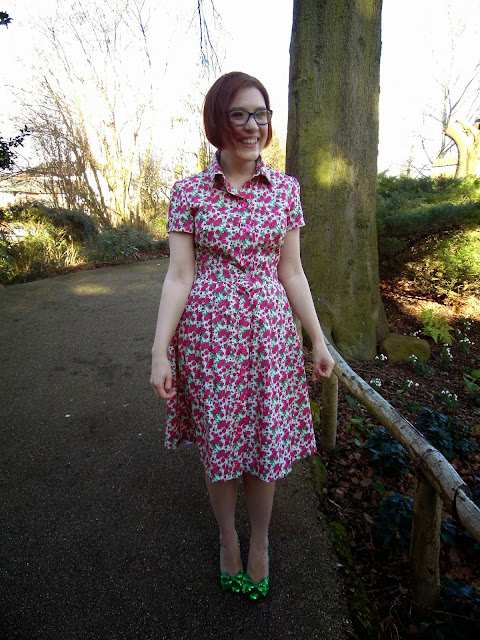 This is me, pure RAGING at the cold wind blowing my hair in my face and at being surrounded by other people, trying to smile naturally. Those hands are almost fists!

So anyway, that is the craic with this dress. Despite my awful mood the day these photos were taken (at one point I swore blind that I was going to go straight home and put this dress in the bin) I am really happy with how it has turned out. And yeah, I know that it's getting to be a bit All Liberty All The Time up in here, but seriously, the poplin is just the tightest shit. I love it. Earlier in the week when I wanted to do a bit of easy sewing, I busted out the pink Carline poplin I bought last month on Goldhawk Road and made myself an Anna dress with a circle skirt. I really take this whole concept of a signature look and run with it, eh?!

And I guess that's it. My head is fuzzy and my eyes are tired so I'm away to lie down. I need to build up enough strength to lift that glass of champagne, you know!
Posted by Roisin Muldoon