Hello hello! What's the haps, boys and girls? I am having a very restful and fun weekend after an unexpectedly stressful and annoying week. Work has been busy and a little bit irritating - well, it could have been worse on both scores, but my patience was limited this week - and, on Tuesday, Nic spilled beer on our lovely Macbook Air and...well, if that's ever happened to you, you'll know that beer and expensive electronic equipment do not mix. It's been sent to be looked at, and it's probably going to be reasonably expensive to fix. We bought a chromebook thing so that Nic can continue to work until the Mac is fixed or replaced, and it's fine. Actually, it's kind of a hilarious knock-off of a Mac except that it's turquoise, but it's doing the job for now.

So, it hasn't been a red letter week, all things considered. But it took an upswing towards the end of the week - we had dinner in the pub with friends on Thursday night and I was working from home on Friday and the sun came out! I had quite a lot to do, but it was much easier to get it done with sun streaming in through the (open) windows. Nic and I went out for a walk at lunchtime, had lunch in The Larder in The Park and got some photos of a dress I recently made. I haven't been sewing much at all recently. Work has really taken its toll on me in the last few months and it's left me with very little mental (or physical) energy for much else. I do have some projects backed up to blog about, and I haven't completely stopped sewing or anything - it just sort of feels that way because my output is so much lower than it was this time last year!

Anyway, I had a few days off a few weeks ago (just before we went to Bristol) and on the Friday morning, I got some beautiful fabric in the post: 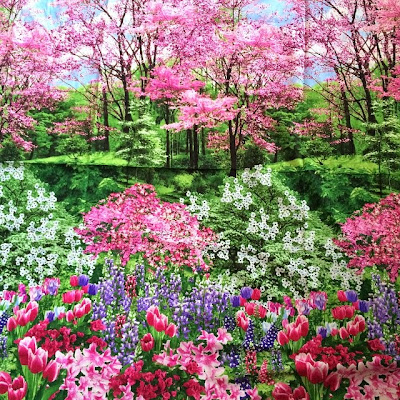 Awww yeah, am I right?! I put it straight in the washing machine so I could wash and dry it and sew it in one day. That's how excited I was to sew it, and I wanted to be able to wear it in Bristol that weekend. I've been after a fabric like this basically ever since I've been able to sew, so I could make a dress inspired by this lovely cherry blossom Bernie Dexter dress. To show off the pretty print, I wanted to keep it simple, so I reached for the Emery dress by Christine Haynes. As far as I'm concerned, it's the perfect canvas for a pretty print. Also, I can knock one up pretty quickly because I know it fits me and I have worked out my own construction order. By bedtime Friday night, I had a whole outfit planned out... 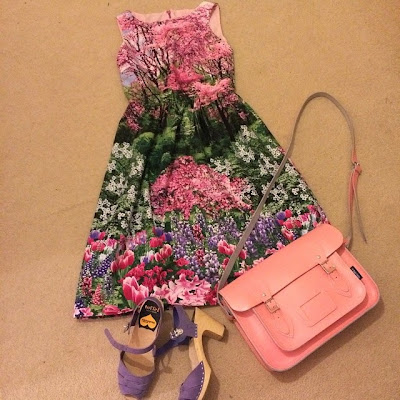 I didn't recreate this outfit exactly when I was in Bristol - those purple clogs need a bit more breaking in - but I did yesterday, when it was finally officially spring! 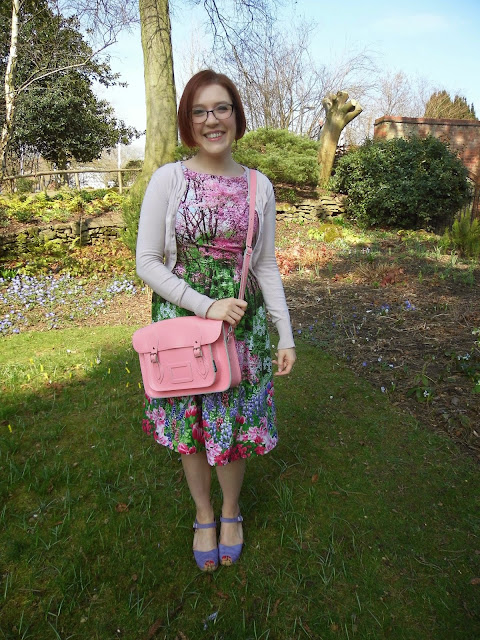 So, one of the challenges of working with a border print fabric for a garment is that either you cut the bodice on the straight grain, but with the print running the wrong way, or you cut it on the cross grain and have the print running the right way. Yeah, that sounds like a no-brainer, but with a quilting cotton it can be a bit of a risk. It wasn't too bad in this case, although I can really feel the stretch in the skirt! I cut my usual size in the bodice but I gave myself a tiny bit more ease by leaving a bit more room at the side seams. You can probably see a bit of wrinkling under the bust and, although the bodice isn't tight, I am much more aware of the waist seam than I am in other dresses! 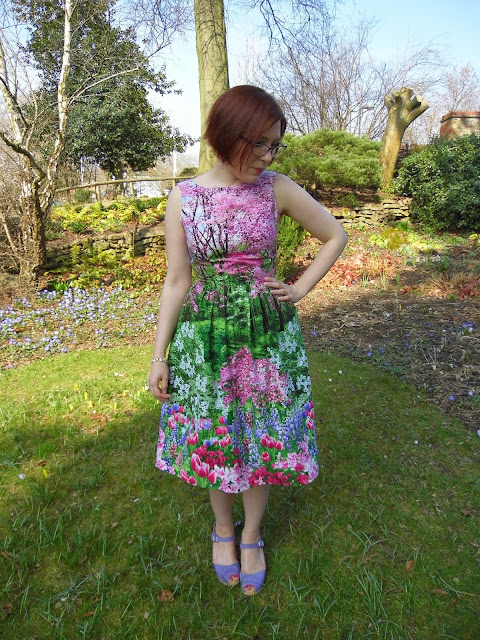 Totally worth it though, because I really love this dress. I bought two metres of the fabric (I bought it from Modes4U, if you want to get some yourself) and, as a result, the skirt isn't as full as most of my other Emery dresses. I think it's more than full enough, however! I didn't try to pattern match the side seams but all you constables in the pattern matching police can sit the fuck down, because I *did* make an effort to pattern match across the back... 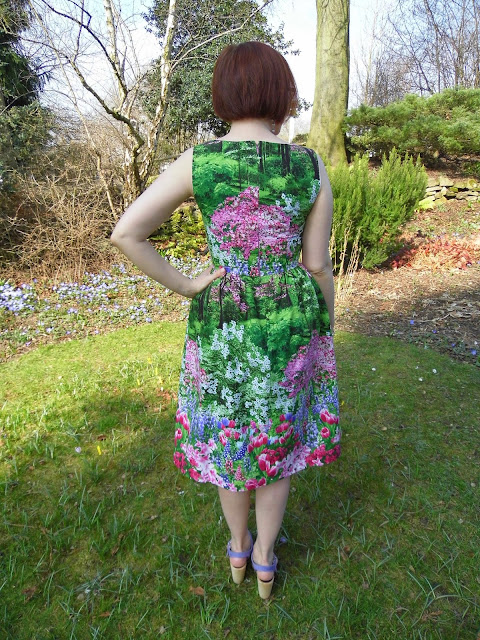 Yes, I wouldn't win the sewing bee. But as I have no interest in going on the sewing bee, I can deal. The cherry blossoms on the back bodice don't look matched, but they are matched as close as they can be.

And here it is from the front... 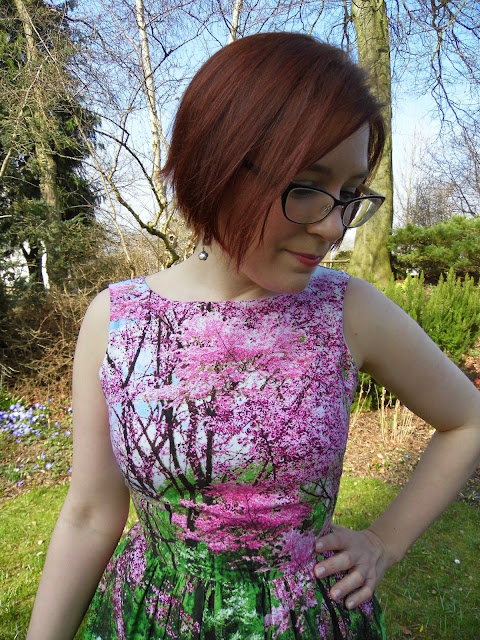 So that is the craic with the dress. I really do love it and I'm glad that it's finally spring, and not too cold to wear it. I was also very happy to pair it with my purple hasbeens, which I bought in the depths of winter. Well, not depths, as this past winter has been extremely mild. But anyway, I bought them on one of those days when I was feeling cold and hadn't quite pieced it together that buying summer shoes doesn't actually make summer come any more quickly. 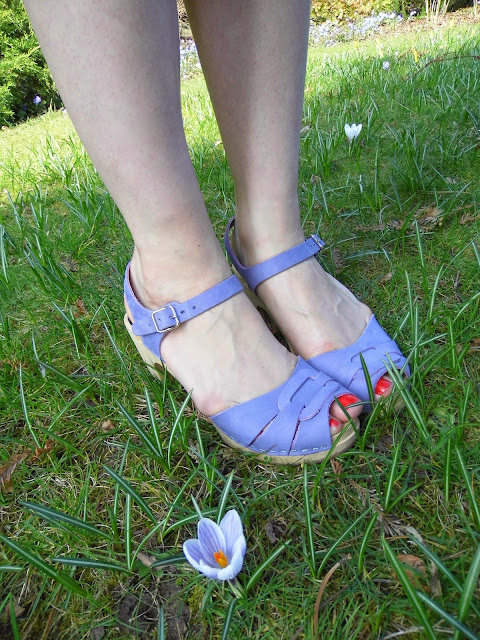 It also means I can legitimately use this gif to describe what I did on Friday:

I did a whole bunch of other things on Friday, including eating cake for breakfast; writing a lot of very long emails about work stuff; scoring application forms; evicting the actual swarm of ladybirds that were covering the sash window in the bedroom, cleaning the window and then putting vapo-rub on it, because apparently ladybirds don't like the smell of menthol; going to the pub to drink wine and then eating chips and watching NYPD Blue.

Anyway, on the agenda tonight is making pizza and introducing Nic to the only one of my top 5 favourite films* that he hasn't seen: 10 Rillington Place (1971) I think pizza and wine will be helpful to get through what is a beautifully grimy and depressing film. I'm not going to lie, I'm looking forward to it. Richard Attenborough, though!

So, I'm off to make pizza. But yes, the dress is named after the film of the Kevin Grisham classic. Did you know that before he was a novelist, Kevin worked at a recycling centre?

*The Silence of The Lambs, Jaws, Clueless, Short Circuit 2 and 10 Rillington Place
Posted by Roisin Muldoon