YOOOOOOOOO! Hello everyone! What's up?! It's been another busy few weeks here at Clackett Towers. I was wrong when I said work was getting less busy, it turns out, but at least the daylight hours are longer, you know? Also, and I had a few days off and then Nic and I had a few days away last weekend and it was very refreshing. So, hurrah!

I did a little bit of sewing on one of my days off, but I mainly spent that time knitting and watching Law & Order. Knitting is so much less physically demanding than sewing, and a day of just lounging on the sofa was just what I needed. I've been really getting into knitting since finishing my blue Agatha cardigan, and since then I have finished one cardigan and am almost finished another one. Whoop! Sewing will re-commence when I have a bit more energy - I have some purple Liberty Carline poplin calling my name - but my focus has definitely shifted somewhat. For now, anyway.

So that's the craic with me. Nic and I had a lovely few days in Bristol. We were there for the Bristol Jazz and Blues Festival. I had bought Nic tickets to see Doctor John, who was closing the festival on the Sunday night but, as we were going to be there on the Saturday night as well I decided to get us tickets to see Clarke Peters, who was also performing. The whole festival had a New Orleans theme and, as Nic and I are big fans of both The Wire and Treme, it seemed like it was too good to miss. His gig was AMAZING and possibly one of the best gigs I've ever been to. We had seats in the second row, so this was our view: 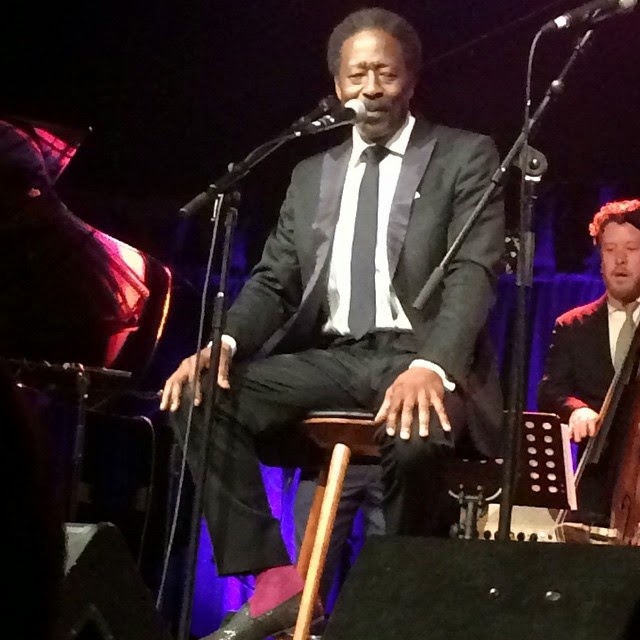 Nice burgundy socks there, boss. Sadly this photo doesn't capture the fact that this dude was wearing SPARKLY LOAFERS.

The gig was eccentric and funny - he opened with Way Down In The Hole and, towards the end, sang Treme Song. This delighted me because, as you might know, I'm all about the TV theme tunes. He also did an adorable duet with his son Max and one with Lillian Boutté, who we got to meet after the show. It was kind of mind-blowing to be in the same room as Lester Freamon, to be totally honest, but the gig would have been good even if he hadn't played such a well-loved TV character. STILL THOUGH.

Neither of us had ever been to Bristol before, and it's such a fun city. The whole experienced was helped by the fact that the sun was shining and it was actually warm when we arrived at lunchtime on Saturday. I'm talking about coats-off warm. We were staying in the oldest part of the city, which was convenient for the festival and a great location for exploring. The pedometer on my phone told me that we walked 13 miles on Saturday, which was easy to do in the sunshine in a beautiful city. I was doing it in new shoes, too! I also took my newly finished cardigan out for a spin: 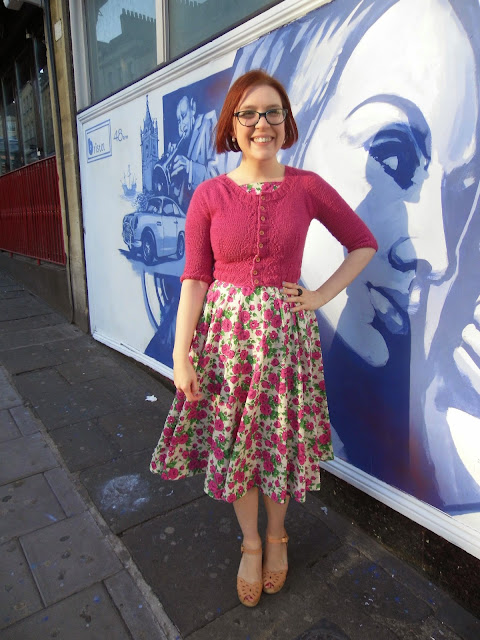 I know, another Miette cardigan! After finishing the Agatha cardigan and the revelation that I had been wrapping my purl stitches in the wrong way, I thought it would be good to practise my stockinette stitches with a cardigan that is mainly knit in stockinette. The yarn is Sublime Yarns aran, and it's just what happened to be available in a colour I liked in Hobbycraft. This cardigan took me around two weeks to knit, and I knit most of it on various trains and rail replacement buses! I seem to have mastered the art of not allowing my knitting to slide off my knee and underneath the seat behind me. 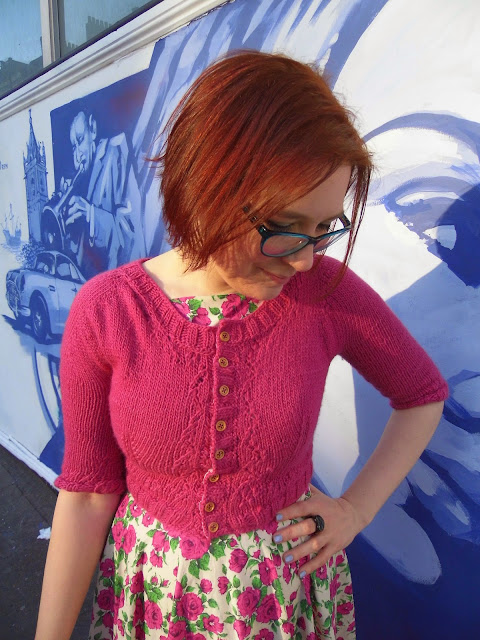 I did two things differently on this cardigan from the other Miettes I have knitted. I knit the size small, rather than medium. I'm really really happy with how it fits, especially around the back and through the shoulders (although I forgot to get photos of this) and I used petersham ribbon to stabilise the button bands. Now, this was a qualified success. I stabilised both the button band and the buttonhole band, into which I stitched buttonholes using my machine. The ribbon I used wasn't really stable enough to take the buttonholes and they don't look great. That's an understatement. They look like they were drawn by John Wayne Gacy. But I think the ribbon has made a positive difference to the button-bands so I think on my next cardigan, I will sew the ribbon on the button side only. Or, I'll find a better way to do the buttonholes and stop asking serial killers to help me with my craft projects. 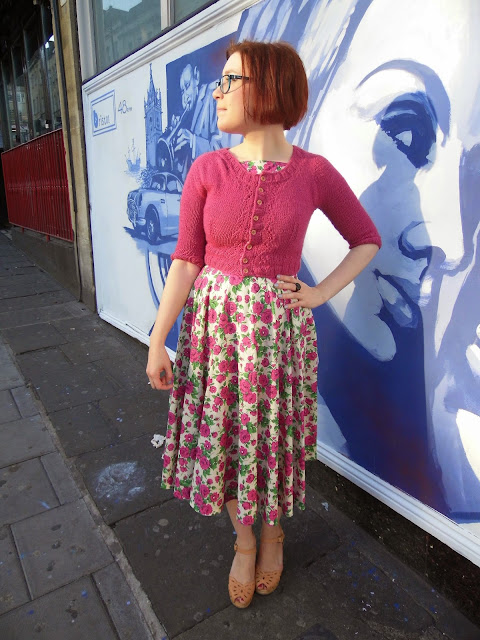 This picture really adds nothing to the post, but I loved this outfit. The fact that the colour of the cardigan so perfectly matches the roses on my dress was accidental, and it makes me really happy. And I LOVE these shoes, too.

I steam blocked this cardigan, just to try that method out. I think wet blocking is probably better, and I'm going to get some pins so that I can make the lace pattern open out a bit more. The other thing I decided after finishing and wearing this is to use a more flexible cast-off for the waistband and the sleeves, as the sleeves in particular are a bit restrictive. I followed this tutorial to bind off the body of the cardigan I'm knitting at the moment and it's much more suitable. I also bought some Knitpro needles, which are MUCH nicer to knit with than the cheap metal ones I had been using up until now.

So, yay knitting! Sewing is still my main squeeze but I am so enjoying having the ability to knit my own colourful cardigans as well. The next step will be to master cables so that I can knit a Marion cardigan and then it will be time to branch out into other knitwear designers, I think!

Anyway, back to Bristol. After a day of wandering in the sunshine and eating tasty food, Nic and I went for cocktails at a bar called The Milk Thistle. Bristol seems to have cornered the market in those bars where you have to find them and then ring a doorbell to be admitted, and this is one. We got there early and were seated at the bar in one of the rooms - which seemed to have some sort of bizarre taxidermy theme - and had a few cocktails before going to the gig. If you're ever that way, I very much recommend it. It was eccentric and friendly and fun. I wish Leamington had somewhere similar. 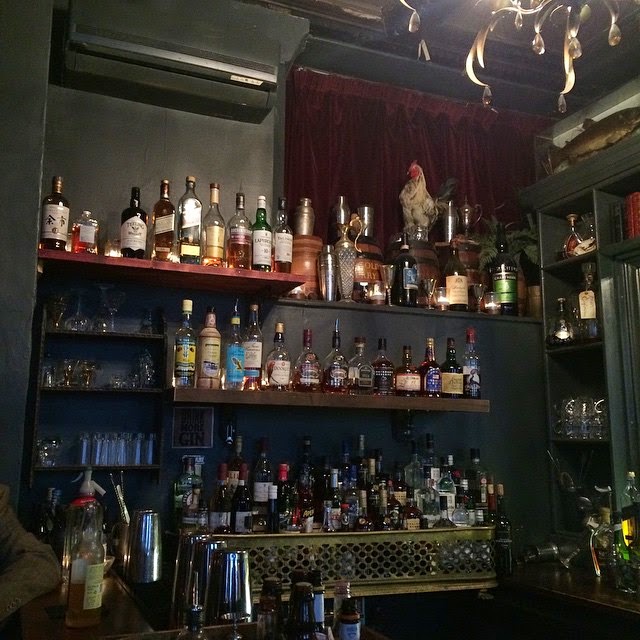 Nic and I had tickets to two gigs on the Sunday and there was another, free gig that we wanted to go to. Also it was rainy in the morning, so we didn't do nearly as much roaming. We still had a wonderful day, and Nic found where Fabricland was so I could check out the shop of my favourite website. And look - that link isn't an affiliate link, but if you've never visited the Fabricland website and you're in need of cheering up, I strongly recommend that you click that link. Very pleasingly, the shop is very much like the website. 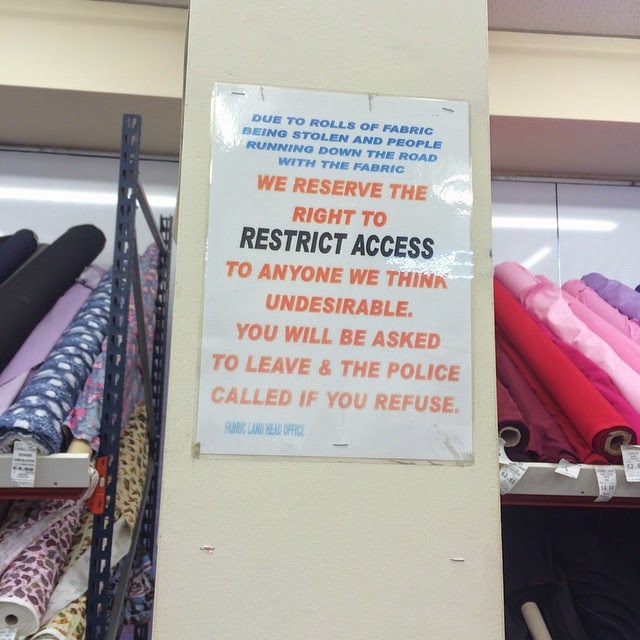 We also walked down to the harbour, partly because Nic wanted to see the statue of Cary Grant. It's sort of a sad statue, to be honest, because it's in a horrible newly developed shopping centre area. It was perfect for taking twatty tourist photos with though... 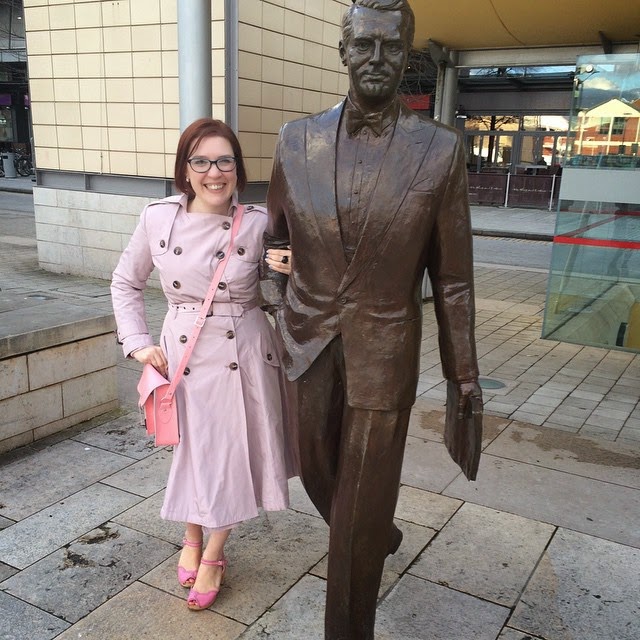 The Doctor John gig was pretty awesome. The man is 74 years old and he had to be helped onto the stage, but he played until they had to basically drag him off. He was joined for a few numbers by saxophonist Pee Wee Ellis, who is 73, and was playing his third gig of the day. The band leader was the incredible Sarah Morrow, who plays the trombone. I've never really thought of the trombone as a sexy instrument, but she was fucking awesome.

Aw, who am I kidding. The trombone has ALWAYS been a sexy instrument...

(That one's for lols, but I'm not going to lie. I have a major crush on Wendell Pierce that his role as trombone-playing Antoine Batiste in Treme has only escalated.)

After the gig we had a late drink at Small Bar and went back to our hotel. I had a bath and read a trashy book, and it felt very holidayish indeed. We'd only been away for two days but it was a truly lovely holiday.

It got better, though. When we got to the railway station the following morning to catch our train back to Leamington, Clarke Peters was there with his wife, catching his train back to London. I didn't want to bother him by asking for a photo or autograph or anything, but I did want to thank him for both amazing gigs (we saw him a second time on Sunday, taking part in a big band celebration of Louis Armstrong) and he was SO sweet and charming. He even shook Nic's hand and wished him happy birthday. Lester Freamon!

It was back to real life with a bit of a bump on Tuesday, when I had to go to Slough for work. That's not a sentence anyone should have to say, but I did get a lot of knitting and reading done on the journey to and from that charming town.

Right, anyway. It's Friday night and there's wine to be drunk. It's been a short work week but at the same time, it's been long as fuck. I need to go and do some relaxing because I have a fun-filled weekend ahead. Happy Friday night, everyone!
Posted by Roisin Muldoon