AHOOOYYY THERE MATEYS! It's Friday! It's Friday and, for the first time this week, I woke up feeling well. It's only been a cold, and I've been able to work through it, but MAN, it has made this week a massive drag. I had a few pressing deadlines at work, and then a few arbitrary and annoying last-minute deadlines were thrown into the mix - I've basically spent this week on the sofa, cussing out the world.

I'm still not 100% better - I'm sniffling like nobody's business and I can feel a tension in my neck that is partly due to the fact that I have been writing all week and partly, you know, having a sore throat and that, but I am feeling chirpy enough to do something other than knit and watch eleven thousand episodes of Law & Order UK. So I'm calling it an improvement. Just in time, too, as I'm away to London tomorrow for a museum visit, afternoon tea, fabric shopping and cocktails with some sewing friends. As Peggy Hill would say, HO YEAH!

That's the craic with me. No sewing this week - seriously, I have basically only been on either the sofa or in bed (working from home for the win) but, maybe this afternoon. My sewing machine is winking at me from the corner and I have some mad fabric that's waiting to be made into some sort of impractical party frock. You know, standard. But, like I said in my last post, I do have a queue of stuff to blog about. Rachel commented on my last post to say that when I blog a dress, her five-year-old daughter shouts, "Dolly Clackett's got a new dress!" Well, Rachel's daughter:

DOLLY CLACKETT'S GOT A NEW DRESS.
(Seriously though, is that not the cutest damn thing you've ever heard? That really made me smile.) 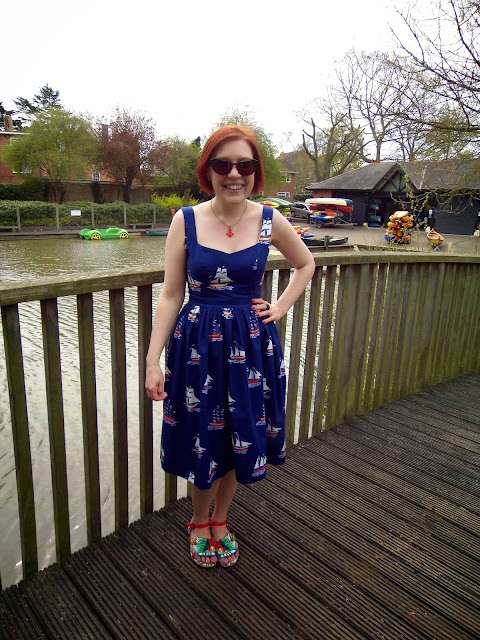 Dolly Clackett has a new dress and a fat face, apparently. And she also has prescription sunglasses now, which look a lot less goofy in real life. Maybe.

So. The story of this dress is that I used to have a different dress made out of the same fabric. It was a By Hand London Anna dress with a gathered skirt and you can see it here. I loved that dress but it became too big, and it didn't survive one of my many wardrobe culls. I can be pretty brutal, even with handmade dresses that I love. Anyway, a few weeks ago Sharne spotted some of the fabric (which is 'My Favourite Ship' by Sarah Jane for Michael Miller) at a ridonkulous price in Abakhan (like, £5.95 a metre) and she very kindly bought a couple of metres for me and popped them in the post. Sewing people are the bomb dot com, and that's the truth.

The other truth is that, despite the following facts, I never seem to have enough nautical-themed dresses:


So, you know, another dress with nautical shit on it maybe isn't that necessary. But who cares, right? 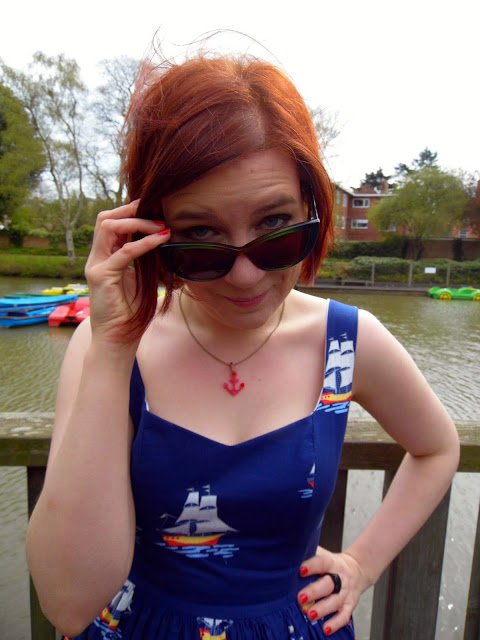 Seriously don't lecture me about learning to swim, because I don't want to hear it.

I still have a little bit of work to do on the Kim bodice to get the fit just right. I've re-drawn the straps to make them substantially shorter, which I thought might make shortening the bodice unnecessary. I think I could still stand to shorten the bodice a bit. I could go all-out and do a slight FBA as well but to be honest, what's stopping me from doing that is that I don't really mind my bust being a bit downplayed, here. I don't know. I still feel pretty exposed in anything other than a high neckline. Those are minor things though and I'm mainly pointing them out because I feel like I should. I'm super happy with this dress. So happy, I'm even going to show you my Derpy Back. Prepare yourselves: 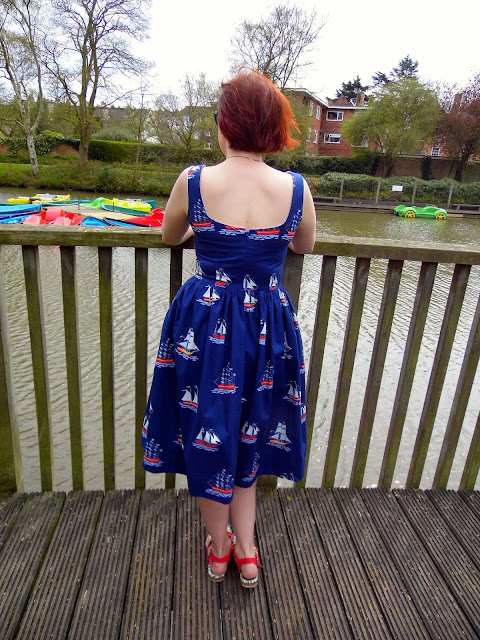 Just looking all casually here at the pedalos. Yeah - Leamington might not have the sea, but we do have a place where you can hire pedalos shaped like cars and swans and stuff. You can hire actual boats, too, but that's not as funny. I'm standing on a little bridge here, which seemed like a good place to take photos, but we kept being interrupted by this couple who... I don't know what they were at, to be honest. They were either powerfully curious at the act of someone having photos taken or they just really enjoyed crossing the same bridge OVER AND OVER AND OVER AGAIN. 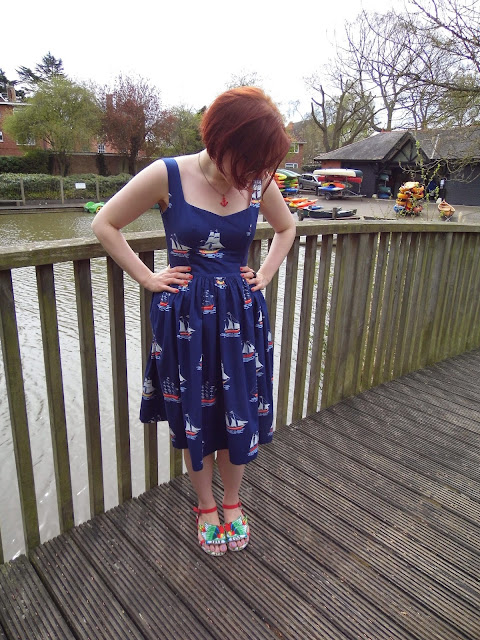 In all seriousness, I was shaking my head here. Why does the public have to ruin public places?!

In honesty, the bridge was already kind of my back-up photo location. Right by this bridge is a little children's play area that has a pretty boss pirate ship climbing frame/slide deal, only when we walked past it initially there was a really sketchy guy sitting on the merry-go-round thing. Like, you couldn't make it up - it was some sketchy looking dude in his 40s, sitting on his own in a children's play area, with his hands in his pockets. It was like something out of Brass Eye. Or the Daily Mail. There weren't any children around, so it could have been worse, but I didn't especially want to engage with him. However, the couple on the bridge were such an irritant, we decided to go to the little play area anyway. The sketchy guy had moved on, but that damn couple followed us! I'm totally serious. Anyway, who cares, because: 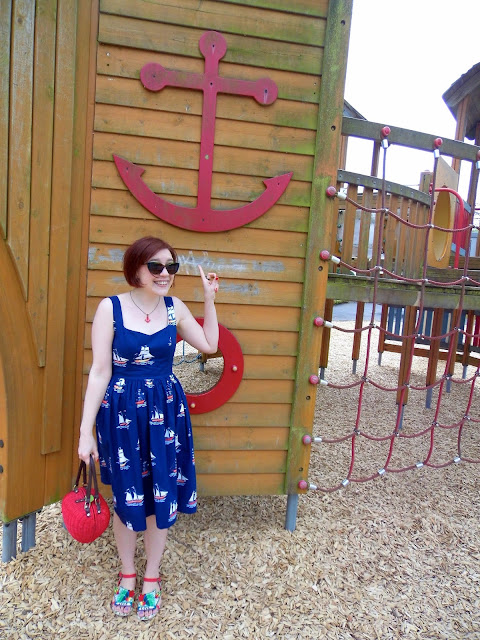 The fake pirate ship has a steering wheel, which I desperately wanted to have photos taken on. I wasn't sure I'd be up to climbing up the rigging and, foolishly, thought the best way up was by going up the slide. "How hard can it be?" I thought, "It's only for small children!" WRONG. 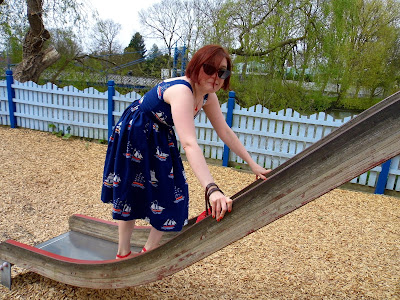 Nic did take some photos of me at the steering wheel thing, but to be honest I look like a complete dick in all of them. So here's me looking out to sea. I mean, looking out over the park, and thinking about my lunch: 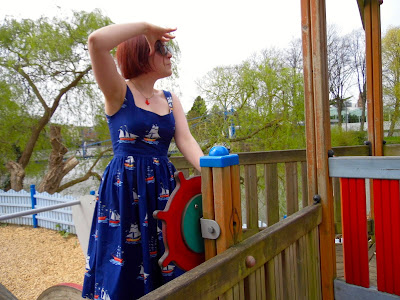 I bet you're wondering how I could look more like a dick in the photos that I deleted than I do here. Ha ha!

The only way down was to take the slide. 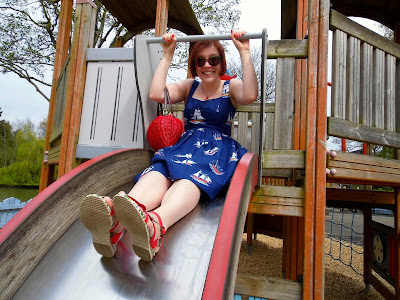 Honestly, you guys. The things I do for this blog. But also this was the best lunchtime I've had in months. After we played on the slide, Nic and I went and bought sandwiches and had a little stroll in town, and then I came home and finished up my work for the week. Hurrah! We're going to head out shortly for a walk and to do some grocery shopping (translation: buy some wine) and I might even get some sewing done when we get home.

The name of the dress is a reference to two things. One is that I was listening to Elliott Smith while I was sewing it - I started with Figure 8 and moved on to XO - but also, you know, it has boats on it. They're pretty big boats, but Jaws is one of my Top 5 Favourite films. It's a film that I never don't feel like watching, if that makes sense? Like, I'm always happy to watch it. I'd be happy to watch it even if I had already watched it that day. Jaws is another reason why I'm in no massive hurry to learn to swim. No, that's a joke, mostly.

I love everything - seriously everything - about Jaws. I think it's pretty much the perfect film. But, and think me shallow if you like, but seriously one of my favourite things about the film is Murray Hamilton as the Mayor of Amity, Larry Vaughn. I mean, come on: 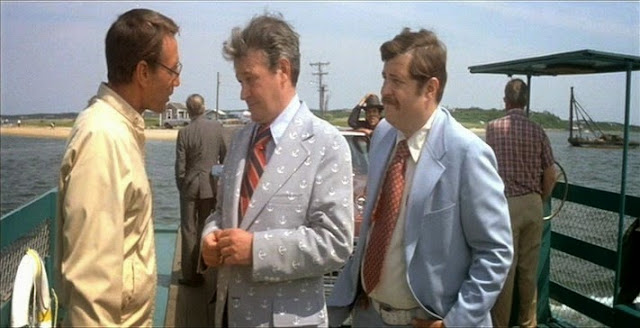 LINEN BLAZER WITH ANCHORS ON IT. THIS IS NOT A DRILL. That's also a nice tie there, boss. Maybe it's weird, but I am totally inspired by this. Maybe I should make a blazer out of that Robert Kaufman anchor-print chambray that was everywhere a few months ago. I reckon I could wear that. I wouldn't look as totally rad as this guy though, sadly. 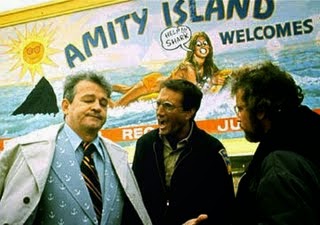 You know what I'm saying, right? I just don't have that kind of panache.

Anyway, that's my nautical Kim dress. You'd better believe I'll be packing this when we next go to visit Nic's mum and dad at the seaside. Hopefully I'll have some kind of nautical blazer to wear with it by then too. Watch this space.

Right lads, I'm going to head off here and go out and buy some wine. Farewell and adieu, you fair Spanish ladies.
Posted by Roisin Muldoon