It's a beautiful, sunny day and we're in an opticians. It doesn't get any better than this.

Hello! It's Thursday afternoon, which is my Friday this week as I have taken tomorrow off. Dudes, I have needed it. This week has been pretty tough. I know you're probably all pretty much over me crabbing about work, but I have had a stressful week. I ended up crying on my walk from work to the train station yesterday afternoon - not because anything particularly bad happened but because I had just hit a wall of feeling totally fed up. I have an extra project on top of my usual workload and it is just doing my head in. Nothing seems to be going right, it's a huge time-suck and it's been making work really hard. I've also been ill - the cold I had last week turned into a chest infection, so that was fun.

Anyway, last night I came home from work early to have my hair cut - I was never more grateful that my salon offers its customers wine - and then Nic and I went out for dinner with friends. I was working from home today and I was a bit kinder to myself, and I'm feeling a lot better now. I'm not going to lie though lads, alcohol helped. So did getting something pretty in the post this morning. What can I say? I'm shallow.

I bought an orange satchel from Zatchels last payday and it FINALLY arrived today. They do say that their bags can take up to 30 days to be dispatched which, fair enough, but each time I have bought something from them it's taken ages and only eventually been posted when I contacted them to remind them about it. Sigh. That's how it happened with this bag too, which is very annoying, but the bag is pretty awesome so it could be worse.

Two things made me want to buy the bag. One is that I have quite a few satchels now and, you know me, when I find something I like I essentially want it in ALL THE COLOURS. The other is that, at some point at the end of last year, Heather B posted a picture of Miss L-Fire's lobster sandals on Instagram and a whole outfit based around it popped into my head. I pre-ordered the sandals as soon as they were available and... you know where this is going, right? 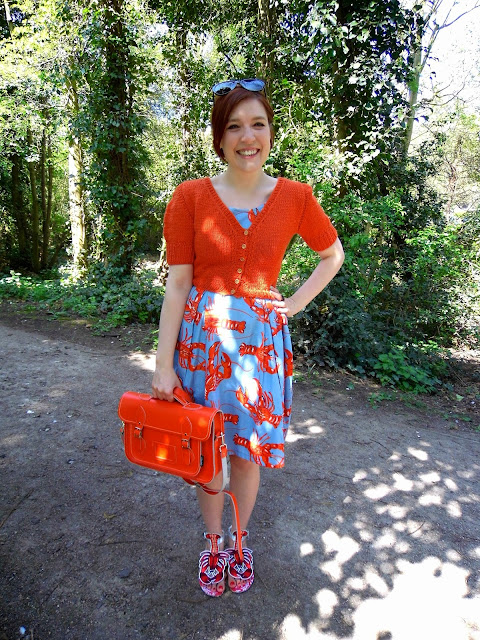 I knitted an orange cardigan to wear with my Lobsterlex/Lobster sandal combination. YEAH! This is an Andi Satterlund 'Myrna' cardigan and I did knit one of these before which is, quite frankly, kind of embarrassing now. I hated the yarn (it was that shitty Rico cotton yarn) and also, I misunderstood the pattern and knitted it too short. So this one - while not perfect - is a massive improvement. It's gratifying to know that I am getting better at this. 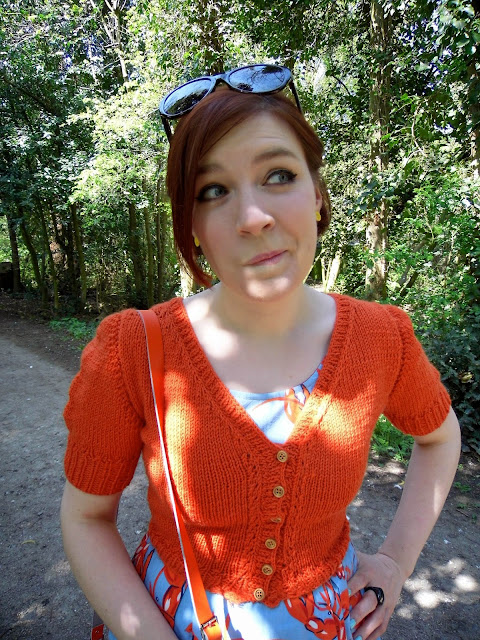 So. Myrna details, right? I knitted this using Cascade 220, but the superwash rather than the...erm, normal? Sorry, still don't get yarn weights. Anyway, I bought this because it already comes in a ball rather than in a skein and so I wouldn't have to wind that shit into a ball. Eh. That didn't really work but the yarn itself is super to work with - it's soft and springy and not too fluffy. And it comes in basically EVERY colour so it might be a while before I knit with anything else. This colour is called Pumpkin and it's not aggressively orange but I do kind of wish I had bought the brighter orange, which is called Blaze. It's not even that I like the colour better, it's just that the name is awesome.

Does anyone else remember Streets of Rage 2?

I knitted this cardigan up really quickly. I had to go to Slough for work the Friday before last and, although I have a Hetty cardigan on the go, I didn't think I'd be able to concentrate on the sleeves on a train journey so I cast on Myrna. By last Sunday it was ready to be blocked, so it took me just over a week! Granted, I was ill and spent more of that week knitting on the sofa than I usually would, but still. This was a lovely mindless project because it's knitted mainly in stockinette. There's a little bit of lace detailing around the neckline and waist, and I really enjoyed knitting the v-neck. The sleeves are fun too, with the sleeve cap done with short rows. I loved knitting the sleeves but they're part of the reason why I'm not sure how much I like this cardigan. Anne Shirley would be ALL over these puff sleeves but I'm not certain I like them on me. 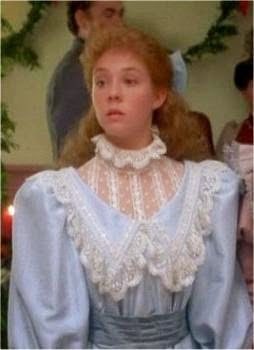 ANNE SHIRLEY DOES NOT APPROVE

Okay I am going to say one more negative thing about this and then I'll say nice things. I knitted this, like, two rows too long. I don't know if anyone else will care, but I would have liked it to be a fraction shorter. Also something weird happened to my cast-off at the corner of the waist ribbing where the button-band begins and I had to re-do it and now I think it looks a bit weird. Can you see it? Overall though, I'm pretty happy with this and I think I will knit another Myrna pretty soon. Maybe in the Blaze colourway... LOL JUST KIDDING. I didn't love this when I finished it, but actually I think I'll wear it a fair bit. I didn't have an orange cardigan and I think this will work well with quite a few of my dresses. But mainly I'm still totally buzzing that I can knit stuff that I actually want to wear and the things I'm being critical about are still pretty minor. I know I can and will get better at this with practice. 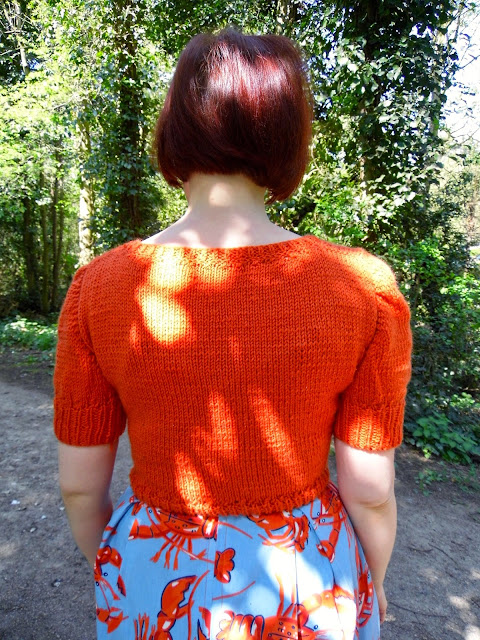 Here's the back view - I think you can see from this that it could stand to be slightly shorter. The pattern is designed to have a cute little keyhole feature in the upper back but I am just not good enough yet at casting off in the round to not make a mess of it. Also, I know that a short-sleeved cardigan is not terribly practical in general but I thought I would wear it less if it had a hole in the back - even one that was meant to be there.

I think it looks pretty cute unbuttoned as well... 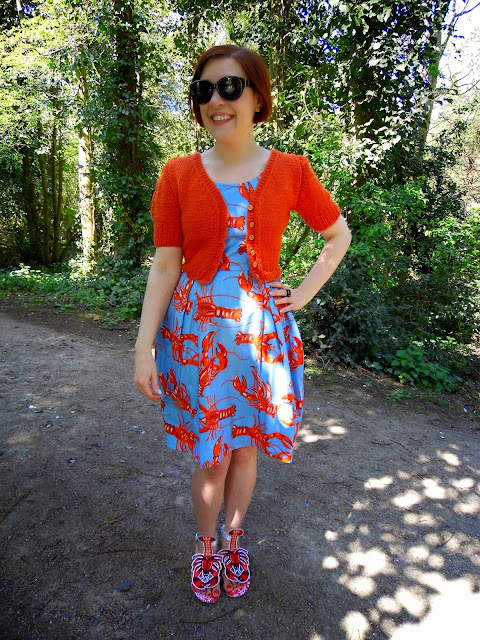 And... as for the sandals. Well, much like the bag, these were kind of worth the wait: They are totally and utterly ridiculous and I don't even care. I love them, and I promise I won't only wear them with this dress. It might be difficult to want to wear this dress with any other shoes, though!

Anyway, I'm going to leave you here. I have stuff to do this evening... housework stuff that I haven't had the time to do this week but also drinking wine and eating dinner and hanging out with Nic. Remembering that life is good even when work is hard. 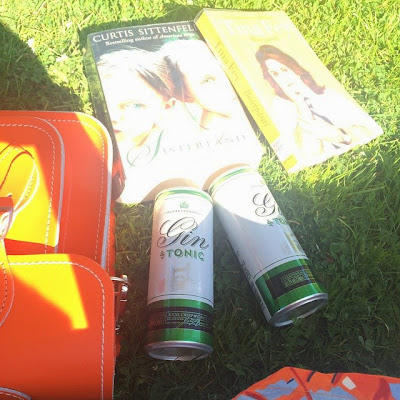