This wasn't amateur hour, Phil. People died because of your lack of supervision. There were raptors all up in the kitchen, Phil. IN THE GODDAMN KITCHEN.

Hello you lot, what's up? Things are grand here in Clackett Towers. Or at least, I'm feeling no pain. Work is still stressful as shit but Nic and I had a wonderful weekend celebrating the wedding of two very dear friends, and what's better than that? Not many things, that's what.

The wedding was a long day, but a really lovely one. The ceremony was held in the UK's oldest working cinema, The Electric and the reception in a village hall in Warwickshire. I was a bridesmaid, and Nic an usher, and the wedding had a rainbow theme. Seeing two people who are so important to us get married was very special and it was an emotional day. And, needless to say, I danced my ass off! 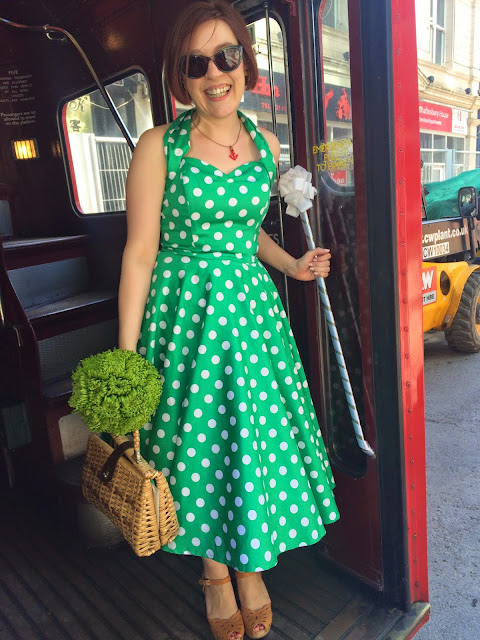 After the ceremony, we all boarded a Routemaster bus to take us to the reception. This was a lot of fun but, although I don't generally get motion sickness, the rickety suspension made me feel pretty bokey. I liked my green bridesmaid dress, which came from Vivien of Holloway. I have a few of these dresses already but, since I learned to sew, I've become very aware that the bodice on this dress is too long for me. Ah well. It was a fun bridesmaid dress and certainly beats the standard peach tulle nightmare. 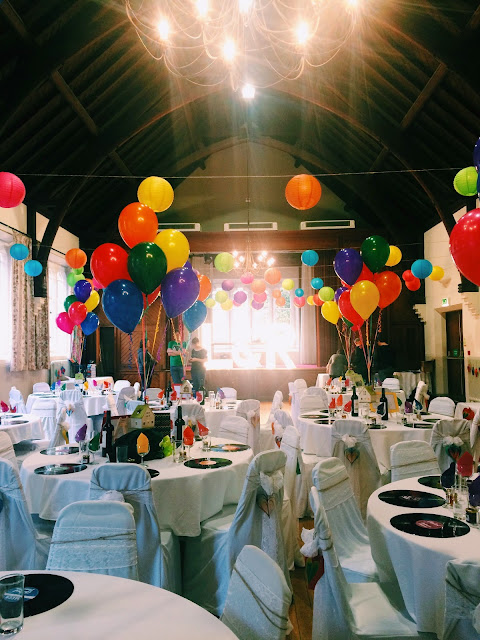 Inside the village hall. I helped to decorate this! The wedding had a rainbow theme and this room looked even better in real life. The bride's father made the light-up letters and the groom's parents put together most of the multi-coloured paper hearts on the backs of the chairs. They also made the centrepieces, which were tea-light holders and helium balloons. 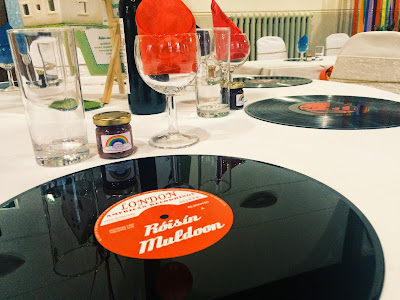 Each guest had a personalised place-setting made from a record. These were chosen to have some significance to the guest - mine was 'Loving You' by Brian Harvey. It's not because I'm a fan (or ever was a fan) of East 17, but because I never stop finding Brian Harvey eating too many jacket potatoes and running over himself funny. He's a national treasure.

It was a long day and my old housemate, who was one of the DJs, stayed with us so we sat up into the early hours of the morning catching up. Miraculously, none of us were hungover on Sunday but I must admit to still being pretty tired now. I'm getting old, what can I say?

I spent Sunday watching Law and Order UK and knitting - I really am getting old - and yesterday I got briefly out into the sunshine to take out a new dress that I finished recently. A dress that I made on a Sunday when I did have a slight hangover. Ugh, I'm so predictable. The dress is pretty cute though. At least, I think so: 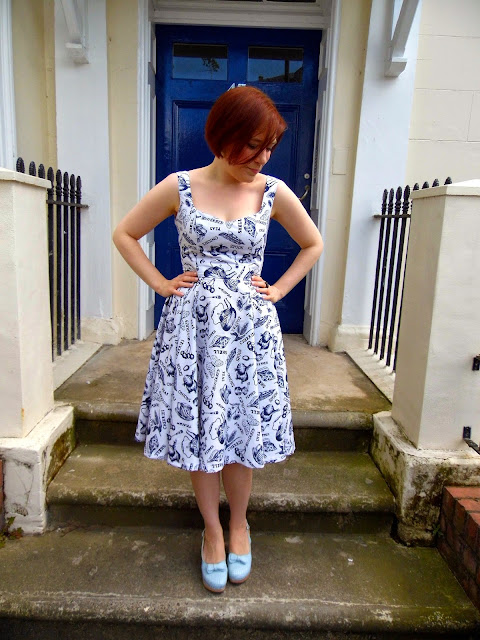 This fabric fits in well with a post about Rick and Lauren's wedding because the first time I saw it was on a day out in Banbury with them. There are a couple of fabric shops in Banbury, nothing too exciting, and this fabric made me laugh because the print is pretty random. Even by my standards: 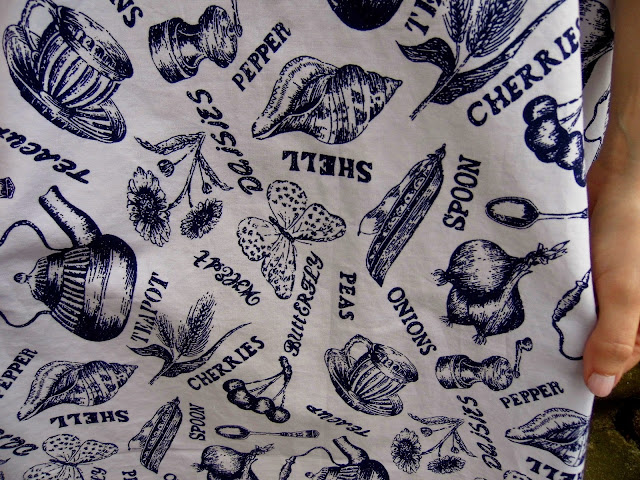 Okay, so a teacup, a teapot and some cherries. Nothing new there. A butterfly, some daisies and a shell? Right enough. Pepper, peas and onions... what the hell kind of shopping list is this, anyway? I can't quite explain why the fact that this print had onions on it made me laugh so much, but it did. I didn't buy the fabric that day but I couldn't stop thinking about it, and when Nic and I were in Bristol in March I went to Fabricland on one errand just to find it. It was £2.99 a metre, which was cheaper than it had been in Banbury, so I guess it was worth the wait. Also, in the meantime, I figured out why it had made me laugh so much - it reminded me of a few things we'd had in my house when I was growing up. Things such as this mug: 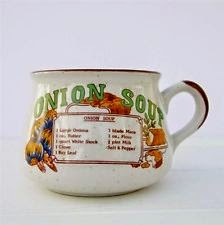 Children of the 80s. We all had these, right? Did any of you ever have soup out of them though? I never did - ours were used strictly as ornaments and also to put coppers, old batteries and sewing needles in. I keep seeing them in charity shops but nostalgia has never pushed me over the edge into buying one. Also I'm pretty sure Nic wouldn't allow me to. I'm not allowed to buy any more mugs.

ANYWAY THE DRESS. Pretty soon after I saw this fabric in Banbury, Amber blogged herself wearing a dress made from the very same fabric, but in a slightly different colour. On her, it looked less funny and more chic and I mentally filed the look away for later use. Eventually, I remembered Pinterest and pinned it. Which is all a long way of saying that Amber's dress inspired this one. I initially thought of using the Anna bodice and a full, pleated skirt but a combination of the Kim bodice and a circle skirt is what called to me. God, that was boring, sorry! Have another picture instead: 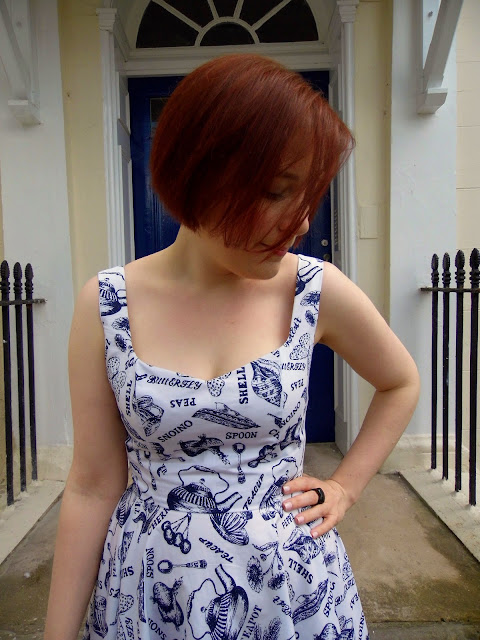 I'm not sure why I look so serious in these photos! I've gradually tweaked the fitting on the Kim bodice to a point where I'm happy with it, although I think I'd like to make the sweetheart shape on the neckline slightly more pronounced on a future one. Possibly.

There's really not a lot to say about this dress! I haven't sewed that much with novelty fabrics this year, which wasn't a deliberate choice. I was just feeling the florals. Despite that, I can't help but be pretty tickled to have not only a pair of onions on my bust but also a spoon pointing directly at one of my breasts. If you can't have fun with your clothes, what is even the point?! 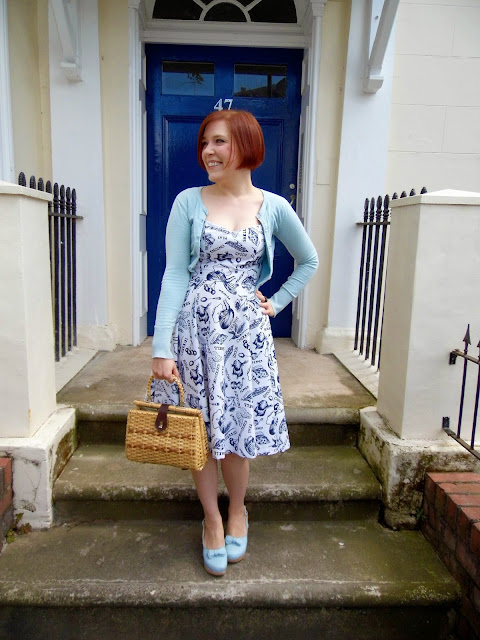 I was working from home yesterday and wore this to have a little cruise around town in the afternoon. I have to push myself to get out of the house on working from home days as I feel huge guilt for leaving my computer even to make a cup of tea, and it's not healthy. This little walk in the sunshine at lunchtime did me a lot of good, even if the shop I needed to go to was closed. Sadly, the sunshine was deceptive and it was too cold in just a cardigan and a strappy dress so when I got home I put on a big cardigan and got out the fleece blanket. It is still only April, I suppose.

Anyway, I must go here. Nic has put on Jurassic Park and I have the second sleeve of a cardigan to knit. I was worrying about knitting the sleeves on my Hetty cardigan but the first one went well, so I will hopefully have a new purple cardigan before too long. So goodnight!