I'm a panhandle hick and my wedding will be just another panel on my mother's family history back tattoo.

Hello! How's the form? I'm mostly very well, although I have a bit of a sore throat that is annoying me. I mean, really, throat? Again?

I had a very stressful and annoying week last week at work. I was let down very badly by the senior leadership in my team and, after all the hard work I have put in over the last few years in my job, it was a massive disappointment. Having been told that I had met the criteria for a (small) bonus and a small (not even at the level of inflation because I work in the public sector and we're in a pay freeze) pay increase, this was then withdrawn on the basis of issues in one project that I am responsible for. It was extremely frustrating because, despite the issues, the project was signed off on time, and it was signed off on time because I put in a huge amount of work to rectify the issues. It made me very angry that, rather than considering my good work and my many achievements throughout the year, I was punished for fixable errors in one project.

It was very upsetting on the day I found out, but since then I have been able to take a bit of a step back. I'm constantly stressed about work. This is, in large part, because I work in a stressful job, but it's also because I have been putting myself under huge pressure to be basically perfect at all times. To do this, I have worked long hours and made myself ill by pushing myself to the point of exhaustion. It's made me suffer physically and the anxiety has, at times, been crippling. And it's stupid, and it's still clearly not enough. So, in a weird way, although it was incredibly discouraging to see the evidence of that first-hand, it's also curiously freeing. I'm not going to stop trying hard to do a good job, and to do my job to the best of my ability, but I do feel now like I no longer have an impossibly high standard to live up to - because I know that the standard is totally bogus.

There are still so many things that I genuinely enjoy about my job - my colleagues and my line manager are fantastic and I find the job challenging and interesting. But I'm not going to let it dominate my life in quite the same way. So that feels weirdly good. I sincerely hope that I'll have far fewer reasons to write here that I've had a stressful week or that I've been too busy to enjoy my life. I even have a week off coming up to look forward to, so that will be good!

Anyway - that's a non crafting or shoes-related digression, so let's bring on the crafting and the shoes, right?! Those are the much more fun things in life. Nic and I had a little day out in Birmingham on Saturday and I took the opportunity to get some photos of my most recent hand-knit - an Andi Satterlund Hetty cardigan. This cardigan seemed very daunting to me because of the all-over lace pattern. I wasn't sure if I would be able to keep track of the pattern while I was knitting the decreases at the side, and I really wasn't sure if I was going to be able to manage the sleeves. However, this was much less difficult than I had anticipated and Hetty turned out to be a really interesting and enjoyable cardigan to knit. 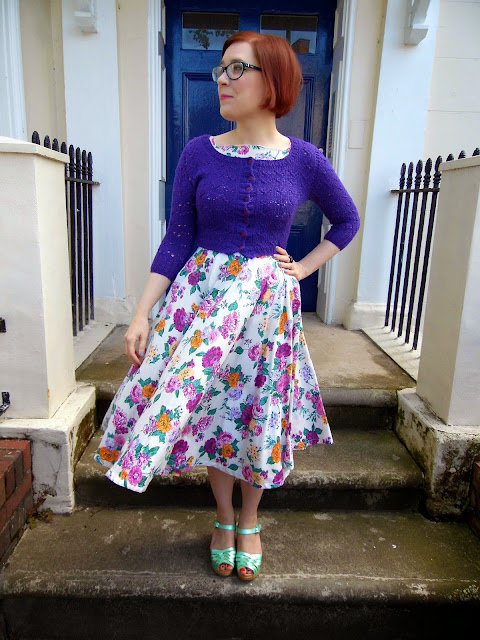 Purple cardigan! The yarn is Cascade 220 (obvs) and the colour is called Iris, although I think it has been discontinued. There are little flecks of blues and pinks in the yarn that make it very pretty, although it feels slightly scratchier than the other colours I have knitted with. It's grand to wear, though.

I knitted the size small and, as I said above, I largely found this to be a really enjoyable cardigan to knit. I had to rip it back to the armholes twice because I had made stupid mistakes but, by the time I had done that, the lace repeat was very firmly implanted into my head. This is a good thing - one of the reasons that I find knitting appealing is that my short-term memory for numbers isn't very good, and knitting is helping to improve that. My tip for knitting this cardigan is to memorise the lace repeat because, if you can read where you are in the pattern, it makes it much easier to keep the pattern straight and to know when to begin and end the lace repeat when you're knitting the short rows at the sleeve cap. 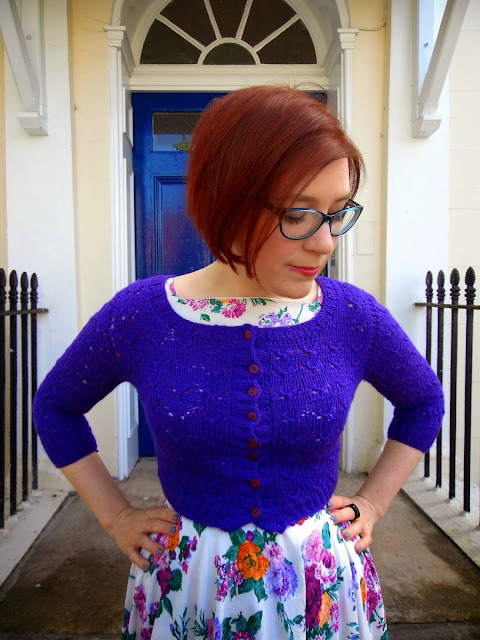 I have bought some pink yarn to knit another Hetty cardigan and I will make a few small changes. I really like the overall length but I would like the waistband to be deeper, so I will stop knitting the lace a few rows earlier and knit more ribbing instead. This will also allow me to fit another buttonhole and button in at the bottom! I'll also do as quite a few people have suggested for binding off the sleeves, and switch to a larger knitting needle for doing that. I did use a stretchy bind-off technique but the hem (is that the right word?) of the sleeves is a little bit tighter than I would like.

Those are only minor things though, and I've already worn this cardigan quite a lot since I finished it. I wasn't sure initially if the lower and wider neckline was going to be practical - so many of my dresses have higher necklines than this - but actually, I like how it looks. I love the shape of the neckline, and I think my ribbing there is really pretty and neat! I am very happy with how the cardigan fits - basically, I have learned to stop worrying about the button-bands pulling a bit because, as I gather, this is not unusual on cardigans that are designed to be worn with negative ease. Or maybe I'm just telling myself that. Whatever. 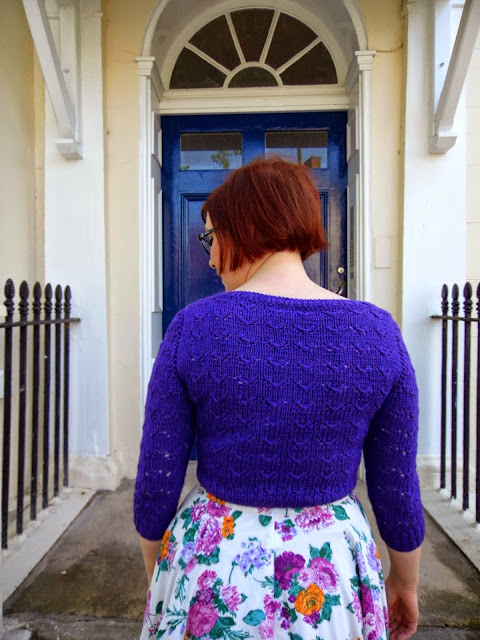 Here's the back! I'm standing awkwardly, I know, but this way you can see how lovely and straight my lace patterning is. Yay! I do think this would look better with a deeper waistband ribbing though, so I am definitely going to do that on the next Hetty cardigan. 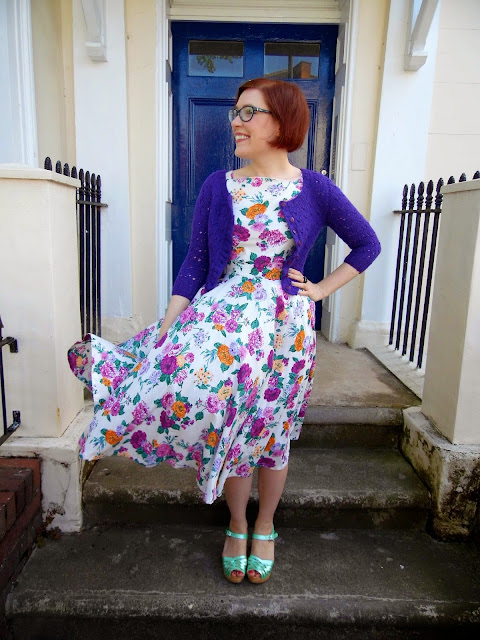 And here's how it looks unbuttoned. Yay! So, although I have been broadly happy with the other cardigans I have knitted, this is the first time I have been straight-up totally delighted with one. It's partly because I feel like I learned so much with this project and it really built my confidence - it was genuinely very pleasing to realise that I understood where the pattern was going and what I needed to do to get the lace repeat to work evenly on the sleeves. That felt like a big breakthrough. I can understand why so many bloggers start out by knitting Andi Satterlund's patterns because, while the instructions don't hold your hands, the designs allow you to learn techniques in a very manageable way. I can knit a lace repeat! And, as I discovered at the end of last week, I can do cable knitting! Yes, I have already cast on my next project - a Marion cardigan in bright green yarn.

I didn't sign up officially for Me Made May 2015. I wear handmade clothes almost every day and I knew that I would have too many things going on this month to make taking daily outfit photos anything other than a chore. I do often instagram pictures of my handmade clothes though, and tag them as such, so I decided I would unofficially play along. It's felt good, on days like Saturday, when both my dress and my cardigan were handmade! 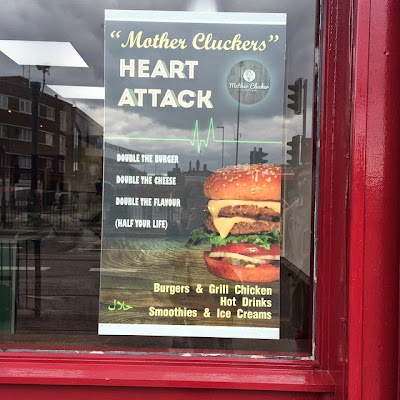 Birmingham shops have a strong pun game. I like the honesty that Mother Cluckers bring to their marketing.

On that note, I'm off to eat dinner and then crack on a bit further with my next cardigan. Maybe I'll even start thinking about my next sewing project. I do still sew, you know! Catch you on the flippedy-flip, my friends!
Posted by Roisin Muldoon