No wonder he changed his name. You don't get many Nigel the Greats, do you?

Evening all! I've emerged, blinking, from a lovely bank holiday weekend to another week at work. Dramatic sigh. It was a very good weekend, in which I was able to find the time to do lots of my favourite things. I bought (and drank) some gin, made a dress, did some knitting and spent time with friends, laughing and eating tasty food. It's a hard job, but someone had to do it!

I had had a very long day on Thursday - a 12-hour work day followed by dinner in the pub with friends - so I sacked off work at lunchtime on Friday, the better to get the value out of my bank holiday weekend. It's a lovely feeling and I'm looking forward to having a proper break at the end of the month. It was really cold on Saturday - or at least, it felt really cold - so I spent the afternoon holed up indoors, sewing. It's been ages since I spent a whole day sewing and I really enjoyed myself.  I was feeling inspired because, when she was in Paris a few weeks ago, my friend Emily bought me some amazing fabric from Petit Pan. It was a complete surprise and typically thoughtful of Emily. the fabric came to me via her sister Amy (who I happened to see before I saw Em) with the message, "I hope you're not offended by this!" Errrr what. The fabric is awesome: 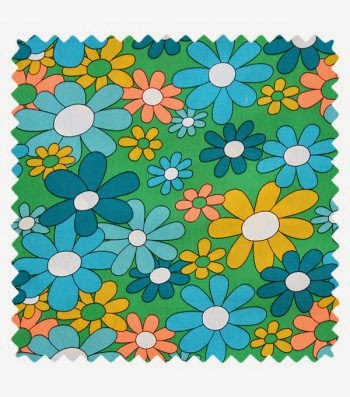 I did a little dance of happiness in my chair when I unwrapped this and immediately started plotting what to do with it. The print obviously called to mind a 60s-style shift dress, but I had 2.5 metres and I wanted to make something I would wear often. I wanted a full skirt, basically. So, on Friday I went and bought a bunch of yellow buttons and I made myself another McCall's 6696 shirt-dress. 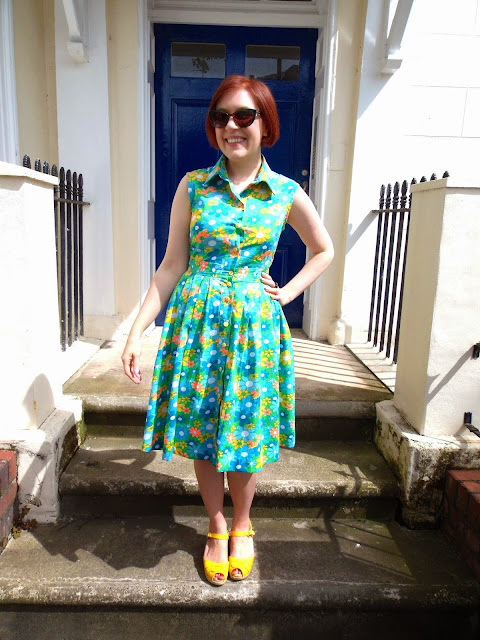 Holy bright sunshine, Batman! I was running late for a party at Amy's house when we took these photos, so we didn't have time to find a better location. In a way, though, the dazzling sunshine kind of works with the ridiculously loud print.

This is the fourth McCall's 6696 that I've made and I'm finally happy with the fit. It's still not perfect, but it's as close as I'm going to get, I think. I didn't get any photos of the back but it still blouses a bit more than I am strictly happy with - but, you know, I can't see it so I've decided I'm not going to fight that good fight any more. I have shortened the bodice by an inch and a half and, on this dress, I sewed the buttons on off-centre, and that helped. I also did my own button placement around the waistband, sewing three buttons close together to keep the fabric closed over my widest point - my stomach! 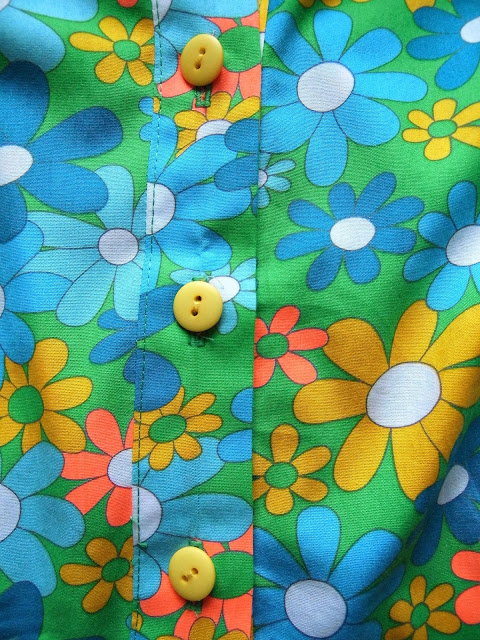 I bought the yellow plastic buttons in a local fabric shop. Green might have been a better choice, but all I wanted to do was accessorise this fabric with yellow and, indeed, I wore it with yellow button earrings (which I annoyingly forgot to get a photo of.) I think it also looks great - in a totally kitsch way - with my yellow Agatha cardigan: 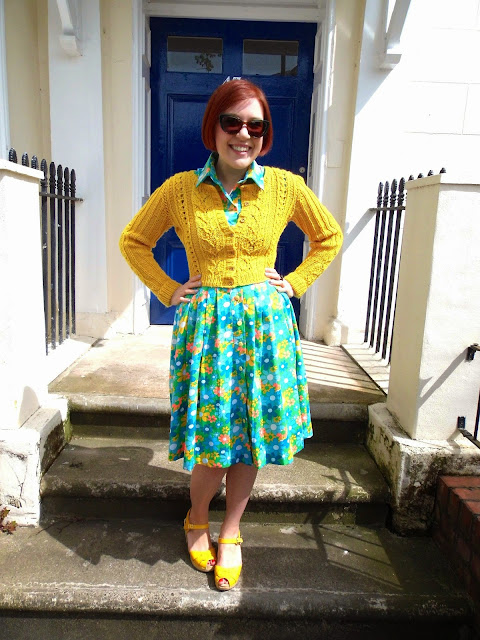 You'll not lose me in a crowd

Annoyingly, this is one of those projects that doesn't photograph as well as it looks in real life. I really love this dress. The fabric is beautiful - it's a very high quality cotton lawn and it is really enjoyable to wear. Also, I think the shirt-dress shape shows it off really well - I like the fact that it's quite a demure shape and style in such a wild print. In any case, I hope to wear this a lot over the summer. 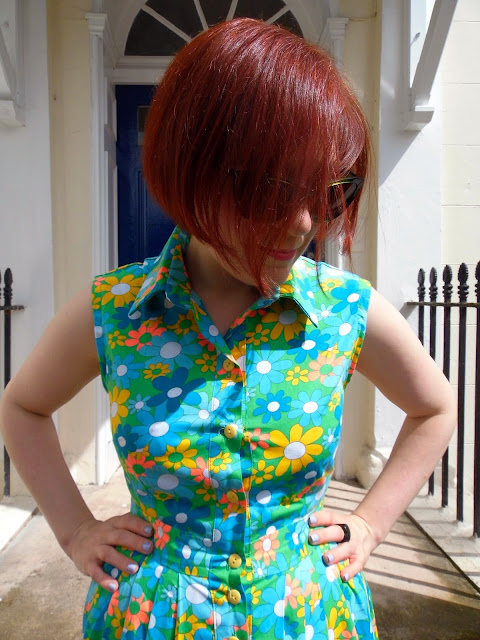 Here's a wee close-up of the bodice. I'm not entirely sure why I'm so dramatically not looking at the camera but I was honestly very hungry when these photos were being taken so my mind was elsewhere. The gaping there between the second and third buttons isn't there when I am standing straight, just so you know. I think having my hands on my hips was pulling the fabric a bit oddly.

I'm still not finished with McCall's 6696. I have another Liberty Carline one to make in purple, and I have plans to make one from the same wax cotton that I made the Bedelia dress from... and, no doubt, other fabrics will present themselves as being perfect for this lovely pattern. I'm really proud of the finish I achieved on this one, particularly the collar: 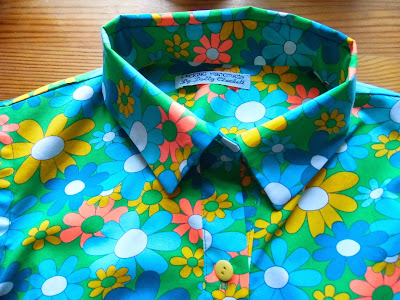 I found Andrea's tutorial at Four Square Walls to be particularly helpful, and following it made sewing this collar enjoyable. There's something very satisfying about the precision required, I think.

I spent most of Saturday sewing this dress, because I knew I'd be seeing Emily on Monday and I wanted to be able to wear the dress. Nic and I were out for most of Saturday - we went to Coventry with Amy and Barney to go to Ikea and the Coventry Transport Museum, and to go for a meal in Cosmo. I'm not usually one for all-you-can-eat places, because they're not usually too good for vegetarians, but the food is pretty good in Cosmo and the whole experience is charmingly insane. As our friends were driving, and were kind enough to park in Ikea, I finally succumbed to the siren call of the Tastrup rug and now our bedroom is approximately 300% more colourful: 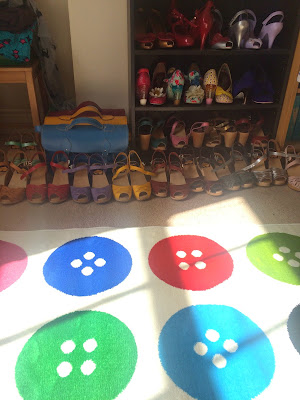 After such an exciting day, I was in no state to do anything other than lie on the sofa and watch trashy TV, so it was just as well that I had finished the dress on Saturday. Also, after eating so much at Cosmo, I'm pretty certain I'd have had someone's eye out with flying buttons. HEALTH AND SAFETY FIRST, PEOPLE.

Emily seemed delighted to see the fabric made up into a dress, and she even got to see a blog photoshoot in action, as Nic and I attempted to take some photographs that weren't completely sun-drenched: 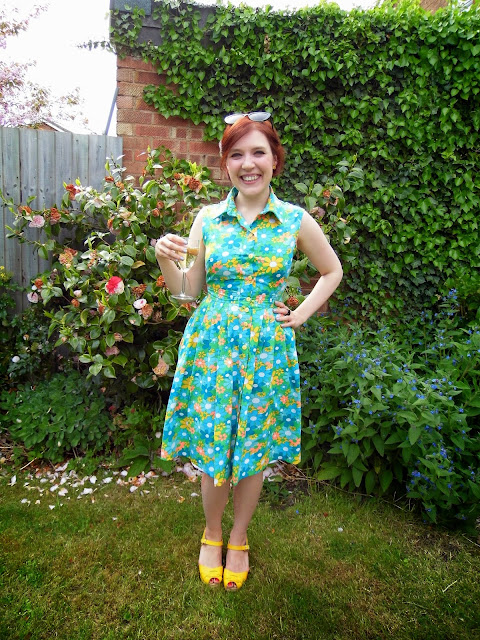 Here it is in its natural state: drinking wine

This dress was perfect for drinking wine in the sunshine with friends. It's a very happy dress - I enjoyed making it, and I am so touched by what a thoughtful and kind gift it was. I'm already looking forward to wearing it again! Maybe next time, I will try accessorising it with green. In fact, I have some bright green yarn on its way to me for another cardigan, so that's a distinct possibility!

Right-o. I'm old these days, so right now I want nothing more than to go and put my pyjamas on and have a nice cup of tea. So that's what I'm going to do!
Posted by Roisin Muldoon