I know I look square, but I'm like my father's tractor. I take a while to warm up, but once I get going I can turn your topsoil till the cows come home.

Hellllooo! Actually no I should say, "howdy y'all" because Nic and I have been watching Nashville again.

That's how finding out that S3 is online made me feel

Anyway. I was back at work today after a pretty blissful week off and, all things considered, it wasn't too bad. I sweetened the deal for myself a little bit by making sure that I would have a shoe delivery waiting for me when I got home from work. I also made sure that I had some carrot cake waiting for me when I got home (my friend Amy baked some for us over the weekend) so I'm basically winning right now, right?

Having a week off work was really good. After we got back from the coast and my parents went back to Northern Ireland, Nic and I decided to really rest and relax. It was brilliant. We didn't really go anywhere and mainly spent a lot of time dandering around in the sunshine, watching stupid films and chilling out. I spent some time knitting and sewing, and we were able to hang out with friends as well. I hadn't really realised until I wasn't at work how much I needed the break - I slept well for the first time in months and all the tension that I've been carrying around in my neck and shoulders suddenly lifted. It was very valuable and a good reminder of how important it is to prioritise life over work. I went back to work today feeling totally refreshed, which is excellent! Of course, it helps that I have a long weekend coming up next weekend - Nic and I are going back to Northern Ireland for a few days to go to a gig and to spend some time with family, which is going to be lovely. 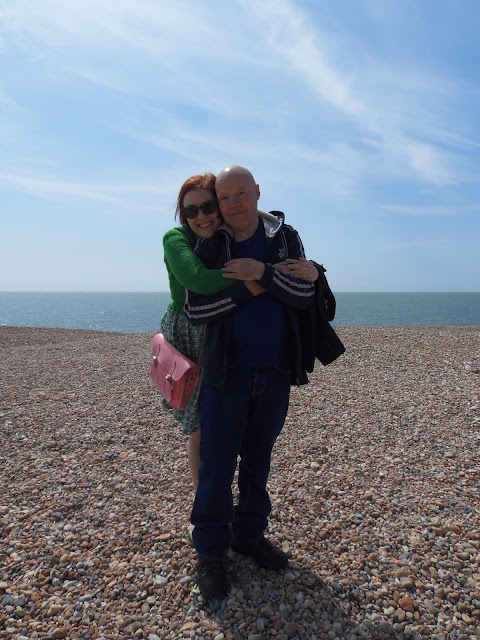 I'm looking forward to seeing Daddy's cheeky face again next week. Nic took this photo of us on the beach at Sandgate last weekend - Daddy isn't as serious as he looks here though!

I'm hoping that I can keep carrying this good mood and positive attitude towards work with me over the next few months, but I'm sure that I can. Life is really very good right now, with lots of very exciting things on the horizon.

So, as I mentioned, I spent a little bit of time sewing this week. My desire to sew has really been subject to ebb and flow this year, but last week inspiration struck. I decided to take part in the Outfit Along being hosted by Lauren Lladybird and Andi Satterlund and the other night I was hit with inspiration as to which dress pattern to use: an old favourite, Simplicity 2591. I don't have any photos of that to show you yet, but I so enjoyed sewing it that it prompted me to revisit another favourite Simplicity pattern - this time, Simplicity 2444. 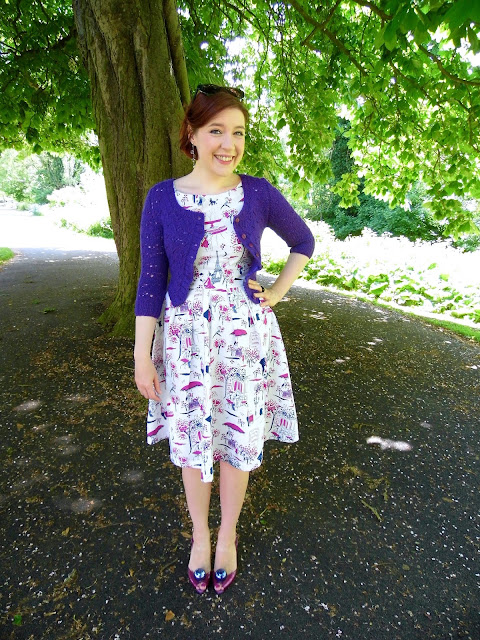 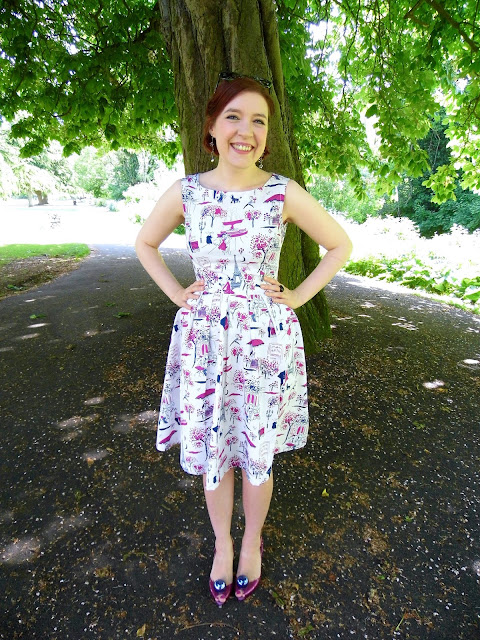 In any case, very few of my Paris-themed dresses fit me now, and similarly few Simplicity 2444s, so it really was high time to revisit this lovely pattern. What I should do with this fabric, which I had bought on impulse back in January, had been bugging me for a while. Going old-school Dolly Clackett on it seemed to work! 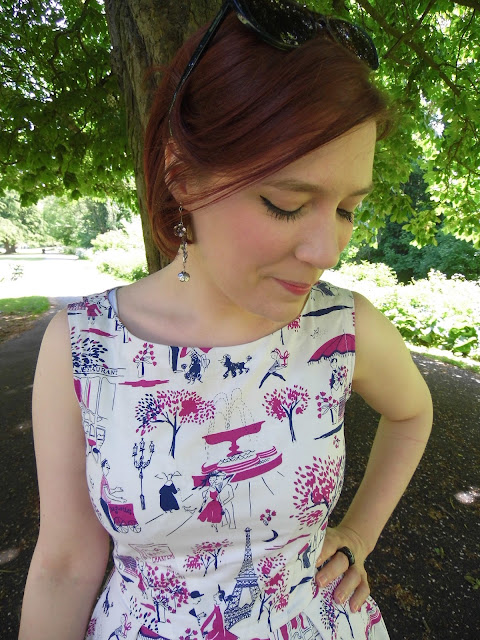 There isn't a great deal to say about sewing this. I sewed a size 8 basically straight out of the packet - the only alteration I made was to use a larger seam allowance at the shoulder seams, because this is an alteration I always make, and I omitted the pockets. I hardly ever sew pockets in dresses now, especially not if they're side-seam pockets. I didn't look at the instructions but I sewed pretty much to them - I really like the way the instructions have you sew the front, then the back, then sew them together (rather than sew the bodice and then sew it to the skirt).  I used white bias binding for the armholes and a white concealed zip, both of which I had in my stash. 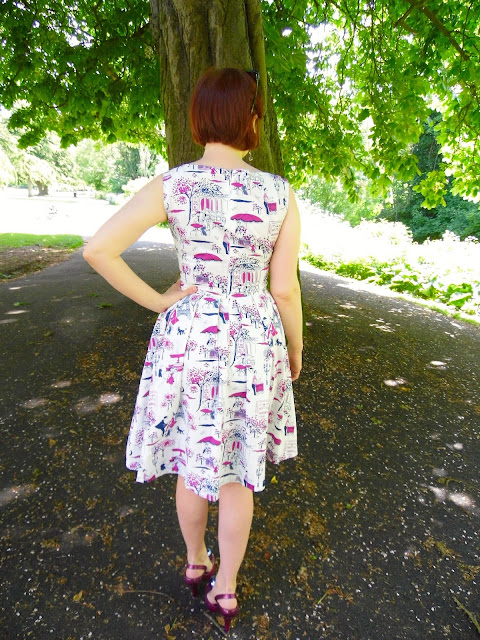 This fabric had hung around in my stash for a while because I wasn't sure whether the white background would suit my intensely Irish skin but, as I've taken a bit of sun recently and my skin is less blue than usual, I think it's okay. Obviously, I was charmed by the print also... 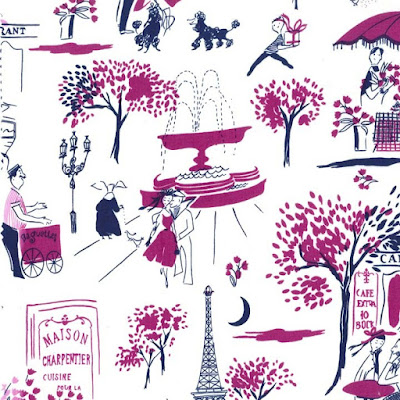 Nic actually picked this fabric out. I bought it on impulse, but mainly because he liked it so much - probably because it reminded us both so much of one of our favourite places in the world, Montmartre. We didn't exchange gifts for our first wedding anniversary but we have been talking about going back to Paris at some point this year. We might not make it as there are other travel opportunities that might take priority, but in case we do, I'm happy to have another Paris dress in my wardrobe. Even if it does mean that I'm increasingly becoming a pastiche of my blog personality.

Mainly it felt good to sit down at my sewing machine again, you know? So much so that I have another two dresses cut out to sew in the near future. As always, I have more plans than I have time, but I'm getting better at making that time for myself.

I wore this dress on Saturday afternoon - we had been out on Friday night, so Saturday morning consisted of pyjamas and nothing else - to have ice-cream in the park with Nic, drinks in the pub with friends, and dinner round at the house of different friends. It was a very lovely day. On Sunday, Nic and I went to Coventry with Rick and Lauren to a record fair and I found further evidence that I am becoming a parody of myself: 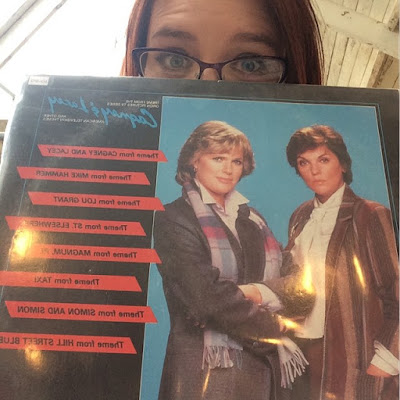 Yes, that IS in fact a 12inch record featuring the Cagney & Lacey theme tune and "other American television themes". Actually, the version that they have of the Cagney & Lacey theme is not that which is used on the show, but it's still totally amazing that such a thing exists. What's even better is that side B is just Mike Post incidental music from cop shows. My love of Mike Post is well-documented, so this was a completely awesome find. I mean, he's my favourite composer. Nic laughed when I told him that, but I'm totally serious. You tell me the man who wrote the theme to Murder One isn't a stone cold genius.

Right, anyway, that's enough of that. I'd need to slide on here because I'm tired, and the rest of that carrot cake is calling to me. I'LL BE RIGHT THERE CARROT CAKE. 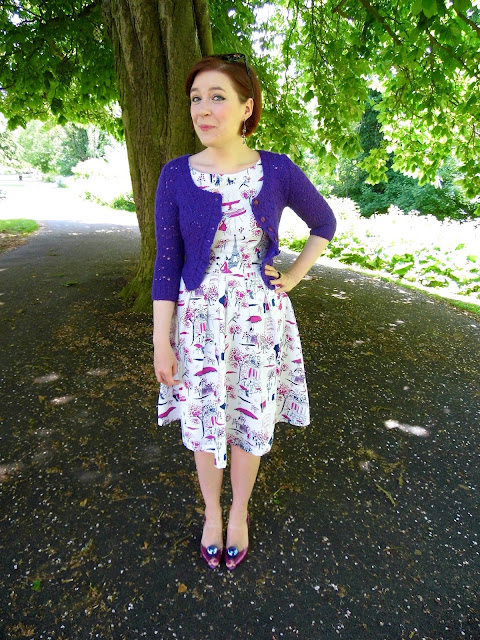 Did I hear you say cake?
Posted by Roisin Muldoon