Hey hey! Hello everyone! I hope you're all well - the craic here is ninety-one, as usual. I had such a thrilling work day that my line manager and I are considering making it a weekly competition to see who has completed the most tedious task that week. Luckily for me, this week I think she would actually take home the prize but it's still only Monday. There's time for me to have the arse bored off me yet, right? It's weird in my job in that the summer months are so quiet in comparison to all of the rest of the year, which... well, you have heard me complain about it before. It's not that I miss that frantic pace - I don't - but as it's how I am forced to work for most of the year, it's hard to get used to having a bit of downtime.

The good thing is that, as I'm not so horrendously busy I have a bit more energy to sew, which is really nice. As well as that, I had some completely awesome fabric to sew with - this Kokka Echino linen fabric: 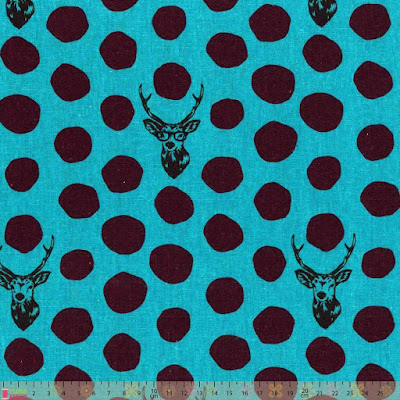 Plush Addict got in touch with me a few weeks ago and offered to send me some fabric to make a dress. They've also sent me something for you guys, which I will tell you about shortly. Anyway, it's difficult to resist free fabric so of course I accepted. I spent ages browsing their frankly massive selection before deciding on this Kokka fabric, which I have wanted for ages. I've had it pinned on my sewing inspiration board on pinterest for about a year! Plush Addict sent me 2.5m so that I could make another McCall's 6696 shirt-dress. What can I say? The idea of a hipster shirt-dress was too hard to resist.

I was surprised by this fabric when it arrived. It's a cotton-linen blend and it's a heavier weight than I was expecting it to be, with a far less loose weave than I normally associate with linen. This didn't pose me any problems, but I was a little bit concerned that it might be a bit bulky when it came to making the collar and the buttonholes. I needn't have worried though. The fabric doesn't have much drape to it, but I had no problems at all when it came to making the dress. 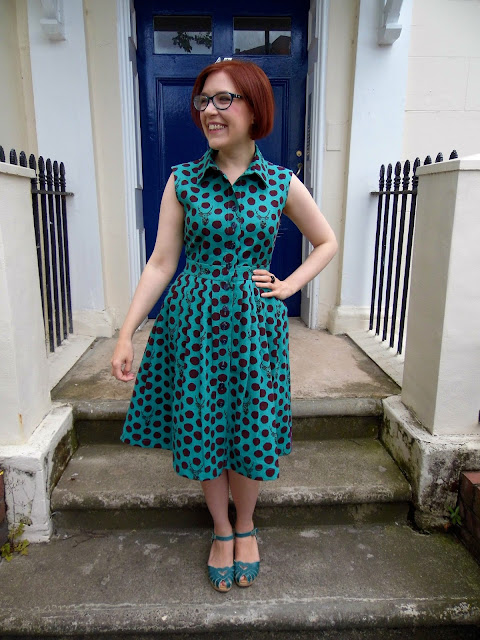 Where I Come From dress - McCall's 6696 in Kokka fabric, worn with Swedish hasbeens heart medallion sandals

The only problem I had was one of my own stupidity. 2.5 metres turned out to be just enough to cut this dress out and I was so focused on making sure I had everything the right way up and on the straight grain (I'll often take low-risk risks with grain, but I didn't want to with linen as I really didn't want it to warp) that I didn't pay any attention to the print placement on the bodice. Which is how I ended up with stag headlights, so to speak: 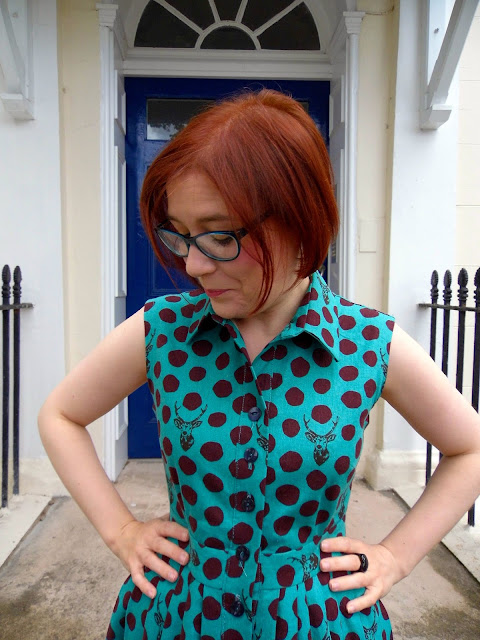 Yeah. Those are some Stag Boobs, right there. Whale boobs one week, stag boobs the next. WTF Roisin.

I tried the dress on after attaching the button bands and before attaching the collar and it wasn't until then that I noticed the placement of the stags. I ran into the living room and asked Nic if he noticed anything unusual about the dress. He's a pretty observant guy, particularly when it comes to my handmade clothes, and thankfully he didn't notice the stags! This gives me reassurance that people won't be pointing and laughing in the street - well, not for this reason anyway - but of course, people reading sewing blogs are likely to notice! It's not ideal, but it could definitely be worse. It hasn't put me off the dress anyway, which is definitely one of my favourite dresses I've made this year.

Despite my initial reservations about the weight of the fabric, it turned out to be lovely to wear. Perhaps because it is a cotton-linen blend, it doesn't crease as badly as linen does, but it is cool and breathable to wear. It was gorgeous to work with too - it pressed well and didn't fray. Also, looking at the stag's cute little face made sewing this a treat. I didn't want to gather the fabric, though, as I did think it would be too hefty for that, so instead I pleated it at the lower back: 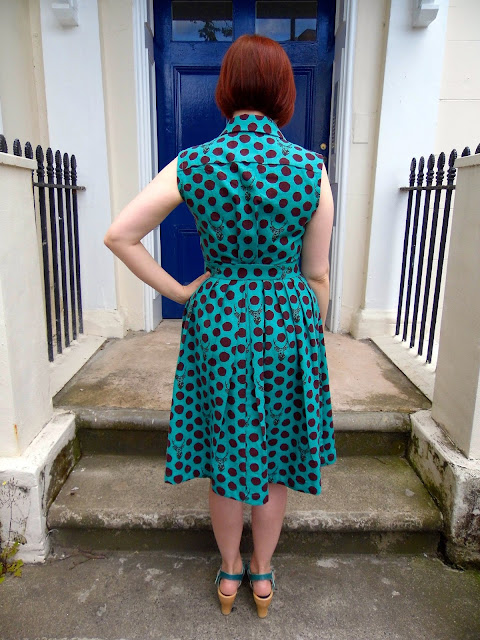 I didn't have any issues with the buttonholes, but elected not to even attempt sewing one in the collar stand, as you usually would. I mean, I'm never going to wear this buttoned up to the neck anyway. The only other way in which I deviated from the pattern was that I top-stitched the button bands rather than hand-sewing them. Nae bother. 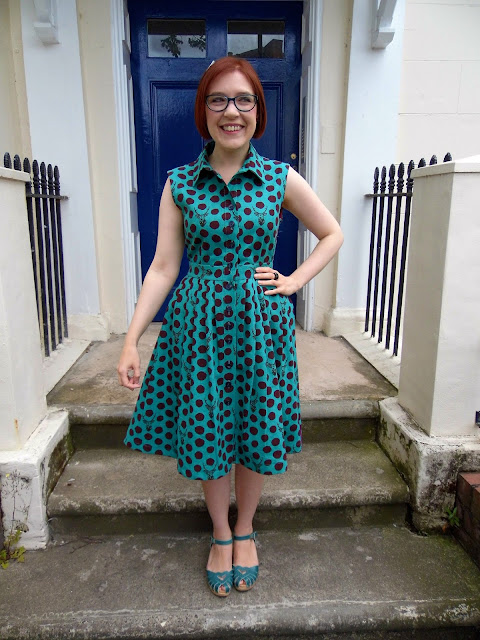 The finished dress feels a little bit on the big side, but I think that this is because it's the style of the dress, and it's also that I'm more conscious of it because my preference is usually for slightly more fitted dresses. It might be more flattering if it were a little bit smaller, but I know that in hot and humid weather a slightly looser-fitting linen dress is going to be invaluable. I'm thinking that it's likely to be hot as balls in Paris in August, so I'm sure this dress will be really handy then.

It was a bit chillier than that on Sunday, though, so I wore it with a cardigan. Obviously. 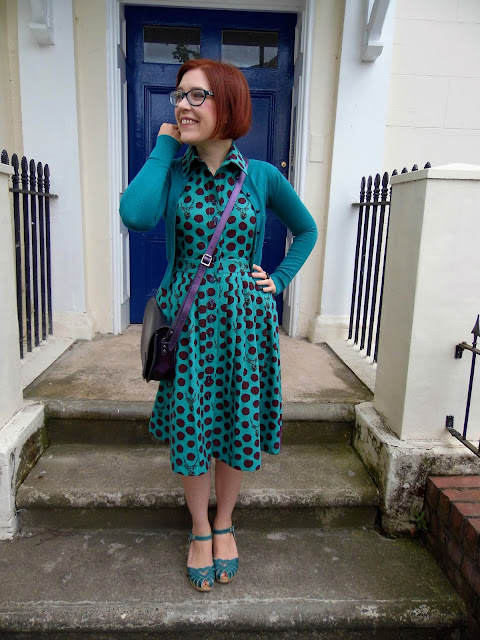 I have one of these Hell Bunny cardigans in teal now... and it seems they they also come in navy. Cardigan Rainbow! I wore this yesterday when I was feeling a bit delicate thanks to a horrible atmospheric pressure headache. Nic and I went out for a long walk to get some fresh air (and to go to Lidl to buy cinnamon buns) and then I spent the afternoon knitting. Basically every time Nic looked over in my direction he told me how much he loved my dress, so I'm calling this one a big success. You know I'm all about the compliments, yeah?

Thanks so much to Plush Addict for sending me this gorgeous fabric. I really couldn't love the finished dress more!

And, as I mentioned earlier, Plush Addict have also sent me something for you guys as well. I have a £25 voucher to give away to spend in their online store. The giveaway is open worldwide - Plush Addict ship internationally - and all you need to do is go and have a look on Plush Addict's site and leave me a comment to let me know what you would spend your £25 voucher on and what you would make with it. You can gain an extra entry by tweeting a link to this post - just make sure to mention me in the tweet so that I can see it! Please make sure that it's easy for me to find your contact email address in case you win.

Have fun browsing Plush Addict's massive selection. It genuinely took me ages to pick out the Kokka fabric - here are a few of the runners-up! 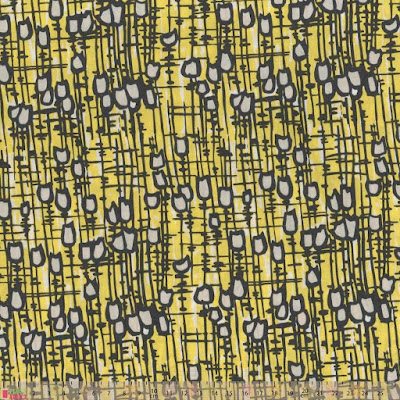 Makower yellow tulips poplin... this was also in the running to make a shirt-dress, but then almost every fabric is at the moment! 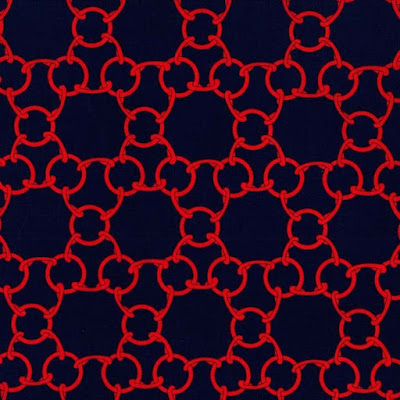 I love this Michael Miller chain link print cotton. For some reason it makes me think of The Crystal Maze! I think it would make a beautiful sun-dress. I'm pretty sure it's the fabric that Simplicity used for the sample dress on the envelope for the Cynthia Rowley Simplicity 1607, so you could do that with it! 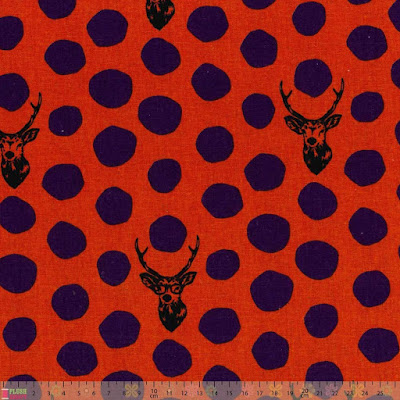 Because if I like it, I want it in every colour... the Kokka Echino stag fabric in orange and purple.

Right - good luck. May the odds be ever in your favour, or something. I must go now - I have plans that involve a cocktail and the last two episodes of Mad Men. Goodnight!