Bobby and me have decided. He's going to stick vegetables up his nose. He's not going to take over the family gas station.

Hello hello! Happy Heatwave to my British readers and just, you know, happy Wednesday afternoon to all the rest of you all. I'm currently hiding out in the flat. The lovely warm weather is good and all, but I have hay fever and the constant sneezing when I'm outside is doing my head in. Happy days!

Firstly - a massive thank you to all of you who entered the giveaway for Plush Addict. I expect they're feeling pretty loved! I put all your names into a spreadsheet (you know I love a spreadsheet) and chose a number with the random number generator. Mrs O - you're the winner! I will be in touch with details.

So anyway, that's the craic there. I'm grand here, hay fever notwithstanding. I had a bit of a mad end to the week last week at work and ended up working very late on Friday night and throughout Saturday morning. Such fun. Ugh. After I finished work on Friday night I poured myself a massive gin and tonic and lay on the sofa for a while before deciding that I needed to do some sewing to clear my head. In my gin-fuelled wisdom, I thought the best thing to do try out a whole new pattern - Cynthia Rowley for Simplicity 1801. 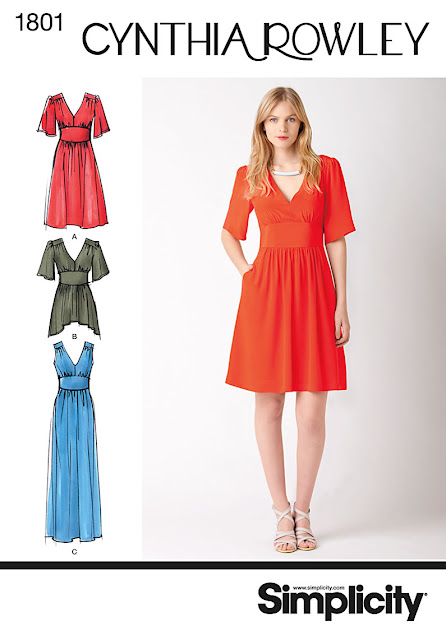 I'm honestly not really sure what possessed me to sew this, a little bit drunk and late at night. Earlier in the week I'd had a go at another Cynthia Rowley pattern - 1607 - which ended up being a total wadder. That particular pattern is currently on time out while I decide whether it's worth making the necessary adjustments. Anyway, mostly I find that Simplicity patterns fit me reasonably well out of the packet but I guess the Cynthia Rowley patterns are drafted from a different block or whatever - it's not so straightforward with these ones. So anyway, I sewed 1801 to the point where I needed to do some hand-sewing and hem it and tried it on, and hated it. In fairness, it was very late at night and I was a few gins in. When I tried it on again the following morning and realised it could potentially be saved with a small adjustment, I didn't feel quite as annoyed. I'm thinking of this as a wearable toile. Maybe. It might yet go in the bin. 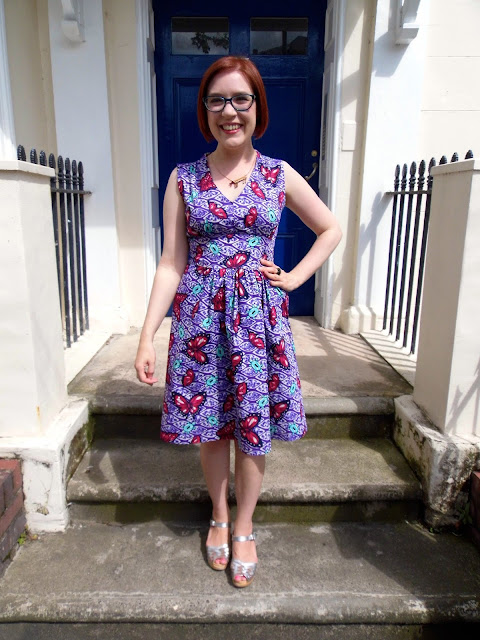 This dress certainly turned out a bit cuter than I thought it would but, yeah, I am still pretty unsure about it. You can't really see it in this print (I'll get to the print in a minute too) but I just don't think the wide, curved waistband really suits me. I have a pretty short torso and the waistband bisects it in a weird way! The bodice and waistband ended up being too long and the on-the-fly adjustment I made to fix this was to significantly shorten the shoulder yokes, which brought the whole thing up. I think that, if I am to make this pattern again, I will want to do that and decrease the width of the waistband slightly too. 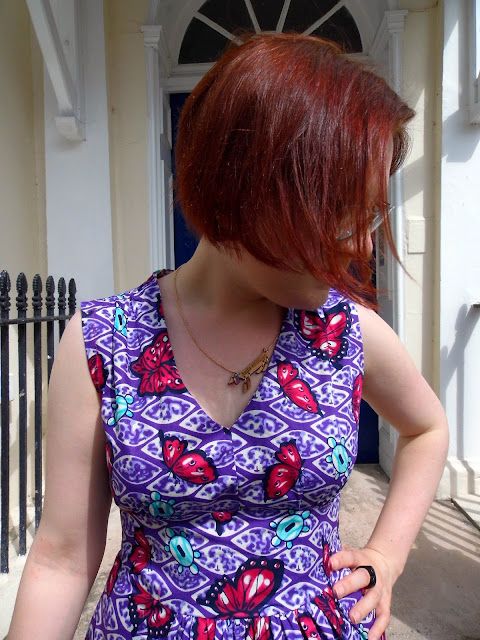 The combination of the wide, low waistband, the gathering AND the fact that I used a fairly weighty wax cotton means that there is a lot of room in the stomach area. I am definitely - very definitely - NOT pregnant, but this dress sort of makes me look like I am pregnant. In 1995. Because the fabric has a sort of 90s board shorts vibe to it, doesn't it? In the 90s, I wanted to be Clarissa but maybe I'm actually Sam: 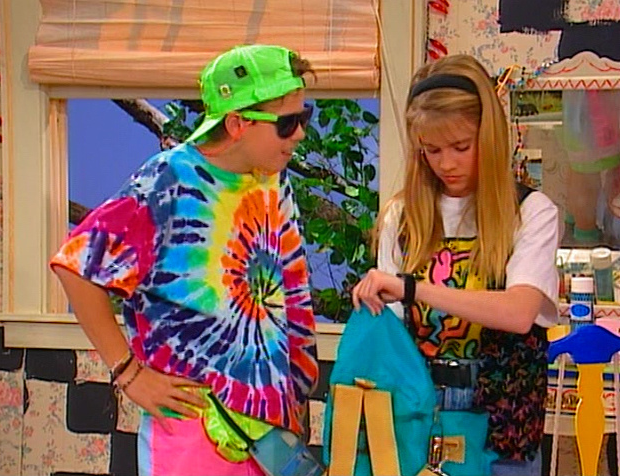 Actually I still kind of want to be Clarissa. I thought I was immune to the current 90s revival but maybe I'm wrong about that...

I bought the fabric on Goldhawk Road in January - I think it came from Fancy Fabrics - and Nic actually picked it out. He liked it so much that I also bought it in blue. So I have 5 metres of that kicking around too that I'll have to decide what to do with! I think that I do like the fabric, though, even if it is a bit 90s in the worst way. 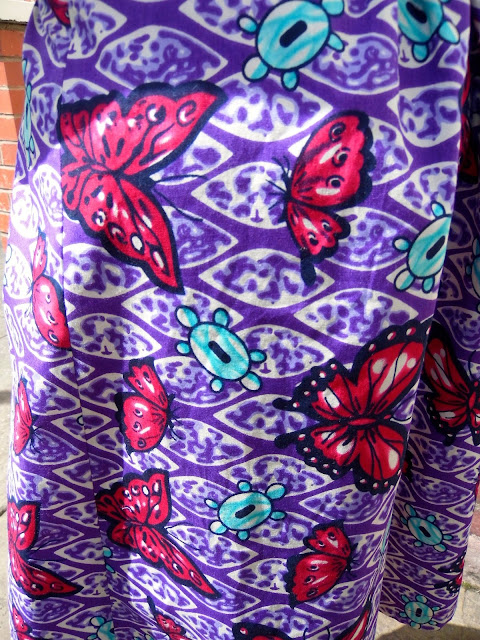 Nic still likes it and he really likes the finished dress. I wore it on Sunday and he kept telling me how much he liked it - partly, I think, because he didn't want me to put it in the bin! He thinks that I'm unsure about it because it's a bit different to my usual style and he might be right. I don't know. 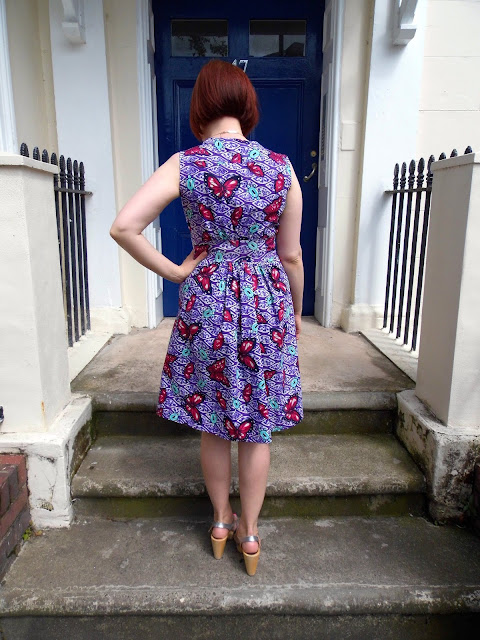 It's slightly more flattering from the back, maybe!

I did enjoy wearing this dress on Sunday. I think that if I can work out the fitting issues, it could be a good contender for a maxi dress pattern. I have some polka dot cotton lawn that would work well and in a softer, drapier fabric the whole preggo effect would be lessened as well. So I'll have to see.

It was very hot on Sunday and Nic and I had a very lazy morning and early afternoon. I had a bout of insomnia at the end of last week and over the weekend so, in an attempt to give me some energy and to tire me out for later that night, Nic and I took a spontaneous walk across the fields to the Saxon Mill. I tried to get some good photos in the barley fields but it was too windy and I looked like a dick in most of them. Ah well, it was still a lovely walk! 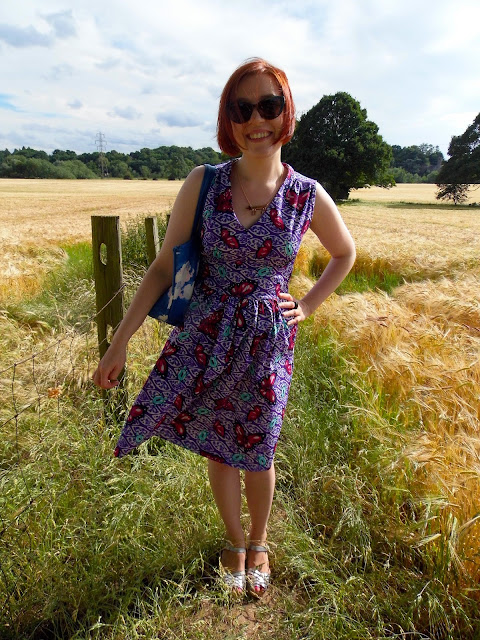 So, considering I made this dress while stressed, slightly drunk and in the middle of the night, it turned out all right! I still needed to do a little bit of relaxing sewing, though, so on Saturday afternoon I did as Karen described, and hit up a well-loved and familiar pattern. Look out for another Emery dress on the blog - at some point when it's not too hot to put on a close-fitting dress. Not that I'm complaining about the good weather. I love it. I bought two more pairs of sandals yesterday, which brings my total up to 13657 pairs of sandals. I'm ready for the good weather to stay on indefinitely. 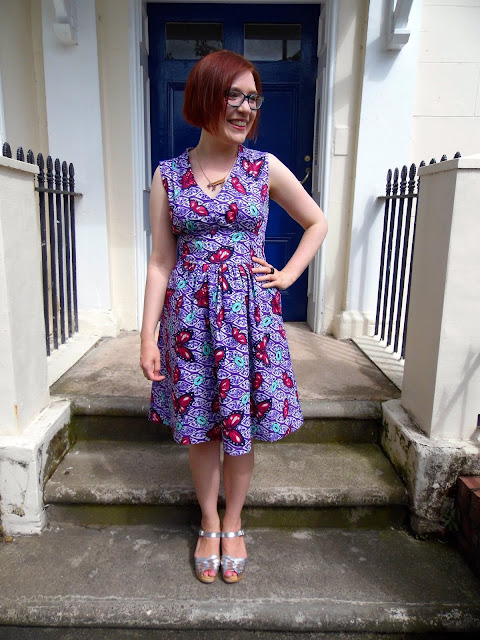 I'm also ready to eat enormous meals in this dress. It might not have to house a human baby but there's every possibility that it'll have to house a food baby at some point.

Speaking of enormous meals, I must draw this to a close so that I can go out and buy supplies for a picnic dinner in the park this evening. See you all later!