He drank a whole bottle of champagne out of one of my pumps. My charcoal pads filtered out most of the alcohol, but he still got tipsy enough to sing me a Chuck Mangione song.

Oh HELLO! I hope everyone is grand. I'm not too bad here, even though it's a) Monday and b) extremely dreary. Things aren't too bad, though. I worked at home today and Nic and I were able to go out for a walk at lunchtime and I found something awesome in the Myton Hospice shop... 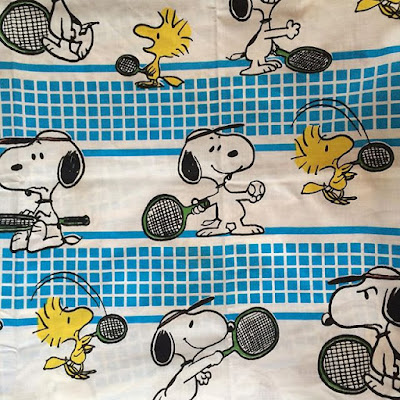 It's a tennis-themed Snoopy sheet. I thought I was mostly over novelty prints, but who am I kidding? I am going to have to make myself a little Snoopy dress. Maybe I'll even be able to wear it before the end of the tennis season. I don't often get lucky when it comes to finding fabric in charity shops, but this was pristine and too much fun to pass up. Also, I don't think Nic would have forgiven me if I had left it in the shop!

So that's the craic with me anyway. The fair is in town at the moment so on Friday night, I got to go on the waltzers a few times, and yesterday Nic and I went to Banbury with Rick and Lauren to do a town trail challenge thing. There was a genuine challenge element to it - it was a bit like a treasure hunt, but with no treasure - but it was also a good opportunity to check out some of Banbury's pubs while we dodged rain showers. It was a good day!

On Saturday (yeah, I'm jumping around in the timeline. I'm crazy like that) Nic and I dandered about town and I took the chance to get some photos of my most recent knitted garment. Having cut my knitting teeth on Andi Satterlund patterns and worsted or DK-weight yarn, I decided it was high time to move onto another designer and a finer yarn. My friend Charlotte recommended I try out some of the yarns from West Yorkshire Spinners, as she thought I would like their Signature 'Sweet Shop' range. She was right. I did. I had a tough time choosing - I really liked the 'blueberry bonbon' colour, but I thought a yellow cardigan would be more practical, so I bought three balls of butterscotch. The pattern I had in mind was the popular Audrey in Unst by Gudrun Johnston, as this is pretty much what I go for in shop-bought cardigans - cropped, and in bright colours. I was helped along by the fact that there are so many lovely Audrey in Unst cardigans out there in blog-land - most recently, Heather B knitted a totally gorgeous green one.

The pattern is designed for DK-weight yarn and what I had was 4-ply, but I wasn't worried by this. A quick cast around the internet showed me that lots of people had knitted it in sock yarn, so I cracked on ahead. I had to size down on my needles to get gauge but otherwise it was all good. I was taking a bit of a risk when it came to choosing a size, especially as this pattern is knitted from the bottom up, but the size small worked out fine. Anyway, enough yammering. Here's my cardigan! 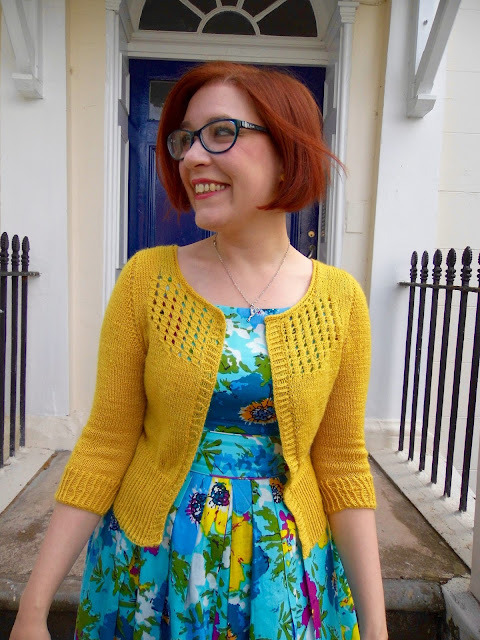 So, this cardigan is not so cropped on me. I just couldn't tell what the length was going to be like - well, I mean, I suppose I could from the schematics provided on the pattern - and this is a wee bit longer than I would normally like. However, I'm really happy with it. For one thing, I think cropping it too much would work against the lovely deep band of ribbing at the bottom. For another, I think it works with the way the fabric drapes. It's a bit outside of my standard fit-and-flare silhouette, but only a bit. It works with my dresses, and that's what's important!

Length aside, I love how this cardigan fits. I decided not to add buttons to this one because the yarn is so fine that it becomes a little bit see-through when pulled closed. I thought I'd never wear it buttoned-up, and didn't fancy sewing buttons on that would never see any use. It does fit buttoned-up though - as best as I can tell from pinning it - so the next one I knit will have buttons. 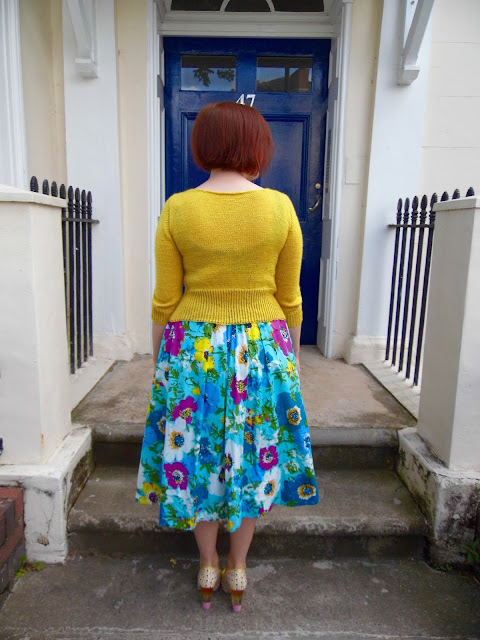 Here's the back - I actually really like the length through the back so I'm trying to focus on that instead of my shocking bread-back! Let's have a look at the front again instead... 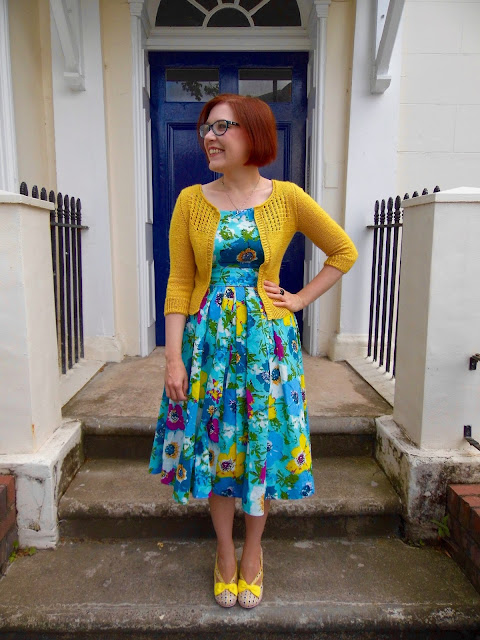 One of the great things about knitting this cardigan was learning a few techniques. So, as well as trying to keep my tension consistent across yards of stockinette in 4-ply yarn (something I still need to practise, yo) this was my first bottom-up cardigan. I also learned how to do a three-needle bind off (fiddly. as. fuck) and i-cord binding for the neckline. I wasn't sure how much I would like this and it was the one design aspect that was putting me off the cardigan, but on the completed cardigan I love it. I think it's really elegant and unusual, and it works so well with the pretty shetland lace on the bib. 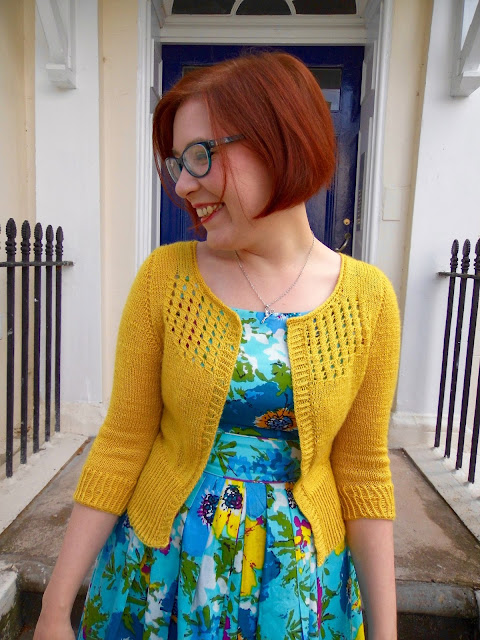 This picture is essentially identical to one above but I've put it in here because I've just been talking about the neckline. Isn't the neckline pretty, though?!

I thought that knitting this cardigan would take significantly longer than the cropped cardigans in heavier yarn that I learned on, but it didn't really. I had a couple of train journeys to knit it on, which helped I guess. The bit that took the longest was the twisted 1x1 rib, but you get it over with nice and early. Also, once I got into it, even that was kind of satisfying - although my poor old right shoulder didn't massively agree with that.

Since I finished this, I've cast on another Miette cardigan - I bought some pretty blue Cascade 220 superwash for one, as I've been wearing my Dilly cardigan loads. But after that I'm knitting another Audrey in Unst in some beautiful hot pink - really hot pink this time - 4-ply Merino yarn. Fuck yeah knitting!

Both of the cardigans I have lined up will also look great with the dress I'm wearing in this post, which is an Emily and Fin dress I bought a few weeks ago. I don't often buy dresses these days, but sometimes one comes along that is just impossible to resist, and this was one of them. 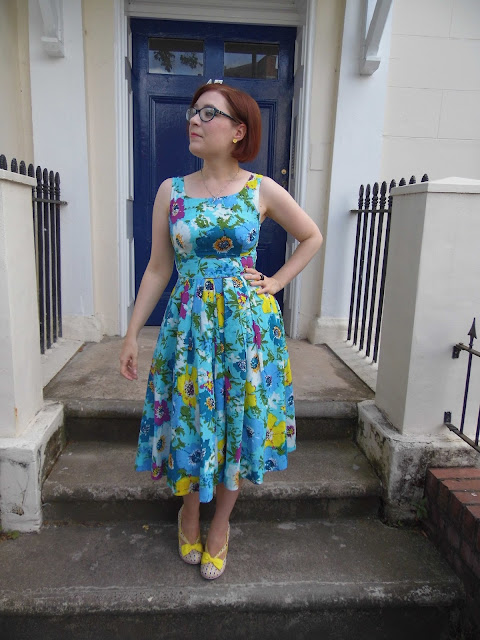 The style is called Isobel and obviously I fell in love with the bright floral print. One of the things I really like about Emily and Fin dresses is that they have pretty classic shapes but with interesting details. This one has sweet little pleats at the bust and a really interesting curved waistband. It made it totally worth buying, although I did wait until I found somewhere selling it at an el cheapo price. 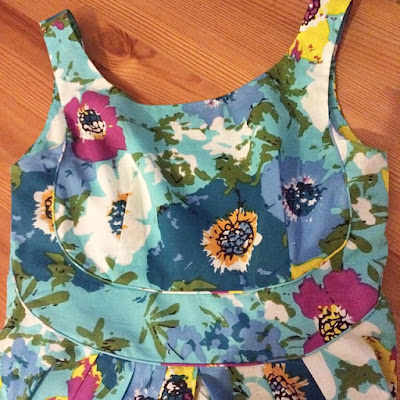 Anyway, that's all the craic I have this evening. I need to go and put some washing on - that Snoopy fabric needs to be pre-washed! Have a great week, everyone!