Oh, honey, you are not trash just because you grew up in a trailer and your mama's in prison.

HELLO! What's happening, folks? I've reached a happy end to a weird Monday - I had a bad case of the mean reds today for no reason that I can really articulate. It's weird when anxiety kicks off for no reason you can place - especially when life is otherwise good. I've been suffering from insomnia again and today I had all those other delightful symptoms - palpitations, an inability to eat, dizziness. Lucikily, I was working from home, so I was able to take it relatively easy. I'm feeling a lot chirpier now - when I finished work for the day, I spent some time finishing a dress and then Nic came home and we went out for a walk and a few drinks. When life gets like this it can be nice to have something to pull me out of it, you know?

And it's self-indulgent really because life is pretty good and I've just had a really lovely weekend. One of my big work projects hit a major milestone over the weekend, which means I can go off on holiday soon in good conscience. Amy came to visit on Friday night and we went to a gin festival hosted by Leamington Wine Company with a lovely group of friends. You might know that I'm a big fan of gin, and I have been somewhat enabled in this by Leamington Wine Company. Over the last year I've been going in on payday or thereabouts every month and buying a fancy bottle of gin - usually after a long conversation with the staff and numerous samples. When they announced they were going to be running a mini gin festival I was very excited and the night did not disappoint. We were joined by Rick and Lauren and, as well as the chance to sample a number of gins, we had dinner and entertainment provided by a DJ who thought it was a good idea to play a set that was composed of Blue Velvet, Moon River and Blue Moon - in that order, even though Blue Velvet/Blue Moon/Moon River would have made more sense!

I somehow dodged a hangover the next day - I seriously have no idea how - and we set off for a day of fabric shopping in Birmingham with Marie, Kat and Helen. I managed to go quietly wild and ended up buying a LOT of fabric and doing a lot of gossiping. Most of it is awaiting pre-washing but one piece skipped the queue - it's some Hill-Berg cotton poplin that I bought from Fancy Silk Stores (the lovely owner said to me how nice it was to see us all - "You ladies, you're always so happy") so I took a calculated risk and dodged pre-washing it to make this... 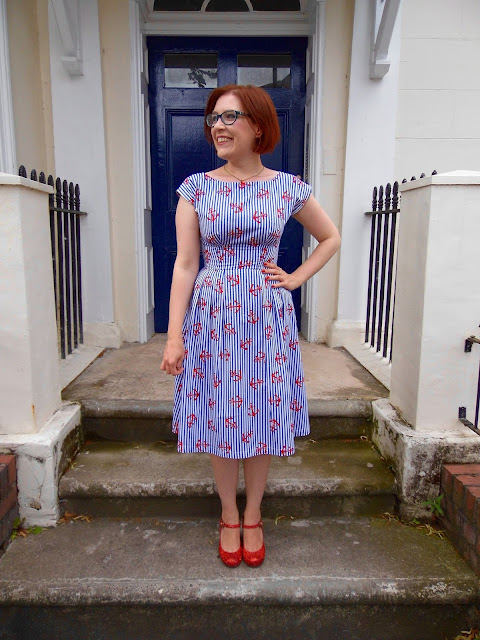 I bought this fabric in Fancy Silk Stores. I was on my way to the back of the shop to have some beautiful Liberty lawn cut (£11.99 a metre SAY WHAT) and I spotted this. I actually bought this exact fabric over a year ago after I saw this dress: 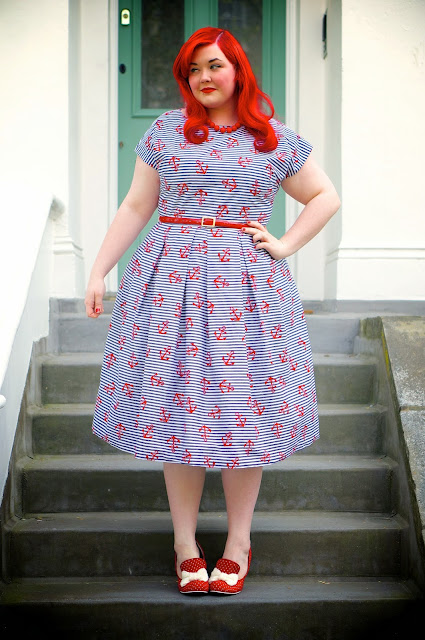 STOP THE BUS. Isn't this jaw-droppingly fabulous?! Now, in my defence, my dress is not as much of a straight-up shameless copy of Melody's dress as it might seem. She made this dress last year as part of Sew Dolly Clackett... so really my dress is a weird telescoping. Like, the human centipede of sewing blogging, only less disgusting? I don't know. Anyway - I saw some of this gorgeous fabric last summer on Goldhawk Road and bought it so that I could make a Melody-inspired dress but then I washed it with some navy cotton and the colour ran and it was ruined. RUINED. It's been sitting in the bottom of my fabric stash box ever since because I was too sentimental to get rid of it. I'm glad to be reunited with it. 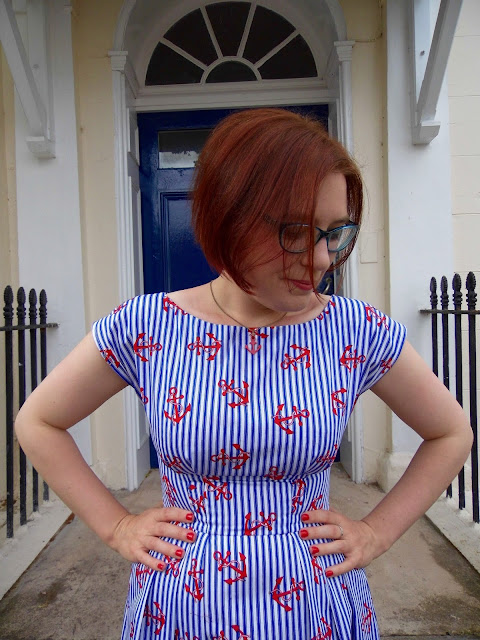 I wore it with my Tatty Devine anchor necklace, which I bought when I was in Liverpool in March. It's kind of like anchor camouflage on this print! I also wore these nautical earrings... 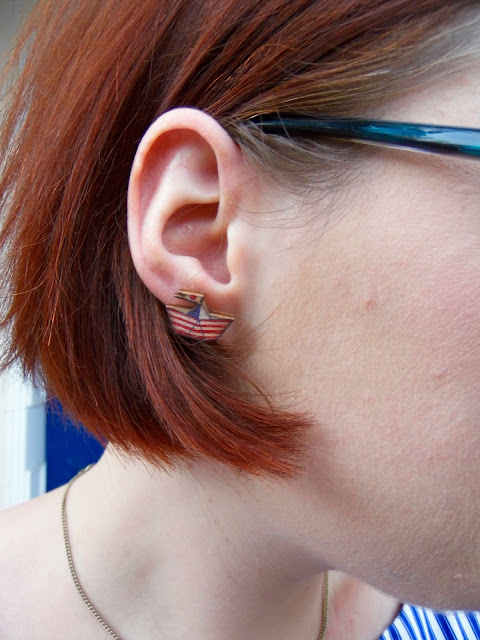 They're little paper boats, and they're by Punky Pins! I got very dressed up for going to the pub, but in my defence, I'd been in the house on my own feeling rotten all day. This cheered me up. Also this is a reminder that I need to hit the henna because hello grey hair. 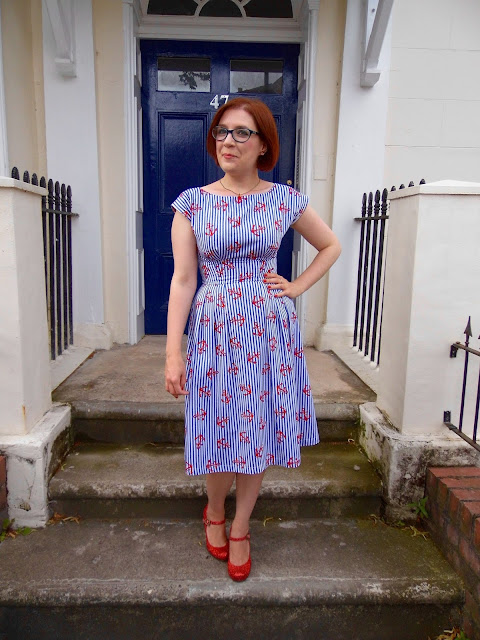 The only other change I made to the pattern was to scoop the front neckline out a bit. I didn't want to sew the v-necked version because it didn't seem right with the stripes on the print, but I thought the slash neckline as drafted wouldn't work either. It's a minor change, but I like it. It shows off a bit of collarbone and no bra straps. To me, that's a winner. Nic's a fan too, which is always good.

This dress is pretty fitted, which is fine by me. I usually like my dresses with a minimal amount of ease around the waist because it works with the silhouette I like. It's not to everyone's taste and I must confess to daydreaming recently about trying new things. I can't get the the Xerea dress by Pauline Alice out of my head and I think it could make a very cute alternative silhouette for a summery nautical-inspired dress.

Anyway, that's the craic with this dress. It was pretty grey all day and I managed to catch a brief moment of daylight in which to take a few photos. It started to rain just as we were finishing... 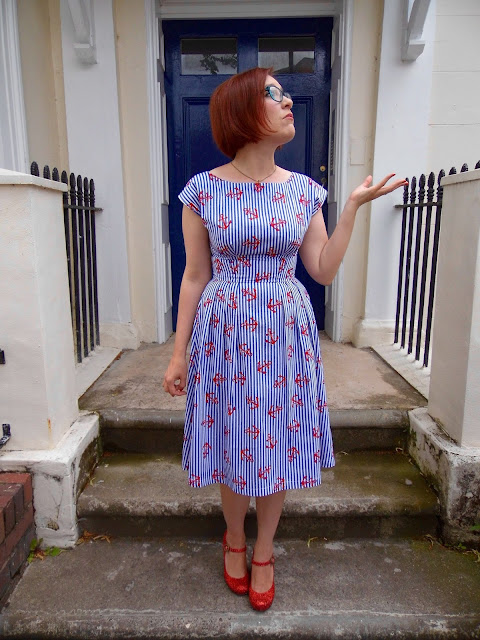 ARE YOU FUCKING SERIOUS WITH THIS

By the time we got to the pub, the rain was blowing sideways. July! Still, it gave us an excuse to stay for an extra drink. Now I'm in my pyjamas and getting ready to watch an episode of The X-Files. I'm thinking some Scully side-eye will shake me out of my funk. Night, all!