There’s something missing, something wrong. It’s like a pretty girl with short hair.

Hello everyone! Happy Monday my loves! I hope everyone has had a lovely, lovely weekend. I'm a teeny bit - a teeny tiny bit - hungover after a weekend of (relative) excess. It was nice, actually. Since I had that alcohol poisoning at Christmas, I have found it difficult to ever drink more than a few drinks at a time. That's still the case, actually, but over the weekend I found the sweet spot where I could feel pleasantly tipsy without freaking out about being drunk, and that was nice.

I had to work over the weekend which was annoying (especially when it meant dealing with rude and condescending emails) but otherwise, it was perfect. I had Friday afternoon off, which I spent in the sunshine with Nic. I sewed a toile of a dress I wanted to make and prepped my pattern pieces, and I got down to sewing on Saturday morning. By Saturday afternoon I had a new dress to wear for a walk in the countryside with friends. Don't you love it when that happens?!

The pattern in question is the Sew Over It vintage shirt-dress, which I bought last week. While I was buying the pattern in their online store, I also strayed over to their fabrics section and bought a couple of metres of their anchor print chambray. I'd seen some buttons with anchors on in a local haberdashery - in fact, every time I've gone in over the last few months I've tried to find an excuse to buy them - and I finally found my reason! 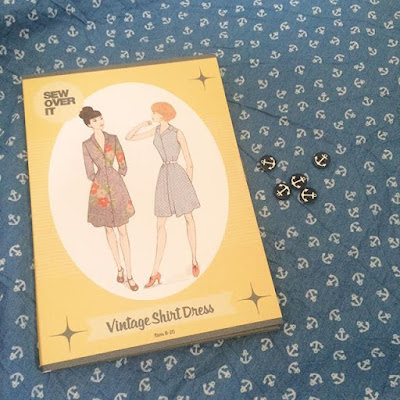 This summer has sort of unofficially become the Summer of Shirt-dresses, given my ever-increasing love of McCalls 6696. I was charmed by the look of this dress, though - I was lucky enough to have had a preview of it, having seen Emmie's test version in person when we went to Fashion on the Ration exhibition at the IWM in April. I knew then that I needed to add this to my wardrobe. The anchor fabric was just a happy coincidence. You know that in the summer, I am constantly looking for ways to emulate my hero, Mayor Larry Vaughn: 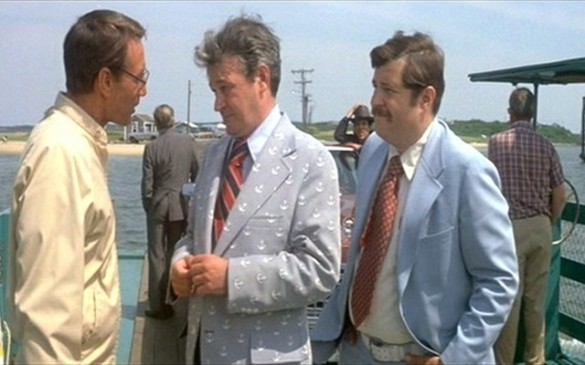 I might never actually get around to making myself an anchor print blazer because, realistically, I might never wear it. I haven't got the same pizazz as old Larry here. A shirt-dress seemed like the next best thing.

Going by the finished garment measurements on the back of the pattern envelope, it was looking like I'd need to sew a size 8, but I wanted to toile it to get an idea of ease. It turns out that there is a fair amount of ease built in around the waist - fairly standard with shirt-dresses, I'd say - and I needed to take it in by around an inch overall at the waist. I did this at the side seams but I'm curious to see if it would work better by increasing the size of the pleats.

I had set aside Saturday and Sunday morning to sew this dress but ended up whizzing through it very quickly on Saturday morning, which was a very pleasant surprise. I was able to wear it that afternoon! The instructions are very thorough and I stuck very closely to them, which made sewing the notched collar a breeze. I've been lucky enough to work with Lisa and her team at the John Lewis 150 day last year and I know how knowledgable and thorough they are and this is fully reflected in the quality of the pattern instructions and the drafting. This was an absolute pleasure to sew and I'm already looking forward to sewing another one! 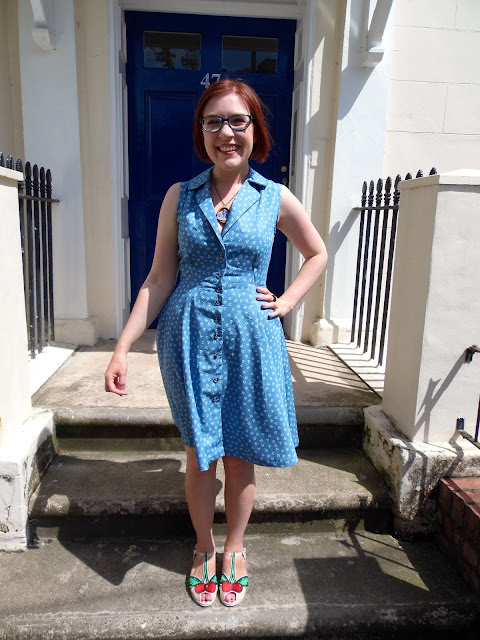 The pattern calls for eight buttons but I bought ten, and I think I could have even done with twelve, to be honest. This is personal preference more than anything else, I think, but I would like to have added a couple more buttons towards the bottom of the skirt. Maybe this is also because I think the anchor buttons are the actual bomb. I'm going to go back and buy more to put onto a cardigan. They come in red as well. ONE IN EVERY COLOUR, LADS. 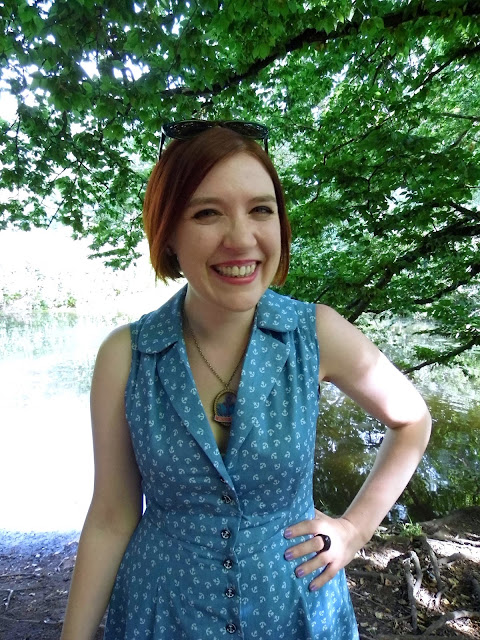 Here's my sunshine and prosecco-fuelled crazy face. We had friends with us when Nic was taking these photos so I felt a little bit self-conscious - sorry there are not closer-up photos of the buttons!

There are so many things I really like about this pattern. The notched collar is very sweet and I love the shape of the neckline. This is a pretty short and sweet summer dress so it's a little bit low-cut. When I make another one, I will have the first button a little bit higher up to preserve my modesty! I love the shape of the skirt and the way the pleats on the bodice and on the skirt create a subtle and interesting shaping. It's a really beautiful design - as is the way the shoulder seams curve to the front and join with a gently gathered seam. It's lovely! 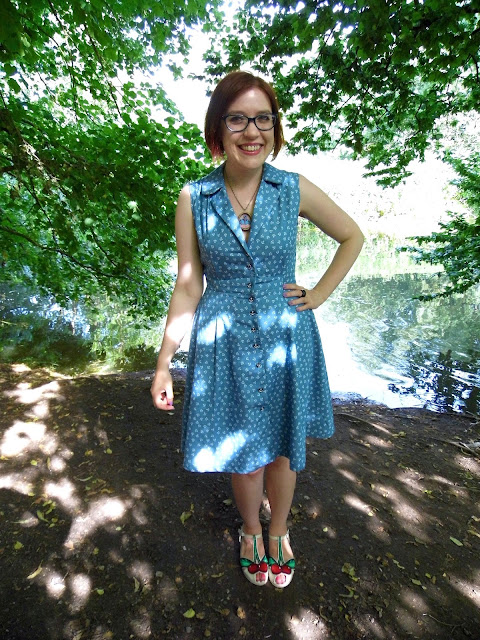 The skirt hits me just above my knee, which is a really good length for a summer dress. My preference is usually for a longer hem but, you know, getting the knees out the odd time is fine too! I didn't manage to get any photos of the back, but the bodice fits me very well across the lower back - I usually need to shorten bodices somehow, but that wasn't the case here. The waist seam sits at my rather high natural waist, so this is something you might want to watch if you're sewing this dress for yourself.

Following on from my last post, there's something about the chambray that makes this dress feel quite 90s as well. Maybe I just have the 90s on my mind a lot at the moment - Nic and I watched two series of My Mad Fat Diary very quickly so we could watch the final episodes as they are broadcast, so I've been listening to a lot of 90s indie! Still, I guess the 90s are officially 'vintage' now, so maybe it still fits. In any case - I love this dress! 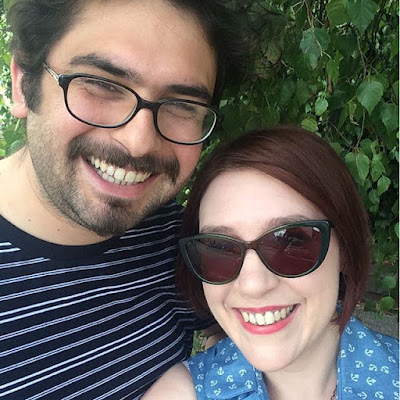 Nic has been updating his summer wardrobe and he bought this stripy t-shirt the other day. While we were waiting outside the flat for our friends to arrive, he said to me, "I look like I work on the boat you're the captain of!" Our matching outfits were accidental, but pleasing all the same.

Anyway, that's my Sew Over It shirt-dress. I'll definitely make more. I'd like to make one with sleeves and with a slightly longer skirt for when the weather is cooler. I think I'd like a polka dot one - maybe in navy - but I'll wait to see what fabric speaks to me. In the meantime, I'm going to be finding every available opportunity to wear this one. I'm nowhere near the sea, but I do have a river nearby... 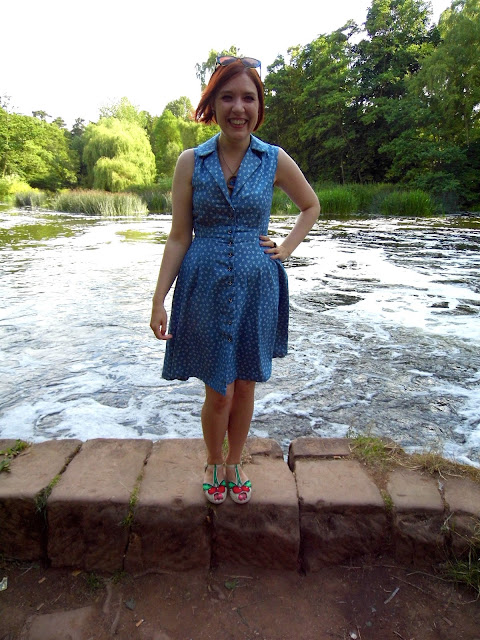 I was warned, "If you fall in that river, I'm not going in after you" which, fair enough. I didn't stay up on that wall for long!

I did this, instead: 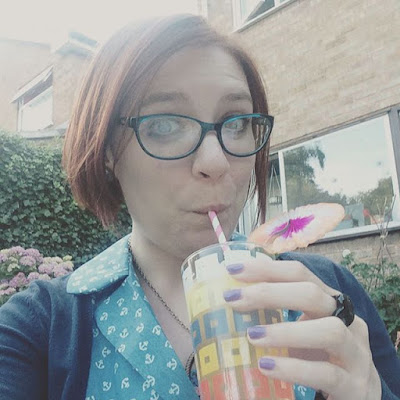 It was a good weekend. I earned this little hangover, I did. But now I need to go and medicate it with lunch and coffee, so I'll catch you all later. Bye!
Posted by Roisin Muldoon