All the professional actors write their lines on each other's clothes. The longer the play, the bigger the shirt!

Hello! How's Sunday treating everyone? I'm not too bad - a little tired out after a very sociable weekend. Nic and I ended up spending nine hours in the pub with friends yesterday. It was brilliant - one of those times when you sit down for a drink and a chat and the next thing you know, you're in the middle of a lock-in and the landlord is giving you free tequila shots to acknowledge your longevity. You know. One of those. Nic and I are off on holiday soon though, so I'll have time to recuperate!

I had a weirdly stressful and annoying few weeks at work. I'm having some issues with a more senior colleague who is going out of her way to be negative and critical of everything I'm doing at the moment and it's been pretty exhausting and occasionally quite upsetting. I'm not massively helping matters by pushing back in a pretty sharp way when I think a line has been crossed: I could probably find a more diplomatic way to deal with it, but at the same time it's hard when you're the more junior person in the exchange. I have two weeks off work now and I'm looking forward to having that time to regroup and I'll hopefully return feeling far less annoyed, and better able to deal with it! I hope that it won't become a big problem, but I have let a trusted colleague know how I've been feeling and she's been watching it out for it too.

Anyway. I'm on holiday now. Yay! And I've been dealing with work stress by knitting, sewing, watching 90s TV and drinking gin. I think I have fairly good coping strategies. I've had a productive week - I finished a cardigan and sewed two dresses. Boom! I sewed one of them yesterday morning and, when I finished it, I put it straight on and wore it to the pub. I sort of love it when that happens.

The dress in question is a bit of a departure for me. In my last post, I mentioned that I had been considering buying the Xerea dress by Pauline Alice. I've done a bit of pattern testing for Pauline in the past and I really love her designs, even though most of them are outside of my usual style. Something about the Xerea dress really appealed to me though, so I was really delighted when Pauline offered to send me the pattern. It arrived on Friday morning and by lunchtime on Saturday, I had a new dress! 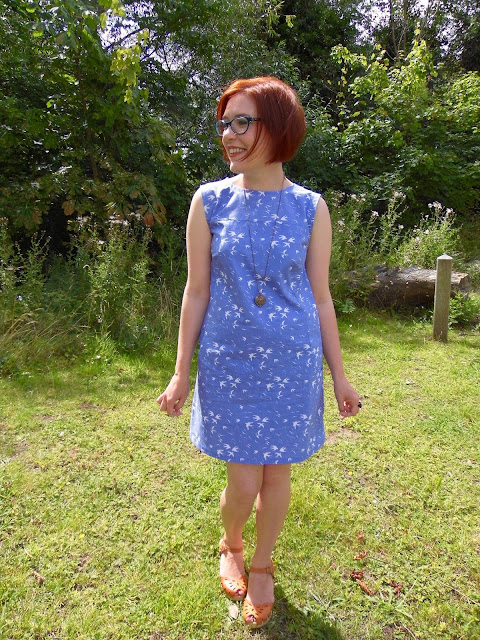 I bought this fabric when Nic and I were on honeymoon in Paris last year. It's cotton poplin and I bought 1.5m of it from Dreyfus. I didn't have anything in particular in mind for it and I didn't totally love it, so I thought it would be good for a wearable toile of this dress. Just prior to hemming the dress, I tried it on and thought that I looked like I was wearing a pillowcase, and I think that's at least partly due to the colour and the print of this fabric. Nic told me to hem it and see what I thought, and after I did that, I liked it a lot better. I think it still sort of looks like I'm wearing a pillowcase, but also that it's fine. 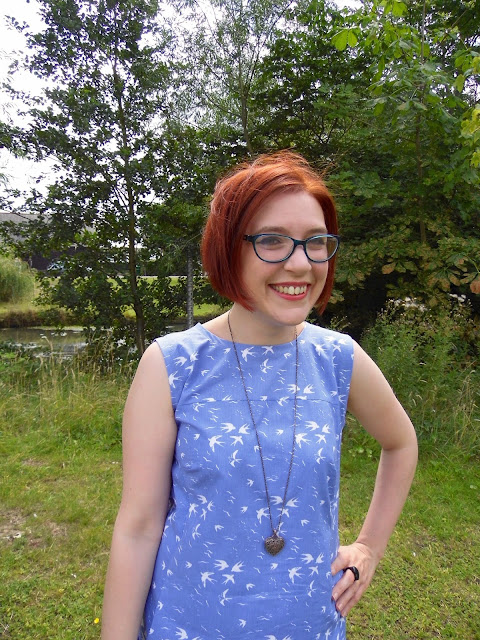 I sewed view A, which is more of a shift-dress shape than view B (which is described as a 'tent dress'.) I love the look of view B, but didn't have enough fabric. I only really had enough fabric for view A by omitting the sleeves. To be honest, I don't think I'd like sleeves on this dress made from this fabric - I'd look like I was wearing hospital scrubs. One of the issues I have with this dress, though, is the armhole area. There is a bit too much ease there without the sleeves and, if I make this sleeveless again, I'll redraw the armholes to remove that. I'll also lower the front neckline a bit, although I'm happy with the back neckline. 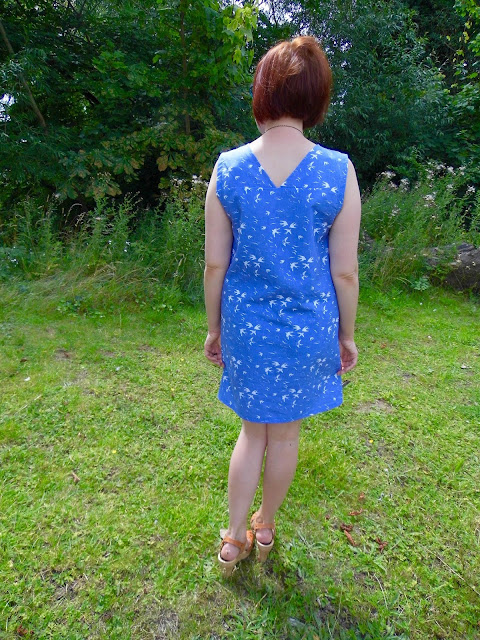 Again - I think it will look better from the back with a little bit more shaping around the armholes. It's a wee bit sack-like, but I'm honestly not massively bothered by that.

It's a bit weird to get used to looking at myself in a dress that isn't at all form-fitting. It's sort of why - fitting issues aside - I wasn't sure if I liked it when I put it on. This isn't anything to do with the pattern, which is great, but rather that I'm such a creature of habit that moving even slightly out of my comfort zone feels very strange! Do you know what, though? This dress isn't perfect, but I kind of love it. I felt fabulous in it all day! 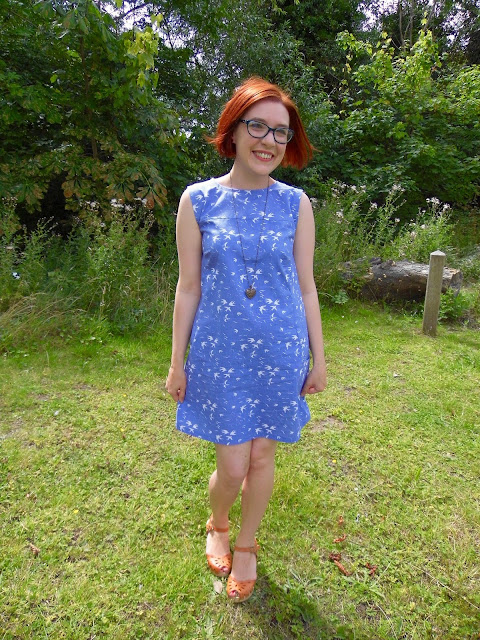 This is at least partly because Nic liked the dress so much, but it's also because it was cool and comfortable, and I liked wearing something (admittedly, only a bit) different.

The detail of this pattern are kind of lost in the print, here. The front of the dress has two side panels with front pockets, and it's a really sweet detail. I'd like to make this dress again in a more graphic print that would show this detail off. I'm also really looking forward to trying the tent dress version, and I think that both would work in slightly heavier fabric to wear in winter with boots. This dress is kind of what I hoped that the Francoise dress would be, but with more easily solvable fitting issues. Hurrah!

This dress was very quick to sew. It's not lined, and the armholes and neckline are finished with bias-binding. There are no closures. The instructions were brief and to the point, but very clear and helpful. I think that Pauline is a really interesting designer and I love that she is doing something a bit different and that the quality of the drafting and instructions in her patterns is very high. 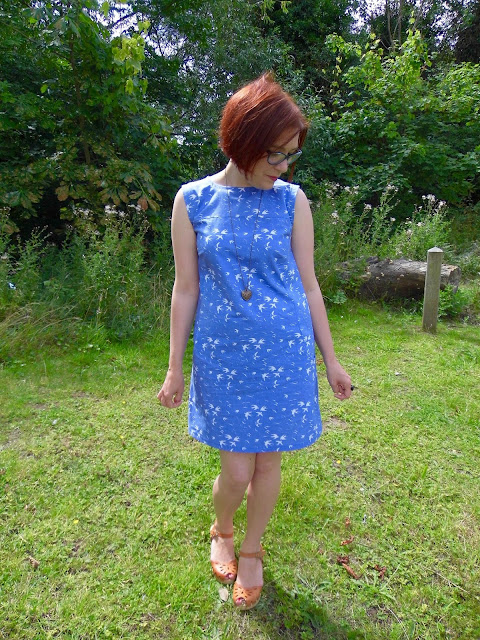 I've already ironed and packed this dress to take on holiday. The five-day forecast for Paris is looking like it's going to be pretty hot, so this will be a great dress to wear on one of those hot days.

Anyway. That's the craic there. Something a wee bit different! Now I need to get back to those pre-holiday chores of ironing and packing. See you on the other side!

*Disclosure: Pauline Alice sent me the Xerea dress pattern. I wasn't asked to review it or to do anything in exchange for receiving it. Thank you, Pauline!
Posted by Roisin Muldoon