Ooh, 'sofa'. Somebody got all flouncy when I wasn't looking. What are you going to do, put on galoshes and eat fruit like a Frenchman?

Hello lads, what's happening? It's been a while, but I was on holiday and then I was not on holiday. I'm back now though. Being back isn't all that bad - it's weirdly nice to come back to normal life - but we had a bit of a nightmare when we got back because we had some bathroom-related drama. While we were away the plumber came to investigate a leak into the flat below. The estate agents let us know he would be coming, but we came back to find he had 'fixed' the unreliable flush on our toilet. Instead of intermittently not flushing it now flushed, but the cistern constantly emptied itself. He also ripped up the skirting boards behind the toilet and left a hole in our floor. A hole big enough to see light from the flat downstairs. Oh also, he left all of the broken skirting boards and bits of wood and old nails on the bathroom floor, but he had lots of room to do this because he had piled everything else in our bathroom into the bath. And then I guess he went to the pub, or something. The worst thing is that the girl in the flat below us - the one who almost set fire to our whole building in March - well, she smokes very heavily and the hole in her ceiling/our floor meant that our bathroom and most of the flat absolutely stank of smoke. Like, you could see the smoke in the air in the bathroom. Our lovely flat smelled like a train station toilet.

It's mostly fixed now - the toilet flushes and the girl downstairs has been told by the estate agents not to smoke (it's a non-smoking building) and the hole has been temporarily filled in. But it was pretty depressing to come home after a lovely holiday only to have to spend the first few hours back at home with my hand in the cistern trying to fix the toilet. GRRR!

But back to happy thoughts. We had a brilliant holiday. Paris is just as lovely in August as it has been all the other times we'd visited. I'd been treated to some hyperbole in various travel books about how Paris basically completely shuts down in August, but this wasn't the case at all. It's true that lots of shops and restaurants were closed. We couldn't go and listen to jazz at Autour de Midi, for example, and the place that does the amazing vegetarian bobun was closed because they were extending it. But mostly everything we wanted to do was open for business. So were the fabric shops. Hurrah! We stayed on rue de Clignancourt, in Montmartre. Our flat, which Nic found for us on Airbnb, was incredible. It was on the top floor of a building set way back from the street and it was spacious and light and incredibly chic. It was the perfect base for a relaxing holiday of sitting at cafes, exploring and, of course, fabric shopping! 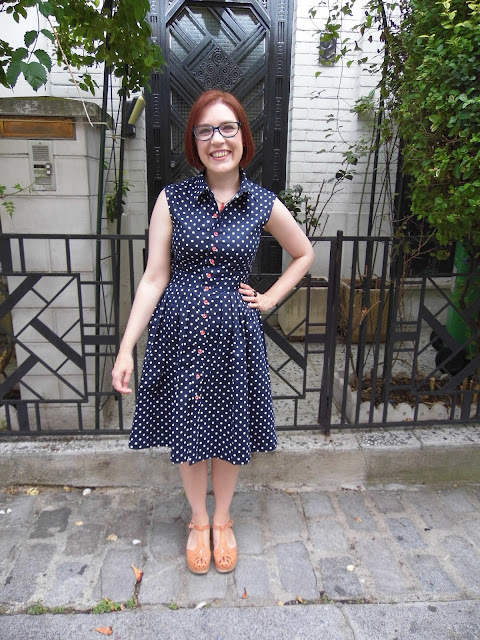 Yeah basically nothing more to say about this dress, so let's talk about the fabric. I sewed this with some lovely cotton sateen from Barry's in Birmingham, and the buttons are from a local haberdashery. The sateen has a slight stretch to it and it's really good to work with. I wish they'd had it in more colours, but maybe I'll go back and investigate what else they have the next time I'm in Birmingham. 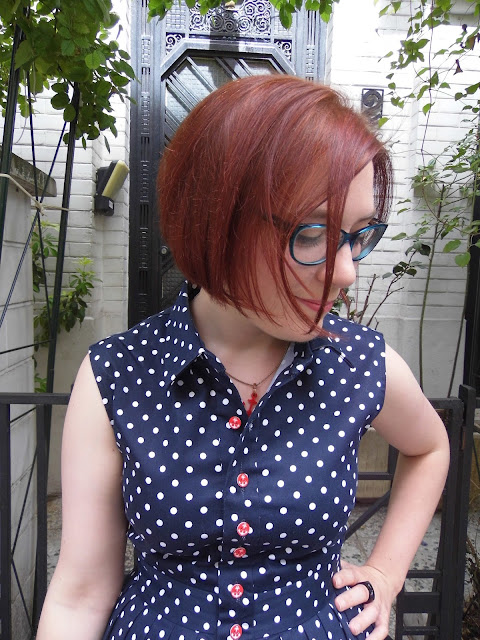 Obviously the star is kind of the buttons, which are the same as the ones I sewed onto the Larry Vaughn dress (and also onto a cardigan I haven't blogged about yet) I have a lot of patience for repetition. You might not have noticed that yet, like, but that's the case. I did have a wobbly moment just before I sewed the buttonholes, when I wondered if I should use some hot pink buttons that I have in my stash instead. The struggle is real, you guys. But anchors it was and, while it's pretty fucking twee... well, so am I. I like it. 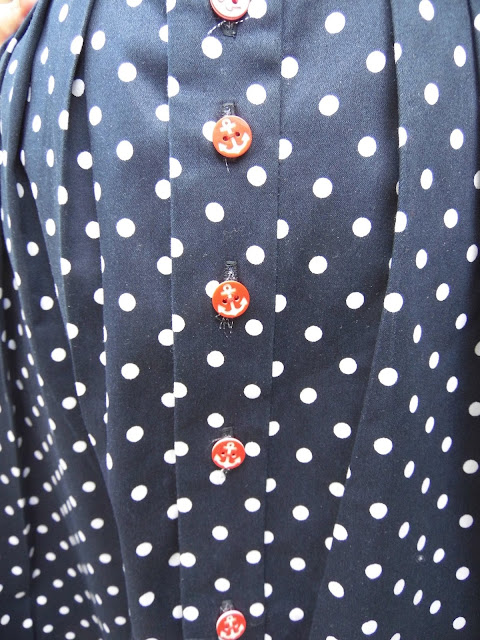 Here's an over-exposed close up. Buttons!

I'm really happy with this dress. I think it looks fab from the front and I felt great in it the whole day I wore it. The only slight criticism I have is the one thing I'm still not totally sure how to fix on this dress, which is a little bit of excess fabric across the back. I'm kind of loath to over-fit this though, as it is meant to be a bit more relaxed. If I remind myself to stand up straight, I don't look like too much of a hunchback. 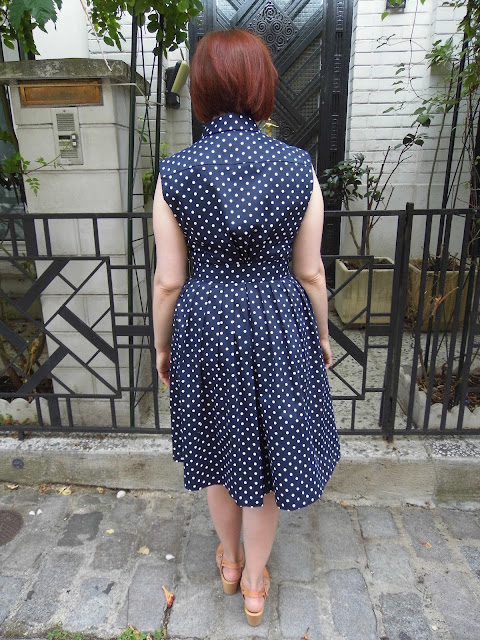 I think I still need to take a bit of width out of of the lower back. Maybe. I think it looks grand, all the same.

We had good craic the day I wore this dress. It was on the Monday of our second week in Paris and, after having been closed the whole week previously, my favourite fabric shop (the branch of Toto on rue de Clignancourt) opened and I did some fabric shopping. Nic and I pottered around Montmartre and bought a few presents, and then we went for lunch on rue Paul Albert. We had couscous at a little restaurant at the top of the steps that lead down to rue Andre del Sarte, and the owner gave me a little Eiffel Tower keyring as a gift! It was only a little thing but it made me very emotional, because it was so kind. I have heard so many people say that the waiters or the people who work in shops in Paris are rude, but this has never been my experience. 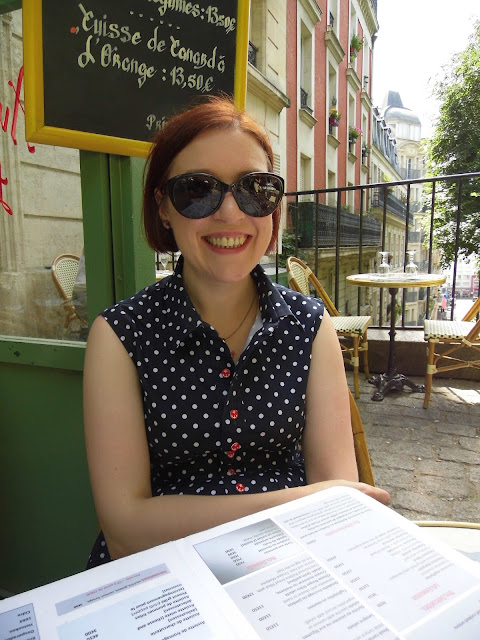 Being a flâneur was the object of the holiday, and I'm proud to say we achieved this aim handsomely.

There's really not a lot more to say about this dress. As with the Where I Come From dress, the collar worked very well in the slightly weightier fabric. I used correspondingly weighty interfacing on the waistband, the button bands and the collar, and it gives this dress a lovely crisp finish which I'm very proud of. My machine had no bother with the buttonholes either, although I made sure to test them on a swatch that replicated the thickness of the button bands. I didn't sew a buttonhole or a button onto the collar stand, though.

So, yay dress! And I know I said above that I wouldn't bore you with too many holiday photos but, eh. I lied. I'm going to give you a couple and then I'm going to peace out and watch an episode of Murder One, because Daniel Benzali's burning rage is really cracking me up at the minute. It's making me feel better about the fact that I totally wigged out about the bathroom shenanigans that I described above. 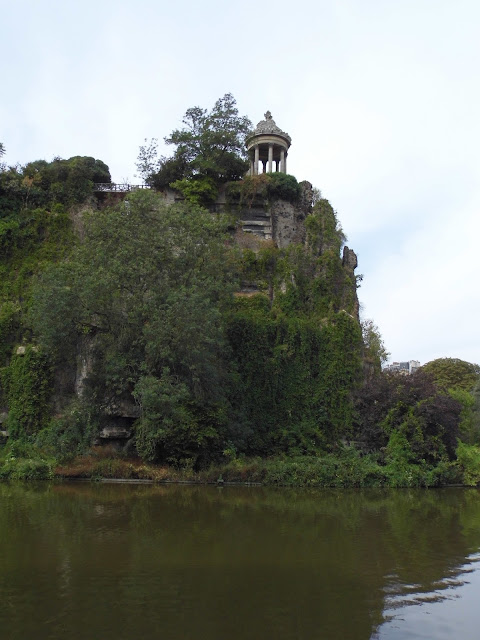 We went to Belleville and Ménilmontant on the Saturday of our stay, and we both really loved the Parc des Buttes-Chaumont. Unfortunately, we weren't able to get up on top of this little cliff thing to the Temple de la Sibylle as it was all closed off for repairs. The landscape of the park is completely stunning and we had such a lovely time walking around it. 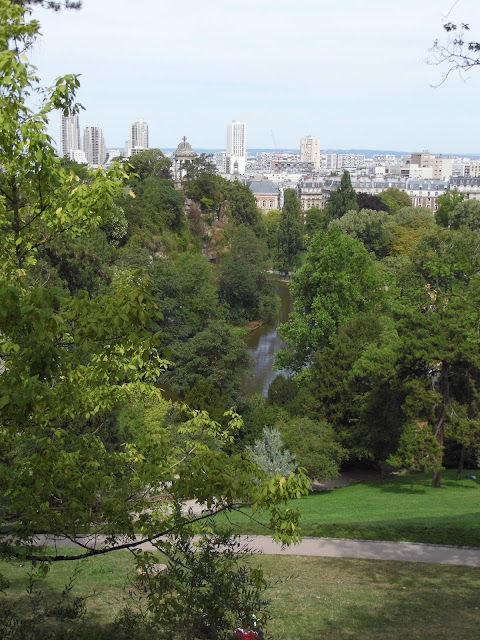 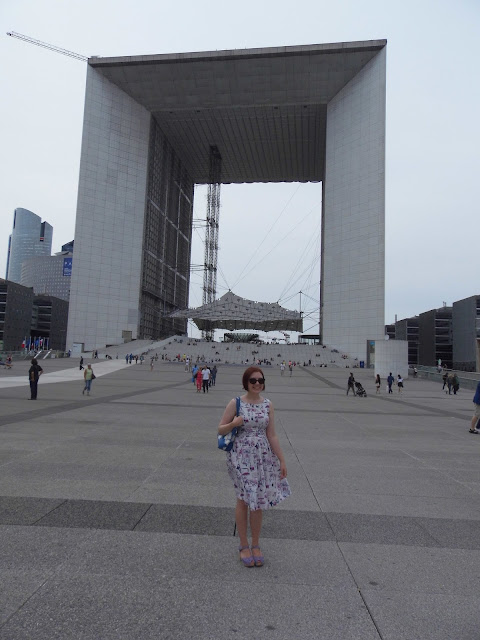 The same day, we went to La Défense. I've always wanted to the the Grande Arche in real life and I'm so glad that I did, because it was pretty fucking surreal. As it was a Saturday, the esplanade was pretty empty because the offices were closed, which just heightened the effect. This would be a great place to film some kind of post-apocalyptic film. It was a little overwhelming to stand at the top of the steps  into the arch and see the whole way to the Arc de Triomphe (which is, to my shame, another landmark I have yet to see in real life. Maybe next year.) 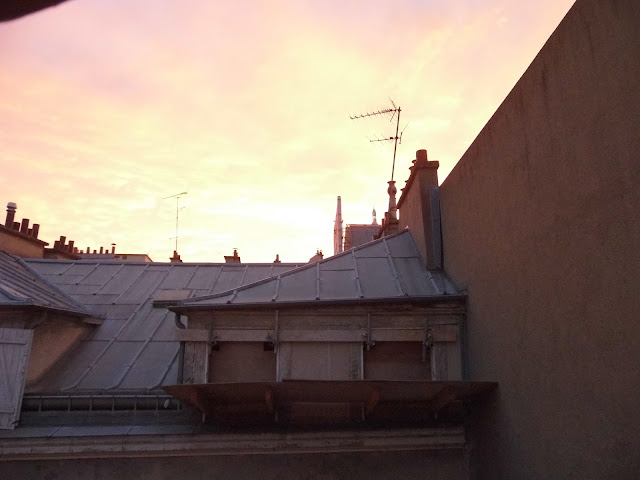 We really put the strolling into being flâneurs. Even on days when we didn't plan to go very far, the pedometer on my phone clocked up eight or nine miles, so there were a few evenings when we were just too tired to go out. Nic took this photo of the sunset seen from the kitchen window of our apartment. You can just see the very top of the Sacre-Coeur between the chimney pots on the right of the picture. 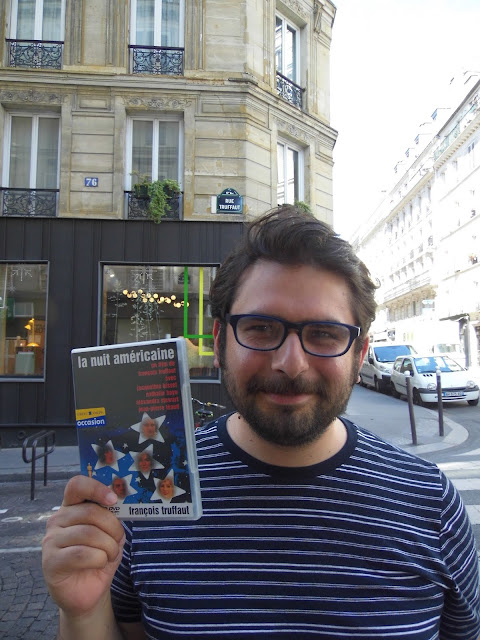 On one of the days we wandered down through Pigalle and into Batignolles, in the 17th arrondissement. It's a really beautiful area and it always takes me by surprise the way the different arrondissements look and feel so different, yet still have that architecture that is so common across Paris. All we did was to stroll the streets and have a drink in a cafe in a little square. We chatted for a long time about François Truffaut, as I had just bought Nic this copy of La Nuit Américaine in Gilbert Joseph. As we walked back towards Montmartre, we turned onto rue Truffaut. Truffaut was born in the 17th, but it turns out this street wasn't named after him. It was still a nice co-incidence! Actually, there is a rue François Truffaut in the 12th arrondissement, near the Cinémathèque, and it's not nearly as picturesque as this one. 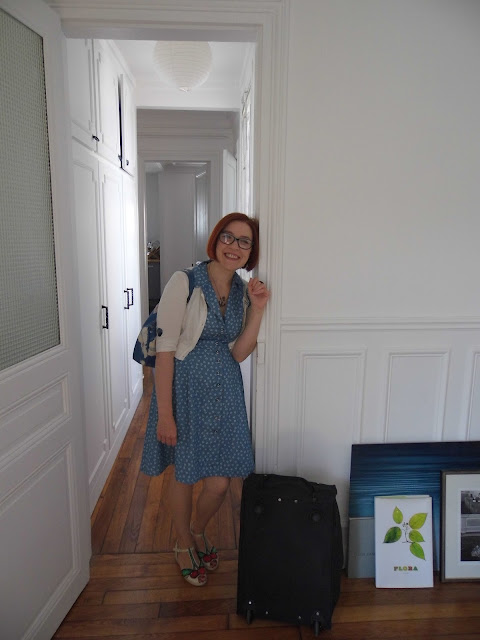 And here I am in the living room of our lovely flat, just as we were leaving to catch the bus to the Gare du Nord. What a lovely holiday!