Why are we watching a foreign movie? You'd think if it was any good they would make an American version.

Hola boys and girls! Has this week not been the longest week? I think this week has been three weeks long and it's still on Thursday night. WTF? It hasn't been a bad week or anything, just long. Some weeks are just like that, I guess.

Anyway, it's all good here. The landlord did an inspection of the flat on Tuesday and a carpenter is coming to properly fix the hole in the bathroom floor and the skirting boards. Old Smokey McBitchcrackers downstairs (yeah, I've decided that I hate her) had been smoking her head off and even though the hole had been filled in, the bathroom was still stinking of smoke. We put a note through her door asking her to go outside, as we had discussed previously, but she didn't acknowledge it.

I think this was the most annoying thing of all, actually, because it's one thing to be inconsiderate and not know that you are, but once it's been pointed out to you - well, it was just RUDE! Obviously, she didn't smoke at all on Tuesday morning because the landlord was coming, but her flat must reek and the landlord told me that she was on a warning - any more complaints or any further evidence of smoking in the building and he'd be giving her notice for breaching the terms of the letting agreement. It has worked - to a point. The smell of smoke is back (although not as strongly) as of this evening, so I'll have to see how it is over the next few days. This whole situation sucks, and although I enjoy a bit of recreational complaining, it's really not nice to have to complain about a neighbour in this way, you know? But anyway, the toilet is still working so things are a great deal improved on how they were when we got back from Paris. Phew!

So anyway, that's the craic there. Apart from being long-ass, this week has been grand. I've mostly been working from home and have been getting out for walks with Nic whenever the random weather we're having allows us to. At the weekend, I finished a knitting project that I started before we went on holiday and today I was able to get some photos of it. The project in question is another Audrey in Unst cardigan, in some hot pink Drops 'Baby Merino' yarn that I bought from Wool Warehouse: 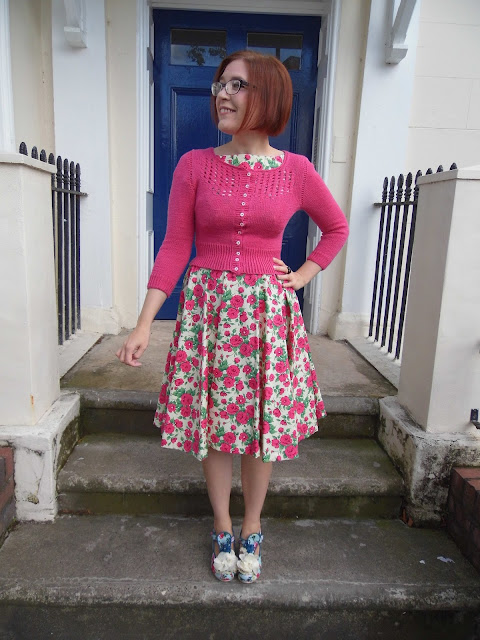 I cast this cardigan on while Nic was in Amsterdam at the end of July, but I took a break from it when we went to Paris. I did consider bringing it with me, but in the end I decided that it would be good to have a complete break. Then, when I got back, I had more to do on it than I remembered! But all the same, this time around it came together very quickly. 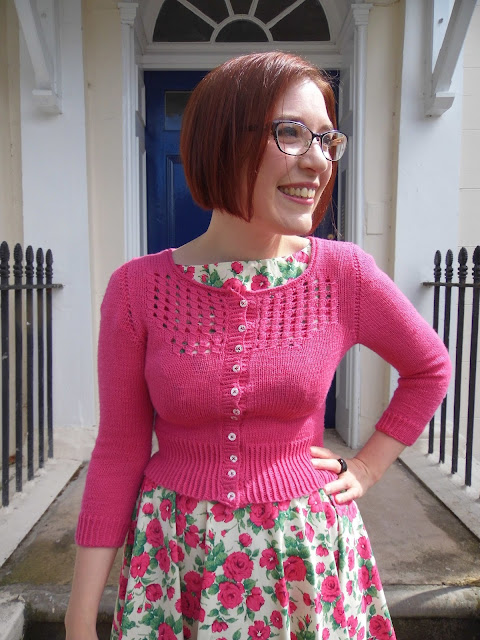 I knitted the same size as I did for the yellow cardigan, but the result is not quite as drapey. The Drops Merino yarn was very lovely to work with - soft and springy, and I love the colour. I decided to shorten the body by a few rows, although I left the ribbing the same length as specified in the pattern. The only other change I made to the pattern was just in the order of construction. After I had knitted the body, rather than moving onto the sleeves, I did the button bands and the neck binding. This is just personal preference - I have found in the past that I rush the button bands when they're the last bit to do, and this way I enjoy them a little bit more.

I was a little despondent after I blocked the cardigan though, as the fabric seemed to have lost some of its bounce. I had a little whine about it on instagram on Sunday morning but it was misdirected anger - I was really bummed out about the disgusting smell of smoke in the bathroom and the whole situation with the neighbour was making me feel really sad and angry. Nic and I went out for a walk and when we came back I sewed the buttons on and felt a lot better about it. I'm very grateful to everyone who gave me suggestions on how to put the bounce back into the finished cardigan, though! I had the buttons in my stash and I still have loads of them - I won a massive bag of them in a giveaway that Karen held a few years ago - and, in truth, they're a little small for the buttonholes. They're such a perfect match for the yarn though, and they do hold it closed! 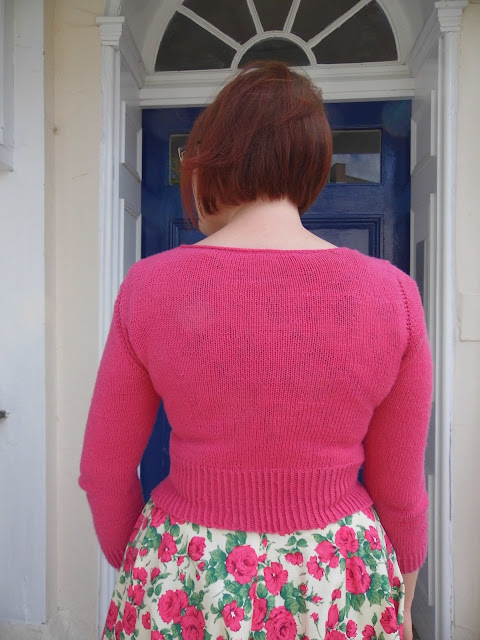 Here's how it looks from the back. Hey, that is never not weird to me. But I love the fit of this cardigan through the back!

I used some ribbon to stabilise the button band but the buttonholes were so small that I didn't attempt to do the same for that side. The buttons are very small and light, but because the yarn is still pretty fine - it's another 4-ply rather than the suggested DK - the buttons do drag a little bit when I wear the cardigan unbuttoned. This annoyed me a little to begin with but it's something that I also experience with shop-bought cardigans, so I'm feeling better about that now too. 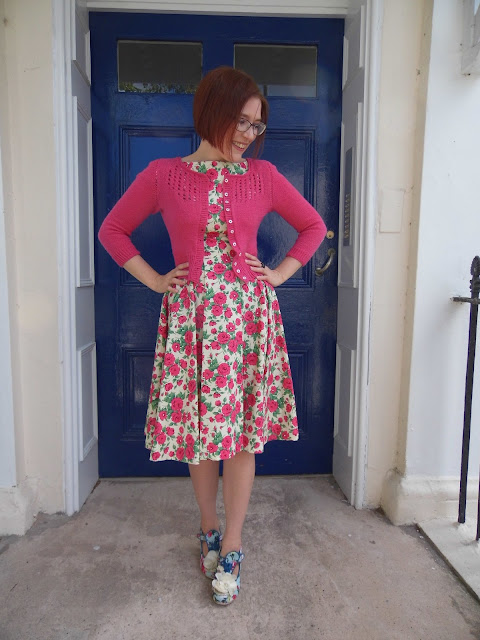 I really enjoyed knitting this cardigan - even with my minor tantrum at the end - and I'm very happy with the outcome. I am going to wear this a lot, and I'm super-happy to have found the ideal shade of pink! The pattern is a little bit fiddly to knit - I'm not sure that I like knitting seamless when it's bottom up because the bit where you separate out the front and the back is a bit irritating. When you're working up one side, the other side is flapping around. It's only minor, and I will knit another Audrey, but it's not my favourite thing to do. I'm thinking of knitting it in the recommended DK, in maybe a dark green. I just need to find the yarn!

I wore this today with a dress I made months ago, but which I never got around to blogging... 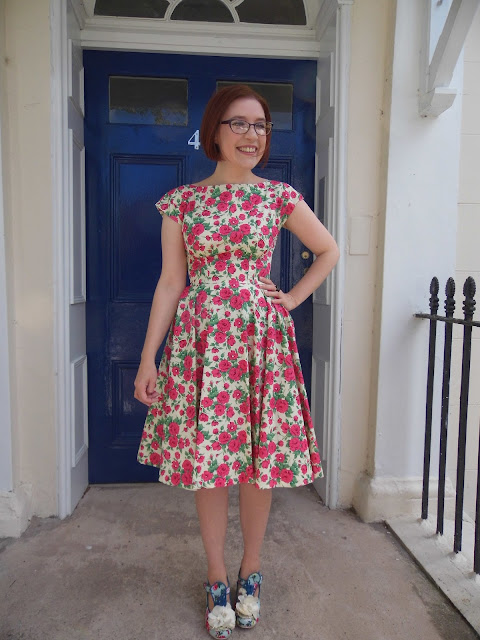 It's a By Hand London Anna bodice with a circle skirt in Liberty Carline poplin. Yes, it is VERY similar to my wedding dress! Weirdly, that's sort of the point. I do wear my wedding dress - I wore it on honeymoon, on our weekend in Bristol for Nic's birthday, on our wedding anniversary and again when we were in Paris - but it is something I want to keep for special occasions. This isn't because it's super-formal or anything - it's not - but mainly I don't want to drop food or spill coffee on it, and because I am sentimental about it. Obviously, I'm sentimental about it!

Anyway, this dress is subtly different because the roses are a different colour. These are bright pink, and the ones on my wedding dress are more of a purply pink. Seriously! I didn't realise that when I bought this fabric. It came from Classic Textiles on Goldhawk Road, and I bought it in January. The variation in colour might be down to the fact that my wedding dress fabric is tana lawn and this is poplin, but anyway. The colour is different. IT'S A DIFFERENT DRESS TED, IT'S A VERY DIFFERENT DRESS. IT'S A DIFFERENT SHARK.

So yeah. This dress didn't seem to warrant a post of its own and also, I never got around to getting photos of it, but it does go perfectly with this cardigan. BOOM. It's probably silly, but I do really enjoy the fact that I can pair up my handmade dresses with handmade cardigans and knitting has become a little bit addictive. Since finishing this cardigan on Sunday, I have already cast on another cardigan. It's useful for me to have a variety of colours and styles available but it is getting a bit out of hand now. It took me a good fifteen minutes the other night to put all of my cardigans away. It might be time to start some unselfish knitting.