Analyse, Strategise, Succeed. A.S.S. I'm going to crush this problem with my ass.

Hello hello! It's a chilly Tuesday here and I have had a tiring day, but I am looking out of our living room window at a pretty pink sky and Nic is cooking something that smells delicious. So that's good.

I have had a mentally and emotionally exhausting couple of weeks. My ten-day work week finally came to an end with a two-day-long meeting (we really know how to have fun where I work) and on Thursday morning, Nic and I travelled down to Folkestone so that we could go to his grandfather's funeral, which was Friday. I was nervous in anticipation of the funeral and so was feeling a bit emotionally wobbly anyway, and then on Wednesday morning I received the very sad news that my cousin Angie had died the day before. This was very shocking and very sad as Angie was only 36. She had suffered from health problems in the past and was very seriously ill a few years ago, but nonetheless it was a horrible shock to lose a family member, and one so close in age. Angie and I weren't close - I have a large extended family and am not close to most of them - but we had been as children and, as I say, it was a very great shock to lose someone of my own age in that way. Funerals are arranged much more quickly in Northern Ireland than they are in England, and it turned out that Angie's funeral was also on Friday.

Nic's grandfather's funeral went very well and it was an oddly uplifting day - he was 92 and had had a very varied and satisfying life, and his funeral was a fitting tribute to the man he was. Nic, my dad and I were determined to make the rest of the weekend as positive as we could to help raise Nic's parents' spirits, and we ended up having a very lovely weekend. Friday was very rainy and grey, but on Saturday and Sunday the weather was glorious and we made the most of the beautiful Kent countryside and coastline with a trip to Rye followed by an evening on the Folkestone Harbour Arm on Saturday. We came home on Sunday feeling a bit overwhelmed and exhausted, and I spent yesterday feeling pretty out of sorts, but now September is almost behind us I feel like I'm getting onto more of an even keel.

Aaaah. So that's the craic with me. That was a massive emotional blob, and I know that lots of you are mostly here for the sewing. I do have some sewing to show you, finished a few weeks ago and before life all went a bit mad. This is a dress I made from some of the fabric I bought in Paris. I ended  up going a bit wax cotton mad when I was there because I am powerless in the face of the amazing prints and because it's so lovely to sew with. I bought two lengths of Julius Holland wax cotton for myself from Toto Tissus on rue Clignancourt (and one length for my friend Lauren) and this dress came from one of them: 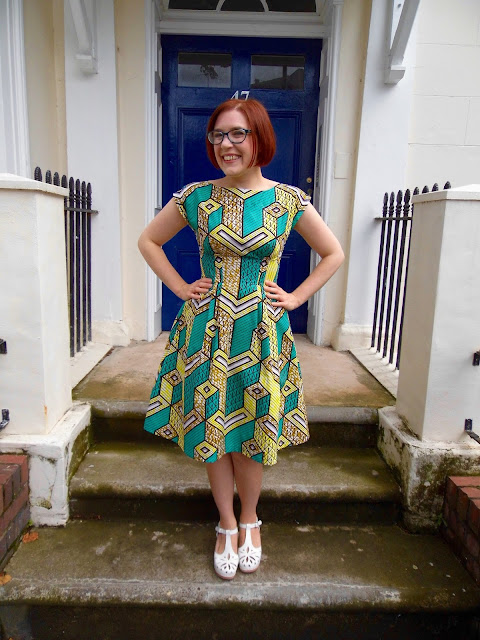 So, tell me. What do you see when you look at this print? I saw buildings, but Nic saw faces. I see faces now too, especially as I have a face on my upper chest! I promise, though, that this was deliberate. I spent as long cutting this dress out as I did sewing it, I think. The print actually runs with the chevron shapes more like L-shapes, so I cut this dress out on the crosswise, and I paid careful attention to where I wanted the chevrons to be. That might seem strange, but it seemed a waste of such a distinctive print not to showcase it on the most unbroken part of the bodice, so I ended up with a face on my bust. Hey, at least it's a smiling face though, right? And it's not like I haven't gone there before (*cough* stag boobs *cough*).

Because the print is so great, an Anna dress bodice seemed like the best way to show it off. I did wonder if there was too much going on with the bright green and yellow so close to my face, but all the same I thought that the slash neck variation would work better than the v-neck. I managed to achieve a little v-neck trompe l'oeil effect though with the print, though: 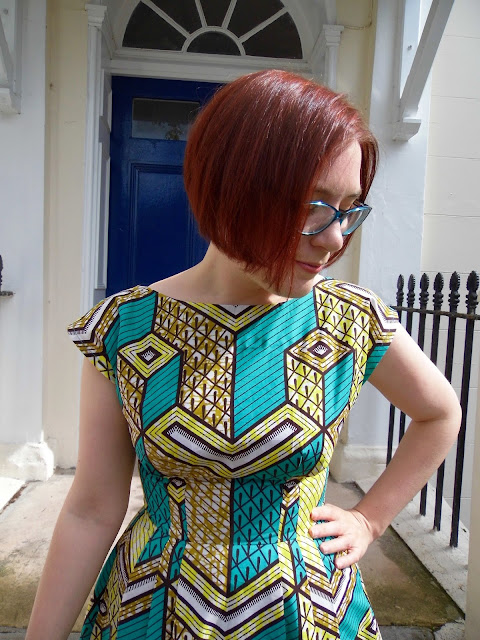 Because I was cutting on the crosswise grain and there is very little drape and no stretch to wax cotton, I used a slightly smaller seam allowance on the bodice side seams. It was a small amendment, but it made a nice difference - the bodice is close-fitting, but not overly tight. My preference is for the bodice of my dresses to be fit with minimal ease, and that's not to everyone's taste. Still, it's worth bearing in mind that you might need to give yourself a bit of extra breathing room if you're cutting a bodice on the crosswise grain. 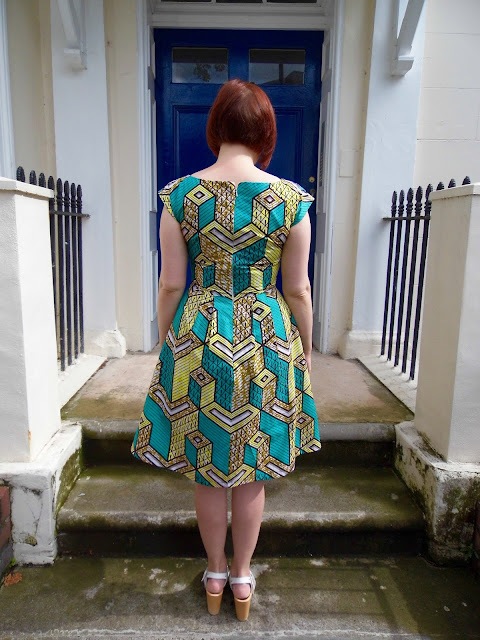 Here's a massively awkward photo of my back to illustrate that I have a happy face there, too. You'll see some wrinkling across the back, which is partly due to the fact that the bodice is very fitted.

Other than the little bit of extra thinking that cutting this dress out took, this was a breeze to sew and a joy to wear. I think I could sew the Anna bodice in my sleep by now, probably!

I wore this dress for the first time a couple of weeks ago on a day when I was working from home. I had just got this pair of Swedish hasbeens in the post, bought in the final days of their summer sale for a ludicrous £49. It's a style I had been stalking all summer, so even though I could only wear them a few times before packing them away for the season, I didn't think twice about buying them. In real life, I think they're sort of ugly, but as I quite like ugly things (see also: this dress, almost everything else I have ever sewn) I was happy enough: 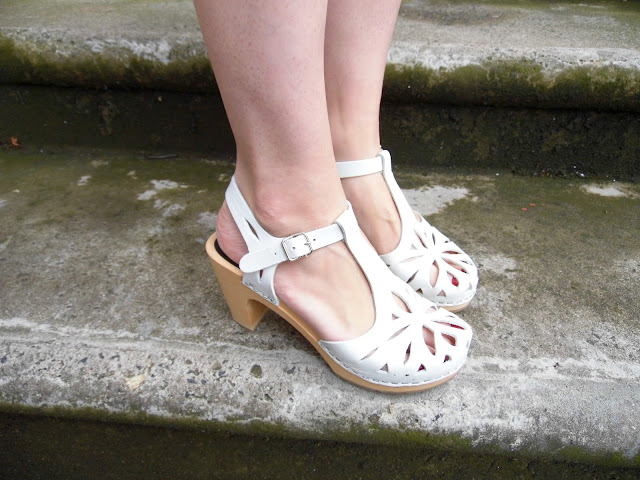 I don't think I'll be packing the dress away for the colder weather, though, as I think it'll look good with dark tights and shoes, or with my yellow shoe-boots.

Normally I really dread the onset of autumn and winter, but this year I don't feel that way. Don't get me wrong - I love the summer - but I see a lot of promise in the coming season, and that is a nice feeling. Having a few final days of summer this past weekend in Kent helped with that, I think. 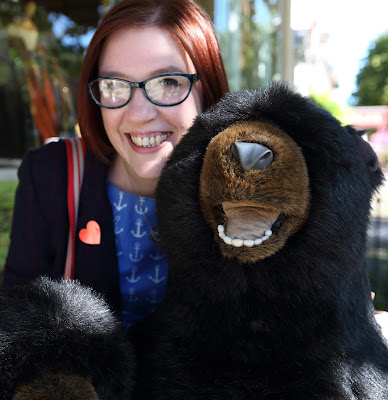 On Saturday we went to Tenterden, and then on to Rye. Daddy took this photo of me with a stuffed bear outside some sort of sporting goods shop. Then after that, any time he saw a bear in a shop or even a photo of one, he tried to get me into a photo with it. He's an eccentric man, my dad. But I like this photo. It makes me want a DSLR. 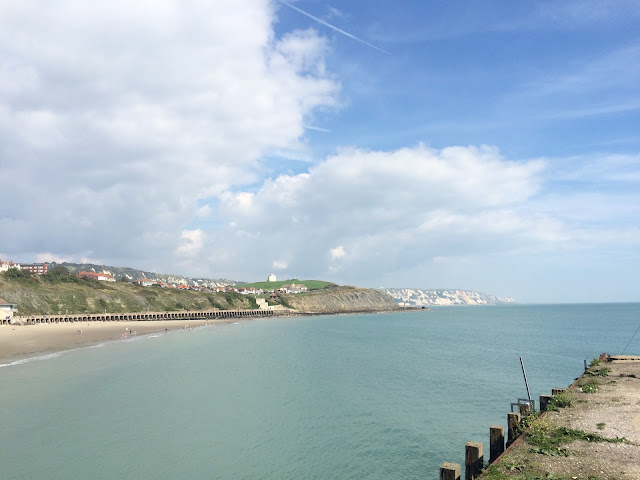 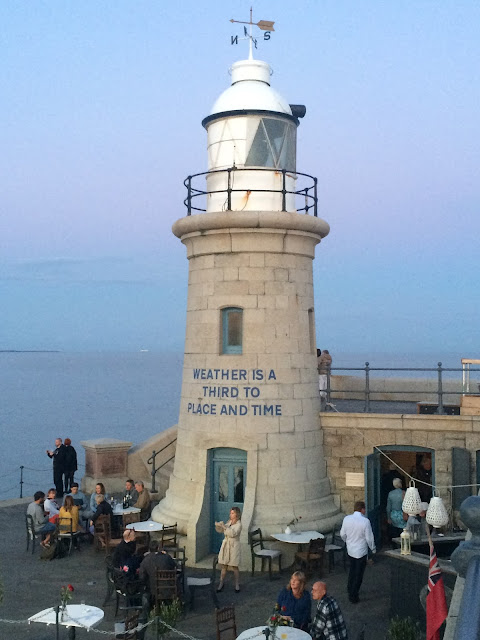 Folkestone's Harbour Arm opened to the public on the 8th August and it's a real asset to the town. It has been regenerated with places to eat and drink, and all sorts of activities. Nic and I were staying with our friends Dan and Vic on Saturday night, and we met them down at the harbour arm for drinks. This lighthouse is home to a champagne bar. When Folkestone Harbour closed as a passenger port in 2001, I think the lighthouse fell out of use too, so we were surprised and delighted to see it lit once again on Saturday night. Saturday night was very special. We arrived at the Harbour Arm in time to see the sun setting, and spent a few hours drinking champagne with my dad and our very dear friends. It was oddly emotional to watch the beam from the lighthouse circling the harbour, and to see the lighthouses at Dover and Dungeness twinkling away in the distance. It was a very beautiful evening indeed. 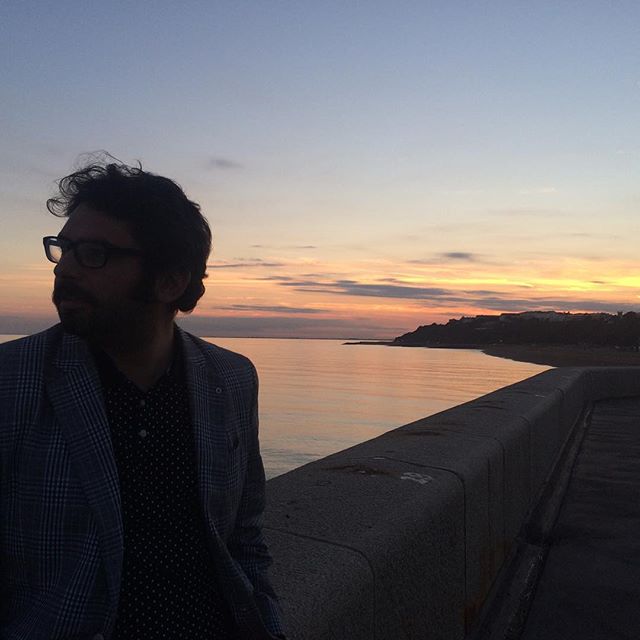 Here's Nic at sunset on the harbour arm. Behind him you can see the Leas and Sandgate, and further round you can see some of the coastline of Kent and East Sussex.

Wow, that ended up being quite the random photo dump! Well done for sticking with it to the end there, guys. Thanks!

Right now, I must go. I have another all-day meeting at work tomorrow (my life: what is it) and I need to put in some quality time with my knitting and my sofa and my TV. Oh, I know, ambitious, right? I'm going to leave you with one more photo of my dress though because, you know, sewing blog. Goodnight! 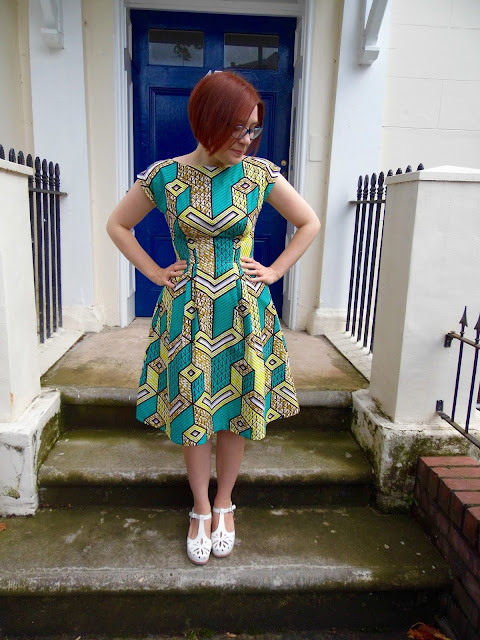 My face is smug in this photo because I was pure loving my hair. That happens pretty rarely!
Posted by Roisin Muldoon