I don't understand the question and I won't respond to it.

Hello strangers! It's been a while, yeah? It's been a difficult week or so. Nic's grandfather died suddenly last week and... well, yes. That's been very sad and very difficult for everyone. He was a great age and thankfully hadn't been seriously ill, so although it was a great shock at least it wasn't the case that he had been suffering. His funeral won't be for a little while yet so I think the next couple of weeks will be similarly difficult. Ahhh, I tell you what, being a grown-up is pretty hard sometimes.

So, anyway. That's what's been happening. I've been busy at work and trying to squeeze in crafting and general life around that. Weirdly, when I'm busy elsewhere in my life I become a bit better about making time for sewing - I suppose because I need it more for my sanity! I've made a few dresses and I've made great headway into knitting another Agatha cardigan, so that's good.

Last week, I cut into the first piece of the fabric that I brought back from Paris and I made another Vogue V8998. The fabric is pretty amazing. It's a printed cotton that I bought from Moline, which has gold foil in the print: 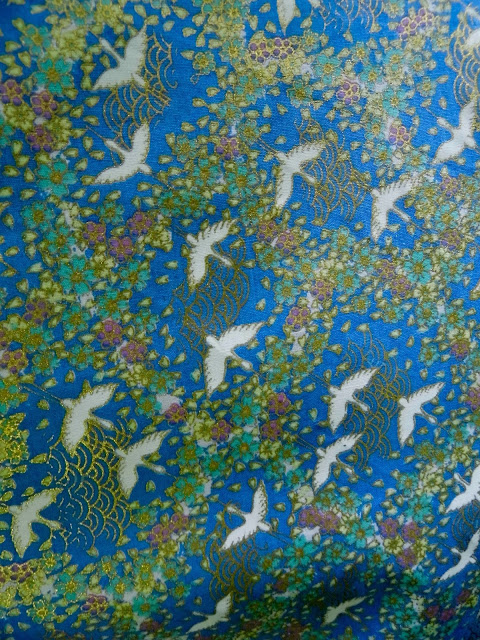 Birds, flowers and gold foil. This has a little bit of everything going on! The selvedge says 'Japanese 40s by 40s superfine cotton lawn' by Miroto Great Flower Designs, just in case anyone wants to try to track some down. They also had it in pink, which I kind of regret not also buying. I'm not sure what the birds are, possibly cranes? Anyway, it was very pretty and I immediately envisioned wearing it with gold or silver shoes.

I initially thought about making another Emery dress with this but when the time came to cut into it, V8998 presented itself, so off I went. I've tinkered with the fit of the bodice of this dress each time I've made it, and this time around I decided I needed to shorten the bodice. This was a good idea, but I think I still need also to shorten the shoulder seams and maybe pinch a little bit out of the neckline. Hmmm... 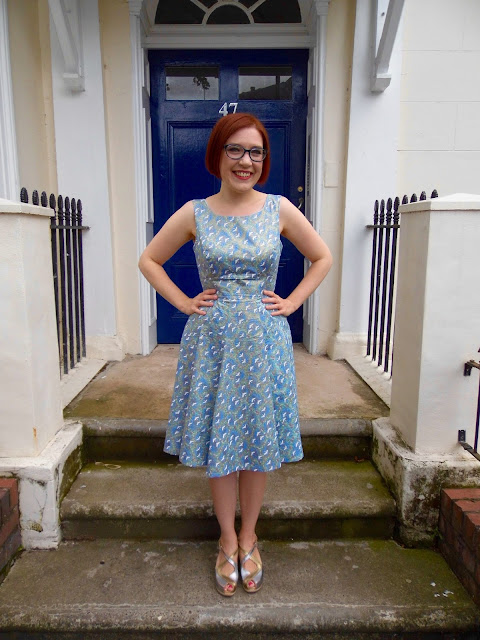 I have to be upfront and tell you that this dress was absolutely horrible to photograph. I wore it on Saturday and I don't know if it was bad lighting, or the fact that the gold foil reflects badly or what, but Nic seriously had to take about 3000 photos just for me to get four or five that I didn't totally hate. Needless to say, this meant that I was an absolute delight to work with! You'll just have to take my word for it that this is much cuter - and much, much less wrinkled-looking - in real life! Even if you don't (which, fair enough, I could be totally fully of shit) once I got over my tantrum about the photos, I did enjoy wearing this dress! 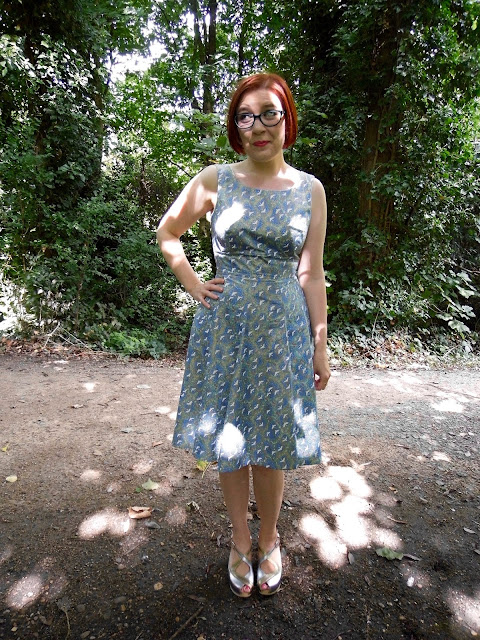 The fabric, while pretty, was kind of a pain to work with. Even with a press cloth, it was difficult to press the seams because of the foil. This has probably also contributed to the wrinkled look! I can only hope that washing it a few more times will make it easier to iron, even if it makes it look a little bit less shiny. Maybe I don't actually regret not buying the pink version of this, come to think of it!

Isn't it funny how your feelings about a project can change, though? I loved this as soon as I finished it, and then was totally raging when I saw the photos... and now I'm not sure. I'll wear this dress, but it's definitely not by best work. Anyway, I think it looks good with my pink Audrey in Unst cardigan... 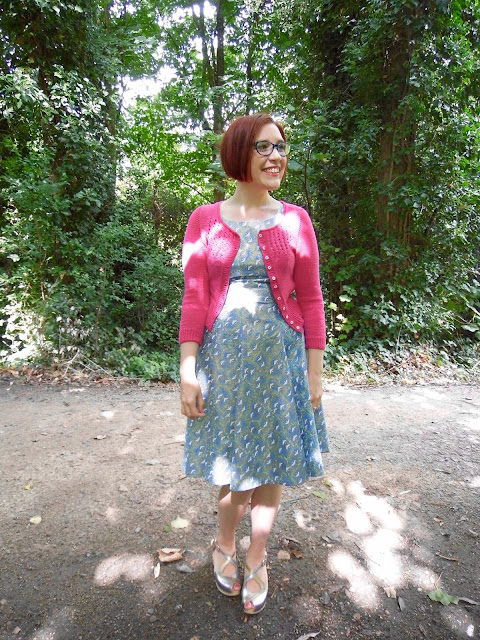 Who is more awkward than me, then? LITERALLY NO-ONE, THAT'S WHO.

I wore this on Saturday to go down to Leamington Food Festival with Nic, Amy and Barney. We pottered around trying to find the vegetarian options for a while before Nic and Barney went record shopping and Amy and I went up to Berylune to bring Emily and Amy some banoffee toasted sandwiches. It was a pretty nice day, so my dress already has lots of lovely happy memories attached to it.

So anyway, that's the craic there. I've had a busy day at work, and my brain has sort of run out of words. I need to go and knit and watch some trashy TV! I'll catch you soon, though. Since making this dress, I have sewed two more dresses that I feel much more positive about, and which I can't wait to show you! You can see a preview on my instagram if you're curious.

Now. I have to crack on with my second sleeve and with binge-watching The Good Wife. Yes, five years after everyone started watching it, I've finally moved past my irrational hatred of Juliana Margulies and got really into this show. Look, it is actually kind of awesome. Carol Hathaway totally sucks in S1 of ER but, subsequent to that she's awesome, and Alicia Florrick is okay too. The star of the show is really Christine Baranski though. I could have a drink with Diane.