I had bread. I had cheese. I had an iron. What was I supposed to do?

Hello! It's been a little while, hasn't it? To tell the truth, I have been feeling somewhat melancholy recently. Nothing major, maybe it's just the ever-decreasing daylight hours or the fact that some unsettling things are happening at work. They're unsettling for both good reasons and otherwise, but yeah. I haven't felt much like communicating, although I have been sewing and knitting. Anyway, none of this is by way of an apology, I'm sure no-one had the search and rescue out... but, also it feels a bit weird to blog after weeks and not mention the fact that it has been weeks, you know?

Despite the melancholia, life has been actually pretty good. A few nice things have happened in recent weeks, I've had some fun days out and I bought a pair of silver brogues, so that was cool too. And hey, I have a dress to show you guys this evening. It's not such a new dress now - I made this at the beginning of October to bring on holiday to Germany, and managed to get some photos of it while we were in Heidelberg. It's another McCalls 6696 because I love that pattern, but also because I bought the fabric with that dress in mind.

So, the fabric in question is some cotton that I bought in La Droguerie when Nic and I were in Paris in August. Shopping in La Droguerie was a little bit intimidating because even though I could hear other customers speaking to the shop assistants in English, I really wanted to complete the transaction in French and then I became completely tongue-tied! I managed it though, and I also managed to get away with sneaking a photo in the store, which is apparently completely forbidden. I'M SUCH A REBEL. The fabric in question is this... 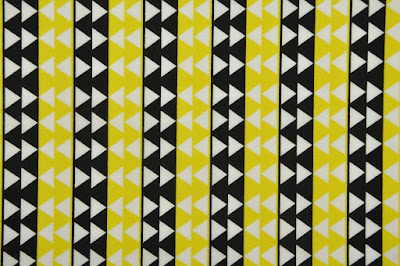 In the shop, they had a shirt-dress made from this fabric and, you know, once I had seen that combination I wanted it. So I bought what was left on the bolt - which I think was about 2.5m - and I scurried away out of the shop. I think it was €18 or €20 per metre and I'm afraid it didn't have any information on the selvedge. It's of a lovely quality and the next time I'm in Paris, I will be straight back to La Droguerie to buy more of their fabric. Well, providing I can talk to the people in the shop, of course.

It took me a while to get around to making this dress, mainly because I was pissing about trying to find the perfect yellow and black buttons. I didn't find those - I should have bought them in La Droguerie - but I did end up finding some nice black ones in Leamington instead. I sewed the dress over a few nights and had a grand old time doing it too. I love M6996. It's such a satisfying pattern to sew. 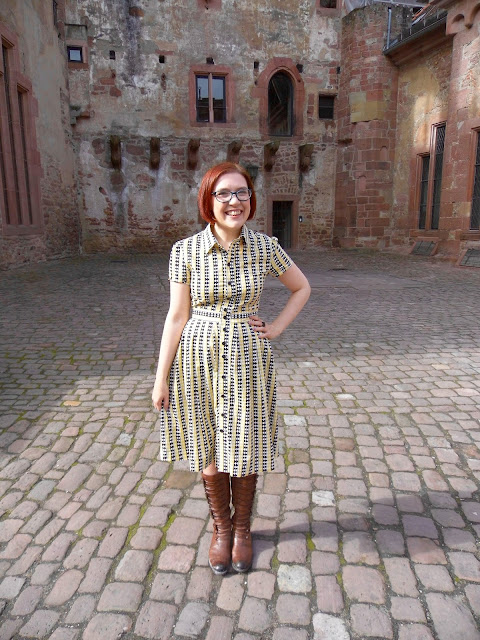 I'm a wee bit all over the map when it comes to this dress. In theory I love it, and I am very happy with the finish and the fit. In person, I'm not sure if sewing a version with sleeves was a mistake - maybe the sleeves are a bit too much? Like most of my dresses, I think I look better in it with heels, so there's that too. I wore it with these boots in the photos because they were perfect for a day of walking miles around Heidelberg, and actually I think they do look okay with it too. 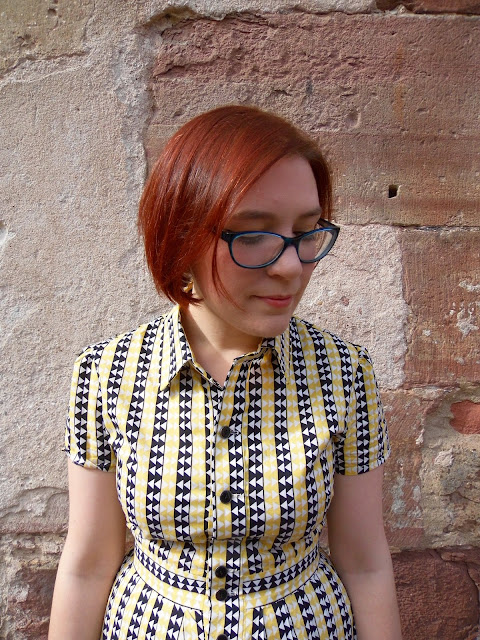 I took time cutting the fabric out to match the stripes as best I could. I forgot to get a photo of it, but they match really nicely across the back yoke and the back bodice, and I'm happy with how they match from the bodice to the skirt. I'm also pretty fond of the way in which the stripes look running horizontally across the waistband. I sewed horizontal buttonholes this time, rather than the vertical ones marked on the pattern. I gave this some thought and did a little bit of reading around it. I do think it makes a positive difference on this pattern - there is no pulling or gaping across the bust, and I think that's partly down to the buttonholes. It didn't take noticeably longer, either, although it does take a little bit longer when I'm getting dressed because I'm so used to buttonholes going in a different direction! 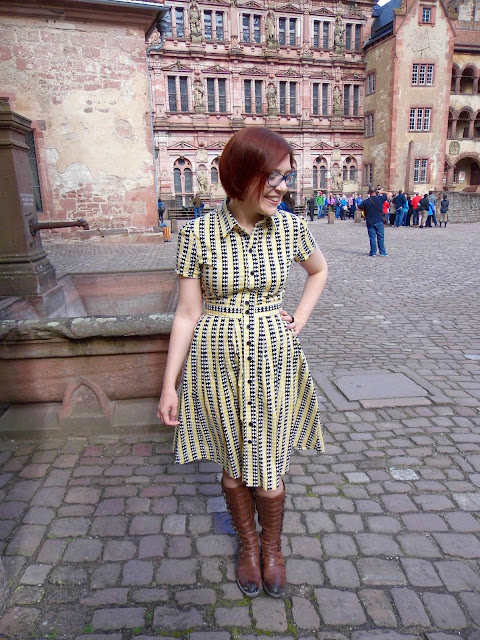 All in all, I'm calling this a success. I've been drawn to more graphic prints like this recently when I have been fabric shopping, so I shouldn't really find it strange to see myself in them! I'm still on the fence about the sleeves, though. I'm going to live with them through the autumn but could always take them off in the spring if they continue to bother me.

Here's a closer look at my boots, too, for those of you who are interested in my shoes. I bought these in a random shop in Warwick at the end of August and they were a ridiculous £35. They're pretty cute but something about flat brown boots just screams middle-class mum in a White Stuff top and gilet at the school gates to me. Which, that's fine, but it's not really me. Anyway, I bought them because they're practical and I have a suspicion that we're in for a hallion of a winter. And they are cute, in fairness. 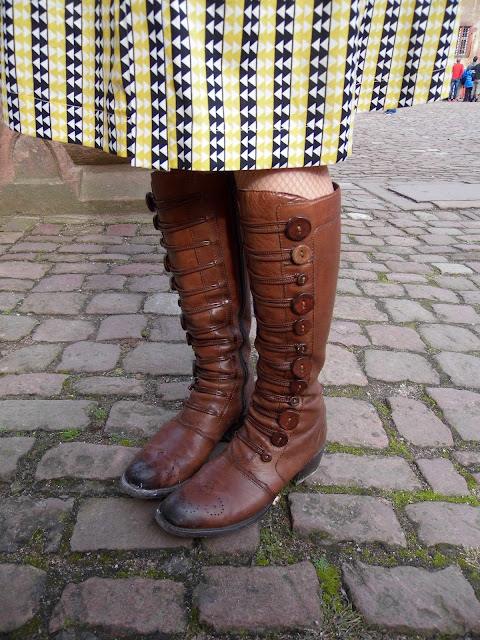 They were certainly practical. We did a lot of walking in Germany and they were a good companion throughout that. On the day we took these photos, Nic and I spent the morning at Heidelberg castle and the afternoon exploring the town. The castle was a lot of fun. It has a couple of very large wine barrels - one of which is rumoured to be the biggest one in the world. It IS pretty big, you guys. 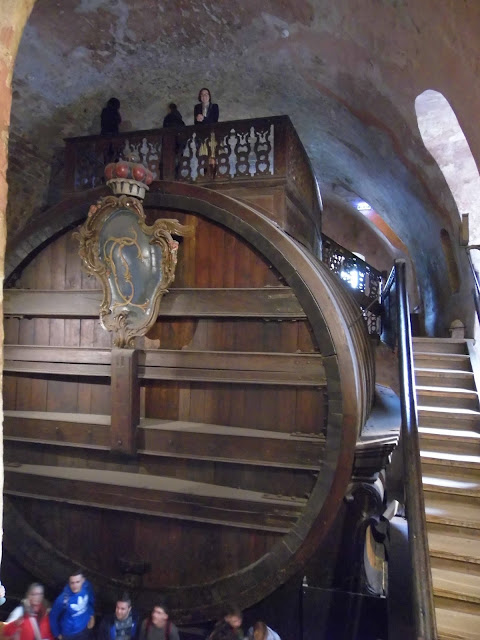 That's me there on top of the wine barrel.

There are lots of vineyards in the area and in the castle vaults you can do local wine-tastings and you can also print up your own personalised wine labels, which was pretty cool. 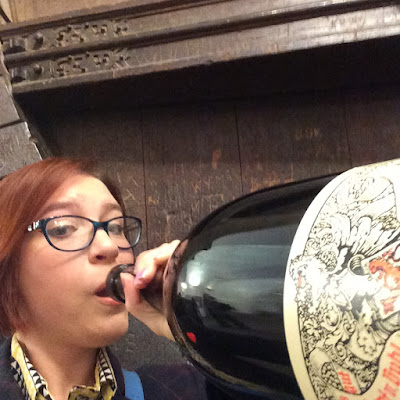 No, I'm joking. That was a prop! I loved that they put props out so that people could take stupid photos with massive wine bottles in front of the giant wine vats. That's a classy move, you have to admit.

The best thing about the castle was the amazing views across the valley and of the river Neckar. We were very lucky to see the castle in two different aspects - on the day we arrived it was shrouded in mist, and on the day we visited it was sunny and clear. 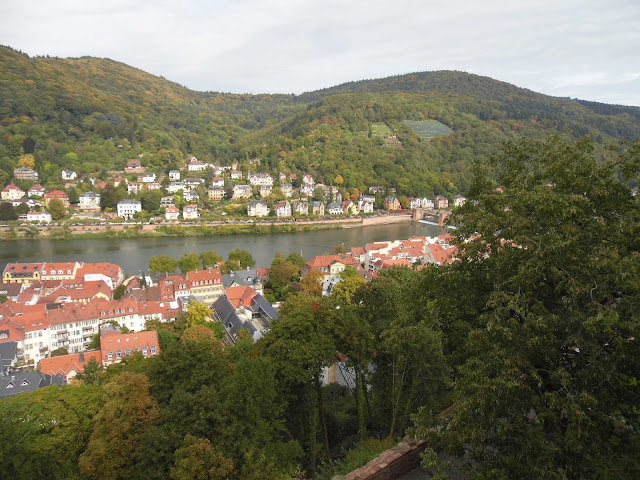 Some of the castle is in ruins and we weren't able to see much of the inside of it. The courtyard and the grounds were more than enough to keep us entertained for a few hours, and we had lunch on the terrace. It was fab. 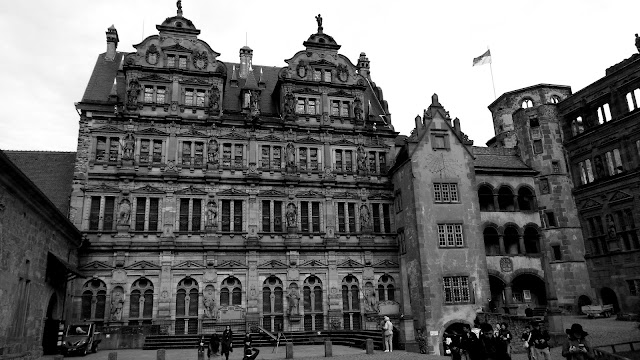 Directly in front of this building, there are some benches set up as a photo spot. It's actually pretty cool, and we were able to see lots of people having their holiday photos taken there. I think there was also a fashion blogger getting some outfit shots taken too, which was fun to watch. From a distance, of course. 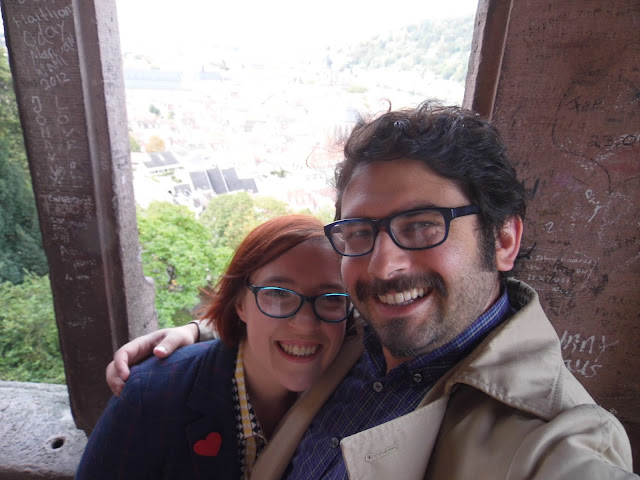 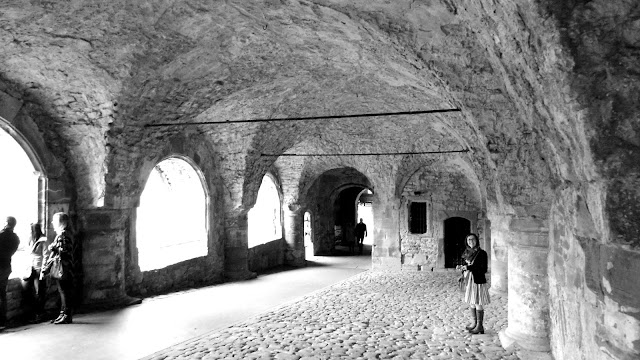 After spending the morning at the castle (and having lunch there) Nic and I whiled away the afternoon exploring Heidelberg. I bought gin and records, and we drank beer and ate pretzels. It was a good holiday.

So, that's the craic there. Even if I feel a bit conflicted about my finished dress, it certainly has lots of very happy memories attached to it now. 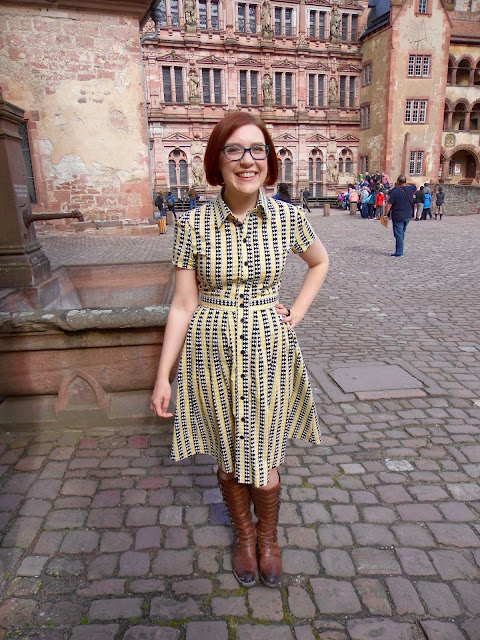 Okay now, I need to go. I am really hungry and dinner is ready. And it's finally Wednesday night, which is good, because this week is going SO SLOWLY. Ugh.

Thanks to Lauren, who sent me this gif when I made this exact same complaint to her last week.