Hello everyone! Well, it has been a while, hasn't it? It has been a particularly busy few weeks at work and socially. It felt like I had only been back from Glasgow a nanosecond before Nic and I were on a flight to Belfast, and after that I was in London for the best part of a week for work as it is All-Day Basement Meeting season again. This year there's been a new twist - we had one day above ground, but it wasn't much better. It was like sky prison. So, that's a thing.

In truth, it's been a weird couple of weeks. Nic and I had an amazing weekend in Belfast - we had gone back to see The Divine Comedy playing a gig, and we were joined by my parents, my best and oldest friend and her friend Mary. The weekend was wonderful - full of laughter and fun, but it was exhausting and getting home from it only to have to go straight to London was pretty hard. On Tuesday, my granny Muldoon died and on Wednesday my four-year-old nephew Eoghan broke his thigh and was taken to hospital. He'll be fine and apparently it's a relatively common injury in someone his age - there are three other little boys in his ward with the same injury - but it's still been a tough week. I was on my own in London when I heard that Granny had died and it was a very strange experience. We haven't had a relationship at all for the last eight years or so and weren't close at all before that, so it's not the case that I have lost a dear relative. But, in its own way, that's just as complicated and rubbish a situation, you know? I'm glad that I had spent the weekend previously with my dad and I'll be seeing him again in a few weeks.

So, that's what's new with me! After all of that, I took Friday off work and spent it mooching around with Nic and by sewing. I spent today sewing, too. It's been good to be back at my sewing machine and it's very soothing and healing to make things, isn't it? I have an ever-growing backlog of sewing projects to share with you, but I also have a growing backlog of knitting to blog about too! I'm going to do this slightly out-of-order though, just because.

My lovely friend Lauren has got the knitting bug in a bad way too, and she made herself an amazing red Andi Satterlund Chuck sweater recently. It's the same shade of red as my red Agatha cardigan and it's totally awesome. So, monkey see monkey do. I decided to have a crack at it myself. Not in red, though, because we'd look like twats if we were out and about in them at the same time. I wanted a green one. So, I ordered myself some Cascade 220 in Christmas green, and off I went. 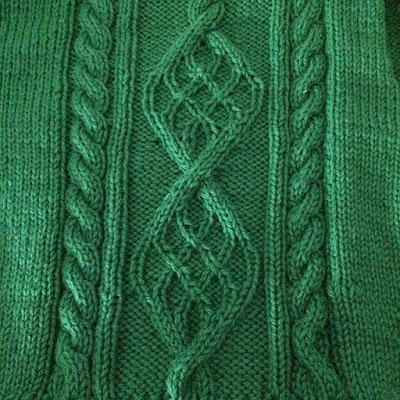 So, Chuck is a cropped jumper. It's seamless, knit from the top down and it is mostly in stocking stitch apart from a cabled panel down the front. I wanted to give cables a try after the failure of my Marion cardigan earlier this year, and I'm glad that I did. This jumper was so fun to knit and I really loved the cabling. 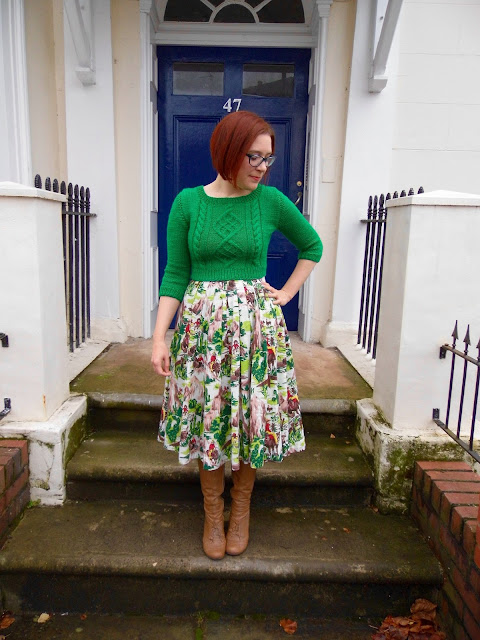 I knit the size small and made no alterations to the pattern and I am really pleased with the fit. It is pretty cropped, and I think that some people may need to add a few rows of length to it, but I have a high waist and I find it hits me exactly where I like knitwear to. 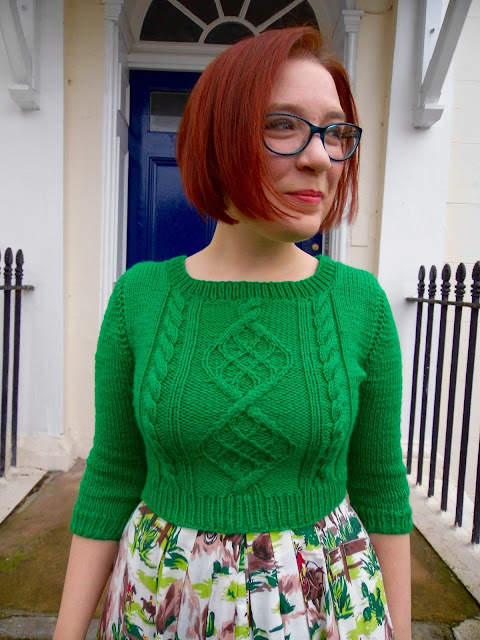 I really love everything about this jumper and I have worn it loads since I finished it. This surprised me a little bit - I mean, obviously I thought I would like it or why else knit it, but I've never really been much of a one for wearing jumpers (outside of the house, that is, I have an amazing jumper that I wear at home when it is very cold). The fact that it is cropped makes it easy to wear over dresses and I think it is just as cute as a cardigan.

I think that this jumper does look quite obviously hand-knit. I know that, for a lot of people, wearing something that looks obviously handmade is undesirable. I sort of feel that way about sewing, but I also feel like the rules are slightly different with knitting. Maybe they're not, and I'm only kidding myself because I am so proud of my jumper. Maybe I'll look back on this in a year's time and cringe at it. Who the fuck knows. Right now I am very happy with it. I'm wearing it right now, in fact! 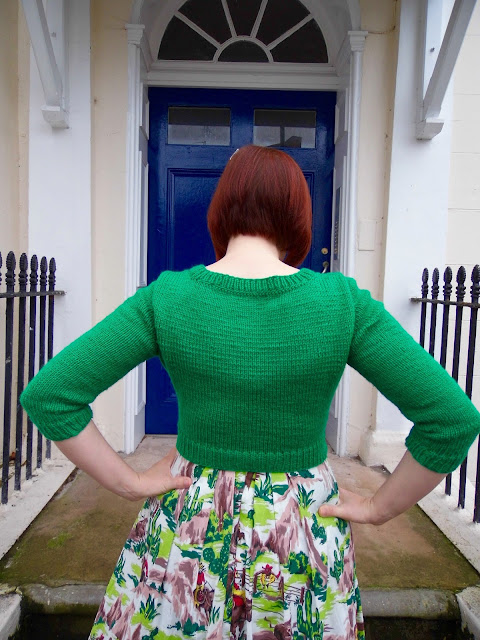 Here's the back view -  I really like the way this jumper fits through the back.

As with all of Andi Satterlund's patterns, the Chuck pattern is easy to follow and it was really enjoyable to knit. You don't get time to memorise the cabling repeat because it's so large, and you only do it twice, but that's not a problem. I think I prefer lace knitting to cable knitting, but it was very satisfying to see the pattern coming together. 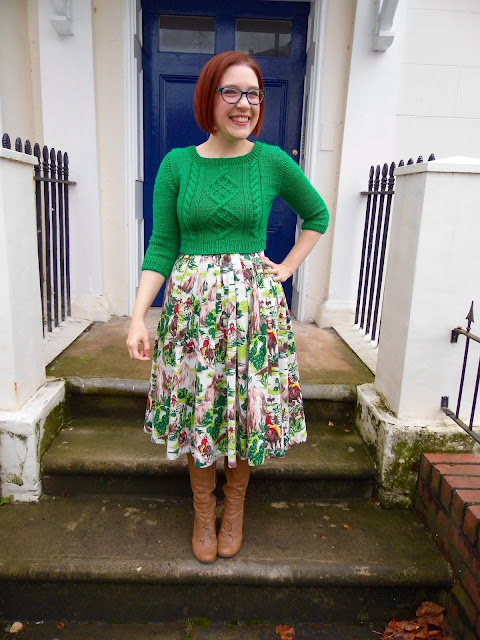 I've bought some gorgeous blue malabrigo worsted yarn for another Chuck but I must admit that now that I am into jumpers, I am tempted by the Aiken pattern. Yes, I know that there are other knitwear designers out there but I'm not even sorry - I love these Andi Satterlund patterns!

Anyway lads, I'm going to wrap this up here because I need to go and make the dinner and I have today's dress waiting for a hem as well. And gin - I have gin to drink! Have a lovely weekend, everyone!